Declining consumption, changing consumer tastes, concern with health and wellness, and the ongoing popularity of craft challenged major brewers to reinvigorate established brands with new taste and zero-alcohol options. Anheuser-Busch InBev (ABI) worked to manage its portfolio of over 400 brands, in the first full year since the merger with SAB Miller. In this pressured context, the beer category rose 3 percent, following a 5 percent rise.

Brewers added more drinking occasions, attempting to pair beer with food and appeal to more women drinkers. They introduced more premium offerings for consumers who, while drinking less, were willing to spend more for each beer consumed. For younger drinkers less inclined to drink alcohol, brands tried to formulate alcohol-free options with a genuine beer taste.

The proliferation of craft brands prompted several strategies for managing the tension between authenticity and scale. Having acquired many craft beers, ABI generally preserved its independent management. Many US micro brewers joined an association and displayed the organization’s seal on their packaging to confirm authenticity and differentiate from mass craft beers. In a recent development, equity players purchased local craft brewers. 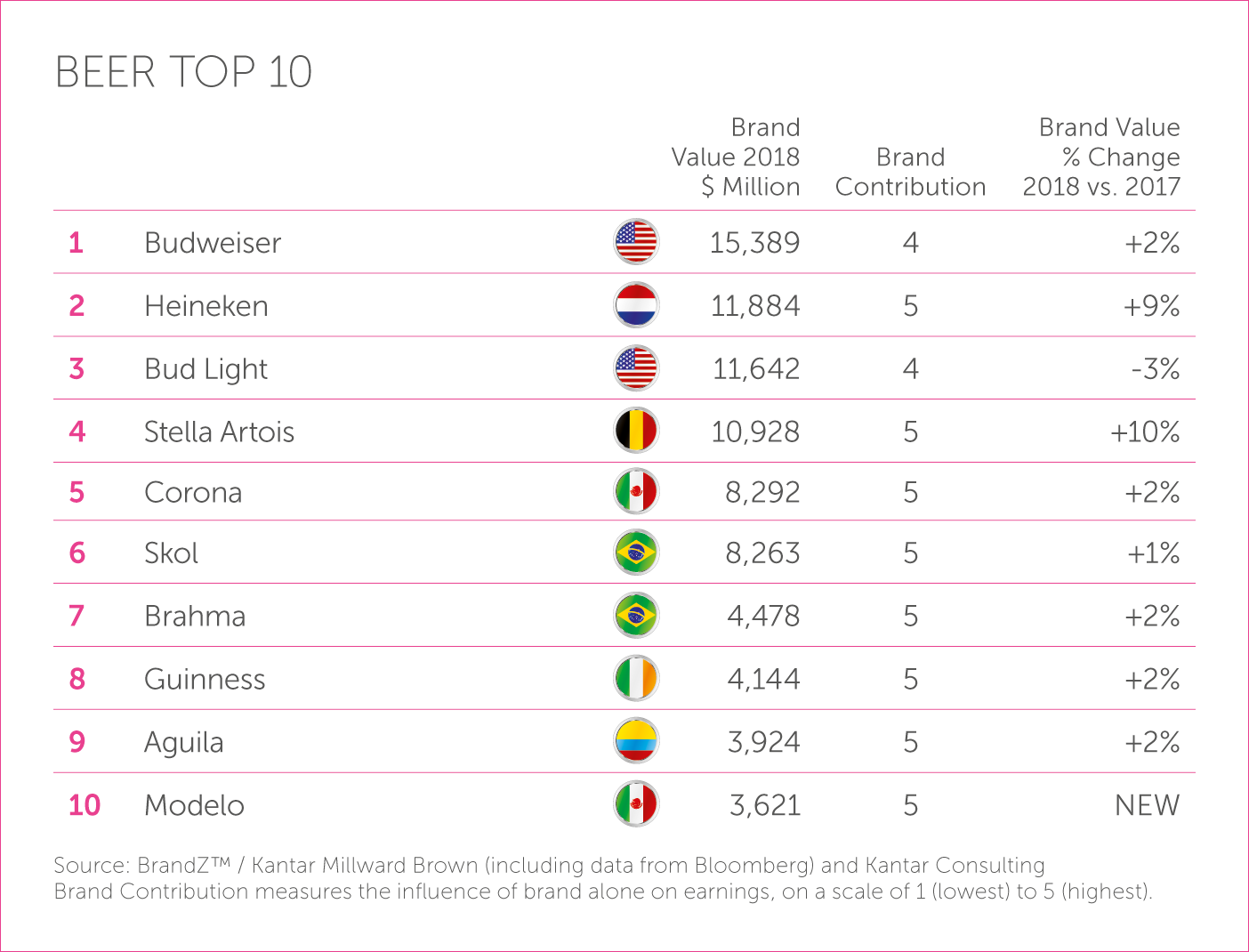 The addition of more taste options and the proliferation of craft created more congestion at the retail shelf and a desire to rationalize the range to make it easier for consumers to shop for beer, while satisfying the needs of brewers, wholesalers, and retailers. But the expected expansion of retail private label brands suggested the shelf would get even more crowded.

Changing tastes accounted for the decline of light beers, in the US, with Bud Light dropping one spot in the BrandZ™ beer category ranking. The entrance of Modelo into the BrandZ™ Beer Top 10, and the MillerCoors acquisition of the US marketing rights to Sol, reflected the changing tastes of American beer consumers, and a preference for Mexican beers.

As brewers adjusted to changing consumption habits and taste preferences, some of the greatest threats to beer come from outside the category, including the growing popularity of hard lemonade and, in the US, of flavored malt beverages (FMBs), alcoholic drinks that are brewed like beer but typically have a fruit rather than beer flavor.

Zero-alcohol brands gained traction in the UK, publicized during the country’s “Dry January” ad campaigns. Drinkers looking for beer with no or low alcohol could choose among Heineken 0.0, Budweiser Prohibition Brew, and Guinness Open Gate Pure Brew. ABI has announced a goal of having 20 percent of its volume no-or-low alcohol by 2025. Along with introducing beer with no-or-low alcohol levels, brewers introduced premium brands for the occasions where drinkers do consume alcohol.

Well established in the US, craft grew in popularity globally among young people in London and other cities. ABI increased the distribution of Goose Island. The Chicago-based craft beer purchased in 2011, is now available in much of the US and overseas in several European markets, including the UK, and in China and South Korea.

In addition to ongoing demographic changes pressuring major brands and driving the growth of craft, Brewers in the US, expect the legalization of marijuana to influence beer drinking. Some brewers and alcohol producers are exploring marijuana-flavored beers. Constellation Brands, which distributes Corona in the US, bought a stake in a Canadian marijuana company.

While Budweiser contended with craft beer and other competitive challenges in the US, the brand performed well abroad as a premium import. Introduced for the holiday season in the US, Budweiser 1933 Repeal Reserve celebrated the repeal of prohibition, which occurred 85 years ago. Budweiser partnered with Lyft in New York City to drive people in antique cars as they sampled the beer.

ABI has established a small group called ZX ventures to identify emerging consumer drinking preferences. The company has been acquiring beer-related apps, about tasting and drinking locations, for example, to identify new flavor profiles and other beer trends. ZX also purchased a couple of home brewing supplies companies that sell beer ingredients online and provide a window into beer e-commerce.

The premium positioning of Stella Artois helped the brand achieve strong acceptance in the US and other markets where it is an import, including strong performances in Argentina and Brazil. The added refinement signaled by the Stella Artois chalice creates an experience that makes the brand credible as an alternative to wine when paired with food. To demonstrate how Stella Artois pairs with food the brand organizes sensory fine dining experiences in major cities. Recent Stella Artois Sensorium events took place in Australia. Stella Artois increased 10 percent in value, the most of the BrandZ™ Top 10 beer brands, followed by Heineken.

The Heineken brand benefited from its strong global sponsorships, including Formula 1 racing, European football Champions League, and Rugby World Cup, and is generally positioned as a premium brand in most markets. Similarly, Guinness increased slightly in value because of its consistent global positioning, although Guinness added several taste variants.

Latin American brands adopted to emerging trends. Skol, a Brazilian brand, introduced Skol Ultra, a low-calorie, low-alcohol beer intended to appeal to younger people, for example. But the brand value changes for Skol and Brahma, another Brazilian brand, and Colombia’s Aguila reflect the volatility of the local economies and exchange rate devaluation.

Modelo successfully aligned its liquid and emotional credentials. It appeals to people who prefer the taste of a Mexican beer. Modelo’s popularity in the US results from its ability to position the brand as a Mexican beer favored both by the Latino immigrant population and others who respect and strive to accomplish the American Dream, and who recognize in themselves the brand’s tagline, “Brewed with a fighting spirit.” 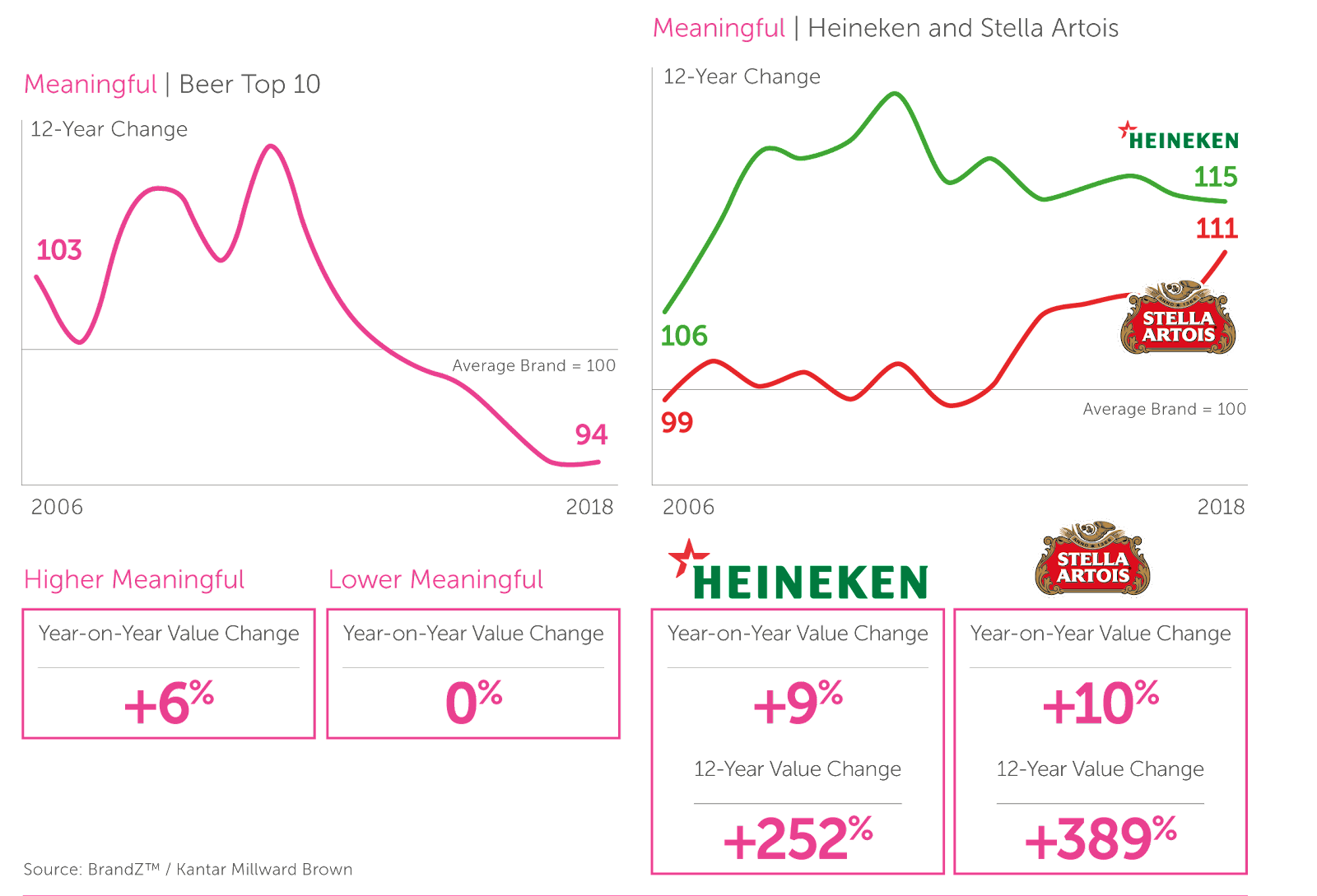