It is possible not only to measure the value of Indonesian brands, but also to assess the strength of Brand Indonesia itself.

The Best Countries ranking does exactly that, comparing perceptions of countries around the world held by a broad spectrum of consumers. There is a close relationship between how people feel about a country, and their attitudes towards the brands they associate with that country. Strong countries fuel strong brands, and vice versa

Developed by WPP’s Y&R BAV Group, the annual Best Countries ranking was launched in 2016 at the World Economic Forum’s meeting in Davos, the world’s largest gathering of global leaders and heads of industry and influence.

Despite its position as Southeast Asia’s most populous country and the region’s largest economy, Indonesia has a fairly low profile internationally. People may know Bali as a tourist destination, but many have little knowledge of the country beyond that, which means the term “Made in Indonesia” doesn’t immediately conjure up a strong mental image for international consumers, particularly those outside the region.

This is both a weakness and a strong opportunity.

How a country is viewed around the world – even by those who might struggle to identify it on a map – is of huge importance to brands. The words “Made in …” can instantly lend credibility and trust to a product or brand that a consumer hasn’t previously encountered. That can be enough to convince someone to buy, and, beyond that, convince them to pay a premium. Likewise, “Made in …” can prove an instant turn-off if a consumer associates the country of origin with poor safety standards, or sees it as being behind the times on social issues or workers’ rights.

For Indonesia, it is particularly pertinent now to understand how the country and its brands are perceived outside the country, given that the recently launched ASEAN single trading bloc of Southeast Asian nations makes exporting easier. As brands expand beyond Indonesia, they need to understand what consumers expect of them, and whether they meet, surpass or even contradict those expectations.

Brands also need to understand how a domestic, Indonesian audience perceives their Indonesian-ness, as the ASEAN agreement makes it likely that competition from brands around the region will increase in Indonesia. This provides an opportunity for local brands to maximize their “Made in Indonesia” credentials to help set them apart from newly arrived brands. There is great local pride and belief in Indonesian brands within the country, and this can be an advantage for brands in their home market.

The perceptions and performance of brands abroad feed back into the development of the country itself. Willingness to invest is closely linked to the strength of a country’s brand, and as local brands and businesses succeed, they generate economic growth as well as lending further positive associations to their country’s brand.

The annual Best Countries ranking measures global perceptions of countries against a series of qualitative characteristics – impressions that have the potential to drive trade, travel and investment, and directly affect brands. It was developed by WPP’s Y&R BAV Group, and The Wharton School of the University of Pennsylvania, in consultation with U.S. News & World Report.

The ranking combines the views of 21,000 people in 36 markets, who are asked detailed questions about how they perceive different countries against a range of key attributes. Interviewees comprise “informed elites” – college-educated people who keep up with current affairs, business decision makers, and members of the general public.

In the 2017 Best Countries ranking, Indonesia ranks 39th out of 80 major markets around the world across all measures. Its greatest attribute is being seen as “open for business”.

That puts Indonesia just ahead of Vietnam, and right behind South Africa in the global rankings.

The virtuous cycle every brand hopes for

The relationship between country brands and the products and services those countries produce is complex and changes over time. When a country and its brands represent consistent qualities and values, they lend one another credibility, and there is a multiplier effect for both.

Think of France and Chanel; both represent elegance, glamor and prestige. Chanel is intrinsically French, and France is synonymous with Chanel. The same could be said for Germany and BMW, and perhaps Italy and Ferrari, or Japan and Sony. In each case, the brand and the country are part of a virtuous cycle, a symbiotic relationship.

Brands can both shape and be shaped by perceptions of their country of origin.

Japan in the 1970s was known as a cheap manufacturing base, but is now respected as a world leader for quality electronics and technology thanks largely to brands like Sony and Toyota. South Korea has taken a similar path, with Samsung and Hyundai demonstrating to the world what modern South Korea is and, in doing so, creating a consumer predisposition in international markets to favor other Korean brands.

In a relatively short time, China, too, has shifted perceptions from being seen as the world’s toy factory, to a place of entrepreneurship and innovation, particularly in digital technology. This is partly because of government strategy and a rebalancing of the Chinese economy, but also due to the ambassadorial role of some of China’s leading export brands, such as Haier, Huawei and Alibaba. 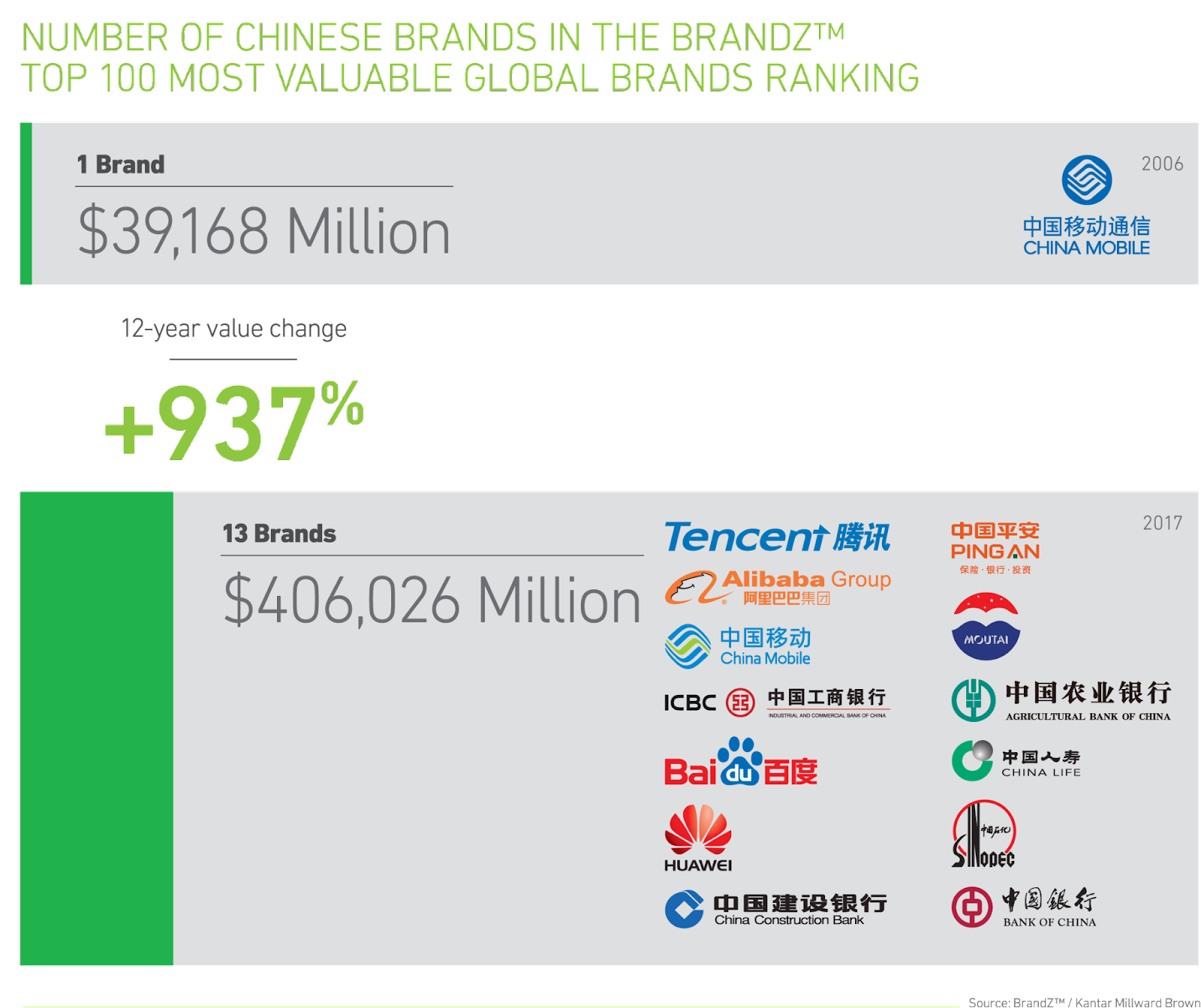 Entrepreneurial Chinese brands are rapidly emerging, and are blazing a trail that Indonesian brands should look to follow.

Although small, they are large enough to make an impression on consumers, even overseas. BrandZ™ examined overseas consumer attitudes toward both emerging and established Chinese brands. The research considered nine product categories in seven developed markets.

These findings are contained the BrandZ™ Top 30 Chinese Global Brand Builders, a report produced by BrandZ™ and Kantar Millward Brown in collaboration with Google.

How to measure a country

The Best Country ranking incorporates the views of more than 21,000 individuals surveyed in 36 countries in four regions: the Americas, Asia, Europe, and the Middle East and Africa. These people included a high proportion of “informed elites” – college-educated people who keep up with current affairs – along with business decision makers and members of the general public.

Collectively, the 80 countries in the 2017 ranking account for about 95 percent of global Gross Domestic Product and represent more than 80 percent of the world’s population.

People surveyed for Best Country were asked how closely they associated 65 attributes with a range of countries. These attributes were then grouped into eight categories that were used to calculate the Best Countries ranking:

Adventure: a country is seen as friendly, fun, has a pleasant climate, is scenic or sexy.

Entrepreneurship: it is connected to the rest of the world, has an educated population, is entrepreneurial, innovative, and provides easy access to capital. There is a skilled labor force, technological expertise, transparent business

Each of the eight measures is given a weighting in its contribution to the total score for each country, as follows. 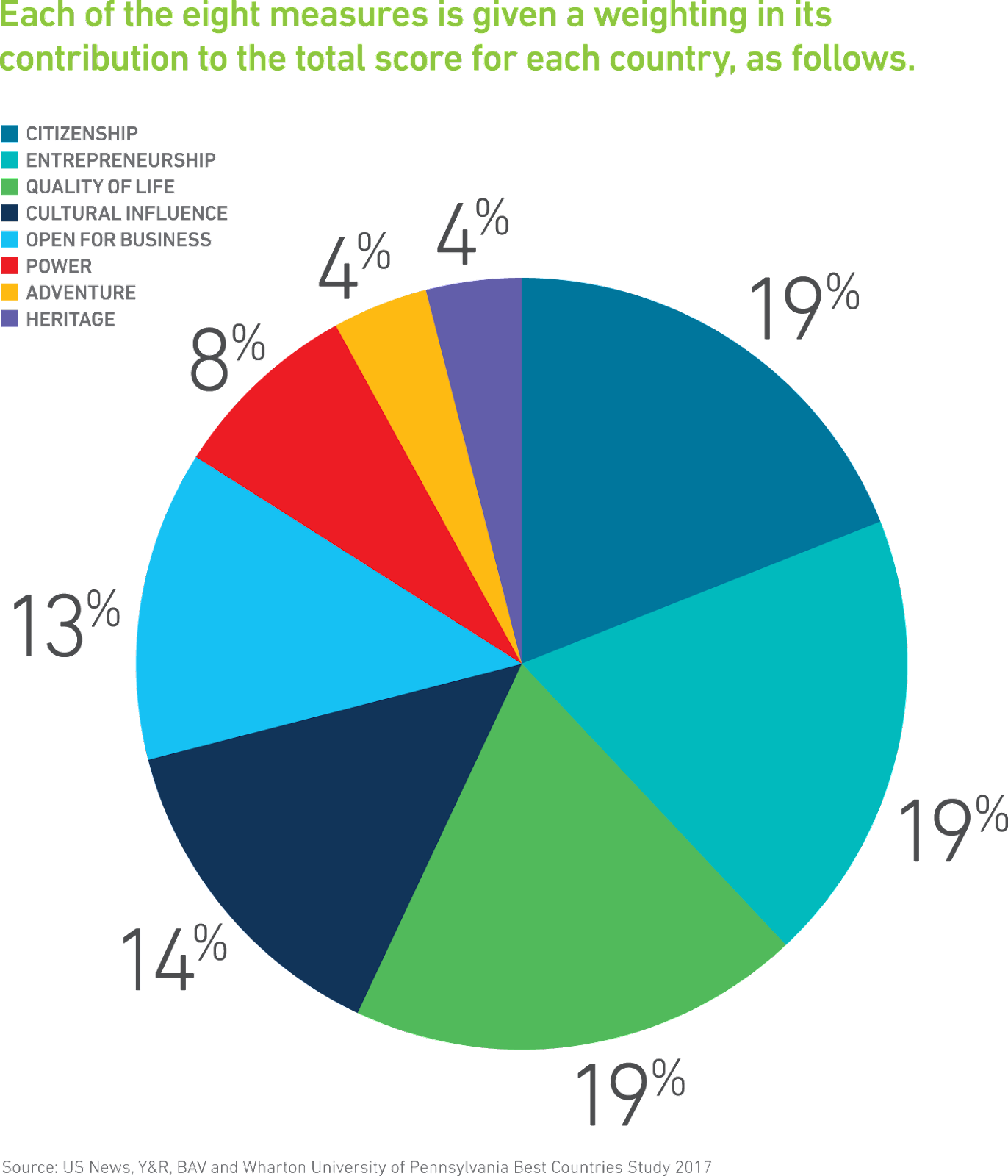 The weight of each category in the final index was determined by the strength of its correlation to per capita GDP (at purchasing power parity).  As seen in the above chart, a nation focused on providing great quality of life for its people, which cares about rights and equality, and has a focus on entrepreneurship, is seen as having the most powerful nation brand. This reflects how the world has changed; no longer is it just tanks and banks that give a country influence around the world. Hard power is making way for softer power that comes about as a result of entrepreneurship and cultural exports.

Best of the best 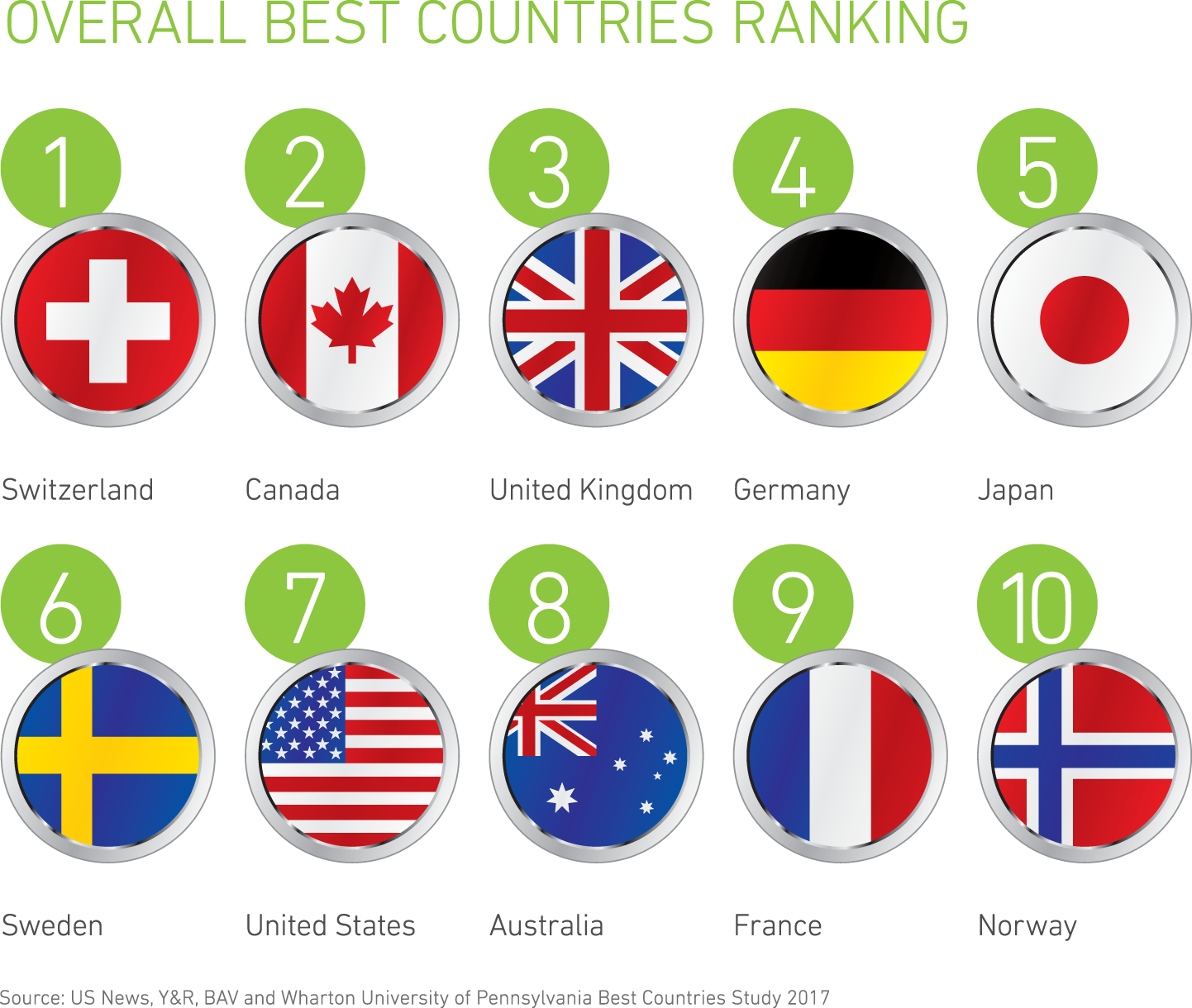 Switzerland tops the ranking as it is highly regarded for its citizenship, being open for business, for having an environment that encourages entrepreneurship, offering its citizens a high quality of life, and for being culturally influential. All of the other countries in the top five also score highly across all of these measures. Canada is especially strong on the citizenship measure, while the UK scores best for entrepreneurship and power. Germany has a similar Best Countries profile to the UK, though Germany is stronger on entrepreneurship and is seen as offering a better quality of life. Japan’s greatest strength is also entrepreneurship, but it also scores highly across all the other measures. 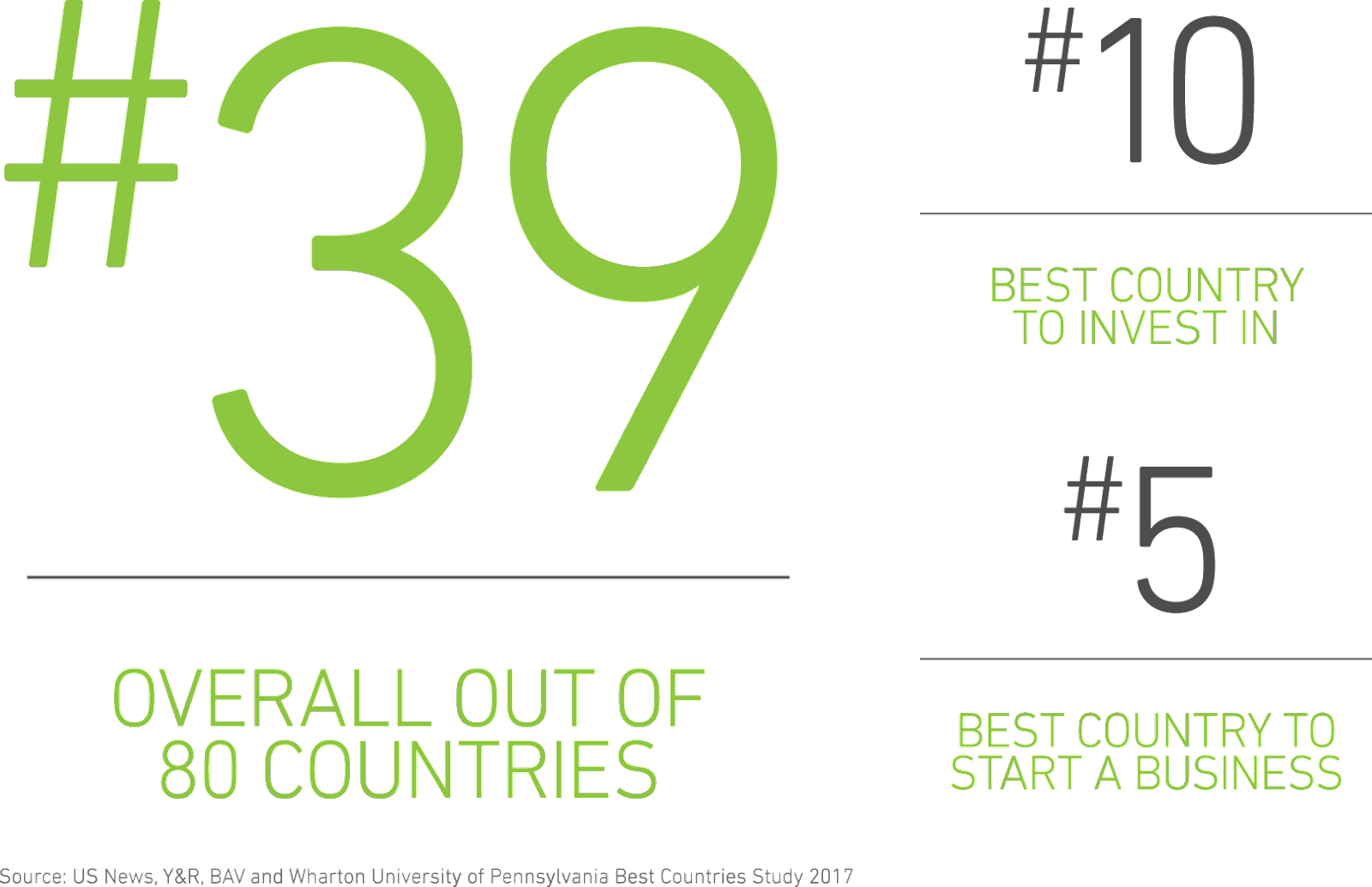 Indonesia is still a developing brand on the world stage, but shows promise not just as a tourist destination, but also as a hub for investment. This reflects well on Indonesia’s brands. 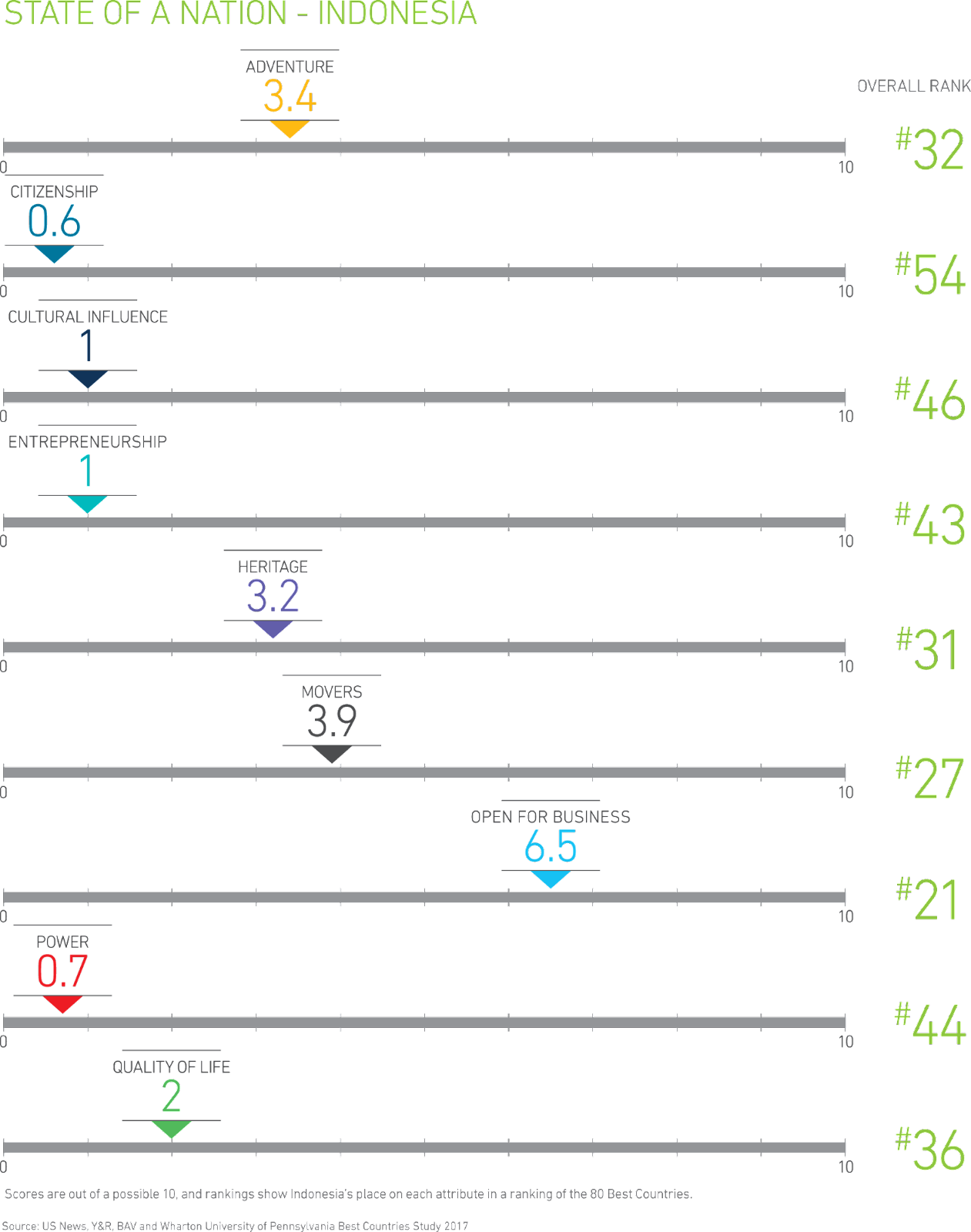 Best Countries for being ‘Open for Business’ 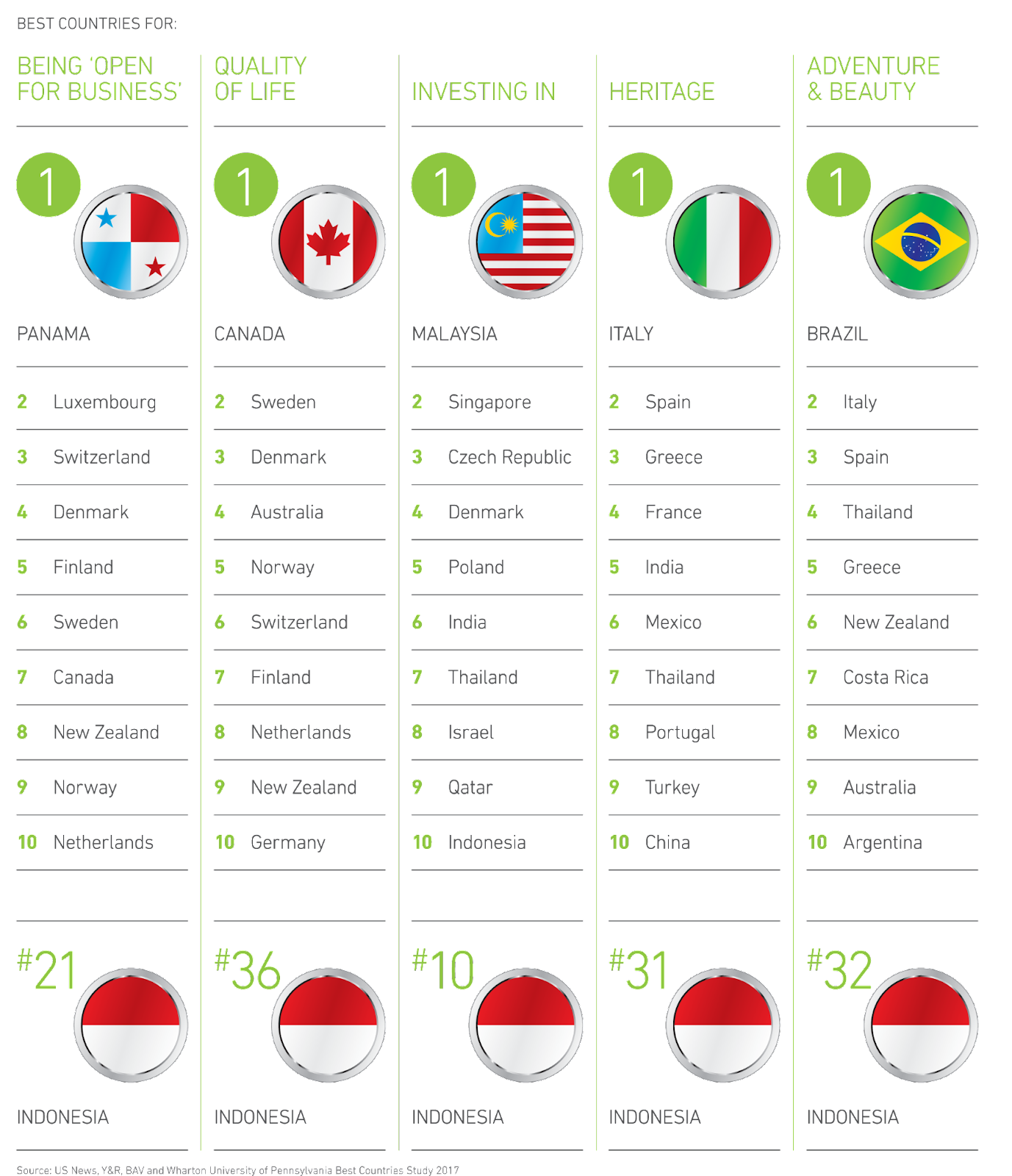