Burgers are back. The fast food category rose 13 percent compared with a 7 increase a year ago. Burger chains drove the increase, with McDonald’s and Burger King rising 29 percent and 28 percent, respectively. Underpinning these results, and the strong 18 percent rise of Domino’s Pizza, was a recognition of consumer priorities: better taste, healthier ingredients, and improved customer experience, enabled by technology.

The brands in all the fast food sectors—burgers, pizzas, and sandwiches—worked to balance tech with touch, enabling diners to order with a mobile app and receive their food quickly and with a smile. Scale made a difference. As the major chains adopted to rising consumer concern with health and wellness, smaller brands that initially recognized and catered to those consumer needs lost value or dropped from the ranking.

One of these chains, Chipotle, planned to continue its commitment to ethically sourced, organic food, but upgrade its restaurants. Consumers seemed to accept fast food as part of their food consumption repertoire, an acceptable indulgence, if not a steady diet. Consumers expressed this attitude often in social media, with Instagram pages filled with photos of food from some of the high-end burger brands, such as In-N-Out, Five Guys, and Shake Shack. 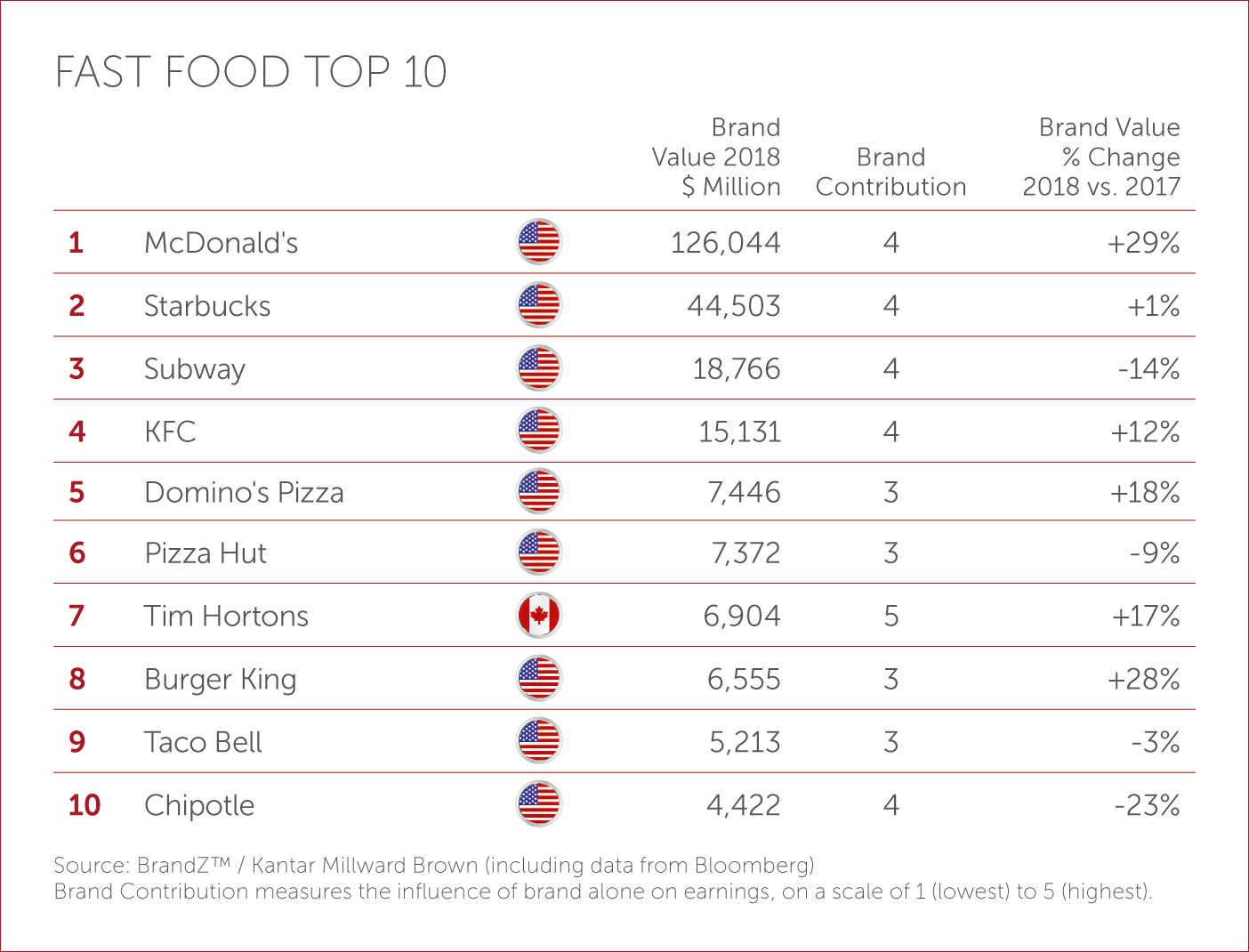 The burger chains benefited from having upgraded their restaurants, added breakfast and other occasions, and adjusted their menus to stretch for occasional customers willing to spend for a premium entry, while promoting staple items to satisfy the expectations of frequent, price-conscious customers.

The burger wars resumed, with claims about superior ingredients and cooking methods. In a Super Bowl ad that emphasized the freshness of its meat, Wendy’s criticized McDonald’s, calling its meat flash frozen. McDonald’s announced that it would make its Quarter Pounders with fresh beef by the middle of 2018. Burger King introduced its version of the Quarter Pounder, noting that it was flame broiled, not fried.

It was not all burgers. This acceptance of fast food in its fresher, somewhat healthier incarnation corresponded with the digital reincarnation of Colonel Sanders, the iconic KFC spokesperson. This time around, the KFC chicken hawked by Colonel Sanders soon will not be raised with antibiotics known to be harmful to humans. KFC improved its ingredients in China, where food safety is a major consumer concern. KFC is part of Yum Brands, which operates over 7,700 KFC and Pizza Hut locations in China alone.

Subway launched a new campaign with a 60-second Super Bowl ad called “Make it what you want.” The ad presented the brand’s core positioning—customizing fresh sandwich ingredients—in the context of a high-energy and youthful declaration of freedom with the line, “In life, and in food, don’t take what you’re given.”

Brands continued to improve their “phigital” brand experience, integrating physical and digital worlds, combining technology with the human touch. Tim Hortons improved its app to enable customers to order and pay on a mobile device and pick up the item at a mobile pickup location in their selected restaurant.

A digitization leader, Starbucks refined its mobile pickup app, working with IBM to find correlations between the weather and the items ordered. To encourage more digital engagement, Starbucks offered 50-percent off specials on certain beverages during late afternoon “happy hour,” but by invitation-only to the email addresses of customers with the Starbucks app.

KFC introduced an ordering app with a national ad campaign. And in another example of integrating all aspects of life, several fast food chains, including Starbucks and Dunkin’ Donuts, were included in a new dashboard touch-screen feature of some GM cars, which enables drivers to find restaurants. In an initiative called “All Access,” Taco Bell planned to expand its use of digital ordering and payment, starting with the installation of self-service kiosks.

McDonald’s added mobile ordering and payment in all of its over 14,000 US stores. Domino’s Pizza, a pioneer in digitizing food ordering, added a human touch to its tech advantage with ads that featured “carryout insurance,” a promise to replace any carryout pizza that encountered a mishap before it reached the customer’s home. Domino’s Pizza experienced another year of strong sales growth and expansion, adding over 1,000 outlets and ending 2017 with 14,856 restaurants worldwide.

Starbucks opened its largest and most interactive outlet, in Shanghai, with technology supplied by China’s e-commerce giant, Alibaba. An app recognizes the customer and provides a store layout and menu. The store, a Starbucks Roastery, is a combination of retail and coffee plant exhibition, including large copper roasting vats to deepen appreciation for coffee. An augmented reality (AR) function enhances the customers visit with additional information. Starbucks operates 3,000 stores in China, and over 28,000 worldwide.

At an experimental prototyped KFC store in China, consumers obtain food from a self-serve area that includes healthy offerings like salads. Consumers can pay by looking into a camera that has Alibaba’s facial recognition software. The chain calls this option “smile to pay.”

As part of its effort to improve its locations and drive sales, Subway designed a new prototype that includes self-order kiosks that take Apple Pay and Samsung Pay. The restaurants include better seating, with Wi-Fi and USB charging ports. The store is being tested in North America and the UK. The chain expects to eventually refit its almost 45,000 locations.

The growth of delivery services, such as GrubHub, Amazon Restaurants, and UberEats challenged the delivery capabilities of fast food brands. Yum Brands, which operates KFC, Taco Bell, and Pizza Hut—with a total of over 45,000 locations worldwide—purchased a stake in GrubHub.