The BrandZ™ Top 50 Most Valuable Indian Brands 2017 increased 21 percent to $109.3 billion, in a year marked by serious disruptions, particularly from government initiatives to reform the economy. Following a 2 percent decline a year ago, the ranking resumed its positive momentum, with value up 57 percent since 2014, when the Top 50 brand value totaled $69.6 billion.

The India Top 50 outpaced both the BrandZ™ Global Top 50 and China Top 50, which grew 32 percent and 46 percent in value over the same period. The composition of the Top 50 shifted over three years with 38 local Indian brands in the Top 50 compared with 35 in 2014, while Indian brands owned by multinationals declined from 15 to 12.

The strong brand value increase reflected consumer optimism, with some regional variations, and a strong performance by financial brands, which comprise 39 percent of Top 50 value. Banks rebounded from bad-debt problems. ICICI Prudential, an insurance brand, led in value appreciation, increasing 89 percent. HDFC Bank retained the No. 1 rank in the BrandZ™ India Top 50, rising 24 percent in value, following a 15 percent increase a year ago.

The BrandZ™ Top 50 value increase also echoed the robust appreciation of the Indian stock exchange, which soared to record levels. The BrandZ™ Top 50 Portfolio of stocks continued to outperform SENSEX India, a weighted index of 30 stocks on the Bombay Stock Exchange. The BrandZ™ India Top 50 Portfolio rose 38.8 percent over the past three years, more than twice the rate of SENSEX, which increased just 15.0 percent, demonstrating how valuable brands deliver superior stock holder returns. In addition:

-               All but five Top 50 brands increased in value, and growth crossed categories, led by a 30 percent increase in telecom providers/entertainment, followed by financial, up 26 percent, and automobiles, with a 23 percent increase.

-               Six of the seven Newcomers are local Indian brands. And two Newcomers—Sun Direct and Dish TV—inaugurate the entertainment category in the India Top 50, reflecting changing consumer viewing habits and greater variety of content.

-               Brands invested more in digital media, which led all media segments in percentage rise in spending. TV remained strong, however, and India was the only major market where investment in traditional media continued to grow

The India Top 50 exhibited strong brand health, as measured by a new BrandZ™ metric called Vitality Quotient (VQ), which assesses brand health based on five indicators—Brand Purpose, Innovation, Communications, Brand Experience, and Love. The India Top 50 scored 110, identical to the Global Top 50, on an index where 100 is average.

Brand value increased despite successive market disruptions, some strategically implemented by the government of Prime Minister Narendra Modi to improve conditions for doing business in India, and realize the government’s vision for a New India with greater stature abroad and economic equality at home.

With demonetization, implemented in November 2016, the government banned certain cash currency to reduce the underground economy, increase tax revenues, and accelerate the shift to digitization and mobile wallets. On July 1, India implemented a national goods and services tax (GST), a type of VAT intended to simplify a complicated combination of state and local taxes and add transparency.

The shock of demonetization impacted brands in different ways, depending on how dependent the category was on cash transactions. Fast moving consumer goods (FMCG) brands focused on short-term tactics to build revenue. In contrast, mobile wallets and some other financial services brands benefited immediately from demonetization.

In FMCG, Patanjali continued to broaden from its original focus on Ayurvedic wellness products into an extensive FMCG range that challenged the multinationals. Patanjali turned up the communications volume and more aggressively called out the multinationals for not being as authentic.

Other disruptions resulted from India’s global integration. In today’s wired world, news of overseas shocks—Brexit and the US election—reached India instantaneously and had an impact on consumer confidence, especially in IT centers like Bengaluru, where people worried whether the America First declarations of the Trump administration would limit business growth in India and opportunities to study or work in the US.

In addition, the populism of Brexit and the Trump election reverberated in India. As happened in other parts of the world, populism sometimes produced ugly bigotry, but other populist expressions were about Indian national pride. And the sharpest distinction between populism abroad and in India was that Indians did not reject globalization. The embraced it. Globalization has been good for India.

Conversely, these developments influenced how the rest of the world views India. Business decision makers ranked India low on some dimensions that are important for doing business, like transparency, according to the latest Best Countries research of Y&R’s BAV Group. But business decision makers also expressed high regard for India as culturally significant, innovative, and on the move. They ranked India No. 3 in the Movers category of up-and-coming economies, just above China and Japan. 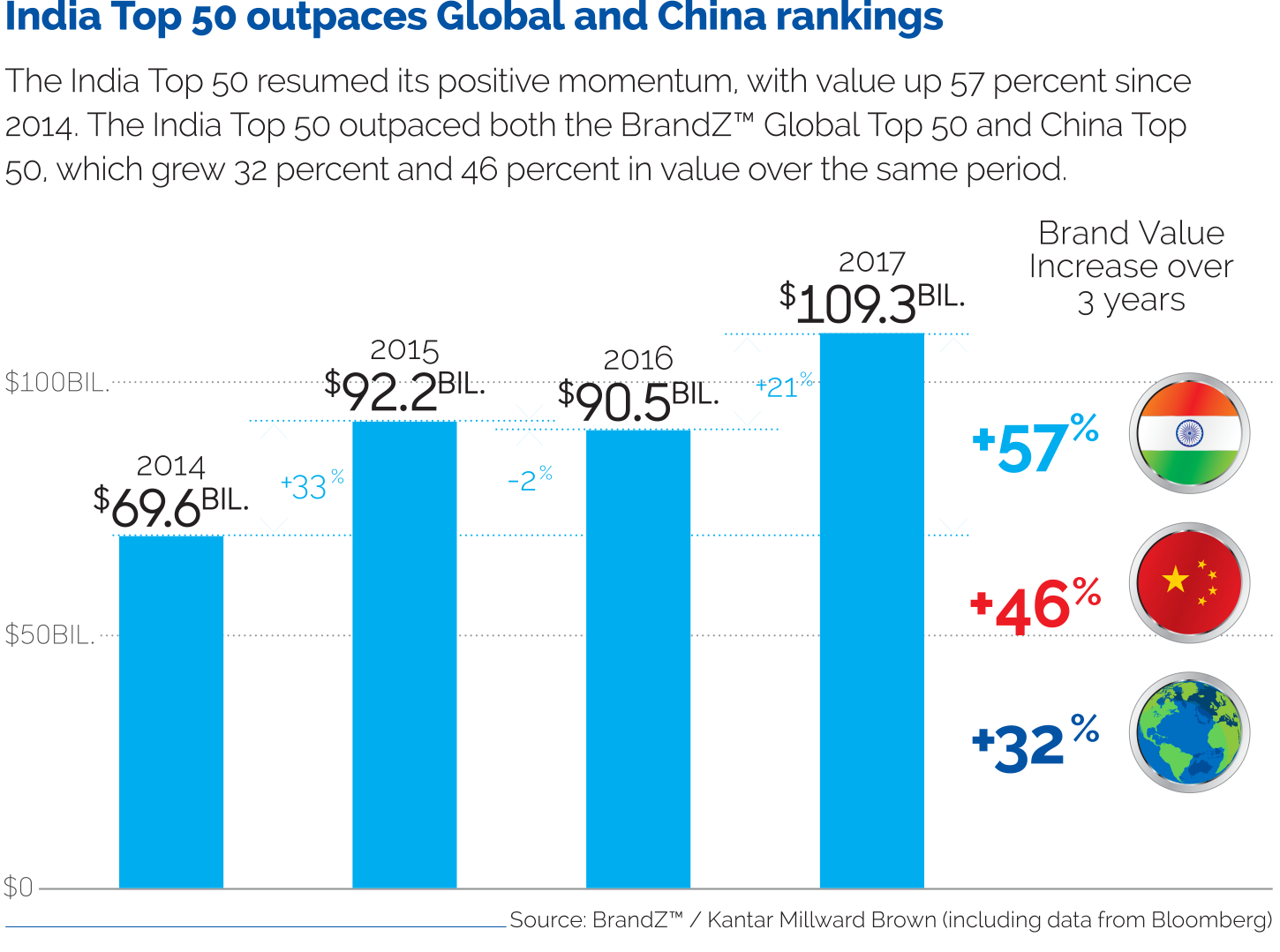