The proliferation of new media channels thanks to the internet, and growing levels of connectivity across the country, mean that digital advertising is once again the fastest-growing medium in terms of adspend. However, the pace of growth has slowed to single digits now – a long way from the heady days of 2006, when digital adspend grew at over 91 percent, though obviously from a much smaller base. Digital now accounts for €30 of every €100 spent on advertising in Spain, up from 8.6 percent a decade ago.

While digital is where the biggest growth is, this remains an incredibly strong television market. Pay TV subscriptions are rising every year, and free-to-air TV retains a loyal following. TV in 2018 was expected to account for 39.9 percent of Spanish advertising investment, growing at 3 percent a year.

Print readership and, as a result, print advertising, continue to decline. Magazines and newspapers now take 14.8 percent of total investment, down from 31.4 percent 10 years ago.

Radio and out of home media are rising, thanks to the improving economy and rising consumption. Advertisers spent 2 percent more on each of these media in 2018 compared to 2017. 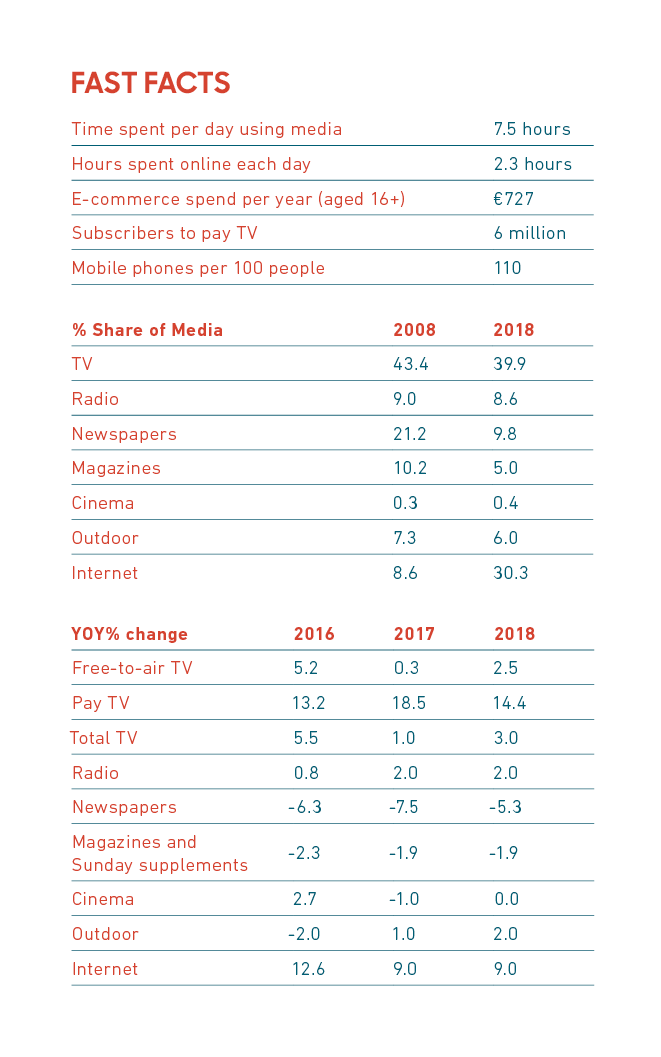 The art of integration is integral to how enjoyable and memorable a campaign is perceived to be. Use these rules as a guide:

1 Integrate campaign cues – Consistent use of characters or personalities differentiates the best campaigns from the rest. Basics like logo and slogan also help.

2 Start with a strong campaign idea – Campaigns with a strong central idea are far more likely to remain integrated, even when individual elements are customized for specific placements. The central idea is a strong starting point for brands working on outdoor and online executions, rather than starting with a video ad and working backwards.

4 Invest only in channels with a clear role to play – Through our analysis of Effie-winning campaigns for advertising effectiveness, we see success comes from having a specific reason to use each channel. Understand that attitudes to ads vary by channel and format, and different media have different inherent strengths. Don’t underestimate consumer openness to traditional media.

5 Customize content for each channel – Think about customization for each placement to boost effectiveness, but remember that more customization isn’t always better. For example, using more lively content that is disconnected from the campaign carries the risk of reducing overall effectiveness. So, if you’re not genuinely edgy, don’t try to fake it just for your online videos.