Media - Time to tune in

Time to tune in

This is a year in which Indonesians are spending even more time than usual with their eyes on their screens, thanks to a series of mega events. The general election, the Asian Games and the football World Cup have all gripped the nation, and that means more eyeballs for media channels. These eyeballs attract greater investment from advertisers, and this is expected to lead to a surge in spending– slightly down on predictions made a year ago, but still the highest ever and significantly more than in 2017.

Digital channels account for a growing share of advertiser budgets, though TV is still the big draw in this market, accounting for about two-thirds of all media investment.

This is 10 percent more than was spent in 2017, and this represents the fastest rate of annual growth in Indonesia for four years. It is mainly driven by a 25 percent boom in the amount expected to be spent by brands online this year, though most media channels are continuing to attract rising rates of investment. TV, for instance, is forecast to grow 10 percent this year. Magazines are the only medium expected to see less spend this year than last year.

Internet penetration is growing fast – but there is still massive scope for expansion, for several reasons.

Fewer than half of Indonesian adults so far have an internet connection. GroupM data shows online penetration has shot up from 33 percent in 2014 to an estimated 43 percent last year; by the end of 2018, 47 percent of Indonesians are forecast to be connected. This means millions of people are still yet to experience the internet. Other estimates say the 47 percent mark has already been reached.

The 47 percent of people who are already online account for the vast majority of consumer spending in Indonesia. Brands that are yet to ramp up their digital spend are therefore missing a golden opportunity, as these relatively affluent shoppers do and buy more digitally each year.

Shoppers are now spending a combined US$10.9 billion a year online – a huge leap from just five years ago, when that total was just $1.1 billion. These figures somewhat understate the amount being spent online, as they don’t include money spent on travel services. The average online spend for each internet user has shot up from just $15 a year in 2013 to $89 a year forecast for this year.

Food and beverage brands together account for the highest advertising investment by any category in Indonesia, followed by personal care brands, corporate and public services, and communications equipment and services. In an election year, however, political parties invest heavily. 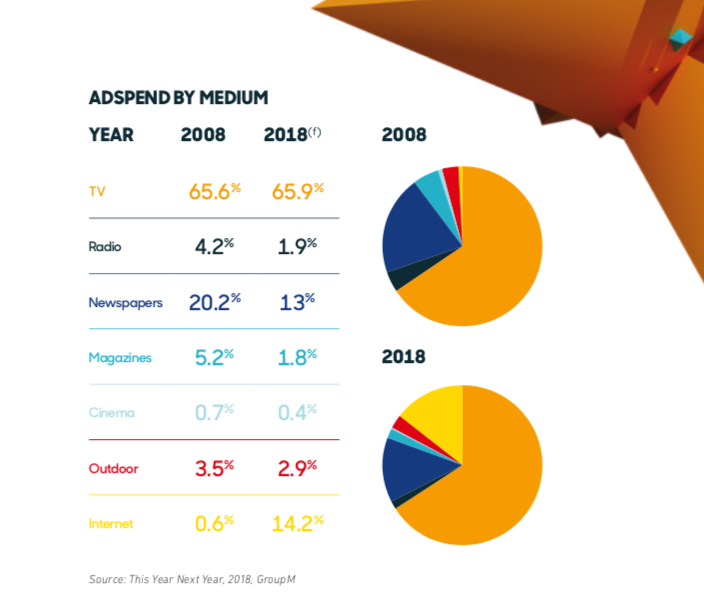 Great storytelling is at the heart of great advertising all over the world, yet the ads that work well in other markets often fall flat when transferred to Indonesia. Brands can ensure they make a strong local connection by telling stories that resonate with cultural values. One of these values is national pride, which can be expressed in ways that celebrate local culture and traditions – without resorting to flag waving.

Aqua water champions traditional courtesy and mutual respect through a campaign created with graphic designer Eric Widjaja. His design depicting people offering each other warm, respectful greetings features on special-edition Aqua bottles, and an online video explains the concept behind it. Meanwhile Bukalapak celebrates the success of small business owners who trade online and deliver what consumers around the country want, in a fun demonstration of how new technology can reinforce an age-old value – collaborating for mutual success.