Regions Overview: Led by Asia, the Top 10 of all regions rise in value

of all regions rise in value

Every region rose in value in the regional rankings, which include the Top 10 most valuable brands in Asia, North America, Continental Europe, the UK, and the Top 6 from Latin America. Asia and North America led regional growth, driven by the value increase of Chinese and US brands. The positive performance in all regions benefited from a strong global economy. But the long-term growth depended on brand-related factors.

The regional rankings reflect the overall regional value changes within the BrandZ™ Top 100 Most Valuable Global Brands, where Chinese and US brands increased 47 percent and 23 percent, respectively. Asia and North America together comprise 88 percent of the total value of the BrandZ™ Global Top 100—up from 74 percent 12 years ago.

In counterpoint to the value concentration in Asia and North America, brand value in other regions of the world grew more slowly and the proportion of value those regions contribute to the BrandZ™ Global Top 100 declined. Asia (excluding China), Continental Europe, and the UK increased in value only 21 percent, 37 percent, and 26 percent, respectively over the past 12 years.

The Top 100 also became more regionally diverse. Twelve years ago, no Latin American brands were represented in the Global ranking. Today, brands from the rest of the world—primarily Latin America—comprise a small but growing 1 percent of the ranking. In addition, new countries are appearing in the ranking. This year, an Indonesian brand entered the Top 100 for the first time.

And brands from other regions comprise one percent of the Top 100 ranking. 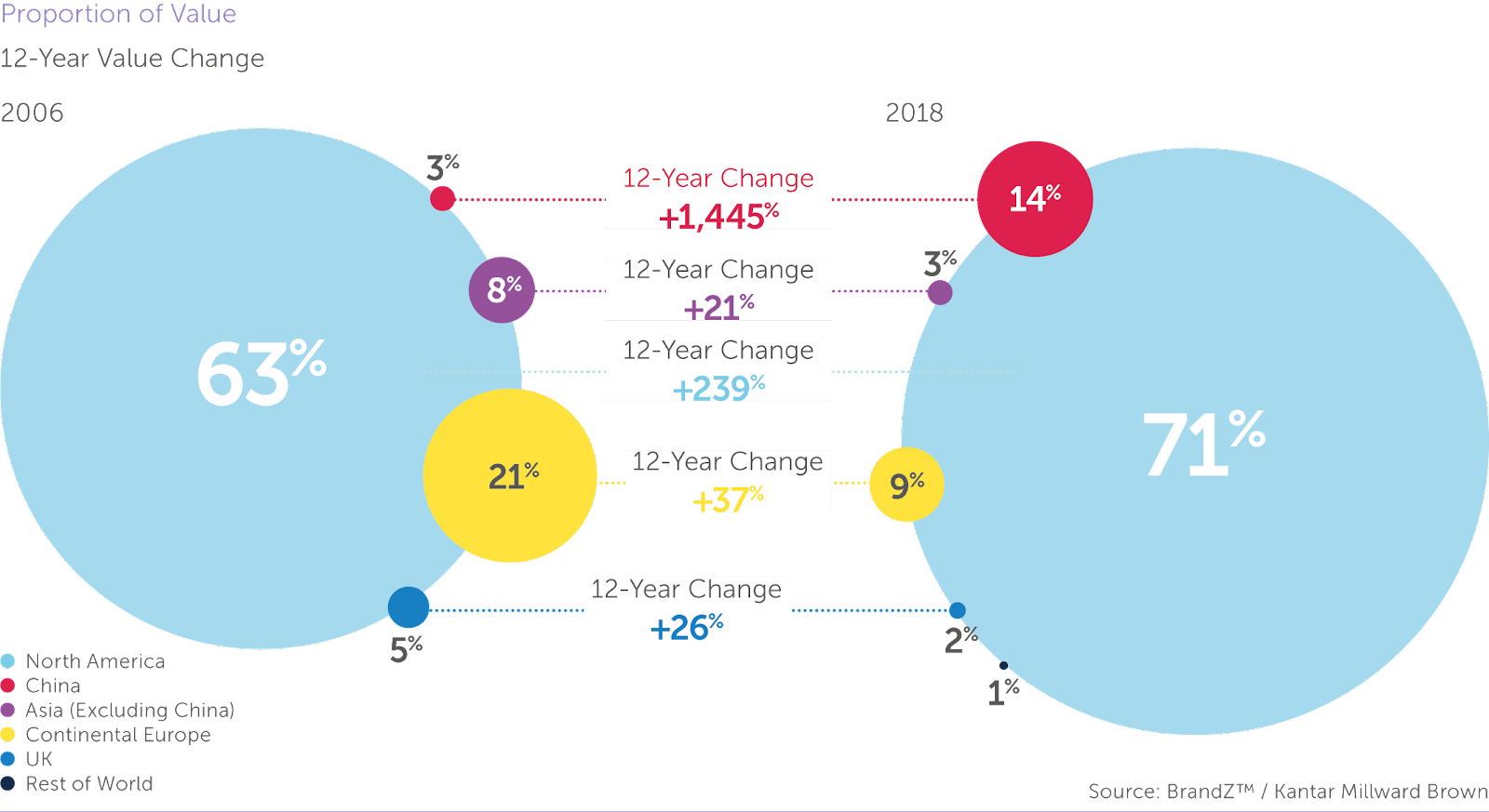 Regardless of region, brands ranked in the BrandZ™ Global Top 100 Most Valuable Global Brands score high in Brand Power, a BrandZ™ measurement of brand equity, the consumer’s predisposition to choose a particular brand. High Brand Power correlates with strong volume share. Brand Power is measured with an index where 100 is average. Chinese brands score the highest, 218. US brands score 176.

Brands from the US and China also score higher than brands from other countries in Innovation, a BrandZ™ metric. A score of 100 is average. The US brands score 120 and Chinese brands score 114. An analysis of the BrandZ™ Global Top 100, following the same 94 brands in 2006 and 2018, found that over 12 years, brands that score high in Innovation increased 273 percent in value, while low Innovation brands increase only 36 percent.

… But brands in all regions score high in Brand Power

An analysis of the BrandZ™ Top 100, following the same 94 brands in 2006 and 2018, found that over 12 years brands that score high in Innovation, a BrandZ™ metric, increased 273 percent in value, while low Innovation brands increase only 36 percent. 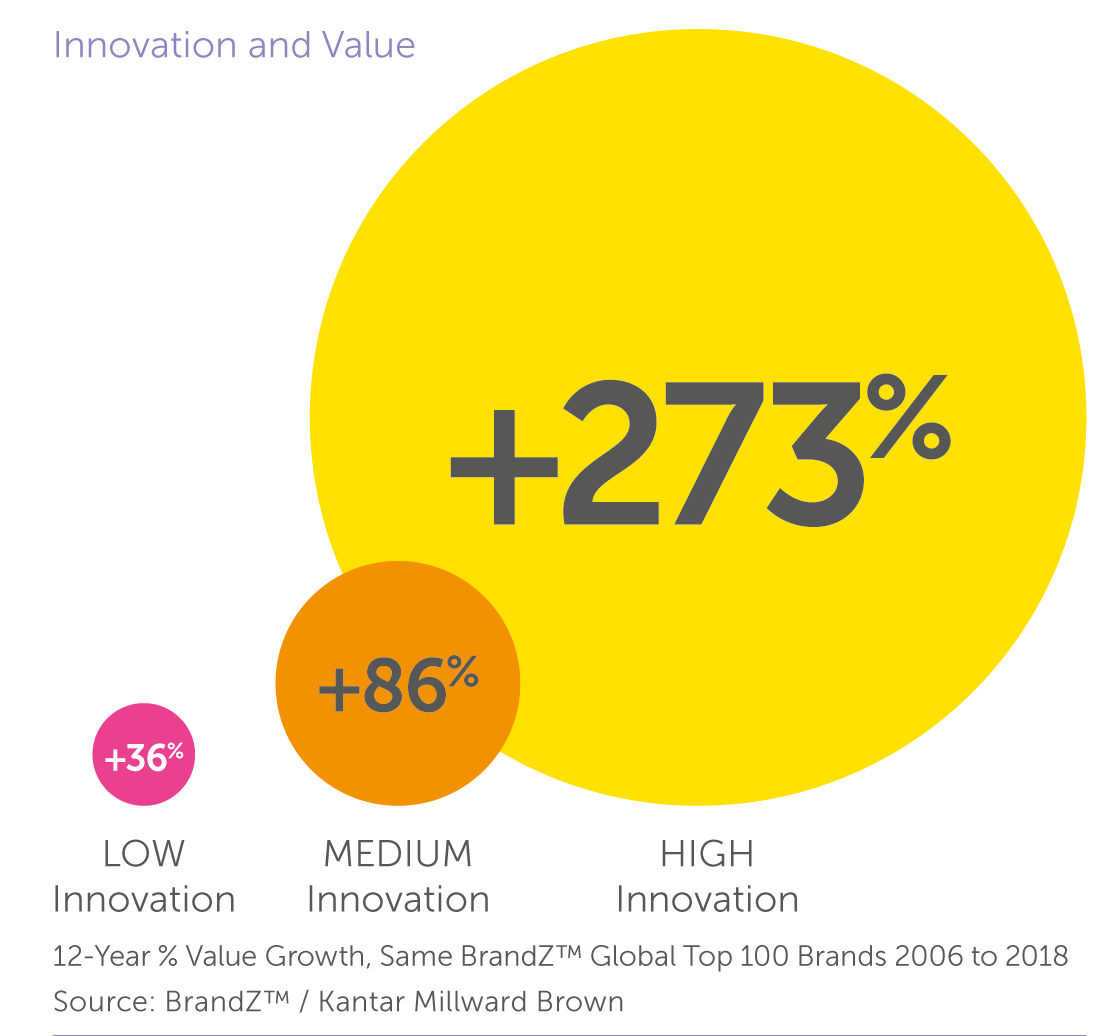 Leading brands typically outperform the average country or regional Innovation score. For example, with a score of 133, Microsoft surpassed the US Innovation average of 120, and JD.com scored 127 in Innovation, compared with an average Innovation score of 114 for all BrandZ™ Global Top 100 brands from China. 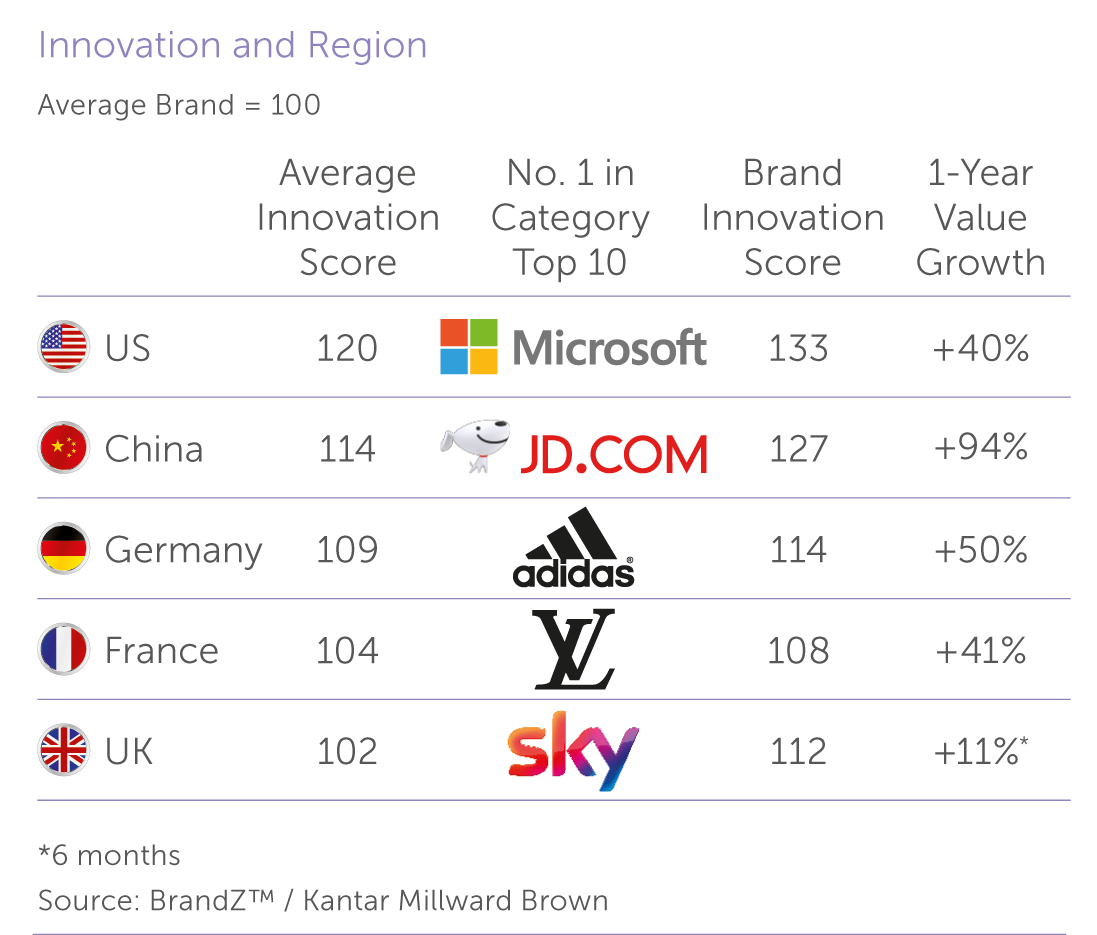