Led by Alibaba and JD.com, the retail brands ranked in the BrandZ™ China Top 100 collectively rose 55 percent in brand value on top of a 47 percent increase a year ago. One brand, VIP.com, decline in value. And the online used car retailer, Uxin, joined the ranking for the first time, bringing the total of retail brands to six. Retail category growth resulted in part from symbiotic partnerships among online and offline brands. 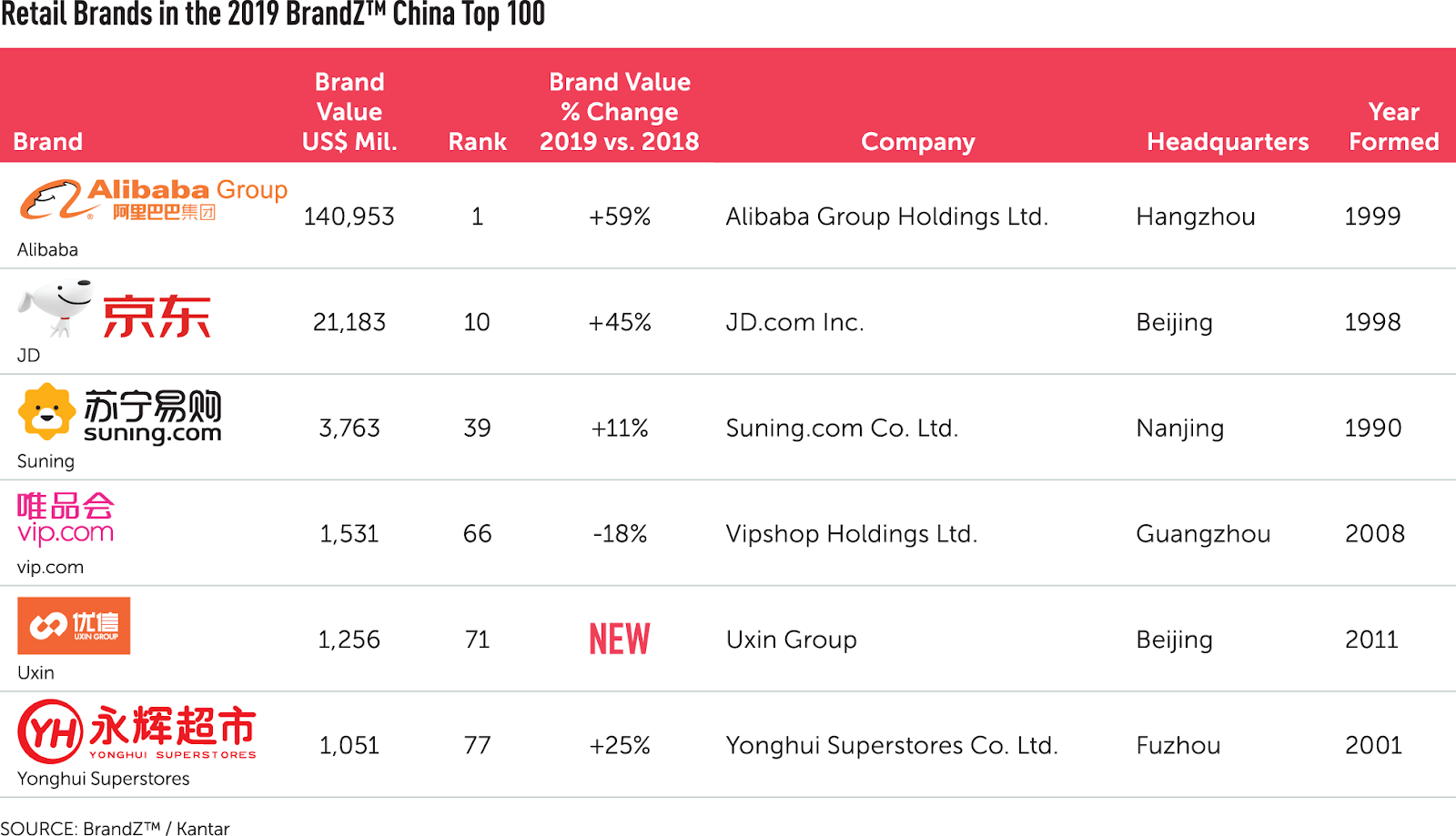 Smaller stores reallocated their space, too. Reducing retail displays and adding products and staff to pick orders, they evolved into hybrid locations with both retail and warehouse space. Brands that specialize in delivery, such as Meituan and Ele.com, enabled the smaller stores to participate in this transformation to convenience-centered New Retail.

Meanwhile, developments in New Retail, a term invented by Alibaba, impacted Alibaba. No other brand has surpassed Alibaba’s ability to employ technology in ways that embrace consumers into a branded ecosystem in which they can purchase online or offline, pay with the Alipay QR code on their mobile phone, and have their orders rapidly delivered. But for Alibaba, the cost of sustaining this ecosystem and recruiting new users is increasing. And new competition is emerging.

Pinduoduo, an online site known to Chinese consumers for group purchasing at discount prices, is expected to gain around 7 percent of the e-commerce market this year, according to Kantar Consulting. The brand successfully listed on NASDAQ during the summer of 2018. At the other end of the value spectrum, NetEase Kaola, is a leading cross-border planform that enables Chinese consumers seeking high-quality premium products to access international brands.

To help accelerate its growth, Alibaba has initiated programs to help brands on its site become better online marketers. One of Alibaba’s core strengths is its ability to gather and integrate consumer data. These new programs share some of these data with certain brands, enabling them to better understand their customers and create better messaging and more engaging experiences, and also identify potential new customers.

Suning, which partnered with Alibaba, continued to move aggressively into online while closing underperforming physical stores and strengthening selected stores with new technology. Because of its physical store legacy, Suning is especially present in Tier 3 and 4 cities. This physical presence in lower tier cities benefits Alibaba, which has partnered with Suning as well as another retailer that is well represented in lower tier cities, RT-Mart.

Alibaba connected with RT-Mart when it purchased a minority interest in Sun Art Retail Group, which operates hypermarkets under the RT-Mart and Auchan banners. Alibaba has been upgrading the RT-Mart stores with some of the knowledge gained from its acquisition of Hema, a supermarket known for its fresh food and technology that makes the store both a place to shop and a distribution center for order delivery.

Yonghui Superstores continued to thrive because of its emphasis on freshness, which is one of the few incentives for customers to shop in physical stores. Yonghui has been focusing on quality and pioneering new in-store technologies. It is especially strong in lower tier cities, which is where the Chinese market is experiencing its highest rate of growth.

The presence in lower tier markets also helps VIP.com. As part of its shift away from its discount orientation, Vip.com is working in partnership with JD.com. Vip.com is especially strong among women and expands JD.com’s access to those shoppers. Conversely, by working with JD.com, VIP.com hopes to expand its reach to men shoppers through JD.com.

On Double Eleven day, the shopping festival and indicator of retail industry health, consumers spent $30.8 billion, just on Alibaba sites alone, up 27 percent from a year earlier. Mean spending per person was just under $400, somewhat less than planned, according to Kantar Consulting, which found that Chinese consumers have become much more sophisticated. They shopped on two-to-three platforms and almost two-thirds reported that they had spent “just the right amount.”