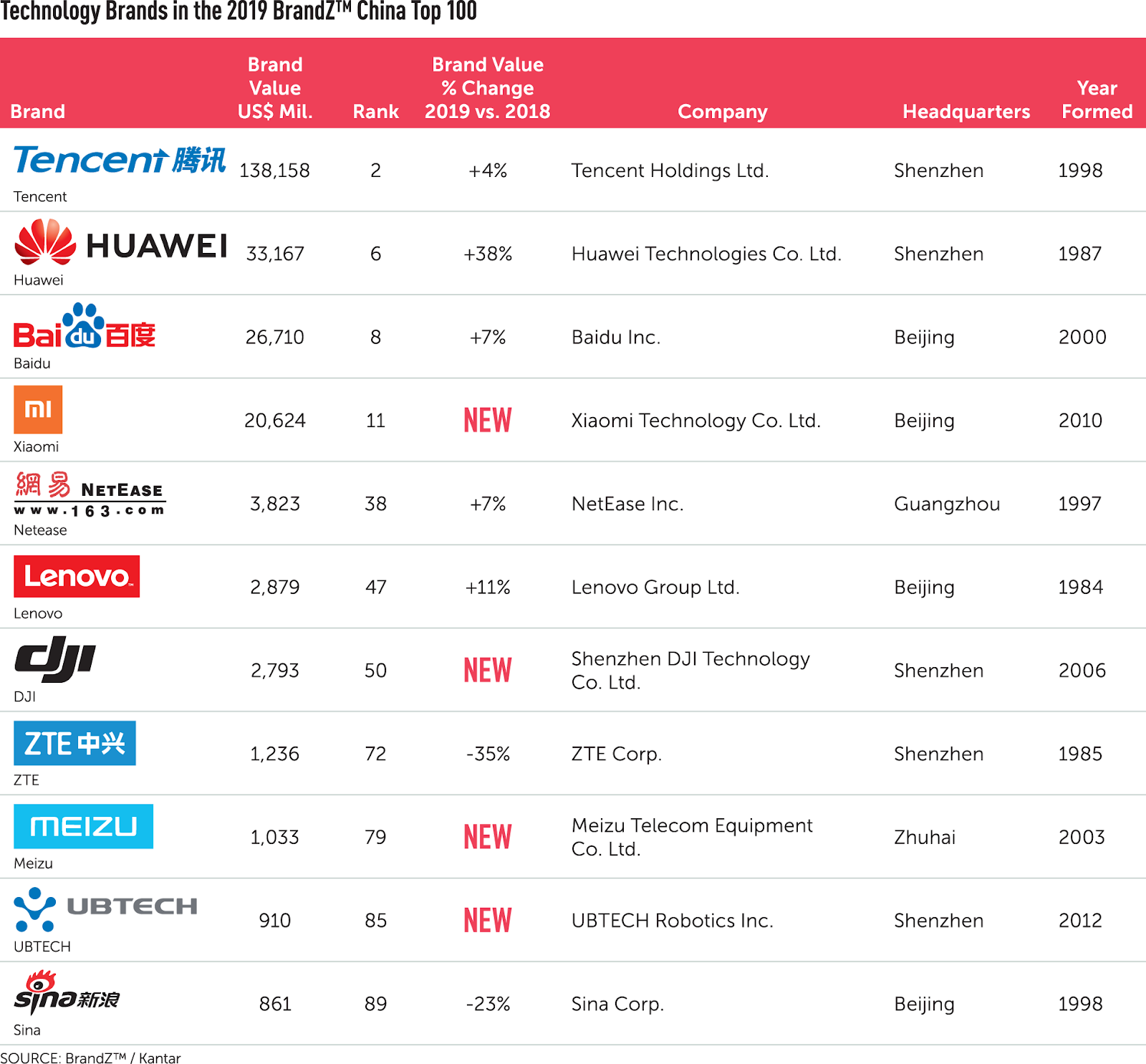 All but two of the 11 brands increased in value. In addition, four of this year’s newcomers, about a quarter of brands entering the ranking for the first time, come from the technology category. These developments reflect both entrepreneurial advancements in China and the Chinese government’s determination to make China a leader in technology as part of its Made in China 2025 policy.

Among the technology brands, the internet platform Tencent exerts the greatest influence. Along with Alibaba (ranked in the retail category), Tencent is one of China’s two largest online-offline ecosystems. providing products and services that enable Chinese consumers to conduct most aspects of their daily lives from their mobile phones.

Tencent’s ubiquitous WeChat app, with around one billion monthly active users, drove much of Tencent’s revenue. To position for future O2O development, and compete effectively with rival Alibaba, Tencent invested in Meituan Dianping, a leader in O2O services.

After several consecutive years in which brand value increased over 20 percent, Tencent edged up 4 percent in value, in part because regulatory concerns about online content hurt Tencent’s gaming business, a major revenue contributor. Late in the year, revenue from advertising and cloud computing began to offset the gaming revenue shortfall. Around the same time, Tencent listed its music business on the New York Stock Exchange.

Gaming content restrictions also hurt the results for Baidu, China’s search engine giant. Advertisers cut back spending because of uncertainty about the China-US relationship. Advertising generates most of the Baidu’s revenue. To increase revenue from offline advertising, Baidu invested in an elevator advertising company. It also continued to aggressively develop its automated intelligence capabilities, which include advertising and other ventures, such as autonomous cars. It entered into a partnership with Shanghai to build an innovation center in the city.

Online video and gaming provider Netease provided one of China’s popular mobile game, “The Day After Tomorrow,” but, facing fierce competition, it curtailed its live streaming platform. Sina, the online portal, derived strong profits from the advertising on its Weibo site, a Twitter equivalent.

Having grown to become one of the world’s largest smartphone makers, enjoying market dominance in China and India, Xiaomi announced a strategic commitment to artificial intelligence and the Internet of Things, which will include partnerships with Ikea, the furniture brand, and Ji Hotels. Racing to introduce 5G-enabled smartphones, Xiaomi also expanded into smart speakers, where its competitors include Baidu and Alibaba. Huawei, which produces a voice assistant for China, is planning to develop a voice assistant for its overseas markets.

With operations in around 170 countries, Huawei is the world’s largest supplier of telecommunications equipment and the second-largest smartphone maker, after Samsung. Because of security concerns, the US government blocks Huawei’s participation in the American market. These restrictions prevent Huawei from pursuing a major opportunity, the development of 5G infrastructure in the US. The arrest of a top Huawei executive in Canada put the brand at the center of China-US tensions.

Another leading Chinese telecommunications equipment supplier and smartphone maker, ZTE, was also impacted by the security concerns of Western governments. Trade tensions hurt other Chinese technology brands, including, Lenovo, which continued its efforts to expand the smartphone business that it purchased from Motorola in 2014. The market leader in PC sales, Lenovo benefited from industrywide growth. Its Yoga line of premium PCs was well received.

China’s success in achieving international stature with its technology products was also demonstrated by DJI, a BrandZ™ China Top 100 newcomer, and the world’s largest maker of drones for both consumer and commercial purposes, including agriculture, energy, and construction. Like other Chinese technology companies, DJI was affected by Western security concerns and Chinese stock market fluctuations.

Two other newcomer brands also illustrate the breadth of China’s technology industry. Meizu makes and markets smartphones specifically priced and designed to appeal to young people. UBTECH is a leader in artificial intelligence and humanoid robots used for business, education, and entertainment. Tencent led a recent round of investment funding.