Sitting atop the BrandZ Top 100 Most Valuable United States Brands are 5 technology giants whose influence is so ubiquitous globally that we’ve named them the Fearsome Five: Google, Apple, Amazon, Microsoft, and Facebook. Together they have a combined Brand Value of $1 trillion and account for a third of the value of the entire United States Top 100 Brands 2018.

These brands are remarkable for their pervasiveness in many people’s daily lives. Americans, for example, often check Facebook the moment they wake up. Many have smart devices like Google Home and Amazon Echo to play music, buy products, and tell them the day’s weather. They read CNN and The New York Times on their iPhones. Once at work, Microsoft Windows and its Office productivity software often occupy much of their days. And these brands continue to accompany their consumers until they make a final check on email or Facebook before going to sleep.

While much is written about these brands, BrandZ research reveals unique insights into their particular strengths and what makes them so valuable.

Meaningfully different and then some

We can start with meaningful difference, a critical measure that reflects a brand’s ability to meet consumer needs and build an emotional connection by standing out as unique from others. You might think that such brands would not necessarily score well on this. After all, the Fearsome Five continually compete with one another, often with at least two of them vying for control of a technology category—with varying degrees of success and tenacity. Microsoft’s bid to unseat Google in search has been a long, ongoing slog. Google, Amazon, and Apple with its new HomePod are all vying for market share in the fast-growing home assistant sector. Facebook, Microsoft, and Google all have entries into the mixed and virtual reality space.

In spite of all this, BrandZ research confirms we already know: these brands are all extremely meaningfully different. The average brand scores 100 for this measure. Any score over 110 is considered high. In the United States Top 100 Most Valuable Brands 2018, the average score is a very good 119. However, the least meaningfully different brand of the Fearsome Five is Microsoft, with a score of 148. Apple tops the chart with 187.

In other words, although each has points of overlap, they also show clear areas of differentiation. Amazon has set itself apart in numerous ways. No other product mirrors its Amazon Prime service, which combines free, two-day shipping with entertainment and other benefits.

BrandZ measures disruption by the degree to which people see a brand as “shaking things up.” (This metric is distinct from a brand’s score on innovation, of which disruption is a component.) While startups tend to get the most attention for disruption, the Fearsome Five are actually the ones changing the world. Using the same scale as for meaningful difference, the average brand scores 100 for shaking things up. The United States Top 100 averages 111, while the Fearsome Five range from 126 to 148.

Part of the reason is scale. All five of these brands generate massive cash flow, which they then divert into innovation. They tend to have much longer time horizons for new products and can go years in development without showing any results. For two examples of disruption, we can look at Microsoft’s HoloLens and Google’s Pixel Buds.

The first is a mixed-reality, holographic headset. Unlike traditional virtual reality, its screen is transparent and the image is not in front of the user. Instead, the device projects holograms into the user’s eyes. That enables HoloLens to turn the room someone is in into a display, in which objects can appear in realistic 3D. You can see a virtual cat sleeping on a real couch or explore entire worlds in your living room. Such innovation requires significant scientific investment and enables Microsoft to create a unique and different offering.

Google Pixel Buds, on the other hand, look like ordinary wireless earbuds. However, they can also do something remarkable: translate 40 languages. Two users, each with no knowledge of the other’s language, can now communicate via a virtual interpreter. This likely is the result of the convergence of two technologies long pursued by the company: its translation engine and voice recognition. By combining them, the brand can offer an experience that’s both useful and entirely different.

In addition, most of these brands don’t merely innovate themselves. They also create ecosystems that can support new, innovative industries. Apple is the most obvious example. It created the iOS, which runs on its iPhone and iPad devices. An entire app-building industry rose up around that, creating network effects that will likely sustain the brand into the future. Microsoft, of course, has done so Windows, which it is now expanding to a wide range of new cloud-connected services. Meanwhile, Amazon now has entire agencies devoted to helping brands navigate its vast ecosystem. 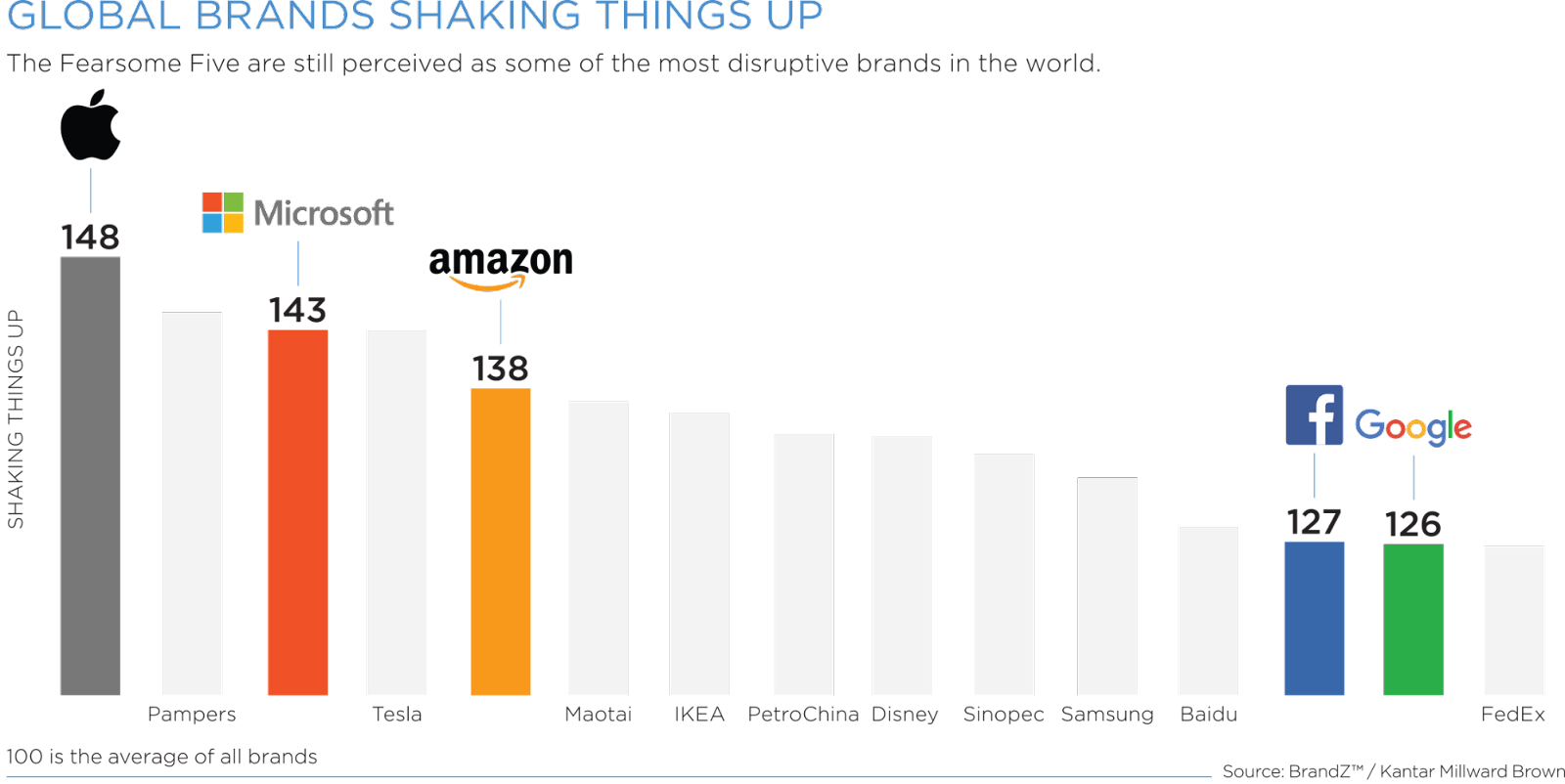 All of this should translate into incredibly healthy brands, and it does. Vitality Quotient, or vQ, is a BrandZ metric that measures brand health by combining scores across five attributes: purpose, innovation, communications, brand experience, and love.  Over time, BrandZ research has found that brands that rate highly on vQ enjoy a number of advantages. They grow faster in value, withstand adversity better, and move into new markets with greater ease. All of the Fearsome Five rate highly on this measure—in fact, four have nearly the same score.

Each, of course, has its strengths. All are very strong on Brand Purpose, a measure of whether or not they make people’s lives better. When it comes to innovation, Apple tops the chart, even though its cycle of producing new, game-changing products has slowed in recent years, demonstrating the long tail that innovation has consumers’ minds. (This slowing trend could easily change course with its HomePod and, perhaps, its long-rumored self-driving car.)

When it comes to communications, Apple and Microsoft—both big advertisers—really shine. All of the brands are strong on brand experience, with Amazon at a very high level, which is unsurprising given its increasingly ubiquitous presence and consumer-first design. And when it comes to brand love, Facebook, with its heavy presence in people’s daily lives, stands out.

We can see the benefits of strong vQ clearly in these brands. In terms of brand value growth, all have grown since 2006, with Amazon the fastest growing American brand by value during that period. In addition to growth, healthy brands can also withstand adversity well, mainly because consumers give them a break when they stumble. Amazon disappointed consumers with its Fire phones, for example, but it rebounded nicely with its Echo devices. Microsoft never really caught on in the smartphone market, but consumers are still happy with its Surface Studio.

Perhaps it’s when these brands move into new areas that we really see the value of a strong brand. Facebook, for example, was able to successfully launch a popular messaging app into a crowded space. Consumers also seem happy with the brands stewardship of the smaller, niche social networks it has absorbed, like Instagram. Amazon has also grown by moving into new areas, notably now with physical stores thanks to its purchase of Whole Foods.

Fearsome effects on other brands

One of the most interesting things about the Fearsome Five is their overall effect on the expectations of consumers. They tend to be masters of the touchpoint, able to anticipate and provide value wherever consumers interact with them. That is raising the bar for all brands, making it necessary for everyone to provide frictionless experiences that remove pain points and deliver a great brand experience.

Moving forward, we can expect these brands to continue to thrive. BrandZ research has shown that a healthy, meaningfully different brand is generally a brand that will not only grow in value, but also do so at a much faster rate than the average brand. So the scariest thing about the Fearsome Five might just be that they’re set to get even more fearsome.