All brands demonstrate strategic use of tech

One word—China—sums up the stellar performance of the Top 20 Risers, the brands that appreciated most in value year-over-year. Chinese retailers JD.com and Alibaba led the ranking with increases of 94 percent and 92 percent, respectively, followed by Moutai, the Chinese baiju, a traditional white alcohol, which rose 89 percent. Around a third of the Top Riser were Chinese, and all the brands demonstrated similar brand-building characteristics—anticipating consumer needs and strategically adopting technology to meet them. Every Top Riser brand increased at least 40 percent in value. A year ago, the threshold was 20 percent.

JD.com and Alibaba invested heavily in developing these ecosystems. Most significantly, both brands made acquisitions to expand in the physical world and complement their presence online, where both brands originated. JD. com has a partnership with Walmart and the Chinese supermarket chain Yonghui. Alibaba acquired a recently-launched grocery chain named Hema Xiansheng. Alibaba also purchased a major stake in Sun Art Retail Group, a hypermarket company that operates Auchan and RT-mark stores in China. And Alibaba has an association with Suning the home electronics and general merchandise chain.

Along with enhancing the customer experience, these partnerships yield data to increase understanding of the consumer’s shopping behavior. In addition, JD.com enhanced its trove of consumer data through partnerships with several leading Chinese online brands, including Tencent, the online portal and China’s most valuable brand. JD.com and Tencent bought a major stake in a Chinese website called Vipshop.com, primarily to challenge Alibaba.

Alibaba has been growing its diverse business, which include cloud computing as well as retail, at around of around 50 percent annually. It is a unique phenomenon, whose impact is best demonstrated by the results of Singles Day, a Chinese fall holiday that Alibaba expanded into a one-day shopping event that, in 2017, generated $25.3 billion, a 39 percent rise over the prior year. The annual active consumers on Alibaba’s retail marketplaces, including Tmall, reached 515 million at the end of 2017.

Tencent entered retail with a pop-up, self-service store in Shanghai, where no employees are present, and all transactions take place using mobile devices. Although this pop-up experiment is not at the heart of Tencent’s strategy, it illustrates the brand’s innovative culture and ability to keep pace with—and even lead—the rapid changes in Chinese consumer life. Tencent added more content, including video and gaming, to its platform.

It invested in artificial Intelligence to enhance its ability to analyze the vast amount of data in harvests from all its products, especially WeChat, the ubiquitous social media platform that reached 1 billion monthly active users. Used for texting, entertainment, and other functions, WeChat is center of Tencent’s digital ecosystem. Tencent’s ad business increased almost 50 percent. To increase its influence outside of China, Tencent purchased significant financial stakes in brands including Snap and Tesla.

In a similar way, the steep value increase of Moutai, the baijiu brand, demonstrates the brand’s ability to understand and meet the needs of Chinese consumers. After several difficult years because of government limits on official entertaining and gifting, sales of baijiu surged, and Moutai was well positioned because of the brand’s premium stature and efforts to broaden its reach. Revenue of Kweichow Moutai Company Ltd. increased almost 60 percent during the first three quarters of 2017, and its share price reached a record high. That increase elevated Kweichow Moutai Company Ltd. to the world’s highest-valued liquor company, ahead of Diageo, the UK-based maker of brands such as Johnny Walker.

Strength in China helped drive brand value across several categories, including luxury and personal care. Especially active in China, Dior promoted its fine jewelry collection with a design point of view, an example of expressing the trend toward playfulness, even at the high end. Shiseido, the Japanese personal care brand, focused on developing its digital strength and prestige image in China.

With its vibrant patterns and colors, Gucci continued to capture the moment and influence both the luxury and apparel categories with a sensibility that fused exclusivity with streetwear. Louis Vuitton attempted to marry timelessness and trendiness. It partnered with artist Jeff Koons, who created a limited collection of paintings—reproductions of some of the great masters—that were printed on Louis Vuitton handbags. The brand continued its association with the street brand Supreme. Adidas exactly captured the streetwear trend in its apparel and also connected with a consumer desire for higher purpose, selling around a million pairs of shoes made from plastic reclaimed from the ocean. Adidas continued to excel at mass personalization. Tesla combined environmentally responsible technology with performance and luxury.

Being on-trend extended into other categories like entertainment, where the ability of Netflix to offer desirable entertainment, like its series The Crown, drove an increase in the number of subscribers, even as subscription prices increased. Netflix stock price appreciated almost 60 percent.

Amazon, which won several awards for its original content, continued to enter more businesses—most recently it investigated banking—and influence how people shop and live their lives. In acquiring Whole Foods, Amazon shook up the grocery industry and gained a physical store presence to complement its e-commerce business. It opened is first Amazon Go store, in Seattle, a grocery outlet that changes the shopping experience with all transactions recorded on the customers smartphone, eliminating the checkout, one of retail’s pain points.

With Alexa, Amazon maintained leadership in personal assistants, and it advanced its Dash button technology for replenishing commodity products by embedding a “Dash” chip in the packaging of certain products. Amazon expanded its range of private-label products into furniture. Amazon entered healthcare in partnership with Berkshire Hathaway and JP Morgan Chase, and continued to expand membership in Prime its subscription loyalty program. Almost two-thirds of US households are Prime members, according to some estimates. Amazon’s web services, AWS, dominated the B2B cloud business.

Adobe, which recognized the shift to cloud computing early, continued to benefit from its prescience, with 84 percent of revenue coming from subscriptions to its cloud services, even as some of its competitors struggled with the shift from their traditional business models to the cloud.

PayPal added more services in an effort to provide traditional banking products and services The volume of its Venmo peer-to-peer payment app doubled, with $35 billion in payments made. PayPal has extended or added partnerships with credit card networks and other tech firms. The stock more than doubled during the past year.

PayPal extended its partnership with Mastercard to global, making it easier for Mastercard to be the default payment option with PayPal. Mastercard completed its acquisition of Vocalink, a fintech company that will enable Mastercard to expand into areas of payment other than payment-to-merchant, including peer-to-peer.

Bank of America, achieved a profit level that matched the bank’s performance prior to the global financial crisis, in 2008, after which financial penalties for regulatory problems diminished profit. The banks stock rose 60 percent, reaching its highest level since the financial crisis.

With operations in 70 countries, Allianz offered a wide portfolio of insurance products, including property and casualty, life, and health, as well as corporate services. Along with buying a stake in the fintech insurance brand Lemonade, the company also acquired businesses in North Africa, Nigeria, and Saudi Arabia, and divested some underperforming assets. These moves, and strong business results, helped lift market capitalization and brand value. 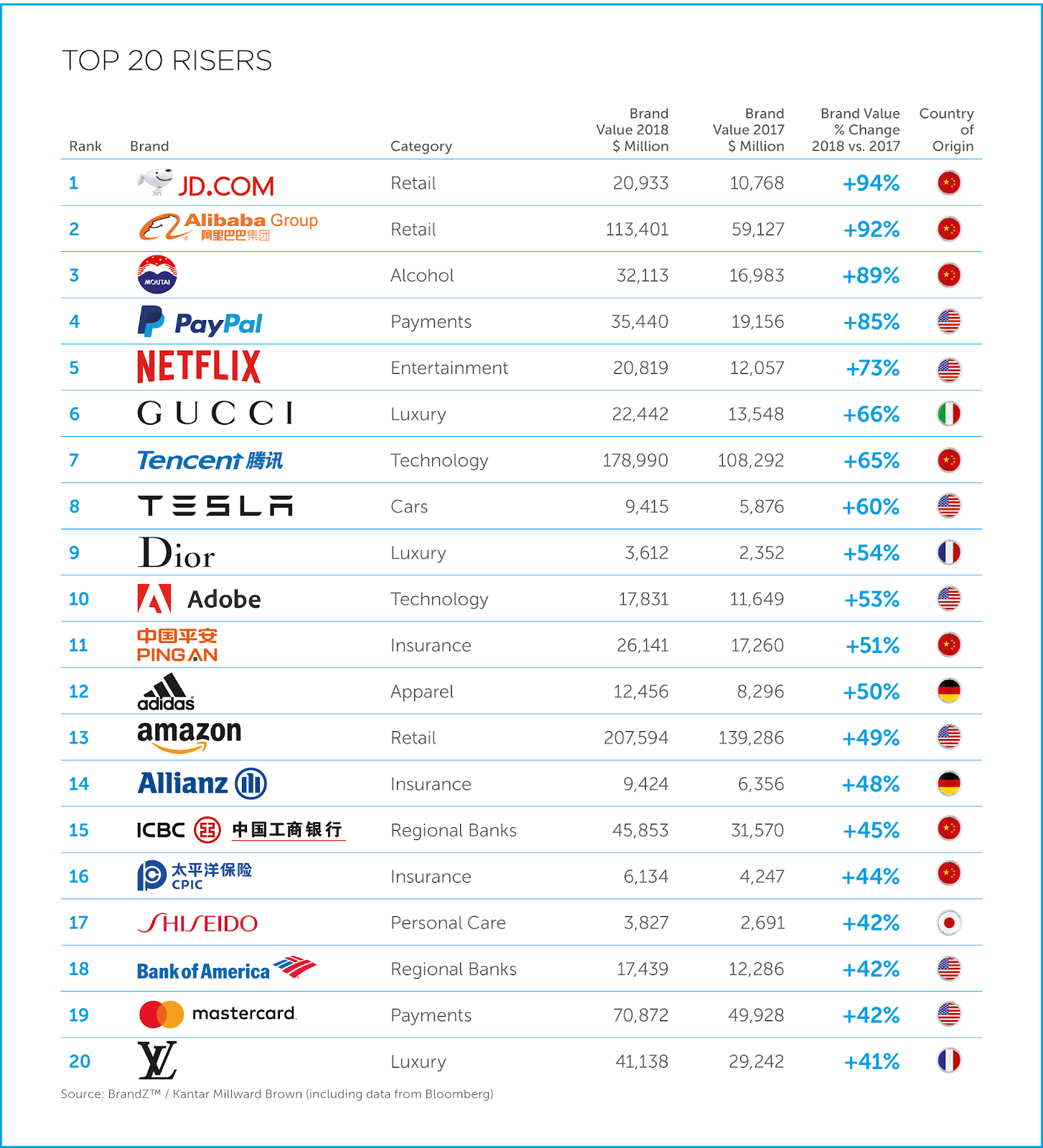