li:before{content:"" counter(lst-ctn-kix_fqjdjybbahom BrandZ is the world's largest brand equity database. Created in 1998 and continually updated. BrandZ is an invaluable resource, containing data on brands gathered from interviews with over 150,000 people every year in up to 400 studies around the world"> brandZ | Report - LatAm
We’ve stopped what we are doing and creating your personalized BrandZ™ report, which will appear in your inbox soon.

The Latin America region returned to growth, with a rise in GDP estimated at 1.3 percent in 2017. This follows six years of economic slowdown, and two of recession. Growth has mainly been fueled by the emergence of Brazil and Argentina from recession: Brazil’s GDP grew 1 percent in 2017 and Argentina is expected to have grown by around 2.5 percent. The BrandZ Top 50 LatAm Brands 2018, however, grew in brand value by 18 percent and are now have a combined brand value of US$130.8 billion, demonstrating that strong and valuable brands recover faster from times of recession than weaker brands.

The Top 10 also posted strong growth, with their combined value up 23 percent in comparison to last year.

Corona, the Mexican beer, became the most valuable Latin American brand, returning to the top spot for the first time since 2014, and bumping  Brazilian beer brand Skol into second place.

Corona has explored Mexican and Latin cultural attributes such as fun to expand globally – the brand is sold in over 180 countries. The brand has placed their product in alluring locations such as beaches, making its product more desirable. Through the campaign “Find Your Beach”, Corona has strongly enhanced this association.

Skol, the second most valuable Latin American brand, has positioned its brand as focusing on young people. By promoting various music festivals throughout Brazil, the brand has strengthened its relationship with this audience.

In third and fourth places are Bradesco and Itaú, the biggest private Brazilian banks. Bradesco stands out in the insurance segment, where brand plays a prominent role in consumers’ decision-making process. Itaú, in turn, is well known for its innovation and efficiency. Despite the rise of fintech brands, these two banks are still important and relevant to the Brazilian financial market.

Telcel, the fifth most valuable Latin American brand, is the leading cell phone services provider in Mexico, with more than 70 percent market share in the country.

The Top 10 ranking is mainly represented by beer (four brands), followed by financial institutions (two brands), retail (two brands) and communications provider (telecel). Over the years the beer segment has been dominant in this ranking, but this year, four beer brands are present in the Top 10, rather than five. In addition, brands in the financial institutions category have achieved their best positions in the Top 10 since 2012. 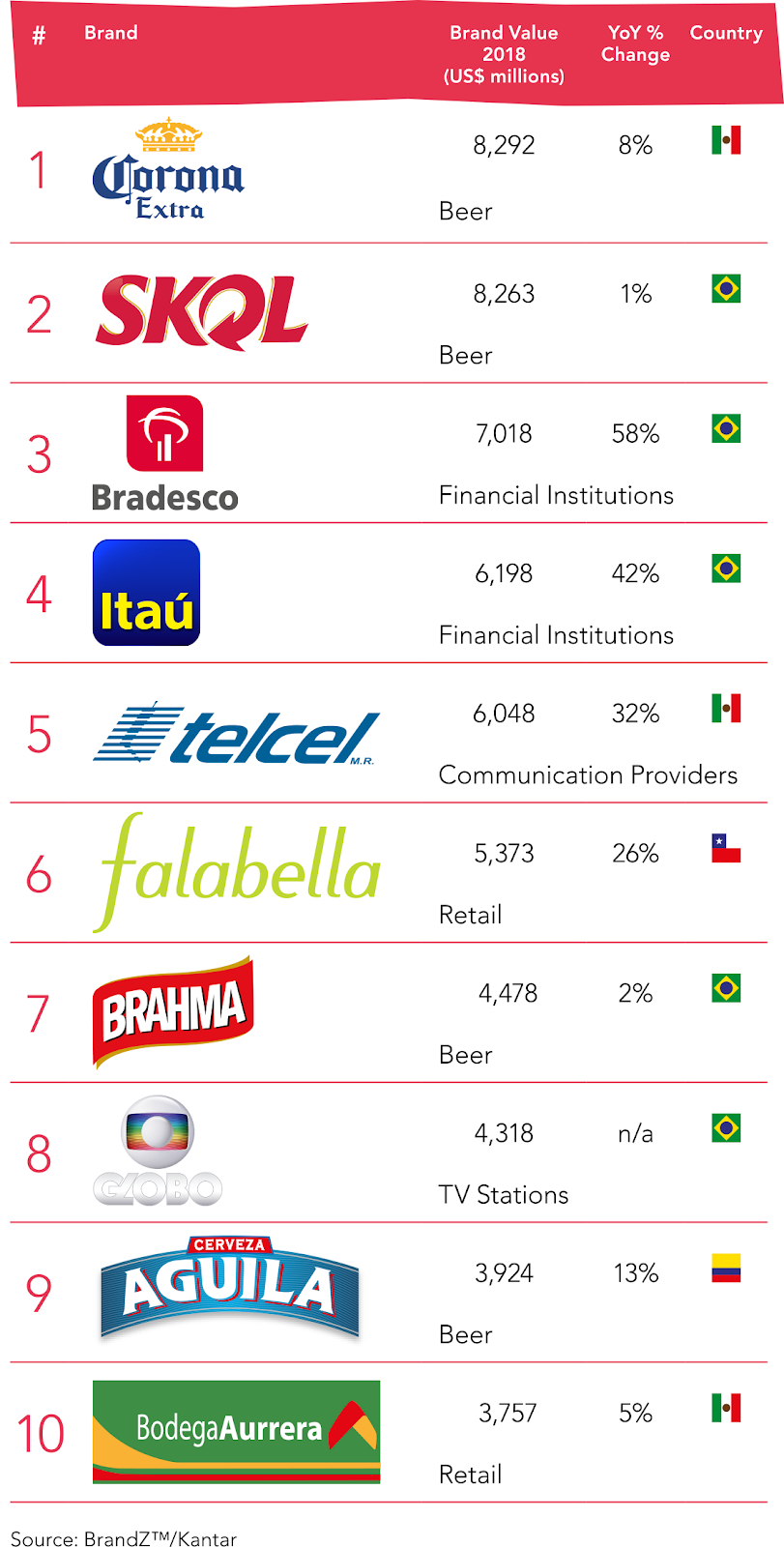 The four beer brands in the Top 10 this year together posted a 5 percent increase in their combined brand value compared with 2017. At the same time, Bradesco and Itaú grew their value by around more than 50 percent. Retail brands held on to positions in the Top 10 despite being pushed down the ranking. Falabella fell two positions and Bodega Aurrera three. Globo (the leading Brazilian TV channel) makes its debut in the LatAm Top 50 this year, in at eighth position. 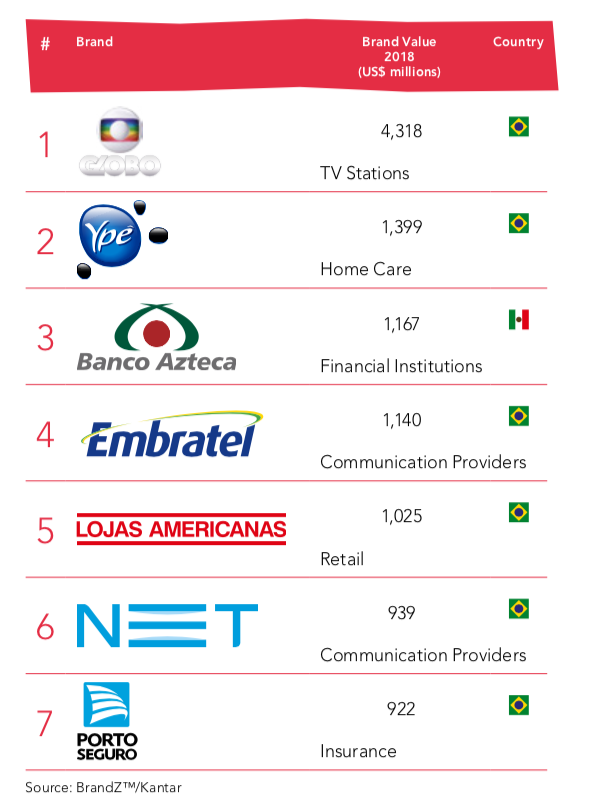 Brazilian brands dominate this list, providing six of the ranking’s seven new brands. This demonstrates that brands are rising as the country pulls out of recession.

For the fifth year in a row, Mexico leads the Top 50 LatAm ranking, accounting for 35 percent of the ranking’s value, with Brazil following close behind with 34 percent share. 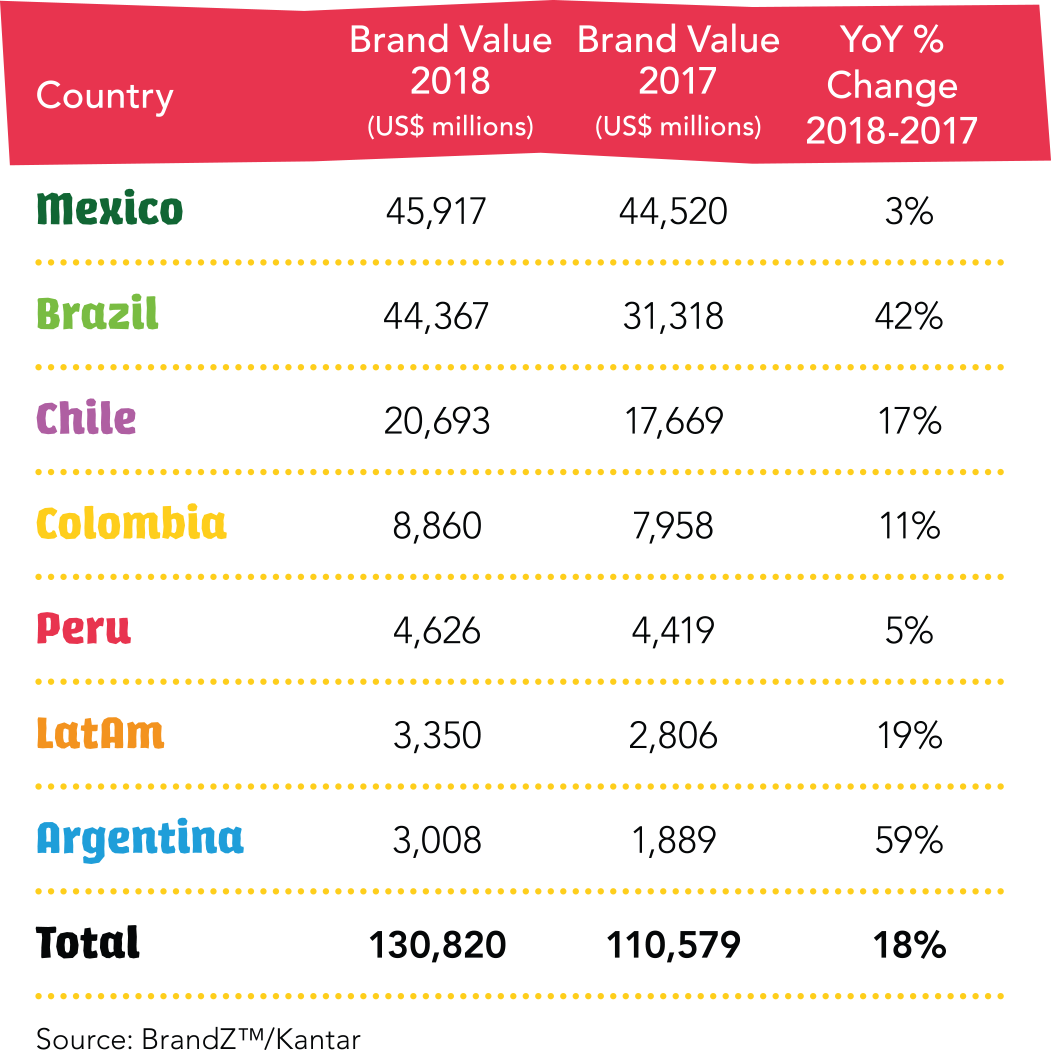 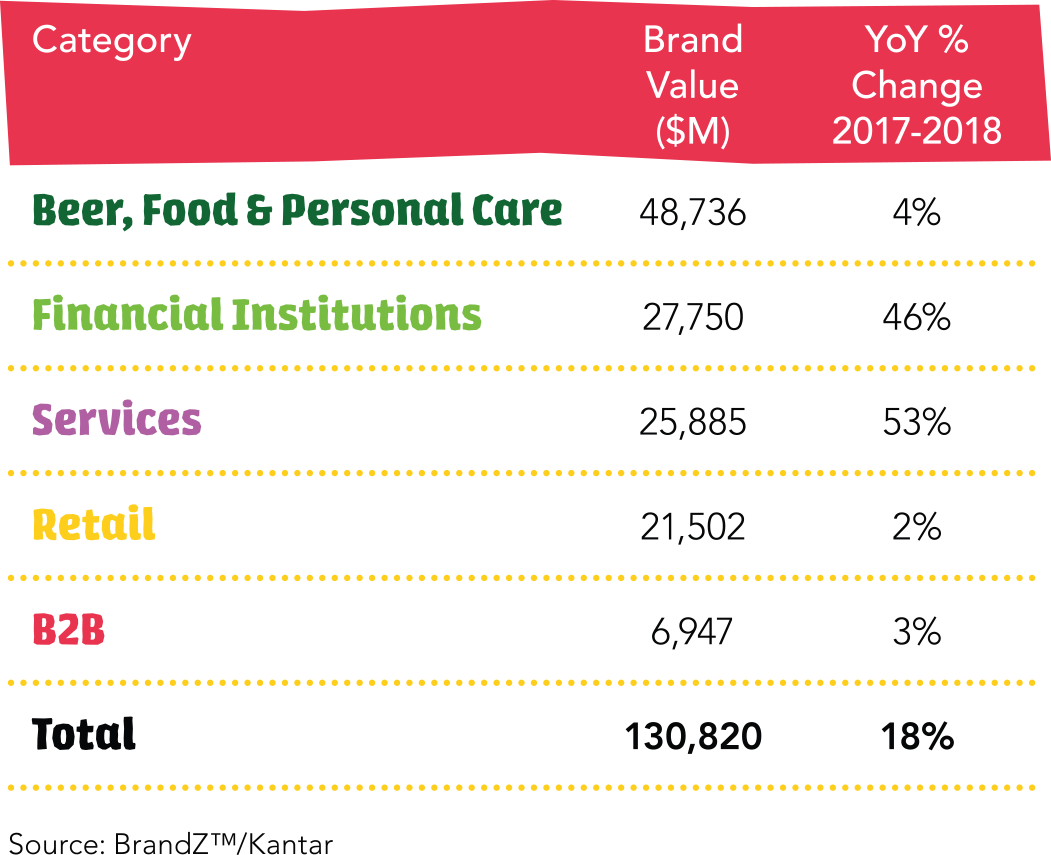 Beer, Food & Personal Care is still the leading category in the BrandZ ™ Top 50 Most Valuable LatAm Brands ranking, responsible for 37 percent of total brand value in 2018, however its influence dropped 5 percentage points in comparison with 2017.

The Beer subcategory remains strong; the Top 2 positions are occupied by beer brands, and the segment contributes 12 brands to the Top 50, representing almost one third of the total brand value of the Latin American ranking. Beer brands with a very clear brand proposition, focused on exploring emotional attributes to meet local needs, are proving highly successful in capturing value.

Brazil and Mexico are important producers and consumers of beer, and this is reflected in their contribution to the Beer subcategory, with shares of 42 percent and 37 percent, respectively. AB InBev and Heineken strongly dominate the markets in these countries, owning a large number of beer brands.

Despite Latin America’s modest recovery in 2017, Financial Institutions (mainly banks) exceeded expectations and increased their brand value by 46 percent in the BrandZ ™ Top 50 LatAm ranking in 2018, and became the second-biggest category in the regional ranking, with a value share of 21 percent.

In terms of growth, among the category’s Top 10 risers, the Top 5 positions are represented by banks from Argentina, Brazil, Chile and Mexico. Throughout 2017, inflation has been relatively stable in Latin America, allowing central banks to reduce interest rates to record levels, bringing significant benefits to banks, especially in Brazil and Mexico. Consolidation in the banking sector in the region – particularly in Brazil – has bolstered both investors’ and depositors’ confidence, reflecting positively in banks’ market value and, consequently, their brand value.

Among the top-ranking Financial Institutions in Latin America, Brazil accounts for the majority of brands and brand value in this category, with 51 percent, and Mexico comes next, with 22 percent.

Retail has overall been stable, with brand value for the category rising by around 2 percent in comparison to 2017. It represents 16 percent of the regional ranking’s value.

The category is notably strong in Chile: the country is the main contributor of Retail brands in the Latin America ranking (57 percent share), and its brands grew 9 percent in the period.

Brazil, the second-biggest Retail contributor, stood out in the period with a 34 percent increase in the value of its Retail brands, reflecting the expansion in household consumption in 2017, stimulated by low inflation. Retail brand value in Mexico, in turn, declined 21 percent in the period.

The structure of retail has been changing in recent years, largely due to disruptive technologies and the increasing number of consumer touchpoints. This new reality has forced companies to rethink their strategies and has made it even harder for stores to attract customers. As a consequence, many retailers have closed stores and shifted their efforts to digital. The fast expansion of internet usage and mobile devices in emerging markets is the reason for sizable growth in e-commerce. The Retail segment in Latin America, where these sales channels are not fully developed, was the weakest-performing category in the Top 50 LatAm ranking, and seems to reflect the fact that this sector is in a transitional phase.

This year, the Services category of the BrandZ ™ Top 50 LatAm ranking includes Communication Providers (74 percent value share of the category), TV Stations (17 percent) and Airlines (9 percent). Services increased their total brand value by 53 percent - the best-performing category in the region - with a total brand value of US$26 billion, representing 20 percent of total value share in the ranking.

This year Globo (a Brazilian TV station) entered the BrandZ ™ LatAm Top 50 and contributed strongly to the category’s growth. Not only that, but Embratel and Net (Communication Providers) also are new to the ranking. Claro, another communication provider that is present in many countries in Latin America, grew in brand value by 19 percent. Embratel, Net and Claro belong to the same group, América Móvil.

B2B brands were the smallest contributor of value to the LatAm Top 50, contributing just 5 percent of the ranking’s total value. In comparison with the 2017 Top 50 ranking, it grew 3 percent in brand value, a strong turnaround following a 29 percent decline in 2017. This category includes Energy (66 percent of value in the category) and Industry (34 percent).

In 2017, commodity prices regained their momentum, allowing a slight recovery in the Energy subcategory following turbulence in commodities in 2016. Industry also stabilized in 2017, particularly in Brazil, after a decline in 2016.

COMPARISON WITH OTHER BRANDZ ™ RANKINGS

Looking at the different countries in Latin America, Beer, Food & Personal Care is the most significant category in Brazil, Mexico, Colombia and Peru. In Chile, meanwhile, Retail emerges as the main industry in the country. Finally, in Argentina, Financial Institutions are the category making the biggest contribution to the country’s leading brands.

Brand growth in the era of fragmentation and hyper-information

The Relevance Of Integrated Marketing In Public Relations