li:before{content:"o "}ul.lst-kix_list_1-0{list-style-type: BrandZ is the world's largest brand equity database. Created in 1998 and continually updated. BrandZ is an invaluable resource, containing data on brands gathered from interviews with over 150,000 people every year in up to 400 studies around the world"> brandZ | Report -
We’ve stopped what we are doing and creating your personalized BrandZ™ report, which will appear in your inbox soon.

A glass half full

A glass half full

BrewDog is a Scottish craft brewery and pub chain operating 48 bars and a hotel. The brand takes an anti-establishment approach to the category and its communications, and has a strong core purpose which sits squarely in the middle of everything it does.

This can be no better exemplified than during the outbreak of COVID-19 when the brand switched production at BrewDog’s distillery to hand sanitiser. But what was the impact of this on BrewDog’s reputation?

To provide meaningful insight we need to look at how all social media, media, search and purchase data intersected. For instance, how a TV news appearance by BrewDog's CEO caused a spike in social media activity, which precipitated an increase in searches. Later on, this data could be further expanded by looking at sales figures.

At 7.35am on the 18th March, BrewDog CEO James Watt went public on Twitter with his hand sanitiser plan. 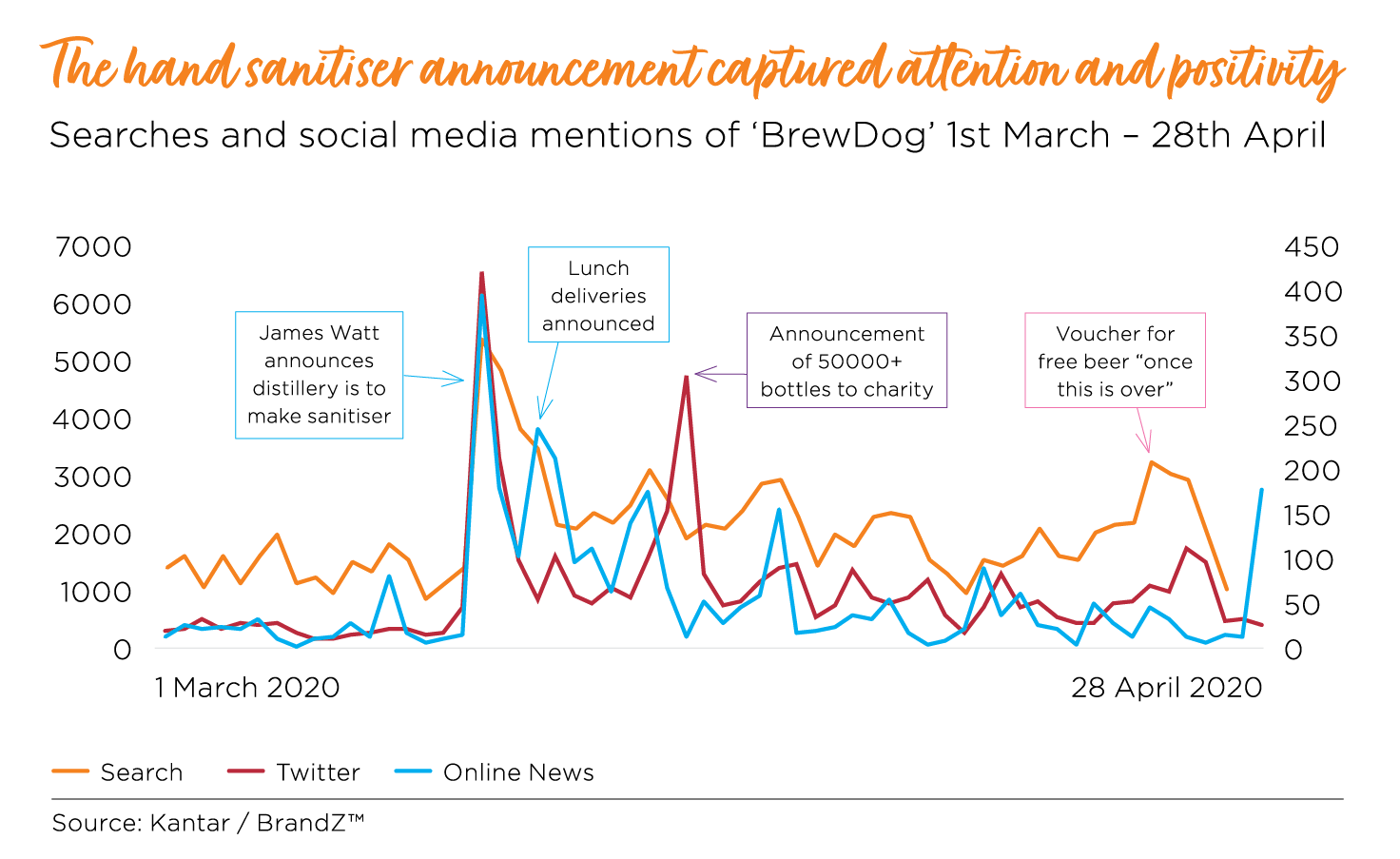 Journalists following Mr Watt shared the tweet, spreading the news quickly, far and wide. Search volume for BrewDog spiked to its highest level. Then there was a minority backlash, and the few comments accusing the brand of “shameless marketing” or “profiteering” were picked up and amplified by the UK media.

James Watt quickly made clear that the sanitiser would be free. This quashed most of the naysayers’ arguments, but then came news on April 2 that the first batch of Punk Sanitiser did not meet NHS standards. The media was again quick to report on this.

Given this coverage, one might assume BrewDog was conducting an act of self-harm. This could not be further from the truth. The naysayers’ voices were dispatched quicker than a Punk IPA in a beer garden on a sunny Friday evening.

But it wasn’t James Watt who put them right. It wasn’t the media, who ought to have been congratulating companies who were stepping up to the plate. It was the great British public. A cross-section of society, from beer lovers and teetotallers to healthcare workers and retirees all raised their voices in support of BrewDog. Many of these people were what Byron Sharp calls “less frequent purchasers” –  the very people that brands need in order to grow.

“The guys at BrewDog are making hand sanitiser, which is pretty awesome right now, so I went ahead and ordered some of their beer”-  Retired person on Twitter

BrewDog went on to successfully deliver thousands of bottles of much-needed sanitiser.

What was the impact on band equity? Applying Kantar’s meaningful and different framework to social media data captured both before and during the COVID-19 outbreak showed the extent to which the brand featured in unpromoted online conversations.

Before the outbreak, BrandZ data showed BrewDog was the strongest brand in the UK craft beer category, scoring highest on our Meaningful, Different and Salient measures. The brand rose eight places up the BrandZ Most Valuable UK Brands ranking in 2019 and is strongly associated with perceptions of quality and happiness. 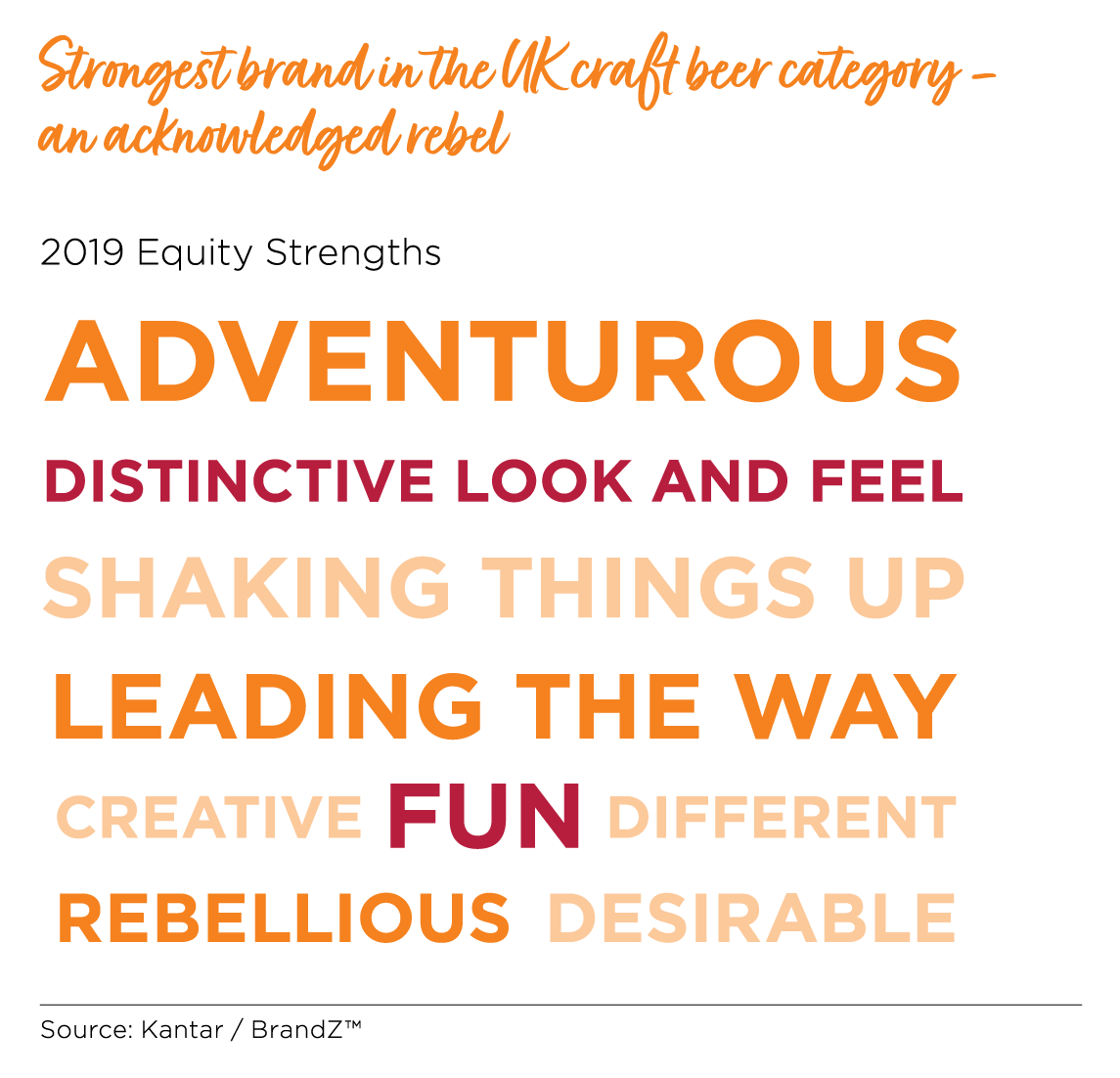 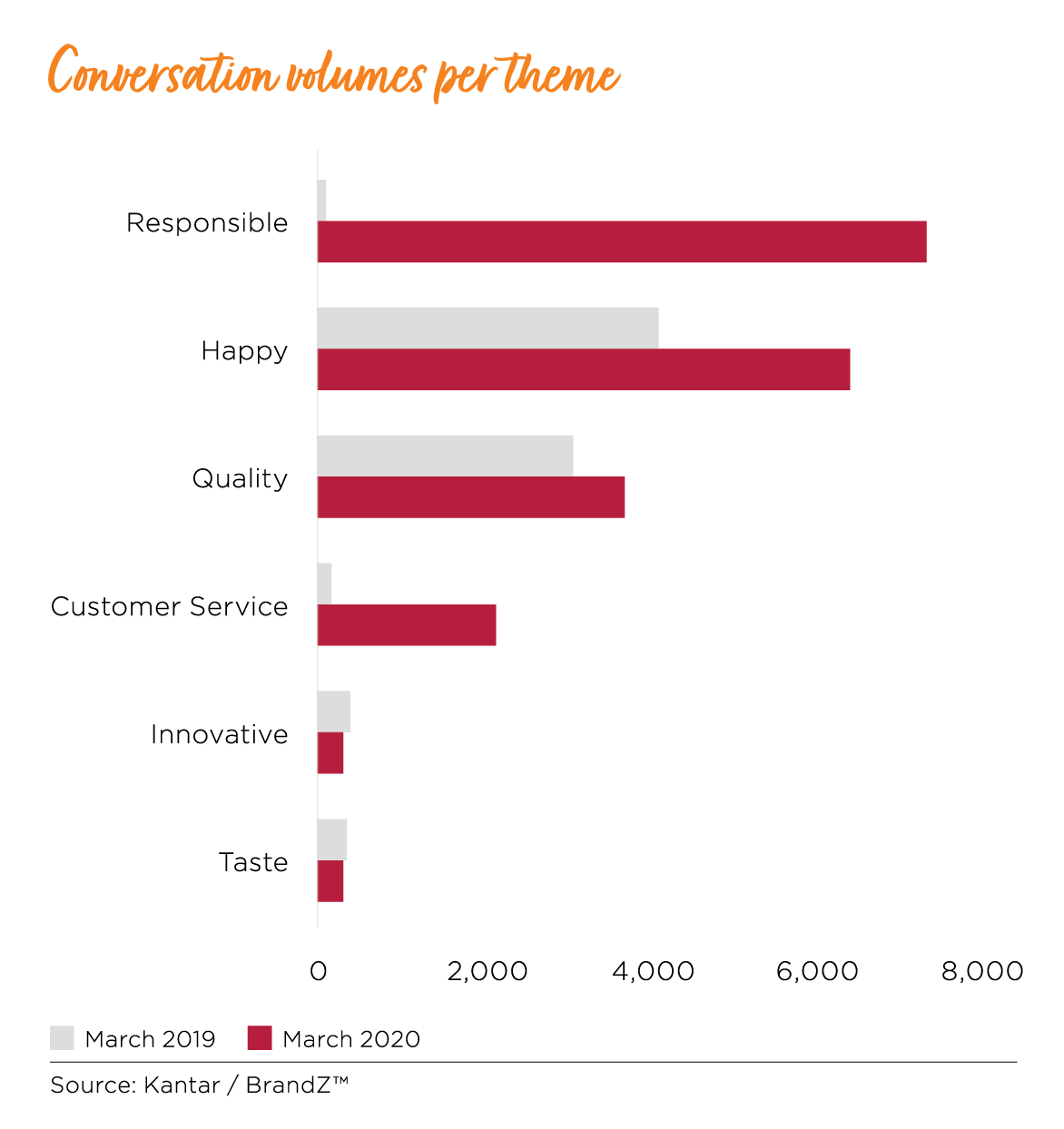 What BrewDog did is fascinating not just because it was successful on several levels, but also because the brand took a distinctly BrewDog approach to the need for hand sanitiser. You can see the immediate impact of this in the online conversations that followed, which reflected happiness, quality, taste and innovation – all perceptions which help to drive meaning and difference.

When March 2020 data is compared with that from a year earlier, what shines through is the public’s growing view of BrewDog as a brand with a strong sense of responsibility.

There are always risks involved in taking bold, newsworthy actions, however BrewDog has set a good example for others to follow. They’ve succeeded by being able to provide answers and actions to the three questions their agency (Uncommon) asked of them when the crisis began.

Question 1: How can we help NOW?

The production of hand sanitiser increased meaning, difference and salience.

Question 2: How must our brands adapt to survive?

Resilience is the key to sustainable growth, and BrewDog’s ability to adapt quickly to consumers’ changing priorities will surely pay off in the long term. Data from our Kantar FMCG Panel shows 107 percent year-on-year growth in online beer sales in April, while the number of people buying alcohol online also doubled between March 1st and April 19th this year.

Question 3: What will the world look like when we emerge from the crisis?

BrewDog offered to shout everyone a free beer when pubs are open again. We know from our social listening and survey data that going to the pub and having a drink with friends are amongst the activities UK consumers are most looking forward to after COVID-19.

The impact of BrewDog’s activity on brand and reputation has been overwhelmingly positive, and can be best summed up by a light purchaser on Twitter who was not loyal to BrewDog before the crisis:

“At the end of this, there will be hero and zero companies. We WILL remember & support the ‘good guys’ who did the right thing” 👏 – Retired healthcare worker

The future of sustainability

Time to toughen up