A growing economy and rising levels of consumption are fueling increasing investment by advertisers seeking to target Italian consumers.

Total advertising spend in 2018 grew by 2.7 percent to almost €7.9 billion, with digital channels the main beneficiary and by far the fastest-growing medium, up 7.8 percent for the year.

While marketing budgets for fast-moving consumer goods are still constrained, the market more broadly has been buoyed by intense competition in the telecommunications sector and continuing privatization of energy suppliers, giving consumers even greater choice.

It was also another big year for sporting action, which always results in a spending surge by advertisers; Italy’s national team failed to qualify for the World Cup in Russia, so investment was not as strong as it might have been, but football fans were still buying TV sets, mobile streaming services, snacks and drinks, and brands were vying for their loyalty.

Online might be winning a growing share of advertiser budgets – it now takes nearly €28 of every €100 spent on advertising, up from just €6 a decade ago – but this is still an incredibly strong television market.

Half of the time the average Italian adult spends with any medium is spent watching television, which explains why 49.9 percent of every advertising dollar spent in the country went on TV last year.

Radio is holding steady, taking 6.4 percent of advertising spend. This sounds low when you consider that nearly a third of consumers’ media time is spent tuning in, but the cost of radio advertising is lower than many other media.

Print is continuing its slow decline (only 2 percent of adults’ media time is spent with a newspaper or magazine, down from 5 percent 10 years ago), and outdoor too is seeing its share of the pie reduced each year.

The proliferation of new media channels and a growing range of devices on which to access them is making media planning an increasingly complex business for brands. Consumers, too, are torn between so many choices, yet many are finding the solution is just to find more time. Italians a decade ago spent seven hours a day with one form of media or another; now, it’s over eight hours. 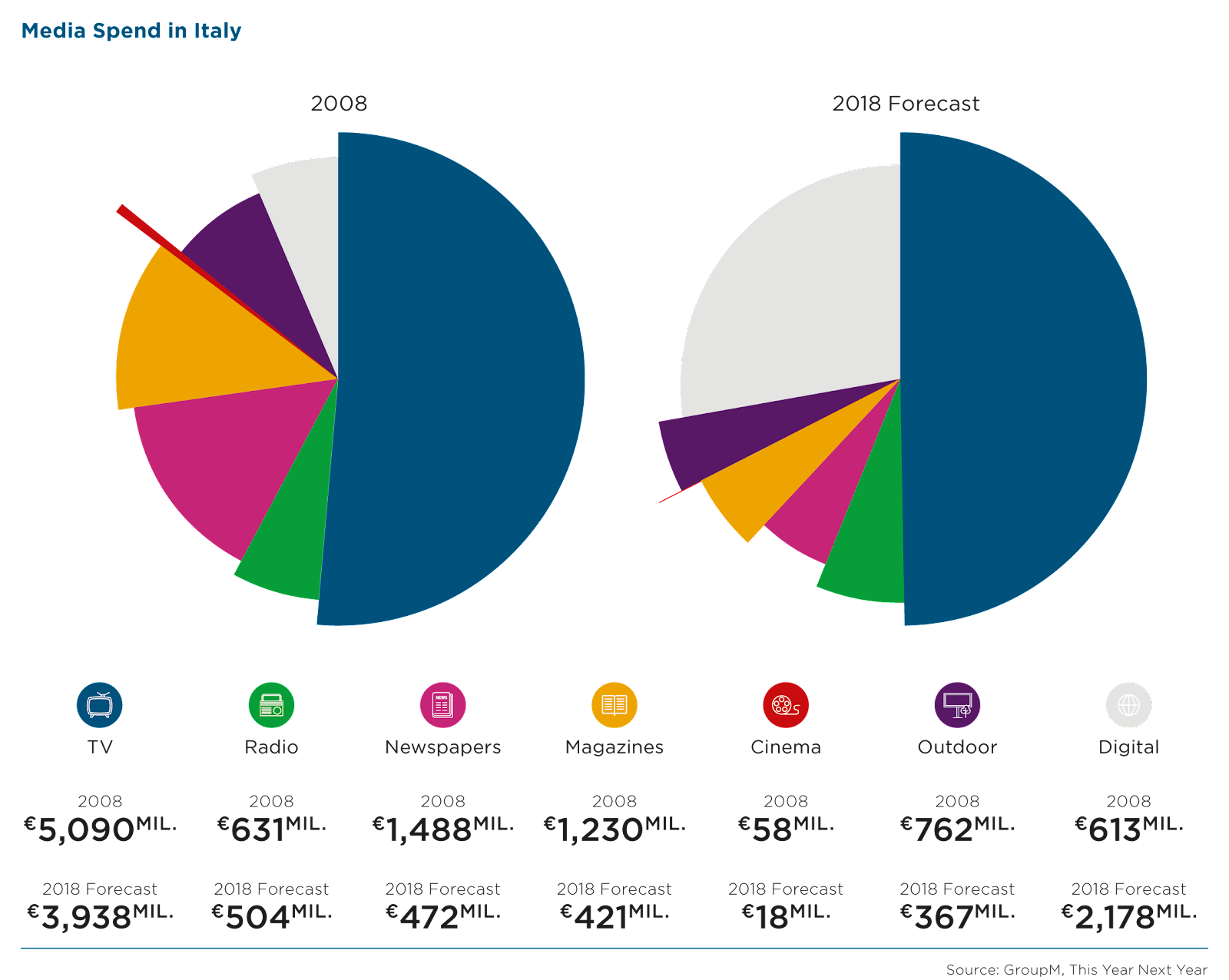 The art of integration is key to how enjoyable and memorable a campaign is perceived to be. Use these rules as a guide:

This video has a romantic, retro feel, beginning with the parting of young lovers on a Milan train platform in 1936. As the train pulls away, the woman snatches the man’s bag of San Carlo potato chips and waves goodbye. The man returns to the platform, apparently waiting for her return, and is seen aging as the decades pass. Eventually, his face lights up as what he has waited 80 years for comes into view – and he snatches a stranger’s bag of San Carlo chips. A humorous way of relating a story about brand heritage.