You might think we live in a golden age for American media buying. Advertisers now have access to an abundant if sometimes bewildering set of technologies that can in theory target people on an individual level. Surely, they should be building their brands with a sniper’s precision, investing heavily to get it right.

In fact, this is another area where general perception crashes against the reality of data. For much of advertising history, media spending has moved largely in lock step with GDP. It rose in good times, fell during recessions, but generally closely correlated with the broader economy.

As America’s economy has fired up to over 4 percent growth, however, its media spending is only expected to increase 2.2 percent in 2019. At a time where corporations are doing better, advertisers are spending slightly less on customer-facing communications.

Some may want to attribute this to the increase in advertising technology spending, thinking that the rise in investments in data and digital are coming at the expense of media. A large scale survey undertaken by GroupM in 2017, however, called this into question. While investments in data and technology have occupied a large part of marketers attention, they are generally small in size and can even introduce efficiencies that pay for themselves.

Instead, the factors behind the trend seem to be that corporations are favoring short-term gains over long-term brand equity. If someone ever writes a history of this development, it might be titled “The Rise of Procurement.” Once a less than powerful force in corporate life, procurement has emerged with its partner, zero-based budgeting, as a potent counterweight to advertising, where the relationship between investment and ROI can be hard to prove. As a result, investment is slowing just as brands are confronting a world where it’s become more and more difficult to have their messages heard.

But if spending is slightly declining overall, it’s also happening in a very lopsided way, with big winners and losers. For the last decade, for example, dollars have been moving towards digital at the expense of all things print. In 2008, newspapers and magazines accounted for 32.2 percent of all advertising spending in the US. In 2019, that number is projected to fall to 14.5 percent. In 2009, digital constituted only 17.5 percent of media spending; in 2019, it stands to rise to at 40 percent.

Another long-term trend over the last decade was that spending in other media had been more or less stable. TV and radio both largely held their own against digital up until about 2 years ago. Now, both of their positions appear to be eroding. 2019 is projected to be the first year TV advertising falls below 40 percent to 39.9 percent, with an anemic growth of 0.4 percent in 2019—well below inflation.

This is a trend seen around the world as OTT services like Netflix, YouTube, and Amazon Prime Video are eroding traditional TV’s market share. They are also bringing competition on the creative front as well, with Netflix alone investing $8 billion in content in 2018.

Likewise, the radio advertising market is also showing signs of weakness after a prolonged period of resilience. It is projected to slip to 3.4% of total spending, as digital providers like Pandora and Spotify may be taking a toll.

Digital media, by contrast, is on a steady upward course. Brands are projected to spend 8.7 percent more on it in 2019, which will mark the first year since 2003 it has failed to notch double digit gains. Still, unlike other areas of media spending, it is growing.

This shows that while a few brands, notably J.P. Morgan, have cut back their digital spending due to brand safety issues, most are continuing to follow users where they are increasingly spending their time. Digital technology also simplifies the process of buying ad space and audiences, making it a popular choice for low effort marketers.

It’s worth noting that digital spending is highly concentrated in the United States. Because the United States has produced virtually all of the major “walled garden” search and social platforms, Americans lack homegrown competitors. As a result, they visit on average 5.1 social network sites per week, compared to 8.4 globally, leaving brands with far fewer choices to reach them.

This also makes social media in the United States more cluttered than elsewhere and complicates the task of brands trying to achieve greater salience through communications. That has in turn fuelled an arms race of technology, with brands investing in everything from programmatic buying to dynamic content optimization. It has also led to some disappointment, with one study finding that nearly 6 in 10 marketing leaders are unhappy with their marketing investments.

Newspapers and magazines in the United States would love to have such problems. For the past decade, they have borne the brunt of digital’s ascent, with no end in sight. Newspapers are projected to lose 11 percent of their print audience in 2019 and slip to a mere 4.9 percent of spending. Magazines should drop to 9.6 percent, a 6 percent shift.

It’s worth pointing out, however, that a few strong news brands have become hybrid publishers like CNN and The New York Times, which own the 21st and 33rd most visited digital properties in the US, respectively. Through a combination of paywalls and advertising, they have not just weathered the controversies over fake news, but thrived in them.

When it comes to the world of outdoor, America has always lagged its peers, a trend that shows no signs of changing, even as new digital marketplaces for it come online. At 2.2 percent of total spending in 2019, this category’s share of marketers’ wallets will have remained essentially unchanged in the last 10 years.

Overall, the United States, at a projected $199 billion, is still by far the world’s largest advertising market. According to Group M, it also retook first place from China in 2018 as the greatest contributor to global growth. In general, the American advertising market remains strong and relatively steady, if not spectacular. 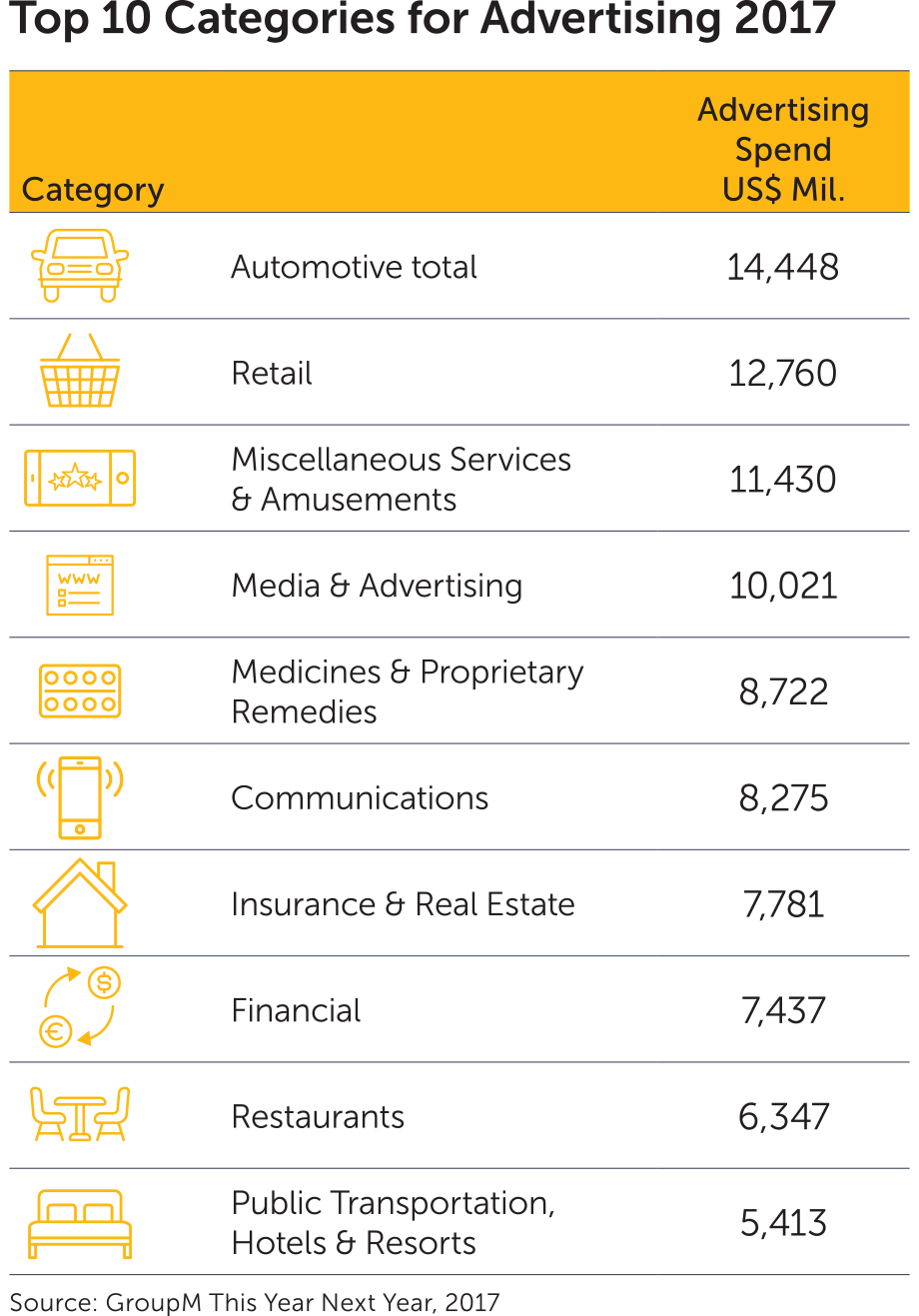 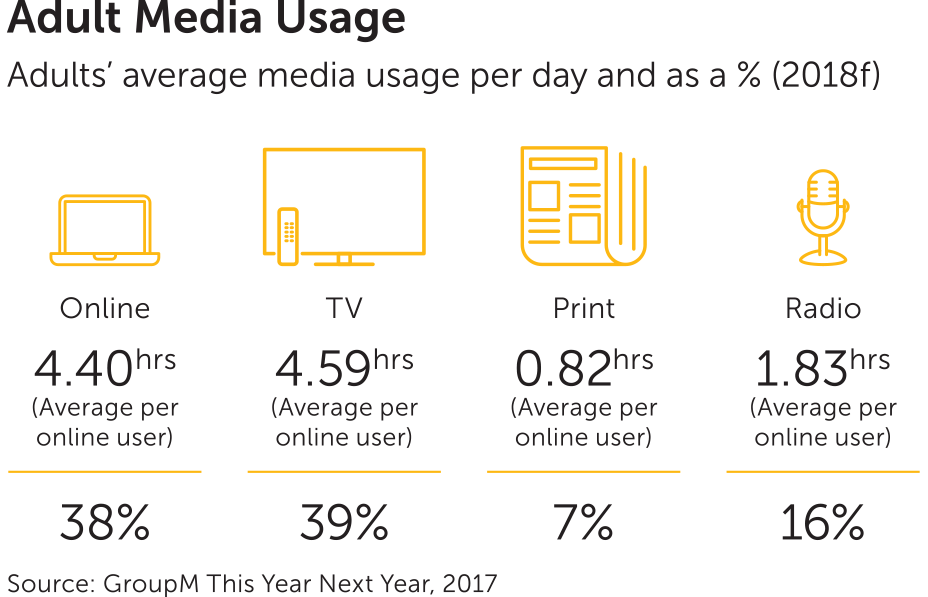 Traditionally, the media world has focused on reach and frequency as the key determiners of success. The more people you reach the more often, the more likely they are to choose your shampoo over another in an aisle at Walmart. While no one should suggest that this basic law of human psychology has changed, we have seen a shift in what drives brand value in US brands. Rather than innovation as a key driver, innovation around brand experiences is making a huge difference in consumers’ minds. As a result, it’s important that some part of advertising anticipate human needs and provide relevant and timely messages aligned with the brand and the value it provides. Today, marketing technology providers enable brands to do just that—so long as they put in the hard work of understanding their customers.

The surprise campaign of the year was certainly Nike’s embrace of former NFL quarterback Colin Kaepernick. For those who don’t know him, Kaepernick was a highly rated player who once took his team to the Super Bowl. Then, in 2016, after a rash of shootings of African-American men, he began taking a knee during the national anthem, which is traditionally played before many sporting events in the United States. This became a flashpoint controversy that spread throughout the league, provoking the ire of President Trump, who repeatedly tweeted about it. It also cost Kaepernick his job, as no team signed him after the controversy began, even though he is certainly a better player than many in the league.

Announced on Labor Day, 2018, the ad was not merely an attempt to be politically correct. Rather, its message of “Believe in something, even if it costs you everything” proved stunningly resonant with Nike’s consumer base, which skews towards younger, more liberal Americans. These customers were thrilled to see Nike reflect their concerns and values in an aspirational message. While the ad did cause some Nike customers to post videos of them burning their gear, in the weeks after, sales surged 31 percent, and investors pushed Nike’s stock price up 5 percent, adding $6 billion to its market capitalization.