How do you define true innovation and leadership?  To me truly leading innovation does more than disrupt the established order; it shapes and creates something genuinely ground-breaking, delivering benefits for all consumers and perhaps even establishes an entirely new competitive landscape in the process.

That is exactly what Amazon achieved in late 2016 with the launch of Amazon Echo, the first of the smart speakers, allowing users to interact with Amazon’s AI interface Alexa using only their voice.  Brands and consumers have been in metaphorical conversation for decades but with the arrival of Echo, an instant two-way narrative became reality for the first time.

The obvious attraction of this emerging category is one of immediacy and convenience in our increasingly busy lives; smart speakers serve up virtual assistance via a physical presence, helping with myriad tasks and questions ranging from weather forecasts and general knowledge queries to arranging the delivery of shopping, takeaway, and taxis direct to our homes.

The Echo is the embodiment of Jeff Bezos’s ‘Always Day 1’ mantra, and by being first to market, Amazon stole a march on the other ecosystem super-brands Google and Apple.  A tactically low entry cost has allowed Echo to build a solid user base quickly and not only become synonymous with the category but quickly establish a range of alternatives for different needs and budgets.

This initial success sparked a rapid equivalent in Google Home, featuring Google Assistant, in April 2017, as well as the much fan-fared but comparatively slow-to-market Apple Homepod, featuring Siri, in January 2018.  Amazon also recognised that the Echo may not appeal to those consumers demanding very high sound quality and so partnered with Sonos to launch the Sonos One speaker (which comes with Amazon’s Alexa built in as standard) in October 2017.

By definition a smart speaker is comprised of two components; the smart element, relating to the intelligence and usefulness of the in-built AI software, and the design and sound quality capabilities of the physical speaker hardware.  Given the numerous different specifications and capabilities available, consumer choice is ultimately defined by the individual’s needs on this ‘smart vs. speaker’ spectrum.  Is the need anchored around superb sound quality or a highly knowledgeable, personable and versatile AI?  For many the reality is likely to be somewhere in between.

So, what can BrandZ data tell us about who holds the upper hand following the initial exchanges in what is likely to be a long-term campaign?  What are the key ingredients for success?

It seems that Amazon is enjoying a clear ‘first mover’ advantage and is by far the most top of mind brand in the category, with 49% of respondents mentioning the brand first when asked to think about brands of smart speaker; more than twice the number mentioning Google (21%) and almost three times more than those mentioning Apple (17%).

Amazon is also perceived to be the most disruptive of the three, perhaps also a result of being first to market and enjoying a short period of exclusivity.  The brand achieves a disruption index score of 165 (the average brand scores 100) versus 150 for Apple and 143 for Google.

Speaking the language of Meaningful Difference 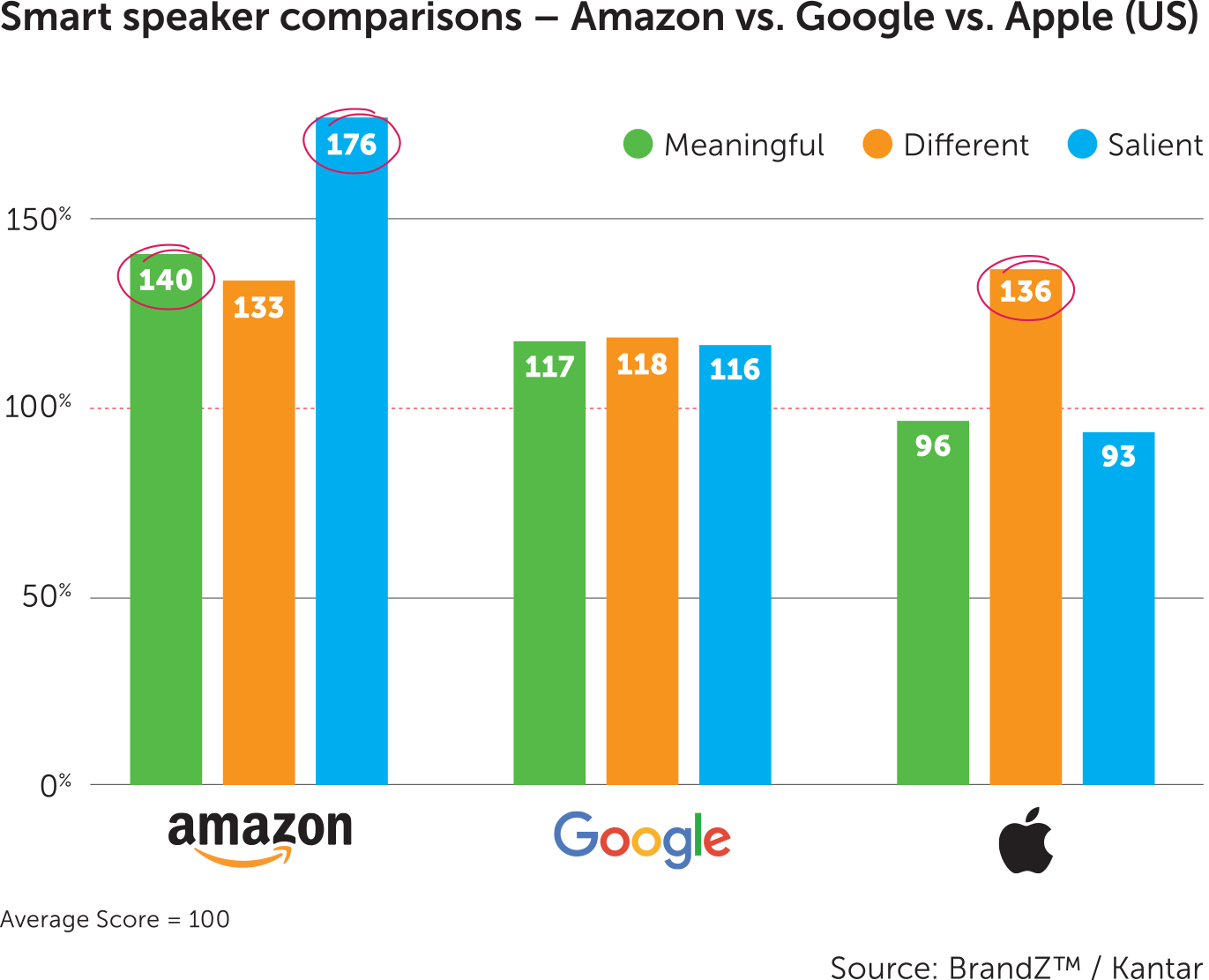 Amazon’s huge salience score of 176 illustrates an immediacy of association with the category, though the brand has also achieved real meaning in a relatively short period of time (meaningful index 140), indicating both functional excellence and the beginnings of a strong emotional connection.

Google is also reasonably meaningful (117) and the second most salient brand (116).  Though the brand scores well on difference (118) it lags some way behind both Apple (136) and Amazon (133) in this regard.

As is often the case with its products, Apple’s smart speaker is very much defined by these huge perceptions of difference, likely driven by high spec speaker hardware delivering best in class sound quality.  Given Homepod’s comparative lateness to market however, perhaps not surprisingly it is found wanting in terms of both salience (93) and meaning (96).

Clearly the three brands have different pricing strategies, which is also a key consumer consideration. Amazon and Google are operating at a relatively low price point in a bid to attract consumers based on the depth of their functionality. Amazon Echo has a huge range of skills and partnerships for users to draw on, as well as the ability to order products direct from Amazon’s vast range; while Google Assistant has the advantage of linking to Google’s vast search capabilities to answer a huge range of questions as well as established retail partnerships that allow a voice shopping catalogue of its own.  By contrast Apple Homepod is around three times the price, which is driven by the quality of the aforementioned hardware.  The key question is if this is enough to justify such a price differential when many consumers are likely to make their choice based on more than sound quality alone.

What are the battlegrounds for success and how does each brand perform? 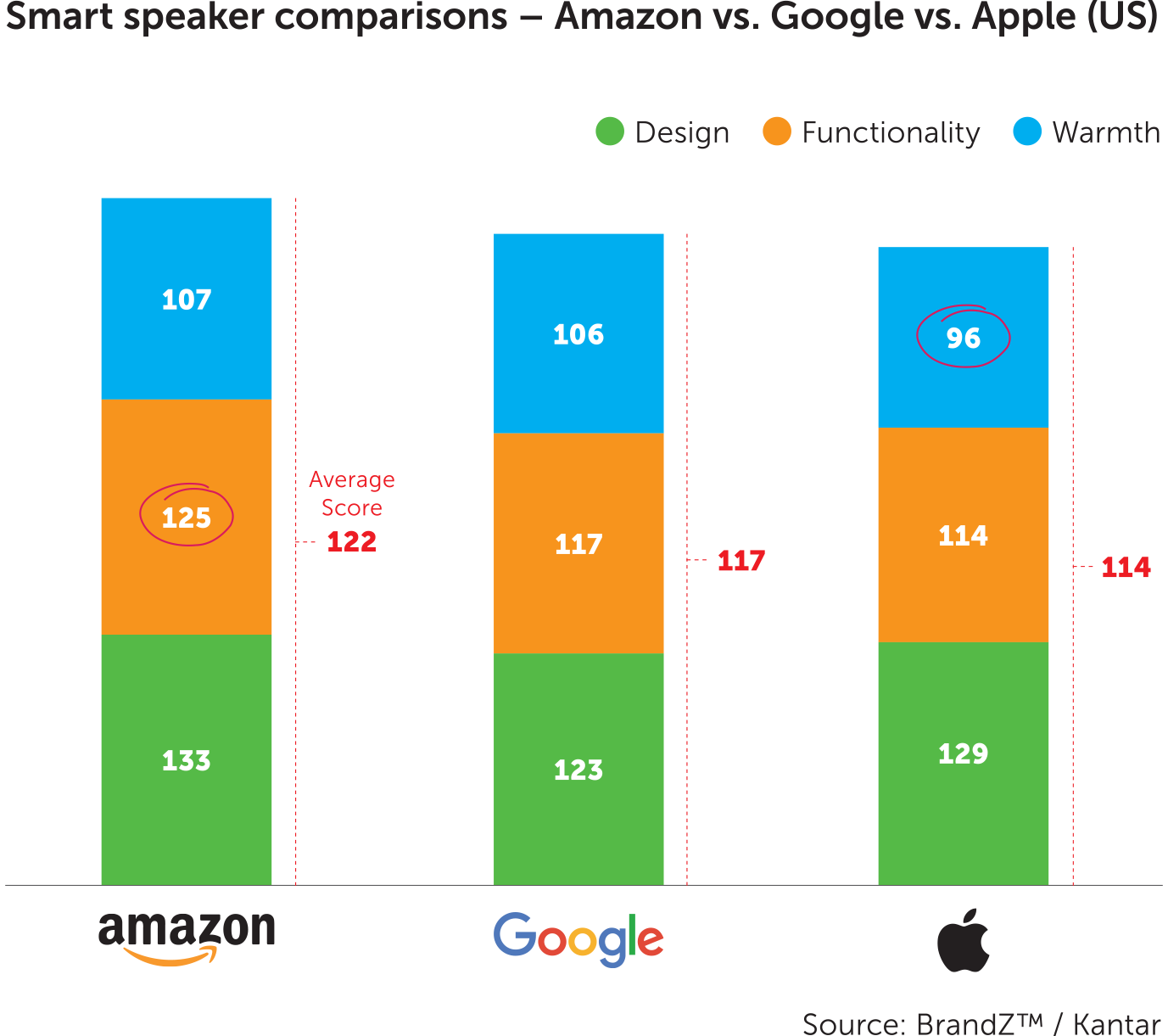 Work better than others, Range of services, Straightforward, Knowledgeable

Echo is deemed to deliver all around competence and a wide range of services.  Homepod may have the edge in sound quality but perceived issues with the comparative sensitivity and capabilities of Siri are a clear issue vs. the excellence of Alexa and Google Assistant.

Though all three brands are fun and enjoyable to use (likely an effect of the initial novelty factor), Homepod underperforms in terms of perceptions of being both ‘playful’ and ‘friendly’ vs. Echo and Google Home.  Again, this is likely to be due to the shortcomings of Siri as a more robotic and less personable presence than either Alexa or Google Assistant, leading to a less ‘lifelike’ conversation experience.

In a category that didn’t exist just 18 months ago, the sheer scale of investment and growing pace of innovation illustrates the high stakes, as the main players strive to achieve next level consumer relationships.  Further technological advances and investment are certain, as well as an increasing importance in striking the right deals with the right partners to improve brand experience and attach ever more capability.  There are clear opportunities here not just for the smart speaker brands but for brands from many different categories to expand reach well beyond traditional barriers.

After the first shots in the smart speaker battle it seems that substance and meaning with a dash of style is the formula for success.  Amazon has gained a hard-won advantage, but can it stay ahead of the pack?  The next phase of the conversation starts now. 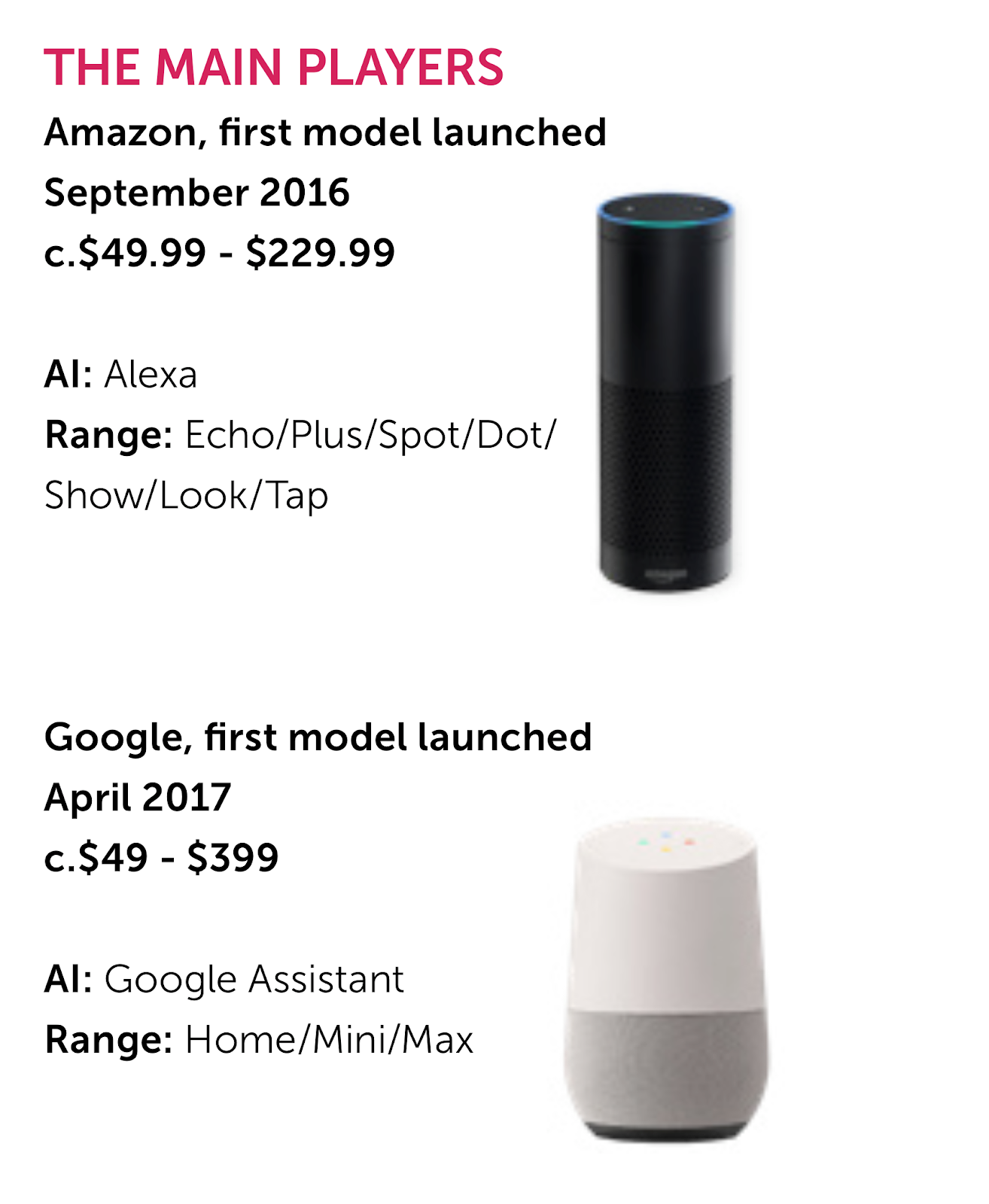 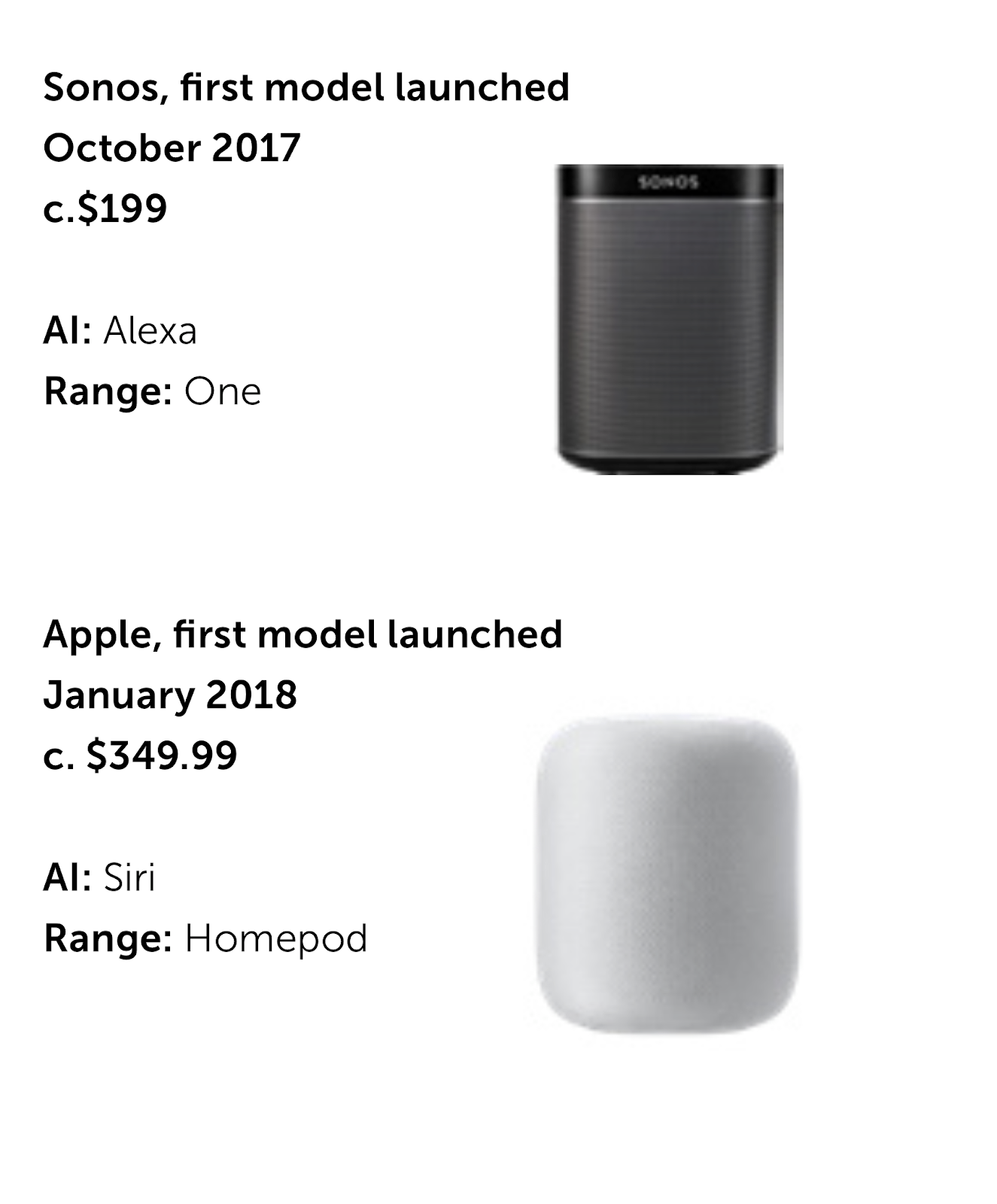