During a period when total brand value for the India Top 75 declined by 6 percent, the category-level view told a more complicated story. While many prominent brand categories saw double digit percentage declines, others saw strong growth.

Normally such results would be described in language of category “winners and losers” — but to do so in this report would be inappropriate, given that the “game” at hand involves responding to a series of unprecedented economic and humanitarian challenges in the age of COVID-19. What these category-level results do capture, however, are the complicated and uneven ways that India’s economy has responded to the shocks thrown its way in 2020.

Consider, for starters, the Top Five largest categories in the Top 75 in terms of total brand value.

India’s second-biggest brand sector in 2020, Telecom, was the fourth-biggest in 2019; this year it grew by a quarter and leaped ahead of both Technology and Insurance on the category ranking. Rounding out the top five categories for 2020 is Retail, which grew by nearly a third over last year. The Automotive sector, meanwhile, fell from being the fifth-largest sector in 2019 to the ninth-largest in 2020. 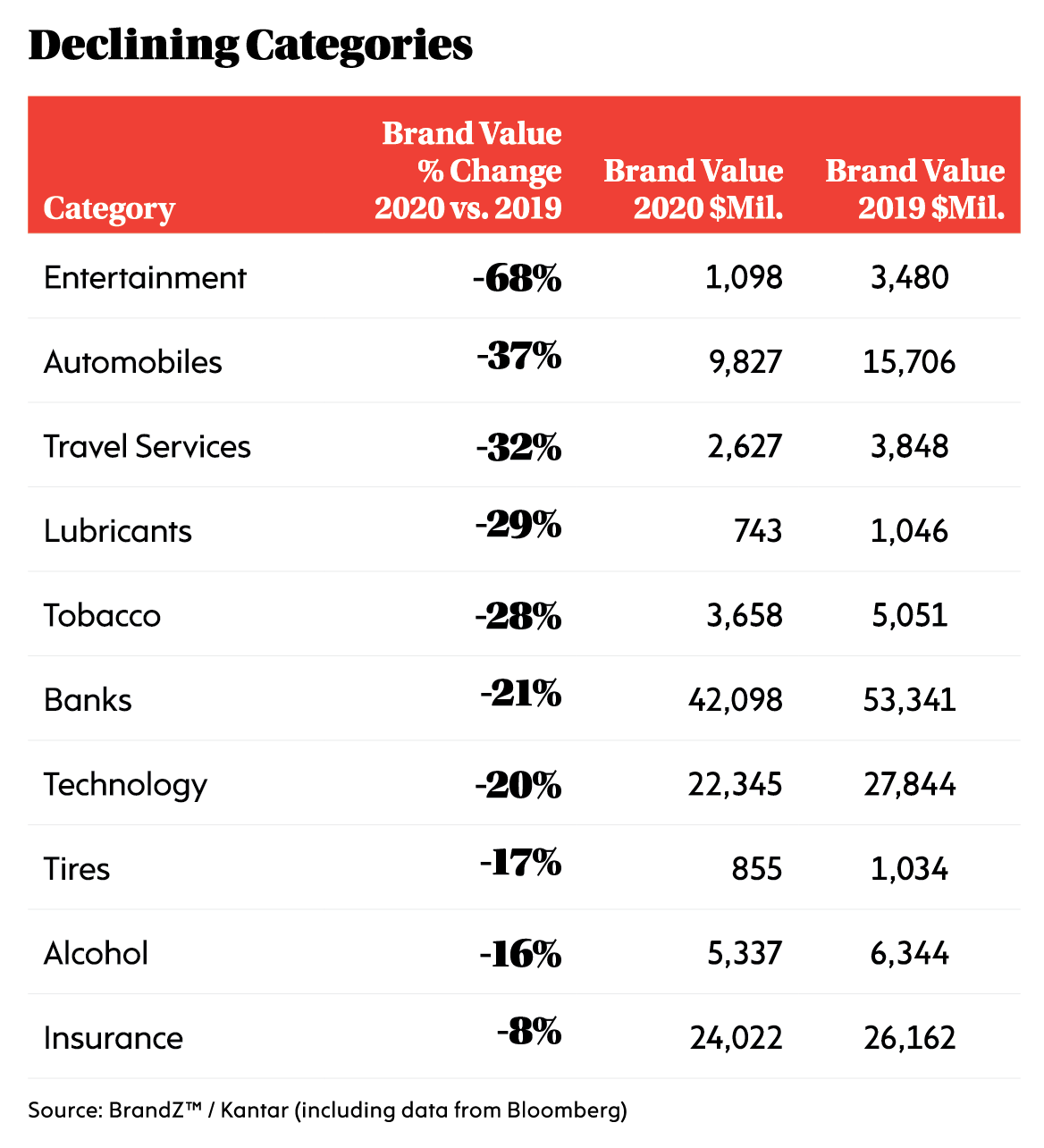 India’s car industry was not alone in facing strong headwinds in 2020. Prominent sectors such as Banks, Travel, Tobacco, and Technology also declined by a fifth or more in total value. Alcohol and Insurance also fell in value this year.

These declines make sense in the context of an Indian economy that was already showing signs of contraction - and declining household income and consumer confidence - before the COVID-19 shutdown. What’s interesting, however, are the ways that current moment may also create new conditions for these categories’ recovery.

The automobile industry, for instance, had recently faced disruptive competition from rides-hailing apps. Now, however, it may have an edge as personal transport vehicles become seen as the more “safe” and “sanitary” alternative to the sharing economy. (So, too, do short-range road-trips seem like an attractive alternative to long-haul vacations - with implications for both the Automobile and Travel categories).

In the Banks category, mass quarantines have brought many new consumers to the world of online finance - including older Indians who had previously been wary of e-banking.

Insurance, too, may get a new look from Indian consumers if brands’ messaging is right; although the sector has always been less widely embraced in India compared to other major economies, the risk management benefits of insurance have never been more clear, or appealing. 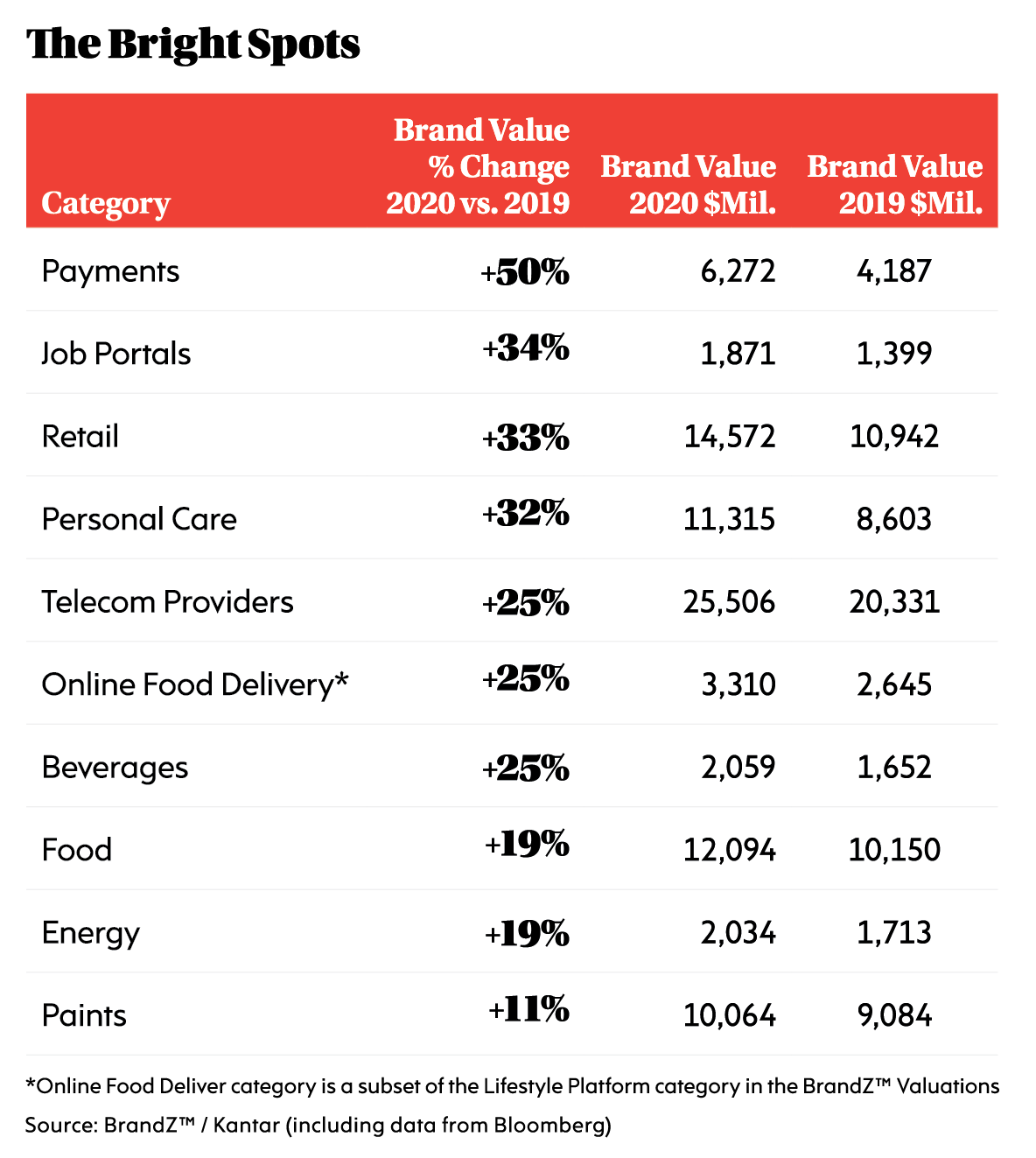 The two categories with the largest percentage growth for 2020 are the Payments and Job Portals categories, with increases of 50 and 34 percent, respectively. These, however, are both categories represented by single brands in the BrandZ™ India Top 75: PayTM, which notched that impressive 50 percent growth figure, and Naukri.com, which had an almost as impressive year.

Equally notable, then, are the larger, multi-brand categories that managed robust growth in 2020. These include Retail, which increased by 33 percent thanks to growth by brands like Flipkart, D-Mart, and Reliance Retail. Personal Care grew nearly as fast, with an overall increase of 32 percent. That figure was buoyed by strong growth from brands like Lakmé and the newly renamed Glow & Lovely, and also by the Top 75 entrances of Dove and Closeup.

Telecom grew by 25 percent in 2020 after a 9 percent growth rate the year before. This upswing was due to continued strong performance from upstart provider Jio - but also from established provider Airtel, which also ranks as one of this year’s individual “Top Risers”.

Going forward, Indian brands of all stripes and pedigrees will have to work hard to maintain their positioning into 2021. Brands that are part of these “Top Categories” no exception. Some sectors that saw growth in 2020, such as Personal Care and Fast Food, will have to contend with the fact that Indians are leaving home less often - and thus may exhibit less demand for their category of offerings. Retail brands, meanwhile, will need to balance their growing e-commerce operations with a careful shift back to in-store service during the months and years to come.

Other growing categories, such as Telecom, Home Appliances, Home Care, Food, and Paints, may seem especially suited for an era in which consumers feel inclined to stay indoors. But even these relatively well-positioned categories will have to contend with the immovable reality of declining household incomes: Indians will simply have less money to spare, even for the things they actually want to buy. Quarantine-friendly brand categories will have to adjust their brand strategies accordingly: What worked this year may not achieve the same results during a more prolonged period of de-growth.