Banks sought new growth opportunities, sometimes outside of their core businesses. While primarily focused on high wealth customers, banks also invested in technology to bring money management benefits to more people. With slower growth in mature markets, along with Latin America and China, all but one global bank lost value. The BrandZ™ Global Banks Top 10 declined 8 percent, following a 24 percent rise a year ago.

The growth initiatives followed a decade recovering from the global financial crisis, paying fines, and adjusting to new compliance requirements. Their confidence renewed, banks adapted to recent technologies, including artificial intelligence and blockchain, and attempted to meet the rising expectations of consumers who sought greater control of their personal finances.

Meanwhile, fintech brands both encouraged and responded to this consumer desire for financial literacy and control. The fintechs, such as UK-based Monzo and Revolut, provided an experience that was transparent and intuitive, empowering consumers to manage their day-to-day spending.

Open banking regulations, promulgated by the EU early in 2018, permitted banks to offer financial dashboards that combine all the customer’s financial activity across all banking relationships. But building online open banking capabilities requires significant investment. To fund the investment, and build more trusted relationships in online banking, many banks closed physical branches, which had been vital touchpoints for building customer trust.

As online interaction increased, banks also faced the challenge of brand differentiation because the user online experience, similar across banks, usually lacked a distinctive tone. As some banks closed branches, other banks renovated them, adding cafés and consultation services to balance high tech with high touch.

HSBC introduced a sound signature, an auditory brand asset, reflecting greater confidence compared to just a few years ago when, like many banks, HSBC adopted a lower profile. HSBC communicated the message “Together We Thrive,” and introduced its version of open banking, called Connected Money. ING Bank, which has reinvented itself as a more agile bank, offer an integrated banked app called Yolt.

J.P. Morgan, the only global bank brand to rise in value, with a strong profit performance, became the first bank to introduce its own crypto currency. Called JPM Coin, the digital currency is intended to move money more quickly among corporate clients. Santander introduced a blockchain app for its retail clients to transfer money internationally.

The investment bank Goldman Sachs introduced its online retail bank, called Marcus, in the UK, with a relatively high rate of interest on savings. The product, launched in the US two years ago, is intended to help retail customers manage their money and grow their wealth. In exchange, the bank gains more customers and their data, and the possibility of transitioning these customers into the bank’s core investment business. In another sign of its commitment to retail banking, Goldman Sachs partnered with Apple to offer a new credit card.

BlackRock, another investment bank that primarily manages the money of high wealth individuals, asserted its desire to bring banking to underserved groups, an initiative that is about changing behavior and encouraging more people to become investors as a way to achieve financial health. To effect change, the brand intends to create a more diversified workforce.

It also plans to become more relatable to young people who are attracted on online brands like Financial Gym or Acorns, a micro-investing site, which includes Blackrock among its investors. To reach people planning for retirement, Blackrock is collaborating with Microsoft to create online tools for managing money and investment.

In contrast to the Goldman Sachs and BlackRock moves into retail banking, Lloyds, the UK retail and commercial bank, ventured into asset management in a tie-up with Schroders, a UK investment bank. The arrangement leverages Lloyd’s client portfolio and Schroder’s investment expertise.

Like the banks, payment systems also responded to disintermediating technologies like blockchain. Visa and Mastercard tried to build a set of equities, and a sense of trust and reliability to future-proof their brands against a time when financial transactions might be possible without a mediator facilitating the payment.

Mastercard removed its name from its logo, leaving the intersecting red and gold discs to represent the brand, along with an audio identity, a melody that plays to mark transactions and to accompany the brand’s visual identity when appropriate. Stripping the name Mastercard from the logo reduces the association with a plastic card. The additional of an audio identity anticipates the growth of voice transactions.

Visa has an auditory identity, a chime. To encourage the transition away from cash, Visa planned to introduce cards that speed checkout time by transacting with just a tap. That action follows a campaign about how consumers benefit from a cashless society with more seamless transactions and easier budgeting and record keeping.

The transition to a cashless society was most advanced in China, with Alipay and WeChat Pay. These payment platforms disintermediate the credit cards. They enable consumers to shop and pay for merchandise and services without leaving the enormous ecosystems of Alibaba or Tencent. In the West, the transition to cashless payments is proceeding more incrementally with some exceptions, like Sweden, where most people do not use cash and thousands pay using a chip embedded in their hand.

Meanwhile, Paypal acquired iZettle, the Swedish company whose technology enables small business to accept contactless payments. Goldman Sachs and Apple announced their plans to co-brand a credit card. The collaboration between two prestigious brands fulfills complementary objectives. Goldman gains access to a younger group of customers with capital and investment needs that should grow over time. With a financial services partner, Apple adds an important loyalty-building service to its ecosystem.

All these developments reflect the faster growth rate of payment ecosystems compared with the growth rate of global banks. Over the past 10 years, the payment ecosystems ranked in the BrandZ™ Global Top 100 have increased 801 percent in brand value. In contrast, the global banks ranked in the Top 100 increased only 49 percent over the same period.

Local market fluctuations affected all regional banks, even in North America and Australia, which has gone around three decades without a recession. The impact of the local economy was most pronounced in China because of slower expansion.

Regional banks also struggled with some of the same tensions as their global peers. The regionals are attempting build their online presence to match the customer experience of start-up fintechs while, at the same time, they are attempting to control costs, reduce their physical footprint, and sustain customer trust.

HDFC Bank also continued to add several hundred branches annually to reach people throughout the country. The privately-owned bank, which operates around 5,000 branches throughout India, has consistently produced high margins, largely avoiding the problems encountered by other Indian banks because of non-performing loans.

In the US, banks benefited from higher interest rates and lower corporate taxes under the revised tax law, although volatility at the end of 2018 hurt full-year results. Bank of America improved profits, especially in retail banking and wealth management. Chase, the retail arm of J.P. Morgan Chase, continued to add branches and announced plans to develop a healthcare company in partnership with Amazon and Berkshire Hathaway.

Canadian regulations aimed at restraining the housing market made it more difficult to obtain a mortgage, affecting results for both RBC and TD during part of 2018. Ultimately, economic growth, higher interest rates, and US tax changes drove strong profits for the Canadian banks. US retail business particularly helped TD’s results.

Although most banks had moved on from the improprieties and major fines that impacted the industry following the global financial crisis a decade ago, Wells Fargo, in the US, and Commonwealth Bank of Australia, continued to face regulatory scrutiny.

Wells Fargo agreed to pay a fine of $575 million and issued an extensive report about misdeeds over the past several years, including fraudulently setting up customer accounts without notifying the customers. The most recent fine brought the total of settlements payments made by Wells Fargo to over $4 billion. Meanwhile, the Federal Reserve continued to restricted Wells Fargo from growing in assets. And the bank’s CEO retired.

Large global banks often state their purpose as increasing society’s prosperity. Too often that purpose does not resonate with people. At worse, it seems disingenuous. Banks need to be more specific in their communications about how they help society. They need to do a better job explaining how they positively affect the lives of customers.

Banks sometimes lose focus as they rush to add expertise in artificial intelligence, fintech, blockchain, and other capabilities. Consumers can potentially become confused or disengaged. It is important for banks to do at least one focused communication each year that announces the changes and related improvements in the customer experience.

Banks need to focus on improving their customer centricity. Customer centricity means understanding what customer segments the bank is best set up to serve. This goal can be difficult for global banks that, by definition, are set up to do everything. It means that growing long-term may require first slowing down and focusing.

Banks need to sustain trust as they close branches, key trust-building touch points, to fund their online digital business, where investment in creating positive and differentiating customer experience will be critical. 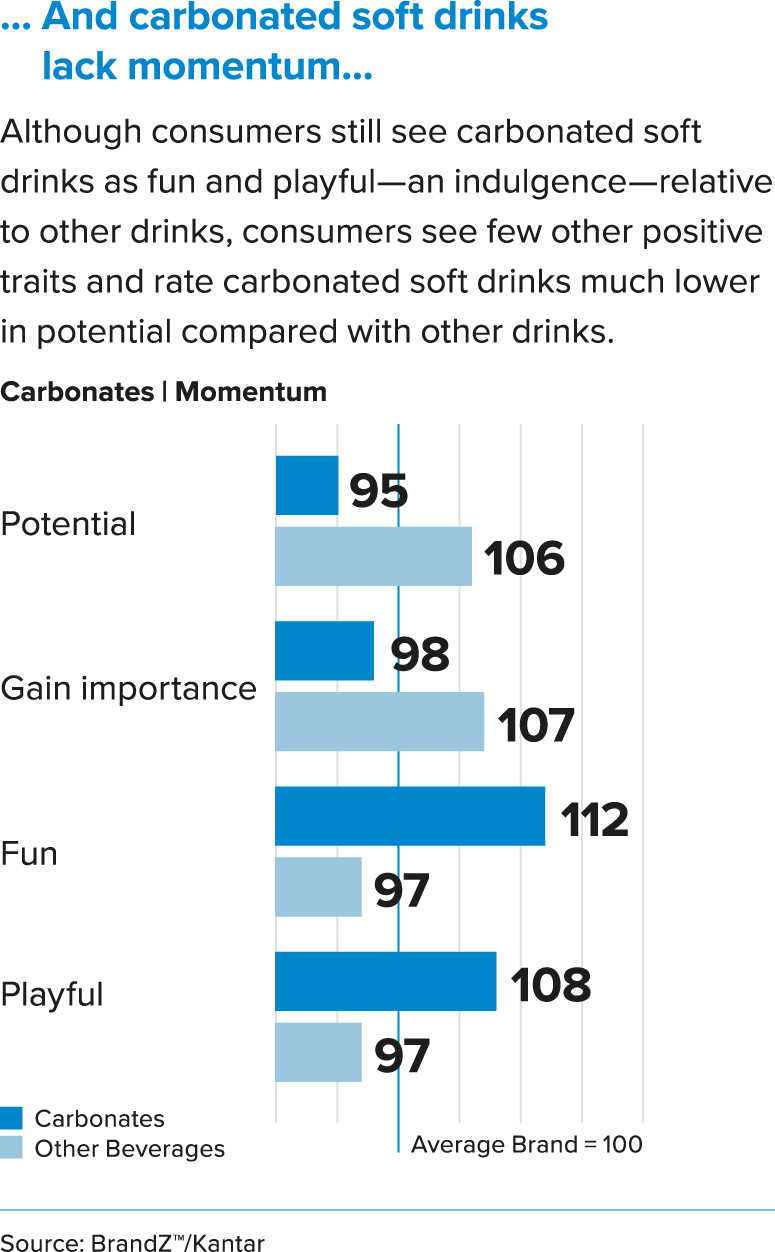