Global banks had a good year—finally—almost a decade after the global financial meltdown. But the banks anticipated more disruption and uncertainties with rising interest rates and regulatory changes in the US and Europe, competition from fintechs, and the threats and opportunities presented by blockchain. The BrandZ™ Global Banks Top 10 rose 24 percent in value following a 1 percent decline a year ago.

The upward trend reflected the strength of the global economy and indicated that banks have finally emerged from the restructuring and regulatory pressures—and fines—that followed the global financial crisis. The improved value growth also resulted from the brand-building efforts implemented by many banks to improve retail service and programs for high-wealth customers.

Banks struggled with several ongoing tensions, however, as they rationalized vast retail branch networks to engage with customers but lower the cost of engagement. Meanwhile, some customers—and not just young people—divided their banking relationships, maintaining loyalty to their preferred institution for functions such as savings and investment, but using apps or more niche brands to meet particular transaction needs, such as obtaining a car loan. 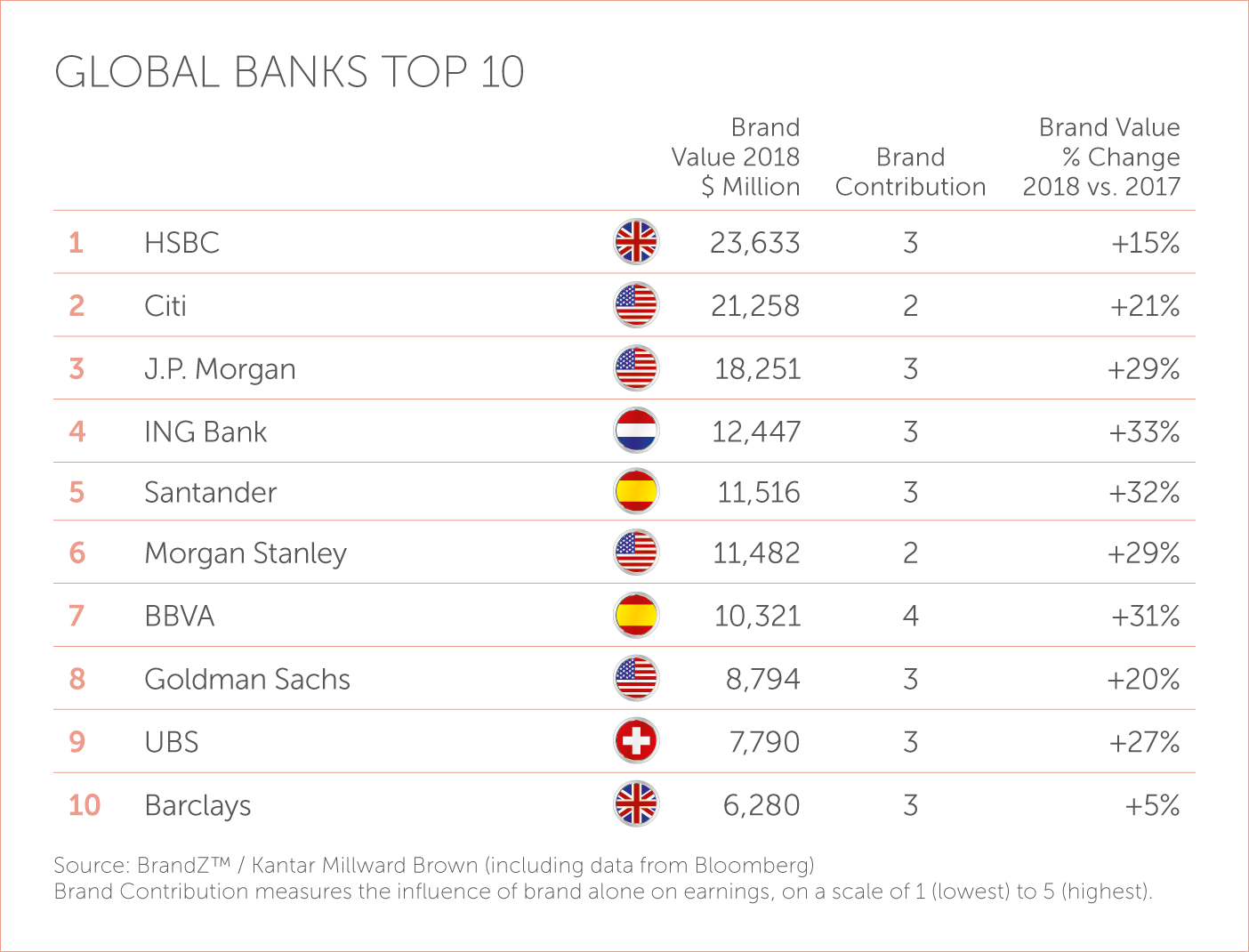 Motivated by the emergence of fintechs and prospect of competition from technology companies, like Google or Apple, global banks transitioned to new forms of digital banking, but more slowly than institutions in China, South Africa, and parts of the Middle East. The infrastructure legacy of global banks moderated their speed, as did a business model that typically derives more profit from high-wealth clients than from the retail customers served by digital banking.

New open banking regulations in the EU focused the banks’ attention, however. Until now, each bank kept its customers’ data on a proprietary basis. Under the changes, customers can consent to having their data shared. Although the impact of these changes is not entirely clear, they would enable a fintech, or a technology company, like Amazon, to access banking data and create relevant products. Similarly, with customer permission, a global bank could collect data from competing banks to create a one-stop financial dashboard.

In markets where open banking regulations have not been promulgated, the debate continues about whether the benefits of operating as an open platform, with full access to the customer’s financial data across other financial institutions, outweighs data privacy concerns. Separately, the US Congress debated relaxing Dodd-Frank regulations, implemented in 2010 to guard against another global financial crisis.

The interest in simplifying this regulatory maze is part of the reason that banks are studying blockchain as perhaps the best way to speed transactions, secure data, and reduce overhead. Blockchain would remove a lot of infrastructure expense from the banks, some of which use blockchain on a business-to-business basis to speed the transfer of funds among banks. The reduced cost could have a knock-on effect in reduced fees to retail customers.

Meanwhile, banks contended with the potential rise of interest rates and societal disruptions, at least in the industrialized world, where the life stages for which banks typically provided products—home ownership and car buying—are changing.

Banks attempted to appeal to the next generation of banking customers. But younger customers, adept at conducting financial transactions on mobile devices, are not focused on financial planning and less inclined than their parents to trust large institutions. These factors have enabled smaller disruptor brands, which are usually mobile-centric and lower cost, to move into this space. Examples include Robin Hood or Acorn.

Anticipating the open banking regulations, HSBC planned to launch an app called Connected Money, which was intended to collect in one place all the customer’s banking information across all financial institutions. In the UK, an app provides a dashboard of all accounts. The bank completed a turnaround initiated soon after the global financial crisis. It emerged somewhat smaller, but still present around the world.

BBVA introduced open banking in Spain, its home market, and planned to make it more broadly available to customers in other markets, including Latin America and the US. The bank has invested in developing its digital capabilities as a way to improve customer experience. Spain’s largest bank, Santander planned to introduce blockchain for international transfers in certain markets. Santander acquired a competitor, Banco Popular.

Dutch bank ING created an open banking app called Yolt that provides customers with all their financial data as well as budgeting and analytic features. The app is part of the bank’s effort to be nimbler. To appeal to the next generation of people with wealth to manage, UBS launched a platform called Unlimited, and an online magazine about society, and wealthy, published with several partners, including Vanity Fair magazine.

Citi enhanced its mobile app to offer a complete range of banking and investment functions. The feature also enables users to view their accounts at other banks. Citi has been closing branches since soon after the financial crisis. The app is part of the bank’s plan to regrow in the US, but with a virtual rather than physical presence. Branching out from its investment bank and trading heritage, Goldman Sachs pursued a similar strategy, developing a consumer online lending business called Marcus, in part to balance the decline trading revenue that followed the global financial crisis.

To reach the next generation of investors, who are acquiring—or inheriting—wealth, Morgan Stanley introduced a robo advisory service. Algorithms manage the portfolios, but human bankers choose the investments. Morgan Stanley also joined the money transfer network Zelle, as did other banks, including JP Morgan, which operates a mobile payment app called Chase Pay.

Barclays moved early into uncharted territory most banks are examining when it partnered with cryptocurrency operator Coinbase. Meanwhile, Barclays continued to strengthen its business, although it was fined for infractions from 2008.