BCA (Bank Central Asia) is Indonesia’s most valuable brand, a title it has held every year since the launch of the BrandZ Indonesian Top 50 ranking in 2015. The brand’s value rose 20 percent this year, making BCA not just the most valuable brand but also one of the country’s Top 50 fastest-growing brands. BCA is now worth US$12,674 million, which means it accounts for 15.7 percent of the value of the entire Top 50. Again, this is an increase over 2017, when it contributed 14.7 percent of the ranking’s total value.

Launched in Jakarta 61 years ago, BCA has grown to be a truly national brand, with more than 1,200 branches and 17,000 ATMs, plus extensive online banking and customer service options. It also plays a strong role in the country’s development, providing loans for key construction projects, including the Jabodetabek Light Rail Transit (LRT) network.

BCA’s growth in brand value in the past year has propelled it not just to the top of the Indonesian Top 50, but also into the prestigious BrandZ Top 100 Most Valuable Global brands ranking. This achievement – a first for any Indonesian brand – sends a powerful message to the world about Indonesia’s role on the world stage. BCA enters the Global Top 100 in 99th place, just behind Ford, Honda and Pepsi. 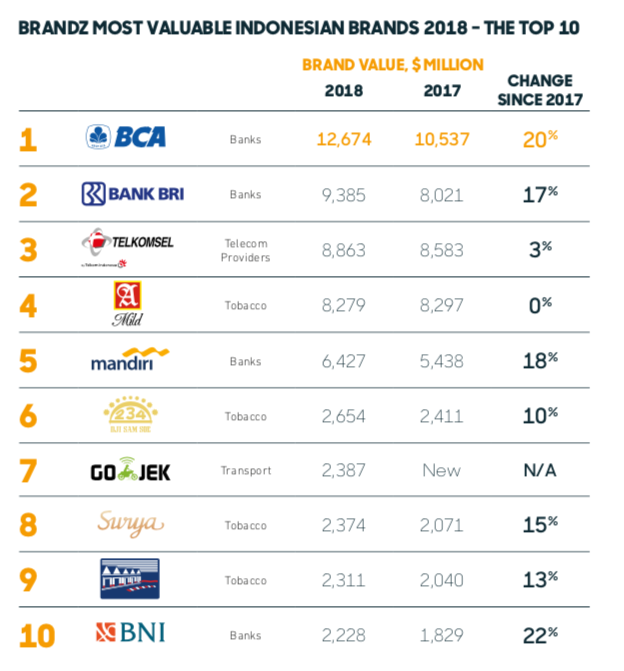 All of the brands at the top of the 2018 ranking have grown or at least maintained their brand value over the past year. The Top 10 now have a combined value of US$57,583 million. This means that the Top 10 brands between them account for 71 percent of the value of the whole ranking. Such a concentration of value at the top of the ranking is to be expected, and is a phenomenon seen in previous years in Indonesia as well as in BrandZ rankings in other markets.

BrandZ valuations are unique in that they take into account not just the financial might of a brand, but also quantify the role that it occupies in consumers’ minds – and their hearts. This methodology enables smaller brands to, in effect, punch above their weight in the Top 50 ranking.

The measure we call “brand contribution”, scored between one and five, indicates the proportion of brand value driven by the strength of its brand equity according to consumers, and is based on extensive face-to-face research with the public – the very people who consider and buy these brands every day.

Two brands with similar financial scale can therefore find themselves in quite different positions in the ranking, thanks to differing strength of scores on brand equity. And financially smaller brands can establish a place in the rankings flanked by much larger, financially stronger brands, boosted by their brand equity contribution score – the esteem in which they’re held by consumers.

But brand equity isn’t just a way to supercharge a brand’s performance in the BrandZ rankings; given that the score reflects how well a brand differentiates itself from its competitors, generates desire, and cultivates loyalty, brand equity helps insulate a brand against decline when times are tough. A brand with a strong brand equity score predisposes consumers to choose it over others in the category, or makes people more willing to pay a premium for it. In challenging times, strong brands tend to be more resistant to a downturn and, when market conditions pick up, they recover faster than the competition.

Six of the Top 10 brands in the 2018 ranking have high brand contribution scores – that is a score of four or five out of five. A higher score indicates that a higher proportion of a brand’s value comes from brand equity rather than financial scale. The Indonesian brands with the best performance on this measure are not those at the top of the ranking – the biggest brands. Rather, they tend to be the brands that consumers reach for every day, knowing – because over many years they’ve tested them time and again – that they deliver something special and reliable. In fact, the only three brands in the Top 50 to achieve the maximum score of five out of five produce inexpensive products in categories that few consumers would spend much time thinking about. These brands – SariWangi, Indomie and Rinso – have simply become the only choice for many Indonesian shoppers.

One of the ways to boost the brand equity element of a brand’s valuation – and, in turn, to grow brand value, is to nurture its meaningful difference.

Meaningful difference is a BrandZ metric and it comprises two elements that work together. It reflects how different a brand is to others in its category. Just as important, though, is that this difference is relevant both to the brand itself – and makes an emotional connection with the consumer.

The BrandZ ranking over time provides strong evidence that investment in brand, and in particular attention to being meaningfully different, makes a significant difference to brand value.

There are 38 brands that featured in the inaugural Indonesian Top 50 ranking, launched in 2015, and which are still present this year. When these brands’ change in brand value is tracked, and linked to their performance on meaningful difference, the power of this “X factor” becomes clear.

The average meaningful difference score of all brands is 100. We consider a brand to have a high score if it achieves 130 or above; a low score is 95 or less, and a medium score is anywhere in between.

Brands that have won a place in the Top 50 since the first ranking in 2015 have a significantly higher average score for meaningful difference than those that have dropped out. Newcomers have a mean score of 125, while the average of brands to leave the ranking is just 96. Brands that feature both in 2015 and 2018 have an average score of 124.

The brands with high meaningful difference scores have grown in value at more than double the rate of the average brand in this group, while those with low scores declined in value, even though they are among the country’s most valuable brands.

Surya is a brand of cigarette that this year celebrates 60 years in the Indonesian market. This is a country with a high proportion of smokers, and competition for their loyalty is intense. Surya creates meaningful difference by focusing on the male market with a message and communications strategy that has evolved to match the interests of men over the decades. It has a long association with motorcycling, and holds a range of events under the “Suryanation” banner. This year, video ads show a boxer working through a rigorous training regimen to get himself fighting fit, and urge men never to give up. Surya ranks eighth in the 2018 Top 50, valued at US$2,374 million, 15 percent higher than a year ago.

Progress, stability a magnet for investment and growth