Impacted by declining consumption and changing consumer attitudes and tastes, the beer brands introduced product innovations, such as beers with low or no alcohol, and new initiatives in marketing and distribution, including e-commerce and subscription-based ordering. In packaging and promotion, the brands emphasized sustainability.

Weakened economies in Latin America, where five of the BrandZ™ Beer Top 10 are based, compounded the challenge of energizing the category. Every beer in the Top 10 lost value, except for Guinness, which rose 4 percent, and Budwieser, which remained flat. Overall, the Beer Top 10 lost 6 percent in value, following a rise of 3 percent a year ago.

Choice was not a problem. After the merger with SAB Miller, AB InBev owns around 400 brands, including seven of the BrandZ™ Top 10. The other three brands in the Top 10, Heineken, Guinness, owned by Diageo, and Grupo Modelo also have brand portfolios. All the major brewers developed beers, and beer alternatives, to appeal to diverse pallets.

The newest drinkers, Centennials, tend to drink less and have other options, including marijuana, which is legal in parts of the US. They often seek a functional benefit and are mindful of the health impact of what they eat and drink. To meet these changing tastes, the major brewers developed beers that are craft, premium, or NABLAB (no- and low-alcohol beer).

Because concern for the environment is important to Centennials, and others, leading brands advanced sustainability initiatives, most notably ways to link cans into six-packs without using the ubiquitous plastic yoke. Many implemented conservation programs for their use of beer’s key ingredients, water and grains.

To respond to disruptive change, and to drive change with new initiatives, the major brewers operated specialized R&D entities, which include: ZXventures (ABI), Futures (Molson), and Distilled Ventures (Diageo). The focus is necessary, as consumers see the beer brands and much less innovative and creative than the BrandZ™ Top 100 overall.

However, recognizing the importance of innovation to revitalizing the category, marketing leadership at AB InBev is expected to shift in two years, with the new chief marketing officer coming from ZXventures, which develops new ideas, often related to specialty products, e-commerce distribution, and craft beer.

Craft presents a paradoxical challenge. Brand loyalty is ephemeral because craft drinkers are on a quest to try the next new drink, but growth in the number of craft drinkers makes the subcategory critical to the business, although the proliferation of craft beers in recent years has raised the prospect of “craft fatigue.”

The brewers are pushing category boundaries. ZXventures purchased Atom Group, a UK spirits company. AB InBev has also introduced a product and marketing association with Jim Beam Bourbon. Diageo, which has been primarily a liquor company, although it owns Guinness, is now emphasizing beer.

Meanwhile, brewers adjusted to lower alcohol consumption. A year after its introduction in the UK, sales for Prohibition, Budweiser’s non-alcohol beer, continued to grow. Peroni introduced a non-alcohol variant in the UK. Michelob Ultra is particularly popular with young people looking for a beer with lower alcohol content and calories.

Michelob Ultra is positioned as a guilt-free alternative to a high-caloric beer after sports. AB InBev added it to its portfolio of global brands, which also includes Stella Artois, Budweiser, and Corona.

Heineken is marketing Heineken 0.0, an alcohol-free, low-calorie alterative that expands drinking occasions for a beverage with a Heineken beer taste.

Guinness did more with occasions and its association with rugby. It presented a more contemporary, progressive male image. It strengthened the perception among consumers that it is a distinctive beer with a personality that is brave, rebellious, and adventurous, according to BrandZ™ research.

Skol revised its marketing to present a more progressive male image in Brazil, its home market. The beer eliminated ads that objectify women, it celebrated racial diversity with beer cans in many shades of skin color, and it formed partnerships to advocate for the LBGTQ community.

Peroni operated restaurants to reinforce its positioning as a premium Italian beer. In some places it required beer to be served in a Peroni-branded glass. Stella Artois continued to use its chalice to enhance the drinking experience. To offer an out-of-home experience, Molson Coors has opened restaurants, as has Goose Island, an AB InBev brand.

For greater exposure in bars, restaurants, retail locations, and at home, Heineken introduced Heineken Blade, a countertop draught dispenser, around the size of an espresso machine. In addition, AB InBev collaborated with Keurig Dr Pepper to create a home bar option for people to easily make beer, cider, and cocktails.

With the decline in volume, brands sought premiumization opportunities. Positioned in China as a premium beer, Budweiser offered specially designed bottles for the Lunar New Year and other major holidays. In partnership with Alibaba, Budweiser developed programs for the Single’s Day shopping event.

Many brands are positioning beers to pair with meals as an alternative to wine. ABI Leffe, a Belgium beer is positioned as an aperitif. Cobra, a Molson Coors brand traditionally linked with Indian Food, is being positioned as a beer to accompany a wider menu of food options.

As the shelves, crowded with beer brands, start to resemble wine retailing, the brewers adapted some marketing tactics from the wine category. They expanded their e-commerce presence and introduced subscription programs. These programs provide a direct-to-consumer link that enables brands to develop social commerce, build communities around their brands, and obtain data to better understand customer taste profiles.

AB InBev’s ZXventures completed its acquisition of RateBeer, an online rating site. It is possible to purchase most beers on RateBeer by clicking through to a beer online shop called Beer Hawk, which is also owned by AB InBev. Heineken owns a similar operation called Beerwulf. The rating system introduces an element of social commerce to the beer purchase decision. Subscriptions are another growing aspect of beer e-commerce. Expanding in the US and other markets, particularly for ordering craft beers, the subscription channel is most advanced in China.

Also in China, AB InBev, with insights gained from Alibaba, introduced craft beers brewed specifically with tastes to please Chinese drinkers. Ultimately, the strength of Budweiser in China may be its success in building its own community while partnering with powerful Chinese technology ecosystems, including Tencent and Meituan, along with Alibaba.

Still, beer in much of the world is purchased at physical stores, where distributors are struggling to maximize their profits while accommodating the expanded choice offered by major brewers. The brewers are working to make the choice less confusing by introducing a logical organizing system on shelves that have become crowded with options since the rise of craft. How shelves will be organized—by style of beer or drinking occasion, for example— is less clear.

It is no secret that craft beer and spiked seltzer are hot. The questions are: what is the next big trend; and how can brands get in front of it? It is important to identify the big risks and disruptive innovations.

People today feel disconnected. Beer has always been about bringing people together. How do the beer brands continue to bring people together in a world where connection is a strong need? Solving that challenge may yield greater strategic advantage than inventing the next flavor variant.

Conserving resources and avoiding damage to the environment are the right things to do. Increasingly, they are prerequisites for appealing to the newest drinkers for whom responsibility and authenticity are necessary for consideration.

Many of the brands of lager beers are not distinctly differentiated. In other categories, like gin, for example, brands have done a better job describing ingredients and how the produce a distinctive taste and experience. Many brands have long histories and real, tangible reasons why they are distinctive. Stories are waiting to be told, and not just by craft beers.

With so much choice, it is important to help guide the consumer from confusion to confidence about the purchasing decision. That entails adding logic to the organization of retail shelves, possibly explaining how a beer fits with various occasions. Online brands can engage in the conversations with consumers rating and commenting about beers. 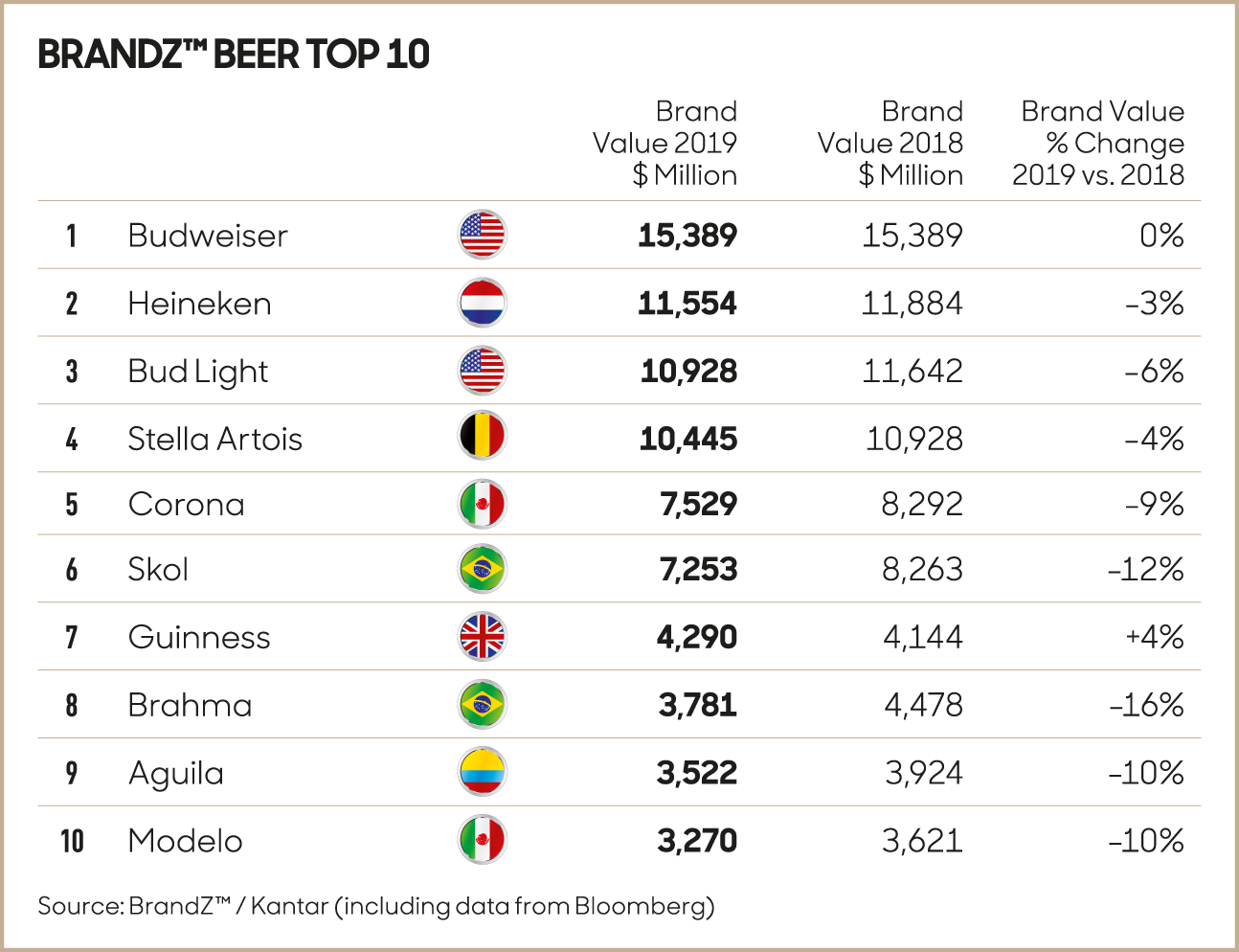 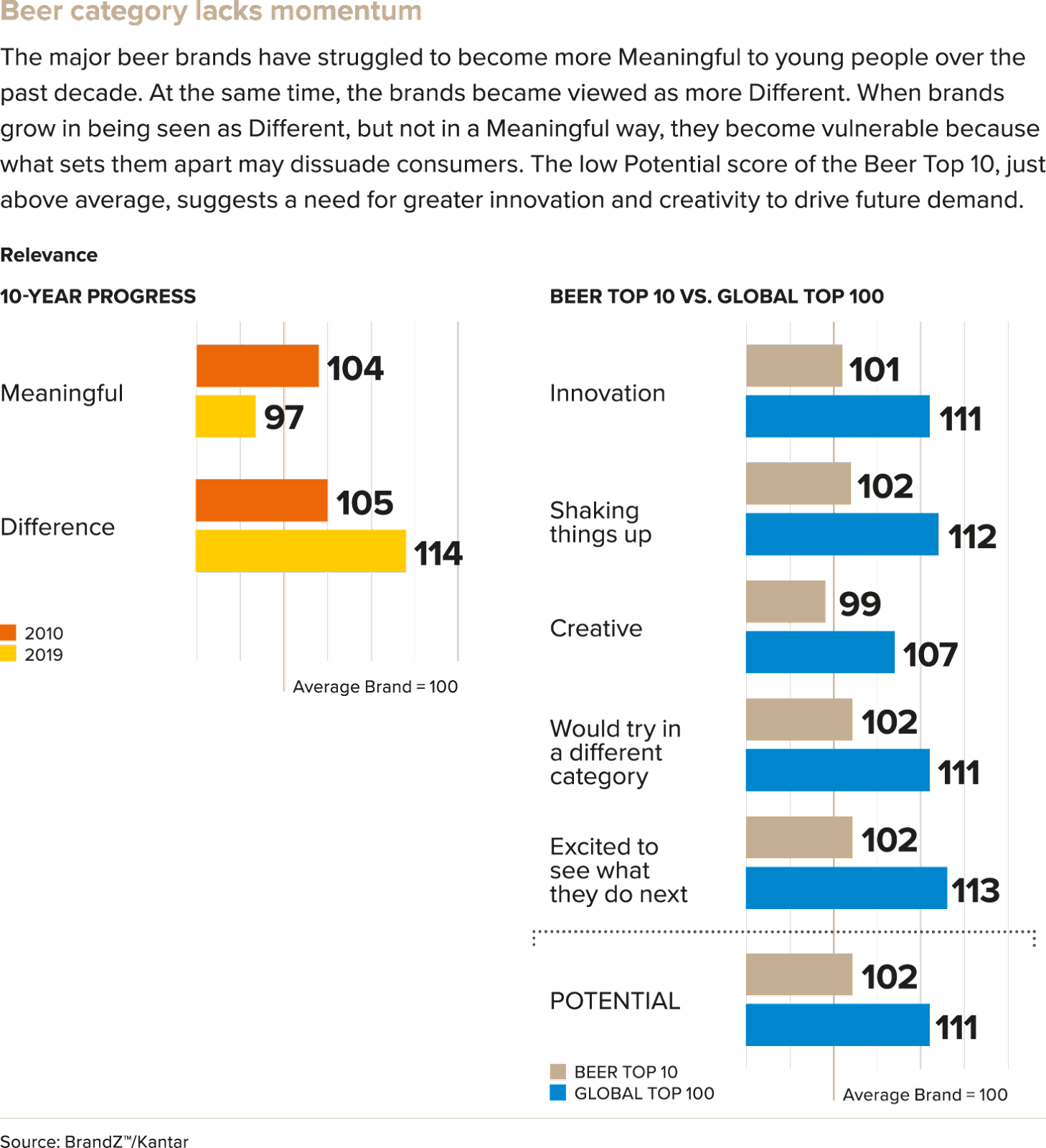 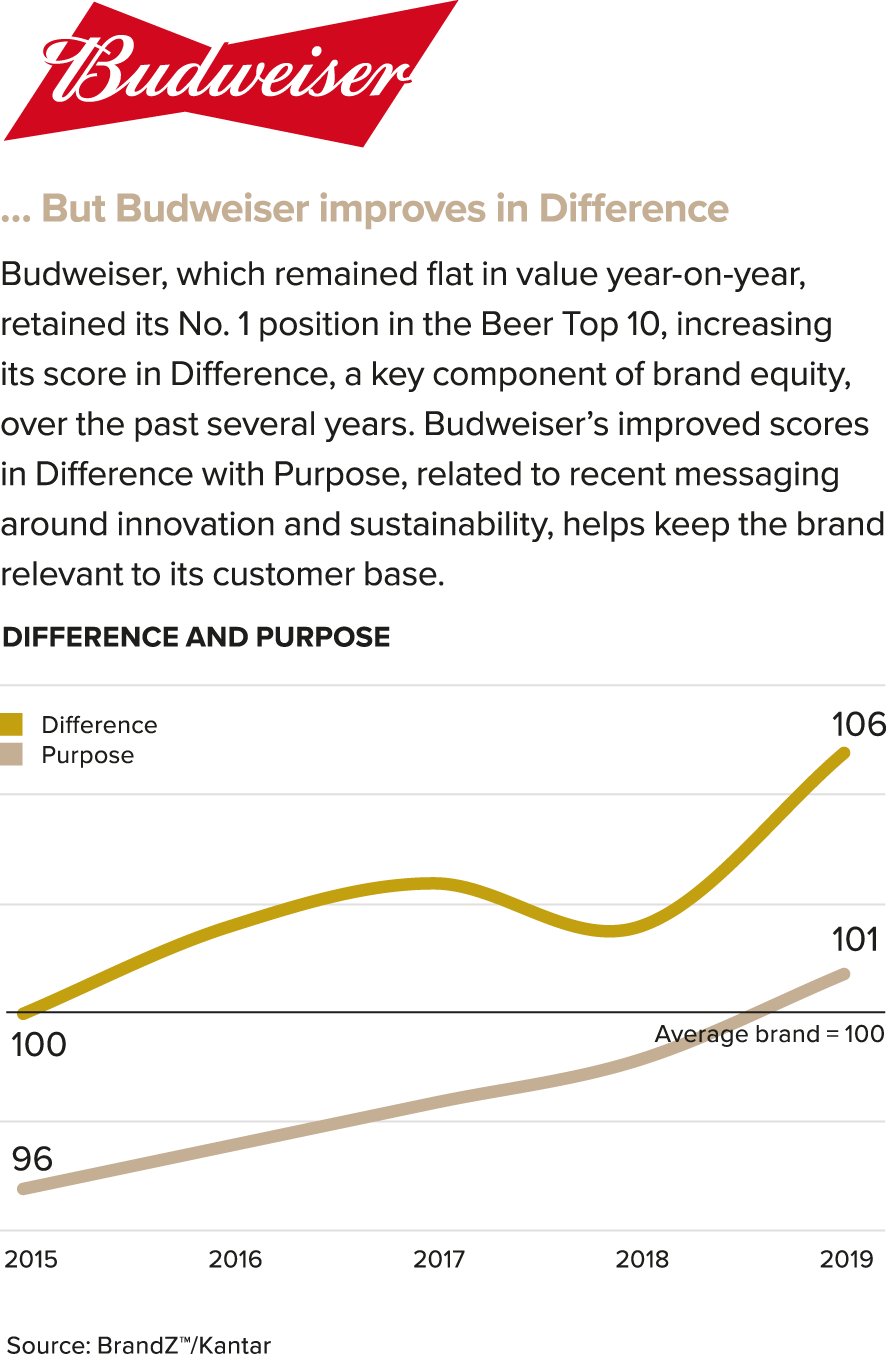