The innovations also reflect the need to meet challenges from agile upstarts, although even craft beers experienced leveling consumption and experimented with spiked seltzers. Betting big on transparency, Carlsburg, a Danish beer with a lengthy heritage, introduced a reformulation of its beer in the UK with a campaign that retweeted its customers’ criticisms of the original formulation. 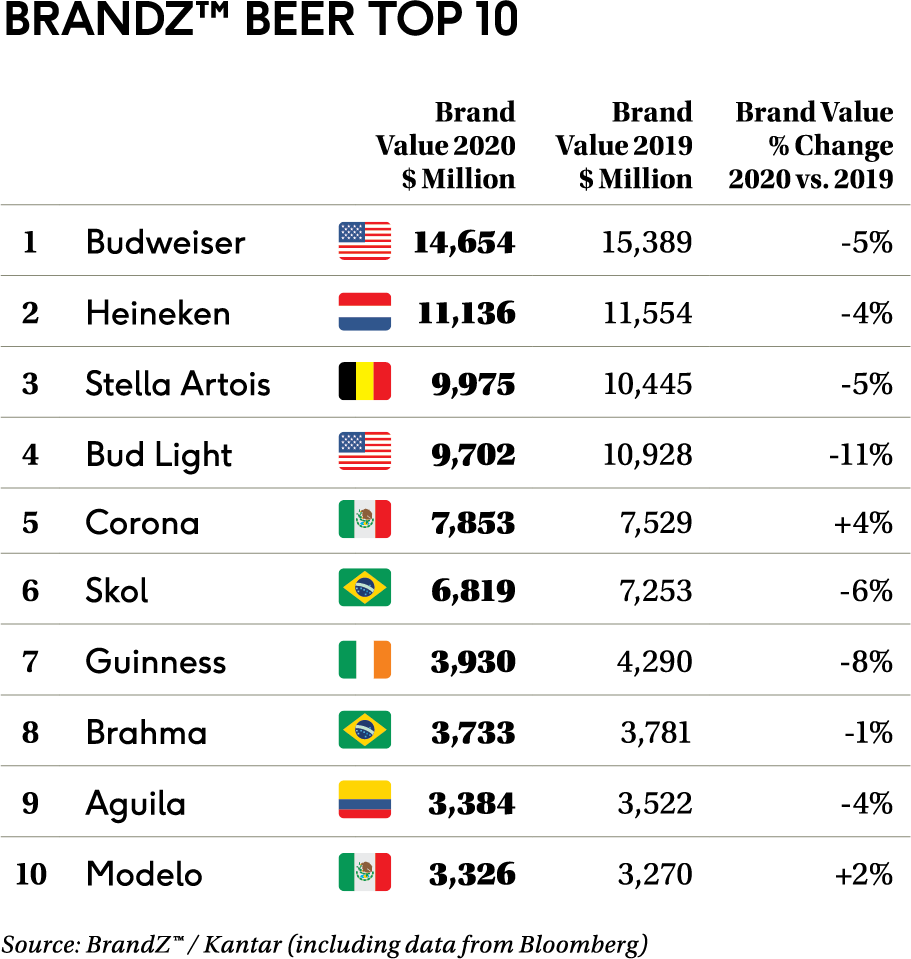 At the same time, the major brands continued to introduce low- and no-alcohol beers. Budweiser launched Budweiser Zero. Having introduced Heineken 0.0 to many of its global markets, Heineken NV launched its alcohol-free beer in the US. Similarly, Molson Coors introduced Coors Edge in the US.

Efforts to control spread of Covid-19 disrupted many of these initiatives. E-commerce and at-home drinking did not compensate for the elimination of social occasions, the cancellation of sporting events, and closure of bars and restaurants. The beer category declined 4 percent in value, after a 6 percent decline a year ago.

In an effort to drive consumption and fit more occasions, major beer brands introduced spike seltzers, sparkling flavored drinks similar to La Croix, but with alcohol. Spiked seltzer leaders in the US are White Claw and Truly, which is owned by the company that makes Sam Adams beer, a leading craft brand.

In addition, AB In Bev purchased Cutwater Spirits, which makes ready-to-drink cocktails, and Babe Wine, a sparkling wine in a can. Molson Coors introduced Movo Wine Spritzers in the US. It introduced Vizzy Hard Selzer but, unlike AB InBev and Constellation Brands, Molson Coors did not rely on the power of the master brand.

Connecting with the health and wellness trend, Molson Coors is also marketing Clearly Kombucha, a California-based drink it acquired a couple of years ago and reformulated and rebranded to compete with other mass market beverages. In addition, Molson Coors tested La Colombe Hard Cold Brew Coffee in several fruit flavors.

Creating an experience that identifies and differentiates the brand continued to be an important aspect of beer marketing. In certain markets, Peroni tried to create a more holistic experience with elaborate pop-up venues, often with food and music, where the beer is served in a Peroni glass.

Stella Artois relied on its glass chalice to premiumize the brand. In the UK, Carling introduced a pub innovation—branded glasses that interlocked, making it possible for one person to wrap two hands around four pint-glasses of beer and carry them with relative ease from the bar to the table.

Premiumization was a factor in one of the year’s larger acquisitions when Japan’s Asahi Group bought Fuller Brewery, adding brands like London Pride to its portfolio of premium brands in the UK, which also include Asahi and Peroni.

Many of the beer brands increased their marketing spending, focusing on social media or TV to reach a younger audience during a drinking occasion. Miller Lite ran a campaign incentivizing people to unfollow the brand on social media and instead to actually socialize with friends.

Attempts to control Covid-19 immediately eliminated key beer-drinking occasions with canceled sporting events and closed bars and restaurants. South Africa prohibited the sale of all alcohol. The timing of these measures varied by country, staggering the impact on global brands ranked in the BrandZ™ Beer Top 10—Budweiser, Heineken, Stella Artois, Corona, and Guinness. Beer brands also faced the expensive secondary problem of responsibly disposing an ocean of stale beer. Bud Light, which has been losing share in the US, its major market, was especially impacted by the virus-related decline in spending. In an attempt to help customers cope with the pandemic, Budweiser introduced an ad featuring people checking up on each other online and socializing with a Bud. Reprising the term “Whassup” from Budweiser ads of two decades ago, the add ends with the message, “Checking in, that’s whassup,” and the phone number for a Salvation Army hotline. 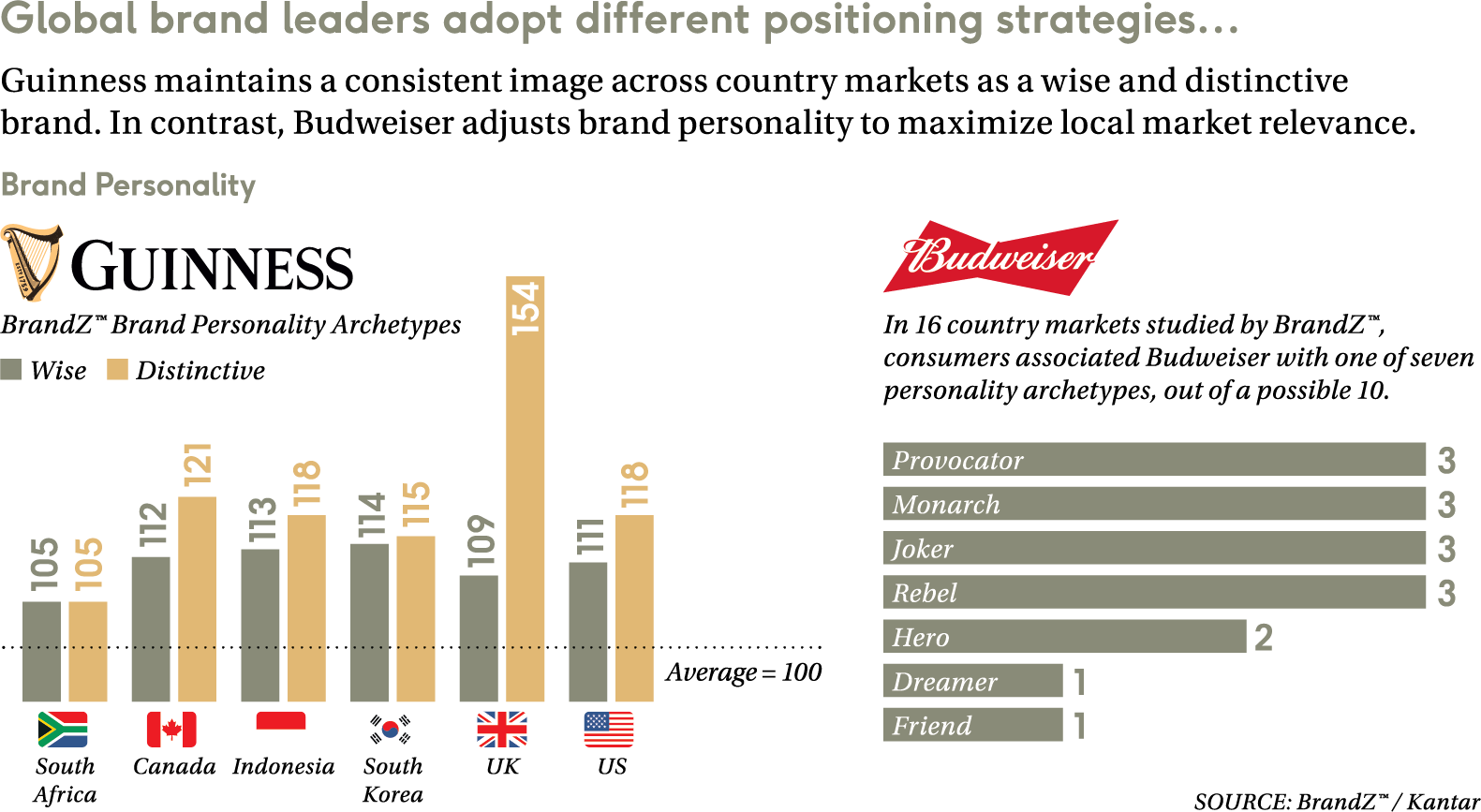 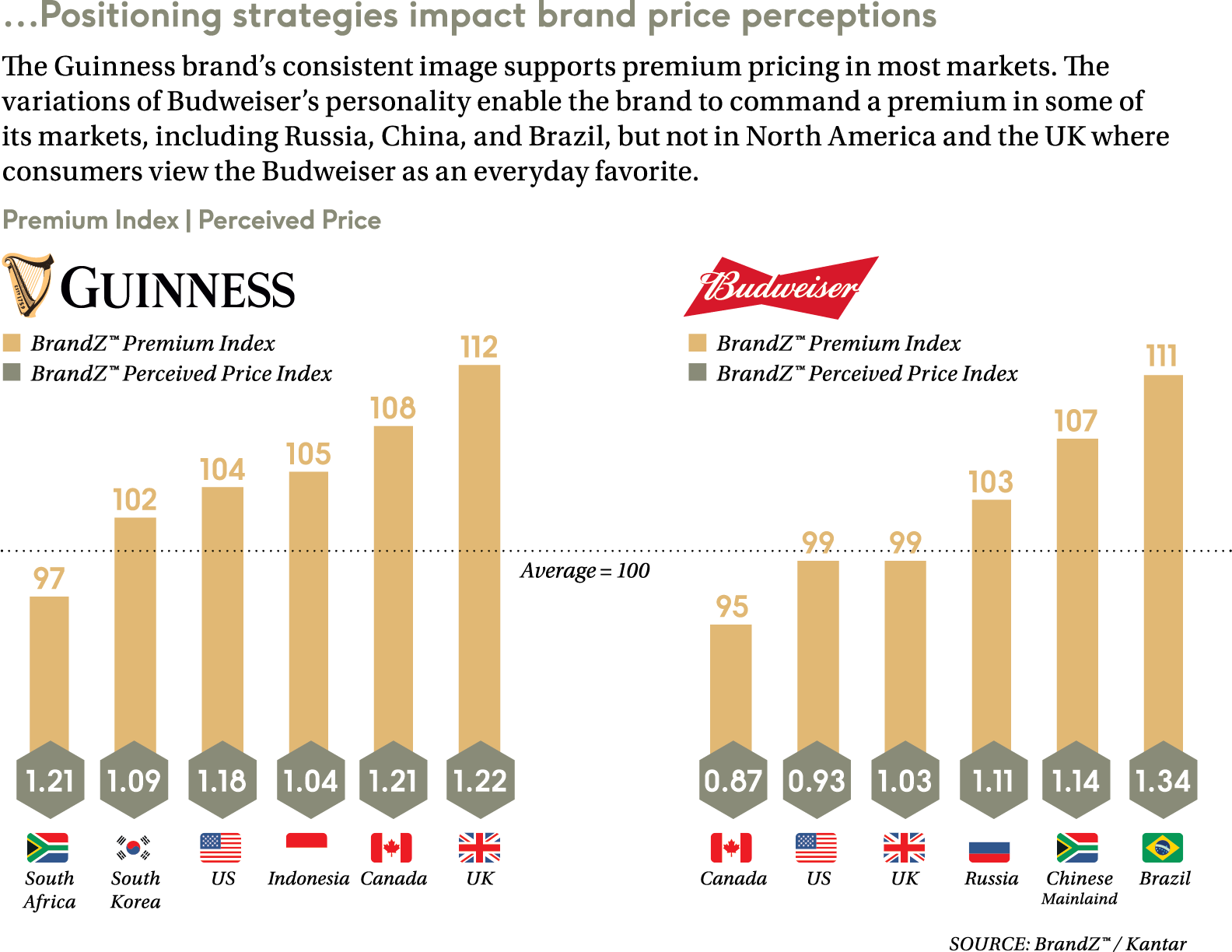 Repertoires are increasing. People are trying more options. Understand what the consumer basket looks like. There may be people trying your brand whom you may not have expected. Encourage curiosity.

Especially with more drinking at home, people may try something new or want to offer something new when entertaining. Encourage experimentation.

People are looking for beverages that help them relax or recharge. Sometimes they may choose a beer, sometimes not. New opportunities will come from outside the mainstream beer category. Identifying new opportunities requires vision, especially peripheral vision.

Brands from other categories—spirits, for example—are courting the same young consumer willing to try a variety of drinks and possibly pay a premium for the right experience.

Ingredients are particularly important today, when people are concerned about health and wellness. An ingredient story can be a positive selling point, rather than a defensive response.

Create an experience that makes people feel as if the brand was a memorable part of their day and worth a return visit.