Best Countries: Qualities of countries shape perception of their brands

The Global Top 100 brands come from 15 countries. The most represented countries are the US, with 55 brands, China with 14, Germany 8, France 4, and the UK 4. Some brands appear only in the category rankings because their value falls below the value threshold of the Top 100. With these brands added, the Global 100 report includes 191 brands from 24 countries. The number of brands from each country then increases, sometimes substantially. For example, the number of US brands rises from 55 to 89, and the number of German brands rises from 8 to 14.

Meanwhile, both the BrandZ™  Global Top 100 and category rankings are becoming more diverse. The number of Chinese brands rapidly increased from 1 in 2006 to 14 today. India and Indonesia are now represented by one brand apiece in the Global Top 100. The first Indonesian brand, BCA bank appeared in the 2018, and an Indian brand, Maruti Suzuki, appeared in the BrandZ™  Car Top 10 for the first time.

These developments—the dominance of the US, the sustained strength of the UK and European countries, the rapid rise of China, and the emergence of Indonesia and India indicate that strong, valuable brands can come from just about any geography or culture. Understanding what country characteristics most correlate with high-value brands, and how those characteristics vary by country, can yield insight into the future of building valuable brands. 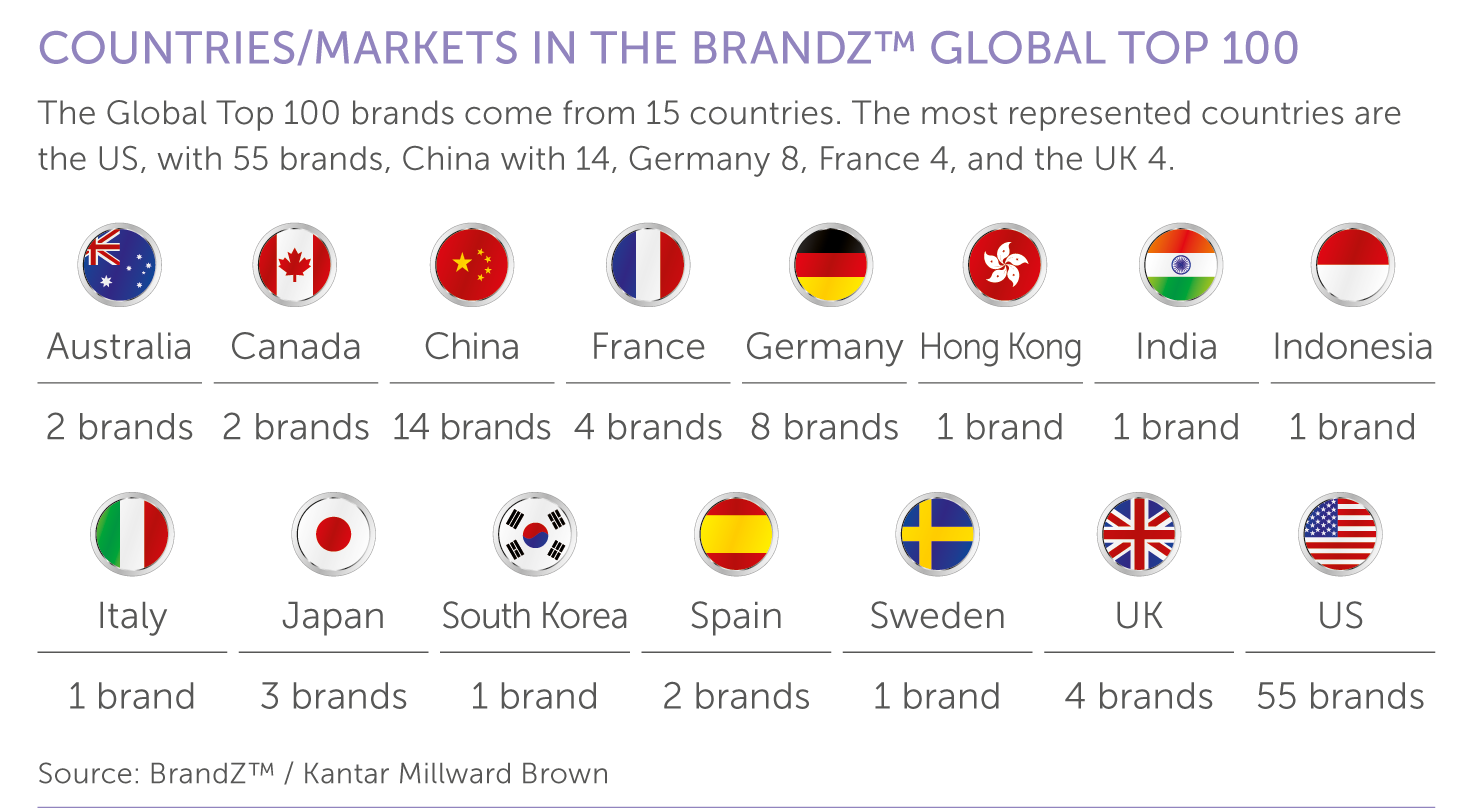 Two qualities seem to most distinguish the countries whose brands appear in the BrandZ™  Top 100 Most Valuable Global Brands—the countries are powerful, and they are entrepreneurial. These results emerge from analyzing the results of the Best Countries 2018 study by Y&R’s BAV Group, completed in collaboration with US News & World Report and Wharton business school.

The study is based on interviews with 21,400 elites, business decision makers, and citizens from 36 markets rating 80 countries across 65 brand attributes. The attributes are then grouped into these nine, thematic subrankings: Adventure, Citizenship, Cultural Influence, Entrepreneurship, Heritage, Movers, Open for Business, Power, and Quality of Life. The study ranks countries on each attribute and subcategory and also combines the data to produce a Best Countries Overall ranking. (Please see Methodology).

There is a correlation between how positively people worldwide view a country, and the extent to which the country produces high-value brands. Four of the five countries with the most brands in the BrandZ™  Global Top 100 also rank in the BAV Best Countries Overall Top 10. Germany is No. 3 in the Best Countries Overall, the UK is No. 4, the US is No. 8, and France is No. 9.  China and India rank No. 20 and No. 25, respectively, in Best Countries Overall. Fast-growing Indonesia ranks 41.

Other than Indonesia, these countries share in common especially high ranks in two of the eight Best Countries subrankings: Power and Entrepreneurship. Ranking in the Power Top 10 are: the US at No. 1, China No. 3, Germany No. 4, the UK No. 5, and France No. 6. India ranks No. 15 and Indonesia ranks 47. These countries rank in the Entrepreneurship Top 10: Germany is No. 1, the US No. 3, and the UK No. 4.  In the next tier, France ranks No. 14 and China ranks No. 16. India and Indonesia follow at No. 28 and No. 43, respectively.

The Power and Entrepreneurship ranks are a composite score calculated from scores on component attributes. The Power attributes include: having a strong military, strong international alliances, and being politically and economically influential, for example. Among the attributes comprising Entrepreneurship are: being entrepreneurial, providing easy access to capital, having a well-developed infrastructure, and transparent business practices.

The extent to which each attribute contributes to the subranking score varies by country. China’s No. 3 in Power is based on a combination of having a strong military and political influence. For the UK, its No. 5 rank in Power comes from strong international alliances and economic influence. Germany’s No. 1 rank in Entrepreneurship is driven by its skilled labor force and well-developed infrastructure. For the US, No. 3 in Entrepreneurship, the key attribute is being connected to the rest of the world. 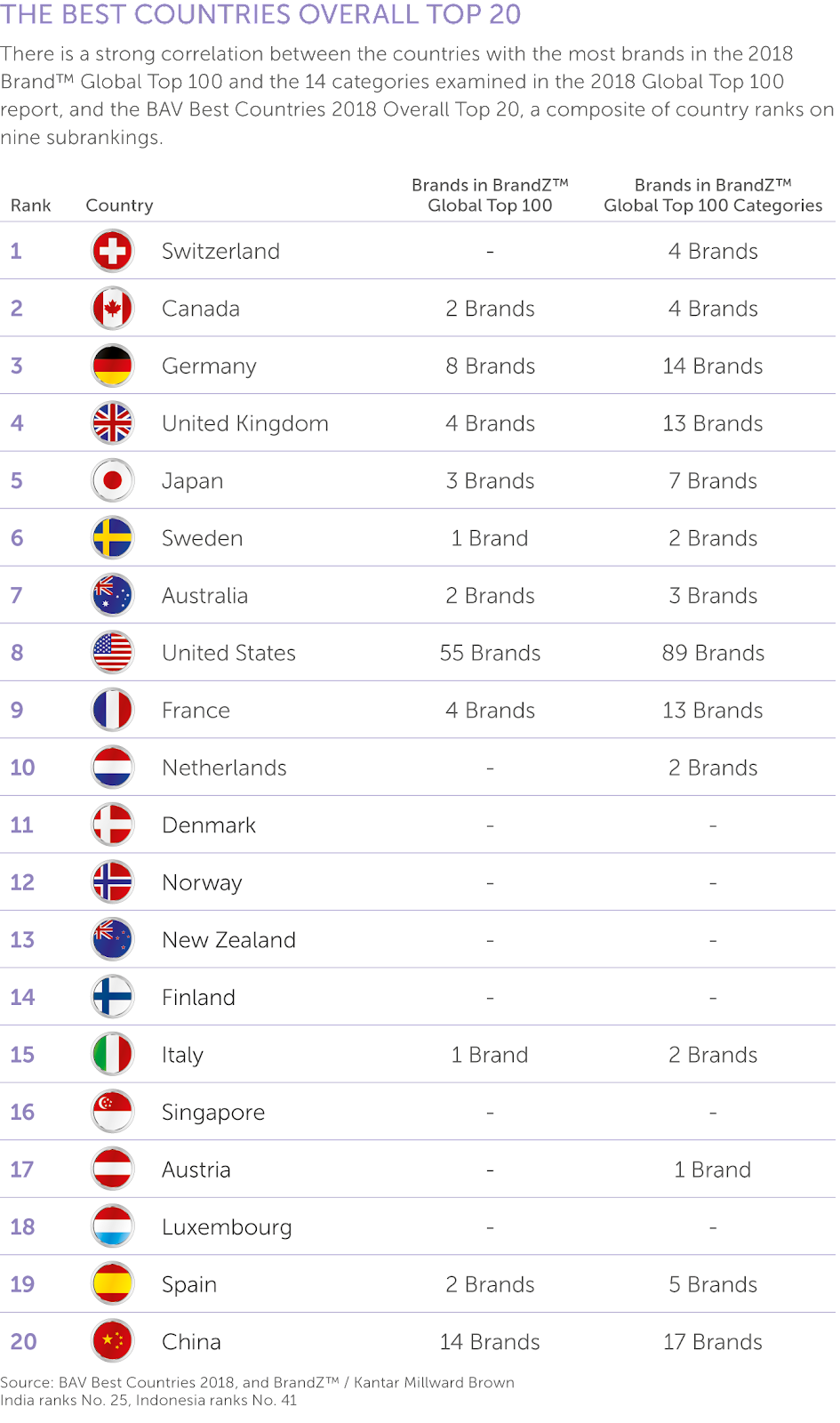 Along with Power and Entrepreneurship, the countries with the most brands in the BrandZ™  Global Top 100 also excel in other Best Countries subranking, including: Citizenship, Cultural Influence, and Heritage.

Citizenship Attributes comprising the Citizenship subrankings include: respect for property rights, gender equality, caring about human rights, and religious freedom. Of the countries that have had brands consistently ranked in the Global Top 100 over time—The US, UK, Germany, and France—Germany ranks the highest, No. 10, and all the countries rank in the Citizenship Top 20, much higher than countries whose brands have entered the BrandZ™  Top 100 more recently.

Cultural Influence Attributes comprising the Cultural Influence subranking include: being seen as prestigious, being culturally significant in entertainment, and being modern, fashionable, or trendy. France, the US, and UK rank in the Top 5 in Cultural Influence, which may reflect their influence on the world in the second half of the twentieth century, post-World War II. The rise of their global brands benefited from that influence.

Heritage Attributes comprising the Heritage subranking include: having a rich history, many cultural attractions, and great food. Heritage is also a strong factor for France at No. 4, India No. 6, China No. 10, and the UK No. 11. But heritage can cut both ways. Heritage can shine a halo of artistry around France’s fashion and luxury brands. Heritage can also lead to stereotypes that inhibit brand growth. India is known overseas for its Ayurvedic products and China for its traditional Chinese medicines. Both categories are heritage-related; neither reflects the broader, dynamic economies and aspirations of these countries.

COUNTRIES WITH THE MOST BRANDS IN THE GLOBAL TOP Rank 100 ARE POWERFUL...

Countries with the most brands in the Brand™ Global Top 100 comprise  five of the BAV Best Countries Power Top 10. India is No. 15. 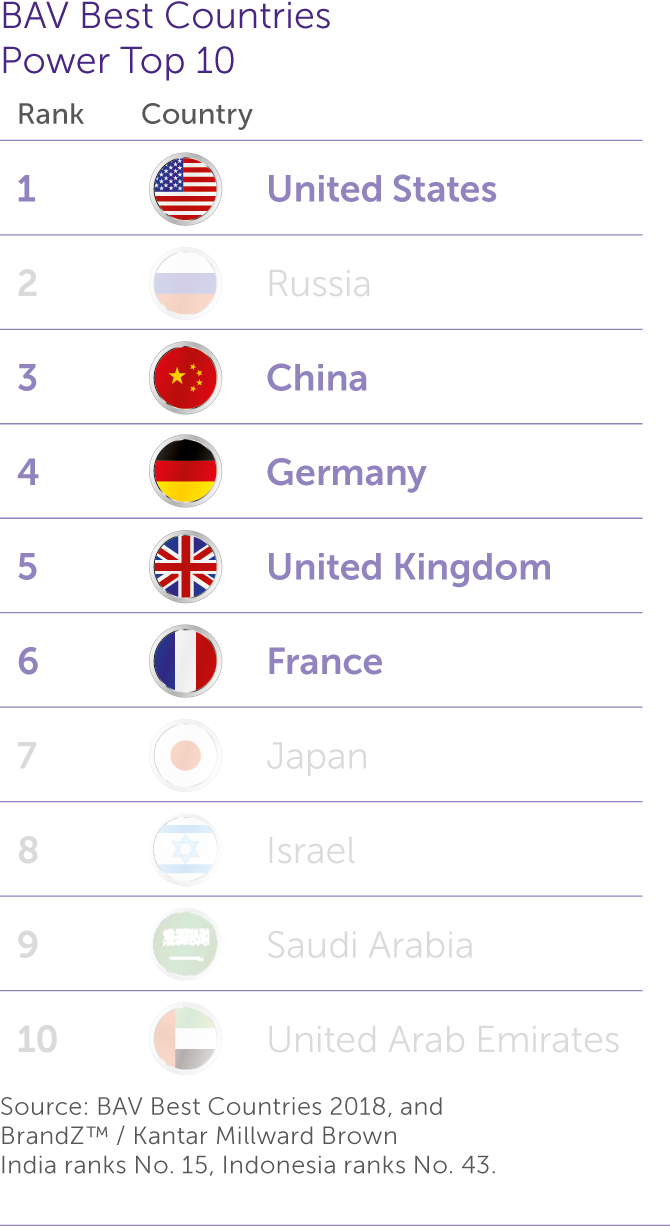 ...AND COUNTRIES WITH THE MOST BRANDS IN THE GLOBAL TOP 100 ARE ENTREPRENEURIAL 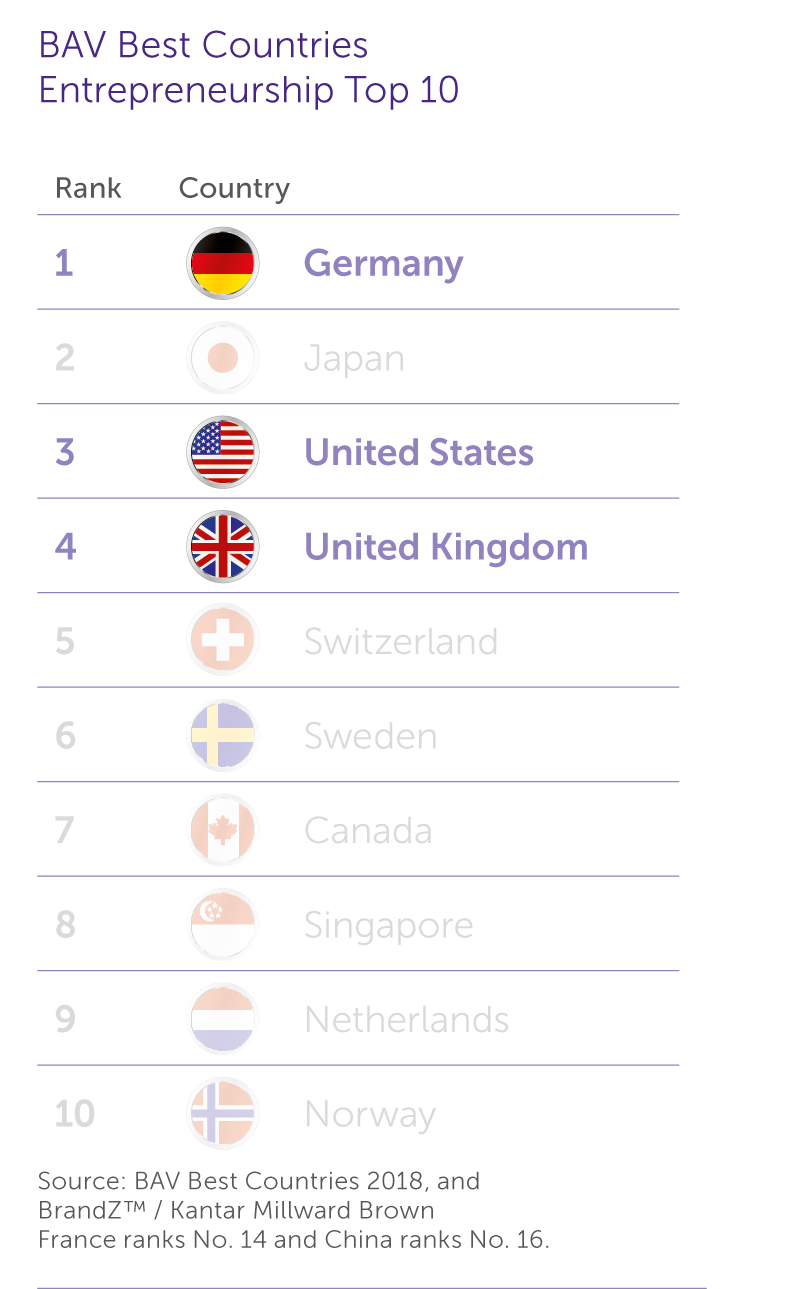 Four of the countries that have the most brands in the BrandTM Global Top 100 consistently over time rank in the BAV Best Countries Citizenship Top 20, although only Germany ranks in the Top 10.

Three of the countries that have and the

most brands in the BrandTM Global Top 100 8 consistently over time rank in the BAV Best Countries Cultural Influence Top 5.

Three of the countries that have and the most brands in the Brand™ Global Top 100 8 consistently over time rank in the BAV Best Countries Cultural Influence Top 5. 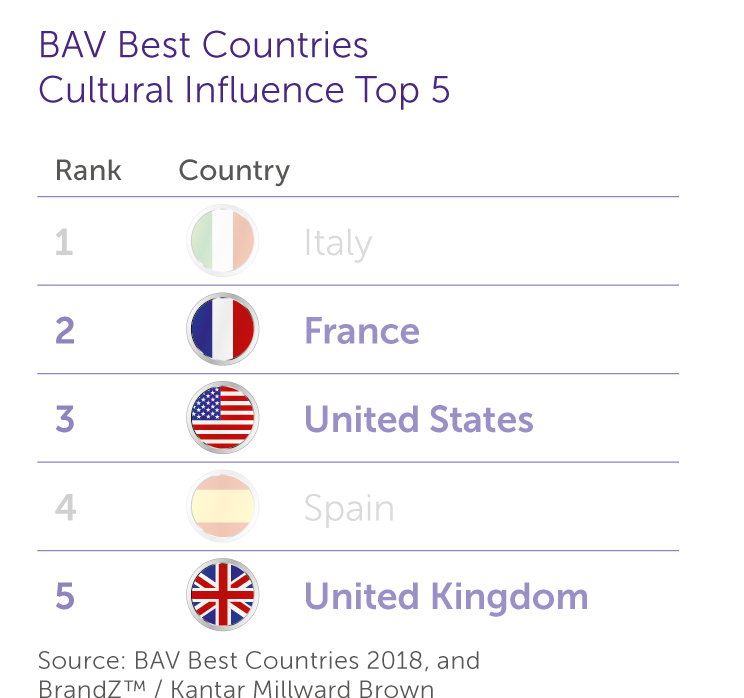 Countries in the BAV Best Countries Heritage Top 10 include France, which has consistently had many brands included in the Brand™ Global Top 100, along with India and China, with brands added to the Brand™ Top 100 more recently. 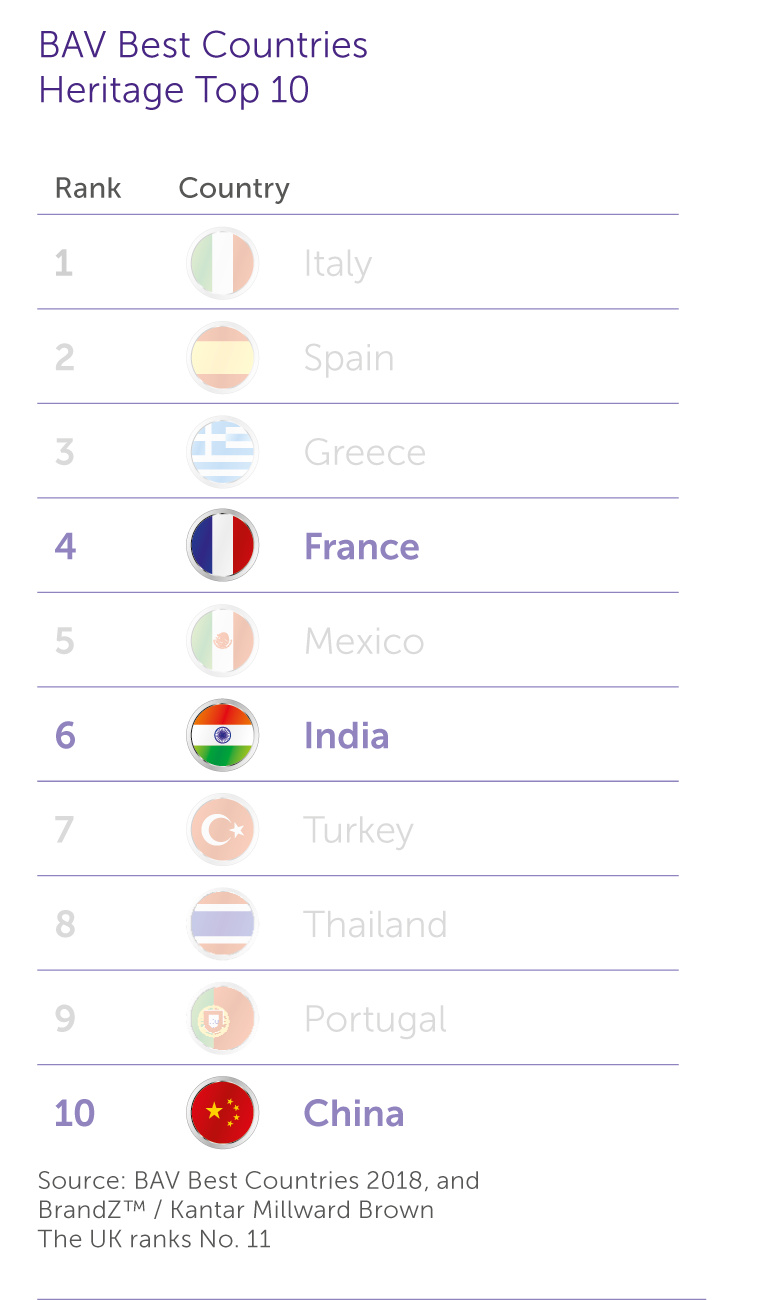 ...BUT MOVERS POINTS TO THE FUTURE

The higher ranked countries on the BAV Best Countries Movers Top 10, China and India, have added brands to the Brand™ ranking relatively recently. Indonesia ranks No. 23 in Movers. In contrast, The US ranks No. 29, Germany No. 35, France No. 47, and the UK ranks No. 51. The findings indicate that the countries with most brands in the Brand™ Global Top 100 are viewed as less distinctive and dynamic that countries with fewer brands in the Global Top 100, suggesting that the Brand™ ranking will become more geographically diverse.