Beyond thirst quenching and taste, brands met a wider, alliterative range of need states including, the need to refresh, revive, restore, recharge, or relax. Responding to concerns about health and wellness, brands not only removed sugar but also added ingredients intended to enhance healthiness. They improved sustainability with innovative products and packaging.

Category leaders refreshed their brands to align with changing tastes and appeal to younger drinkers. Pepsi introduced a new tag line, “That’s what I like,” an assertion of independence and preference that aligned with the values of younger drinkers. The tagline appeared on ads for Pepsi, Pepsi Zero Sugar, and Diet Pepsi.

Meanwhile, Coca-Cola Co. executed its strategy of having a beverage for every occasion, with the Coke trademark now extended across Classic Coke, Diet Coke, and Coke Zero, while Coke ownership was less evident for other beverages, like the Innocent brand of smoothies or carbonated soft drink brands like Sprite and Fanta. 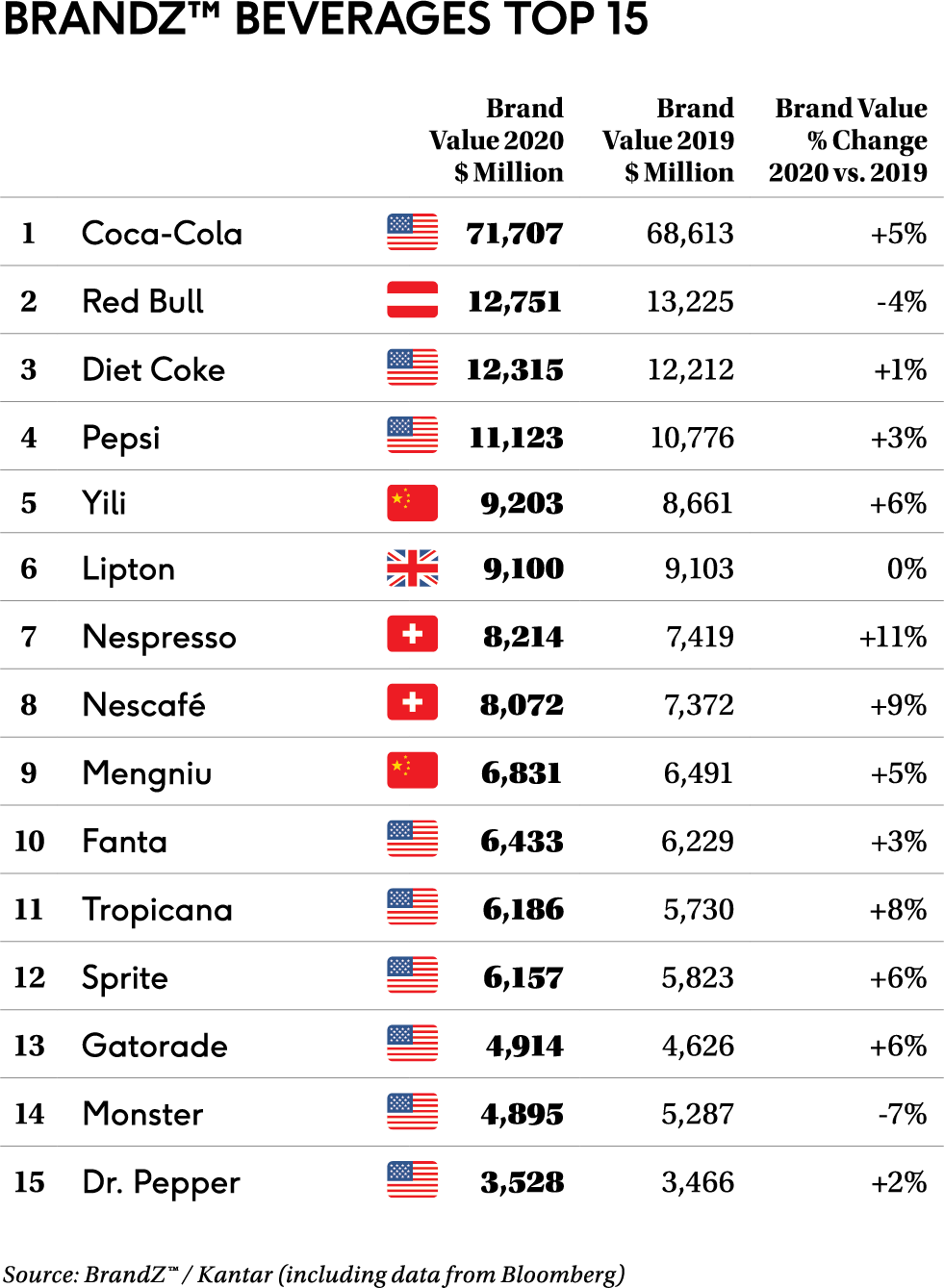 Even as the beverage brands considered a broad variety of needs and occasions, they did not anticipate all the need states that can fill a single occasion shared globally by billions of people living the daily eternity of Covid-19 home confinement. Nor did the brands anticipate the economic shutdown that eliminated out-of-home drinking. The BrandZ™ Beverages Top 15 increased 4 percent in value, after a 9 percent increase a year ago.

With the decline in alcohol drinking, particularly among young people, soft drink producers created non-alcohol substitutes for alcohol-drinking occasions. Coca Cola introduced Bar Nøne, a line of non-alcoholic cocktails that can also be used as mixers and provide a non-alcoholic option for social occasions. It also introduced high-end sparking drinks.

Sprite introduced flavor innovations, including Limeade and Sprite with cranberry, which people use as a mixer. Meanwhile, a Scottish company offered the premium-priced Sparklingly Sober, which it calls non-alcoholic champagne cocktails.

PepsiCo relaunched Drinkfinity, with a new stainless-steel water bottle and pods in several new flavors and ingredients, including caffeine and vitamins, which can customize the drink for various moods and occasions. The product provides portable hydration without plastic bottles, meeting Millennial concerns with health and wellness and sustainability. Half of Americans already claim they use refillable formats, according to Kantar Worldpanel. PepsiCo also researched expanding its flavor offerings for SodaStream, its countertop device for making sparkling drinks.

Based on her portrayal of Wonder Woman, Coke retained actress Gal Gadot as its brand ambassador for an expanding range of its Smartwater brand. In selecting Gadot, Coke intended to find an influencer to represent a smarter way to live. Coca-Cola rebranded Sprite Zero Sugar as No Sugar Sprite and introduced No Sugar Fanta, changes that should better position the brands, particularly in Europe with its sugar taxes.

New energy drinks were formulated to offer healthier ingredients. Tenzing, a plant-based energy drink was available in the UK and other parts of Europe. Coca-Cola positioned Coke Energy to provide the taste of Coke for occasions that require an energy boost derived from natural ingredients. Having first offered Coke Energy in the UK and parts of Europe, Coca-Cola introduced it in the US early in 2020 with a Superbowl ad featuring film director Martin Scorsese and actor Jonah Hill.

Coke Energy competes in the energy space with Red Bull and Monster, which Coke partially owns. Red Bull aims at a young male demographic, relative to Coke Energy and Tenzing. The sports drink category has been impacted by the growth of vitamin waters and other options for post-workout replenishment. Along with PepsiCo’s Gatorade, the sports drink category includes the Coca-Cola brand Powerade and Lucozade, which is owned by Suntory.

Changing demographics and the increase of healthier options has impacted some traditional drinks like black tea, with Unilever considering the sale of its iconic Lipton Tea brand. Ready-to-drink teas have performed better. Lipton’s ready-to-drink business is jointly owned by Unilever and Pepsi. The proliferation of choice also affected Nescafé.

To introduce people to its growing range of new products, Coca-Cola in the US created a subscription service called Coca Cola Insiders Club. For a membership fee, subscribers received monthly samples of the latest Coca-Cola products. The program is intended to drive demand before products reach retail.

Coca-Cola also tested a direct-to-consumer program in Florida, but the approach is difficult to replicate at scale because it potentially could disintermediate the bottler network that is fundamental to Coca-Cola’s distribution.

Because the master brands resonate less emotionally with younger people, compared with older generations that grew up drinking carbonated soft drinks, beverage companies looked for ways to connect with young consumers. Pepsi Lifewater, for example, centered the brand around appreciation of art. The brand is establishing a community around the arts.

To introduce their beverages and encourage trialing, brands sometimes offered variety packs. In China, market leaders Yili and Mengniu, built their presence both online and offline as they faced competition from new competitors primarily aimed at young people and available only online.

Startups often include sustainability as part of their brand proposition, while industry leaders like Coca-Cola and PepsiCo are aggressively advancing packaging recyclability and other sustainability initiatives. Both companies encourage consumers to recycle to achieve a circular economy. PepsiCo pledged that 25 percent of the ingredients in its plastic packaging would be recyclable by 2025.

Coca Cola is replacing shrink wrapping with cardboard. It is developing a bottle made from plastic debris recovered from the ocean. The water category is intensely focused on recycling plastic and using recyclable packaging. Nestlé is making the bottles for its Poland Spring Origin brand out of 100 percent recycled material.

Coca-Cola, PepsiCo, and Nestlé are among the partners of the New Plastics Economy, a group devoted to reducing and recycling plastic, part of the Ellen MacArthur Foundation efforts to advance a circular economy.

Brands met an initial surge in demand for beverages to refresh, rejuvenate, revitalize and break the boredom of home confinement. Brands associated with high energy and extreme sports, Red Bull and Monster, paired especially poorly with indoor board games. And beverage demand dried up at out-of-home channels, with restaurant, bars, stadiums, movie theaters and other venues closed. Although online beverage purchasing increased, it was not clear whether the e-commerce channel will continue to grow as the pandemic eases. It also was not clear if the new, premium-priced functional drinks will fit the post-Covid mentality of people getting back to work and replenishing their savings. Hot teas and other drinks that provide relaxation benefits may rise in popularity, according to Kantar Worldpanel. 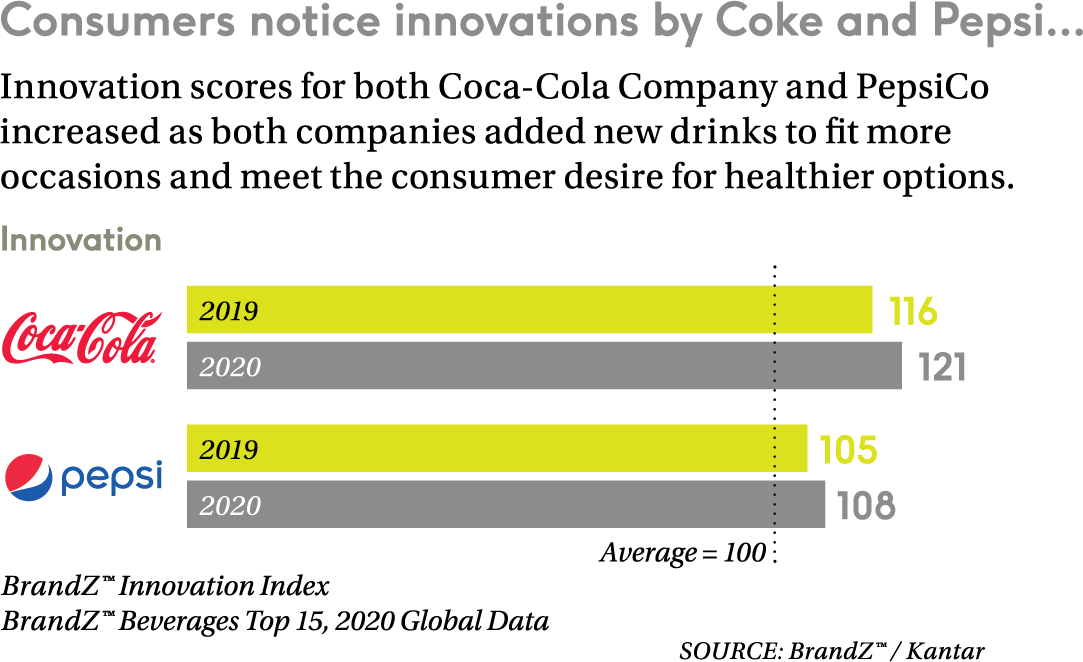 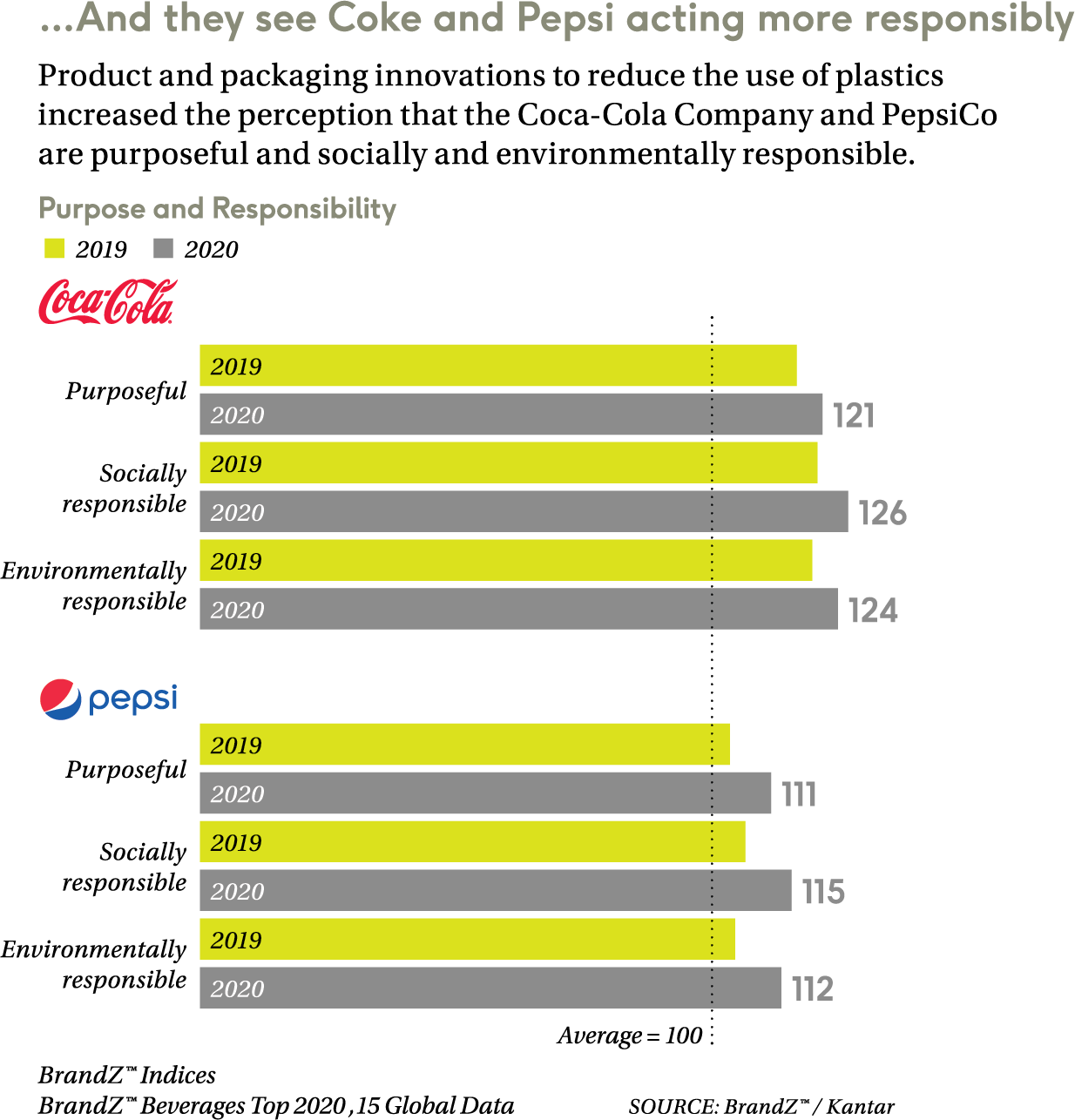 Consumers can be inconsistent, professing that health and wellness is important but eating and drinking in ways that contradicts their best intentions. But brands that act inconsistently leave a bad taste. There is room for indulgence, of course. But it needs to be honestly stated. Brands do the most good for the world and themselves when they enable people to be their best.

Younger brands are appealing to younger people with new tastes, health messaging, and values around sustainability. Heritage brands have the advantage of being able to access their acquired wisdom and leverage their scale to act young at heart and appeal to younger consumers with new products, pop up stores, online marketing, and other innovations.

“Just one word, ‘plastics.’” Ben Braddock ignored the advice in The Graduate, but 50 years later a lot of people are listening. Today, brands play an important part in reducing our reliance on plastics to protect the environment. NGOs and government will track progress, but the ultimate accountability will happen at the point of sale. Act responsibly. Participate in credible recycling and sustainability programs that can help protect the environment, and the brand.