The most valuable Spanish brands in 2019 are worth a combined US$103.9 billion, which represents annual growth of 1 percent – below the rate of growth of the national economy, and behind the growth rate seen among leading brands in other developed markets.

Behind this topline figure, however, is a more complex picture. Very few brands have posted growth at this average level; they have either grown significantly, or declined in value by some margin, and 1 percent is simply the overall effect. In all, 16 brands in the ranking increased their value since last year, while 12 declined.

The ranking features brands that have not just become household names here in Spain, but many that are also regarded as global leaders in their categories. Around half of the brands in the Top 30 are what we would consider international brands, and the other half have an exclusively domestic focus.

Zara is one of Spain’s best-known export brands, and tops the Spanish Top 30 for the second consecutive year, with brand value of $24.8 billion. As in last year’s inaugural Spanish ranking, Movistar, Santander, BBVA and Iberdrola round out the Top 5, having achieved growth rates ranging between -1 percent (Zara) and 13 percent (Santander).

While there have been some sizable ups and downs among Spain’s most valuable brands, the rest of the Top 10 is largely unchanged from last year, although Mercadona takes 10th place this year (up from 11th last year), despite a dip in its brand value. This apparent oddity reflects the nature of Spanish brands’ fortunes in the past 12 months, with big swings both up and down.

Another surprising finding is that the brands that generate the highest proportion of their income from international markets are those that, generally, have fared worse than those that only operate in Spain. Usually, we find that brands with a greater geographical footprint spread their exposure to the volatility of their home market’s fortunes.

In the 2019 Spanish ranking, the opposite seems to be true. The global brands have collectively declined in brand value, while the domestic brands and those that have roughly equal split between Spain and the rest of the world have fared much better. This finding is mainly the result of the Inditex brands having seen dips this year; the fast-fashion market is incredibly competitive, and has become increasingly so in the past year with the rise of more Chinese rivals, as well as competition from closer to home, such as Germany’s Zalando.

The overall 1 percent growth rate in the value of the Top 30 is low compared to that of leading brands in other markets. The value of the Top 50 UK brands grew by 5 percent over the same period; leading French brands – largely driven by global names in luxury – rose in value by 22 percent, and the Top 50 Germany brands grew in value by 11 percent. 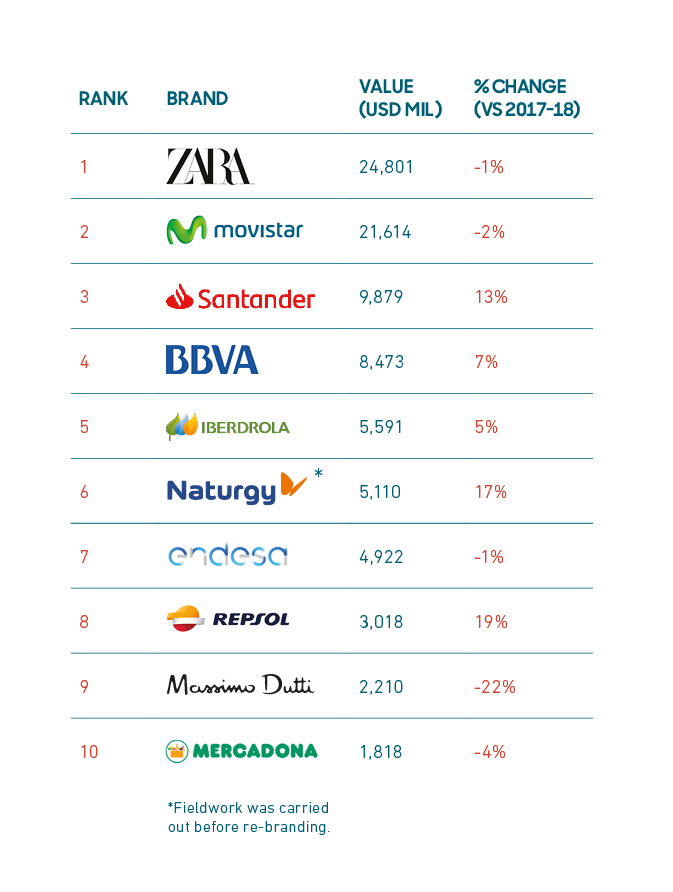 Two brands with similar financial scale can therefore find themselves in quite different positions in the ranking. This is because there is a difference in the proportion of their intangible value that is brand driven, rather than market driven. That is, they each have a different “power in the mind” of consumers, and this can propel them up or down the Top 30.

In the Spanish Top 30, the power in the mind is very different for different brands.

Cruzcampo, for example, which ranks 21st this year, has a brand contribution score of five out of five. This means a high proportion of its intangible value is driven by the brand, and it supercharges the brand, so it achieves a brand value of almost $690 million.

Banco Sabadell meanwhile, has a brand value only marginally higher, and is in 22nd position in the 2019 rankings. But Banco Sabadell has a lower brand contribution score – two out of five – because it is more dependent on operational aspects and the extensive presence of its branches for its prominence in the market, whereas for Cruzcampo, the brand is the biggest source of value.

High valuations – indicating strong brand equity – also help insulate a brand against decline when times are tough. In challenging times, strong brands tend to be more resistant to a downturn and, when market conditions pick up, they recover faster than the competition.

Beer and entertainment brands are the best performers on Brand Contribution in the Top 30 this year, but it’s not just the brands that seem like more fun that can generate power in the mind. The bank BBVA and insurer Mapfre – both with Brand Contribution scores of four out of five – show that category is no boundary to building this aspect of a strong brand. 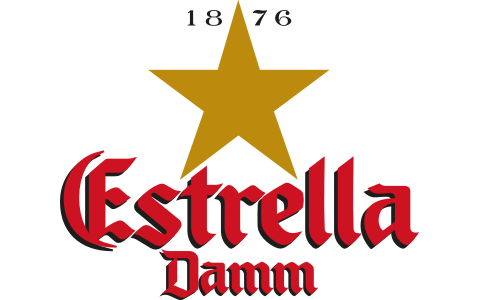 The beer brand from Barcelona is the only new entrant to the Spanish Top 30 this year, making its debut in 27th position with a brand value of $307 million (and a Brand Contribution score of four out of five). Estrella Damm has been brewed according to the same recipe since 1876, and is the oldest beer brand in Spain. The name Estrella means “star” in Spanish.