But is India positioned to rise in the ranking

India and China share much in common, including a population size of around 1.3 billion people, a 2,500-mile border, and the distinction of being modern states developed from civilizations dating to the dawn of human history, around 5,000 years ago.

In the mid-twentieth century, both countries reached important turning points. India gained independence in 1947, becoming a democratic republic following centuries of rule by the Mughals and then the British. China established the Communist People’s Republic of China, in 1949, culminating a long, disruptive period after the fall of the Qing Dynasty almost 40 years earlier.

And both countries faced similar a similar challenge: to reduce poverty and drive economic growth, while expanding opportunity and maintaining social stability. In 1979, with the first Special Economic Zones established by Premier Deng Xiaoping, China began sprinting. With economic liberalization, introduced in1991, India adopted the stride of a long-distance runner, picking up the pace with the election of Prime Minster Narendra Modi, in 2014.

China is in its Thirteenth Five-Year Plan, propelled by the efficiencies of centralized economic and political control. Restrained by its democratic process and extensive bureaucracy, India only recently harmonized the various taxations systems of 29 states and seven territories, with the implementation of a national goods and services tax (GST).

Differing systems and experiences have also shaped the way the outside world views China and India, according to BAV’s Best Countries data, which reveals: (1) China ranks higher than India across almost all 65 attributes BAV uses to measure how people worldwide—both the general population and business decision makers—view 80 different countries; and (2) India is well-positioned to rise in key attributes.

For example, in these attributes—Entrepreneurial, Politically Influential, and being A Leader—China ranks No. 3, and India ranks within the Top 15. China ranks No. 4 in Technical Expertise, and India ranks No. 14. The company a country keeps is indicative, too. Immediately preceding India in Technical Expertise are countries with strong technology reputations: Finland, Sweden, Israel, and Canada.

Based on the assumption that differentiation is an important predictor of future growth, BAV created a category called Movers by aggregating these attributes—Distinctive, Different, Unique, and Dynamic. BAV found that India ranked No. 3 in the Movers category, below the United Arab Emirates and Singapore—and above China. 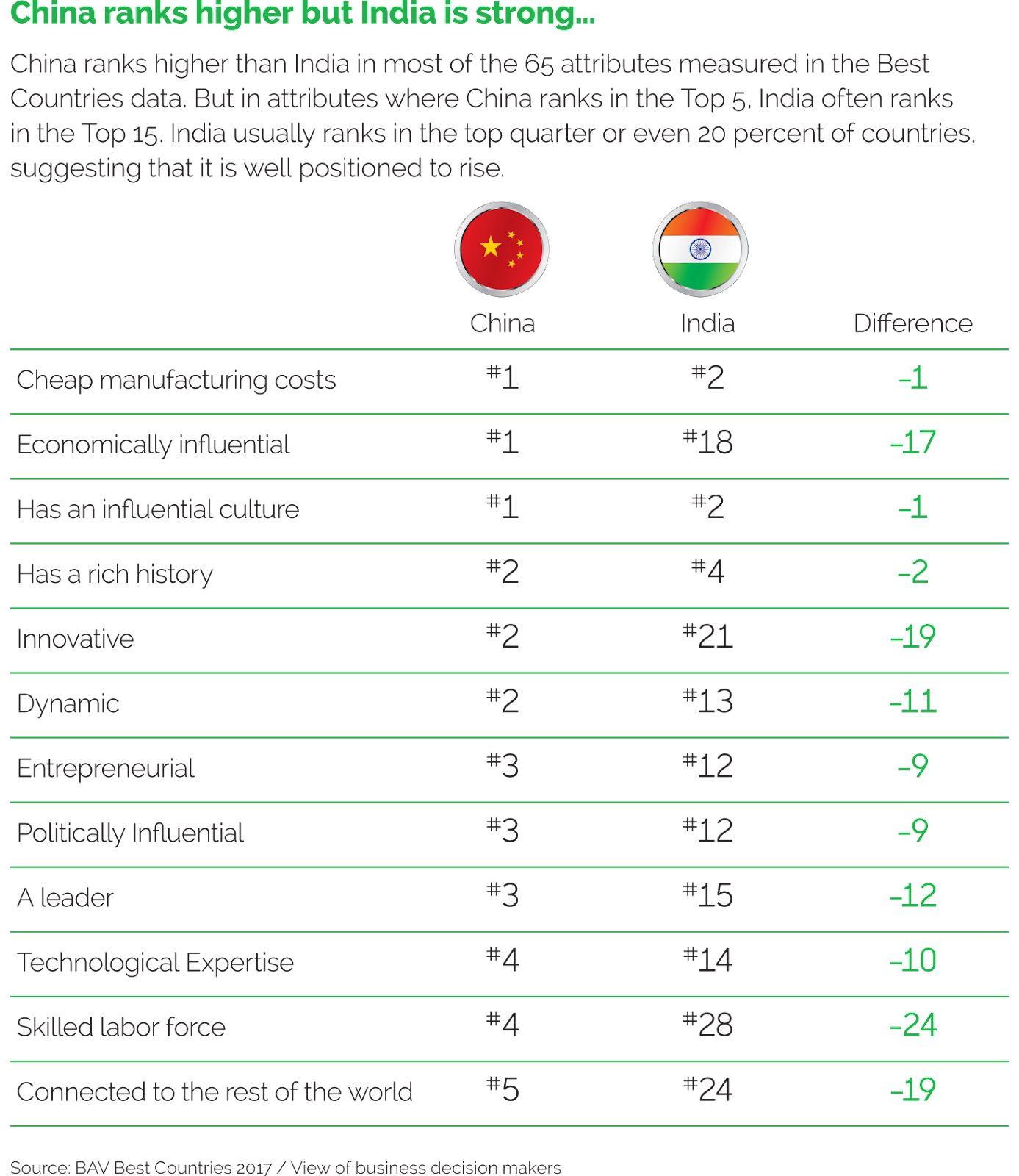