Outside perception of India may lag economic progress

Seventy years since its establishment as an independent state free of British rule, and over two decades after the first economic liberalization policies, India is purposefully asserting itself as a global geopolitical leader.

Major reforms intended to streamline the bureaucracy, create a more business-friendly environment, and stimulate consumer spending are having an effect. The IMF predicts that India’s GDP will grow 7.2 percent this year, somewhat off the recent pace, but still faster than all other major economies.

The pace of change also depends on how the outside world views India. New research by Y&R’s BAV Group, a WPP company, provides a definitive assessment in the Best Countries 2017 study, completed by BAV in collaboration with US News and Wharton Business School.

The study is based on interviews with 21,400 elites, business decision makers, and citizens from 36 markets rating 80 countries across 65 brand attributes. The attributes are then grouped into these nine thematic subrankings or dimensions: Adventure, Citizenship, Cultural Influence, Entrepreneurship, Heritage, Movers, Open for Business, Power, and Quality of Life.

India ranks No. 25 overall, below Portugal and above Thailand. It ranks in the Top 10 in two of the nine dimensions: Movers, No. 3; and Heritage, No. 5. And it is No. 16 in Power. These subrankings indicate that people outside of India recognize the country’s historical cultural achievements, but also see it as dynamic and influential.

Business decision makers rank India slightly higher overall, No. 24. The Best Countries data suggest that business leaders worldwide have high regard for India as a distinctive, culturally significant nation that has contributed much to world civilization and has great potential. They rank India No. 2 in Heritage and No. 2 in Being a Mover. But they are less approving in business dimensions, ranking India No. 23 in Open for Business and No 28 in Entrepreneurship.

The Entrepreneurship rank includes low scores on the attribute called Well-Developed Infrastructure. Business decision makers rate India higher on Entrepreneurial and Innovative, two attributes that could help strengthen the perception of Brand India as a symbol of global geopolitical and economic leadership.

The Entrepreneurship and Innovation attributes correspond to the vision of a New India, advanced by Prime Minister Narendra Modi. Since his election three years ago, Modi has launched a series of initiatives, including:

Make in India to increase overseas investment in India and encourage companies to produce in the country;

Digital India to narrow the urban-rural divide and increase access to government services, health care, and other vital services, as well as to products and brands;

Demonetization to raise tax revenue, reduce corruption, and curtail the black-market economy by weaning the country from dependence on cash and moving to electronic payments; and

GST to increase tax revenues and improve the ease of doing business by replacing myriad state and local levies with a simplified national goods and services tax.

Coming from Gujarat, a state on India’s western coast long known as a center of industry and international trade, Modi seemed well suited for the monumental task of transforming and rebranding India.

In many ways, everyday life is catching up to his vision. Material well-being is improving, the urban-rural gap is narrowing, and local brands are flourishing. But the promise of change has also generated impatience. And the rise of nationalism adds new frictions.

The external perception of India’s progress may somewhat lag this reality. But changing the outsider perception requires fixing some fundamentals. Business decision makers rank India No. 33 in Transparent Business Practices, No. 29 in Trustworthy, No. 50 in Well-Developed Infrastructure, and No. 63 in Not Bureaucratic.

In addition, the relatively positive perception that business decision makers have of India in the Innovation and Entrepreneurship attributes leaves room for narrowing the gap between that India’s rank in Innovation, No. 21, and its rank in Entrepreneurship, No. 12.

The higher rank in Entrepreneurship reflects India’s reputation as a “nation of shopkeepers,” and the visibility of Indian business people worldwide, with around 16 million Indians living in a diaspora, according to the UN.

The lower Innovation ranking may result in part from the lingering impression of India as a nation with a workforce of technicians. This notion of India as a service provider is a legacy of its colonial past. The character of India’s startups also helps explain the difference between India’s ranks in Innovation and Entrepreneurship.

India’s startups are to Silicon Valley what Bollywood is to Hollywood. Indian startups create superb products that meet the needs and tastes of the local Indian market, but many products are imitative and most lack global impact.

Flipkart resembles Amazon, for example, and these other brands are similarly related: Uber and Ola; Expedia and goibibo; and Alipay and Paytm. These comparisons do not minimize the accomplishments of Indian startups, but they add context.

The Indian startups are not Google, Apple, Facebook, Amazon, or Microsoft—which is understandable—and neither have they reached the scale of Baidu, Alibaba, or Tencent, Chinese brands that imitated technology leaders and now are ranked in the BrandZ™ Top 100 Most Valuable Global Brands. Innovative Chinese brands also dominate the BrandZ™ Chinese Global Brand Builders 2017 ranking.

India’s technology brands may have greater global growth potential than the Chinese brands, however, because they are not restricted by an internet firewall. And this possibility suggests India’s potential to raise its Innovation ranking.

India’s lower Innovation ranking does not result from a lack of talent, as evidenced by the Indian presence in Silicon Valley, which includes Indian-born Americans like Microsoft CEO Satya Nadella and Google CEO Sundar Pichai. But these individuals also point to another reason why the Innovation ranking is relatively low—until recently, ambitious individuals often went abroad to pursue their careers.

The Innovation ranking of India should improve as local opportunity continues to expand and the brain drain eases. India could experience a renaissance that recalls the history of Indian innovation that Modi references: the India credited with inventing a numbering system; Ayurvedic medicine; and Sanskrit, the basis for Indo-European languages.

India is well positioned to break into the Top 10 in several important, business-related attributes. Along with its No. 12 rank in Entrepreneurship, India ranks No. 13 in these in these two attributes: Being Politically Influential and Dynamic. It ranks No. 14 in Technological Expertise, and No. 15 in being A Leader.

India does not control all the factors influencing change or the perception of change—geopolitics is always a wildcard. But in India, the government and Indian citizens can largely shape their future. And as more Indians experience change—increased wealth, greater access to jobs, better roads, cleaner air, shorter queues—the rate of change should increase.

Sustaining change depends on reinforcing the pillars of India’s grand and diverse democracy of 1.3 billion people and 22 official languages. India ranks No. 52 overall in Citizenship. Business decision makers rank India No. 28 in Citizenship. The Citizenship category includes attributes such as Gender Equality and Cares about Human Rights—attributes that are fundamental to India’s democracy, and to the social stability necessary for business growth and the elevation of Brand India. 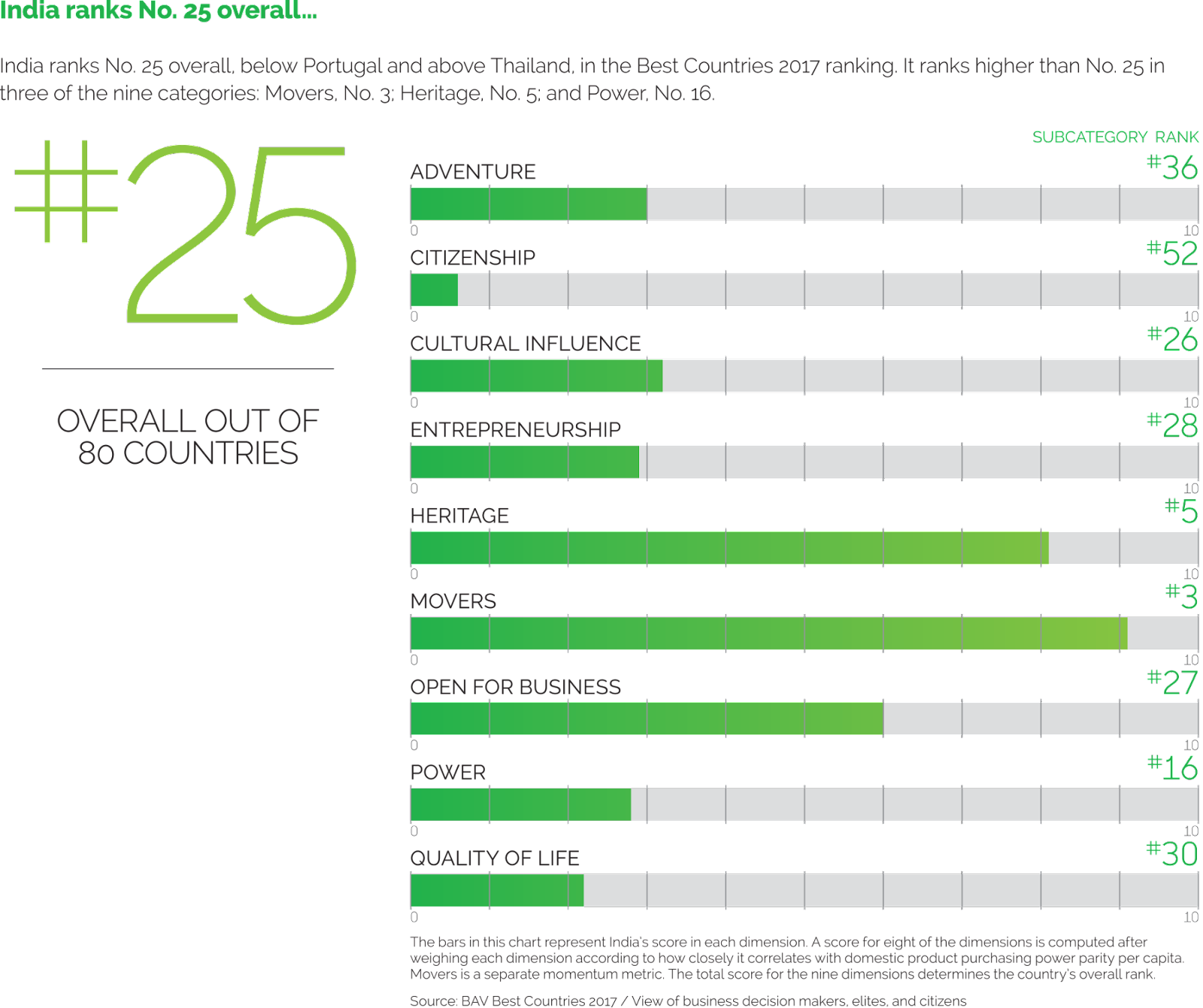 … And India ranks in the Top 10 in two subcategories…

India’s Top 10 rank in the Heritage and Mover subcategories indicates that the general population outside of India recognizes the country’s historical cultural achievements, but also see it as dynamic and influential.