Soft power is key driver of a nation’s brand value

India’s lower rank is inconsistent with its history

Soft power, the ability to exert influence with cultural and human capital rather than military might, is key to building a powerful nation brand, according to the Best Countries data. Although India has exerted this kind of influence—since long before it was called soft power—people outside of India view the country as low on many attributes that contribute to soft power.

This disconnection is important because a nation’s perceived soft power correlates with its brand equity, according to BAV analysis. Soft power attributes—combined into the categories of Citizenship, Quality of Life, and Entrepreneurialism—drive 57 percent of a nation’s brand equity, while more conventional measurements of power drive only 8 percent.

In the Best Countries 2017 ranking, compiled by Y&R’s BAV Group with US News and Wharton business school, the Top10 countries overall closely match the leaders in Citizenship, Quality of Life, and Entrepreneurship. The overall Top 10 Best Countries are: Switzerland, Canada, the UK, Germany, Japan, Sweden, the US, Australia, France, and Norway.

Despite perception, India’s soft power credentials are indisputable. The nation’s engagement with its neighbors is historically known for the spread of innovative ideas—Hinduism, mathematics, language, and Ayurvedic medicine—not conquest. India has never sought to be an imperial power, although it has been subjugated by empires.

The Mughals invaded India from central Asia in the early sixteenth century, and ruled until the British displaced them and India became a colony. The philosophy of Mahatma Gandhi, which helped India win independence from British rule, was a remarkable demonstration of soft power, achieving national liberation using non-violent political means.

Raising India’s perceived soft power today requires improving its ranking in the three categories of attributes that drive the soft power score. India’s ranks in categories are: Citizenship, No. 52; Quality of Life, 30; and Entrepreneurship, No. 28. In each instance, India lags in certain underlying attributes.

Quality of Life India needs to improve its scores on these attributes: Income Equality, Well-Developed Public Education System, and Safe.

For India, or any country, to improve in these attributes it could help to learn from—but not necessarily imitate—the soft power leaders. Except for Canada, the top-ranking countries in Citizenship, and Quality of Life are European, often Nordic.

The Top 5 countries in Citizenship are: Norway, Sweden, Switzerland, Canada, and Finland. The Quality of Life Top 5 are: Canada, Sweden, Denmark, Australia, and Norway. The Top 5 leaders in Entrepreneurship are: Germany, Japan, the US, the UK, and Switzerland.

China may best illustrate determination to influence the perception of soft power. Like India, China does not rank high in the three attributes of soft power, but it ranks higher than India. China’s higher rank may result from its soft power initiatives, like One Belt, One Road, and an effort to establish trading links that recall China’s Silk Road commerce during globalization’s earliest days. China has also affirmed its commitment to slowing climate change.

India’s lower scores may be appropriate for a small country with regional ambitions, but India will soon surpass China as the most populous nation on the planet. and strengthening the India’s perceived soft power should help the nation build brand value and achieve its political and economic ambitions. 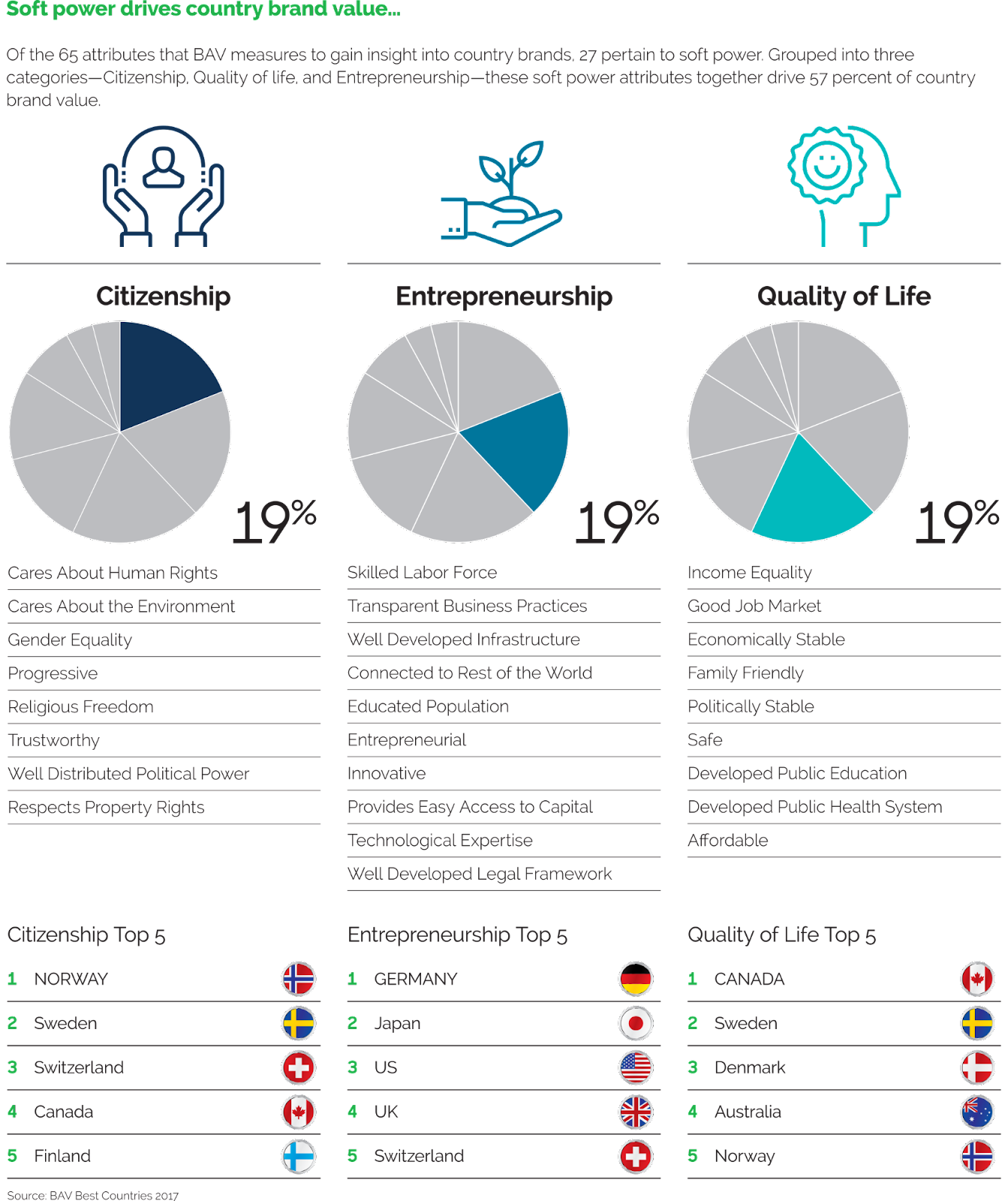