The total value of the BrandZ Top 40 Most Valuable Australian Brands in 2019 is US$96,783 million. This is 5 percent lower than the value of last year’s Top 40, and comes against a backdrop of slow but steady growth in the Australian economy.

So, why the decline? There are several reasons for this, and they relate to the categories in which the most valuable Australian brands operate. These are categories that, in the past year, have been shaped by some extraordinary events affecting both their financial value and their status in the minds of consumers – the two factors that combine to determine BrandZ brand value. 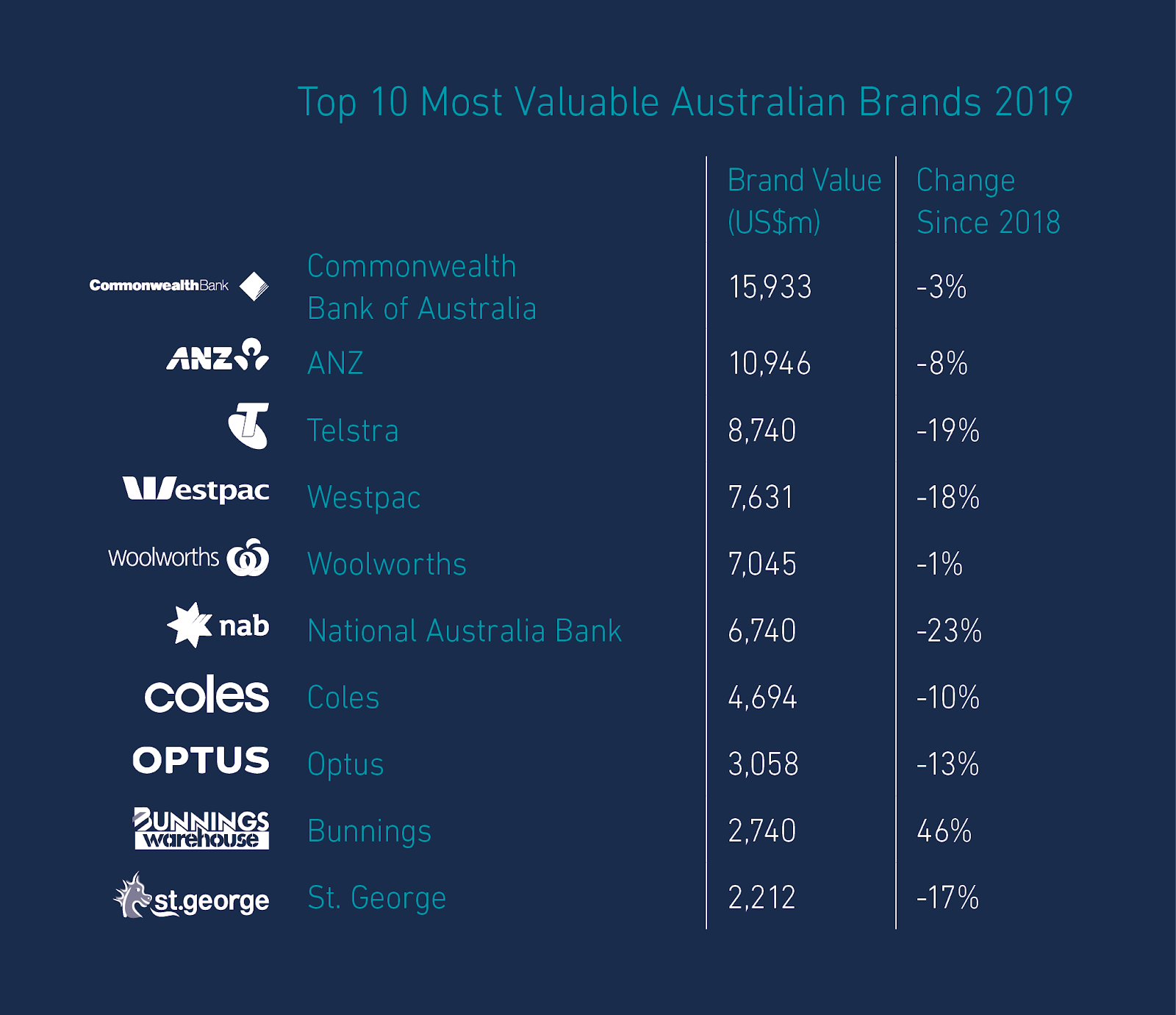 There is a strong opportunity for businesses in Australia to build value by investing in their brands.

When we compare the Top 30 Australian brands to those in other markets (we use 30 rather than 40 because some BrandZ rankings only include 30 brands), we find their total value is significantly lower than for most other markets. Only South Africa and Indonesia have a lower total value.

A look at the average value of Top 30 brands worldwide highlights the fact that, while Australia’s leading brands are much stronger than the average in the country, brand for brand, Australian brands are contributing less to their businesses than their counterparts in other countries. This gap is an area of opportunity. 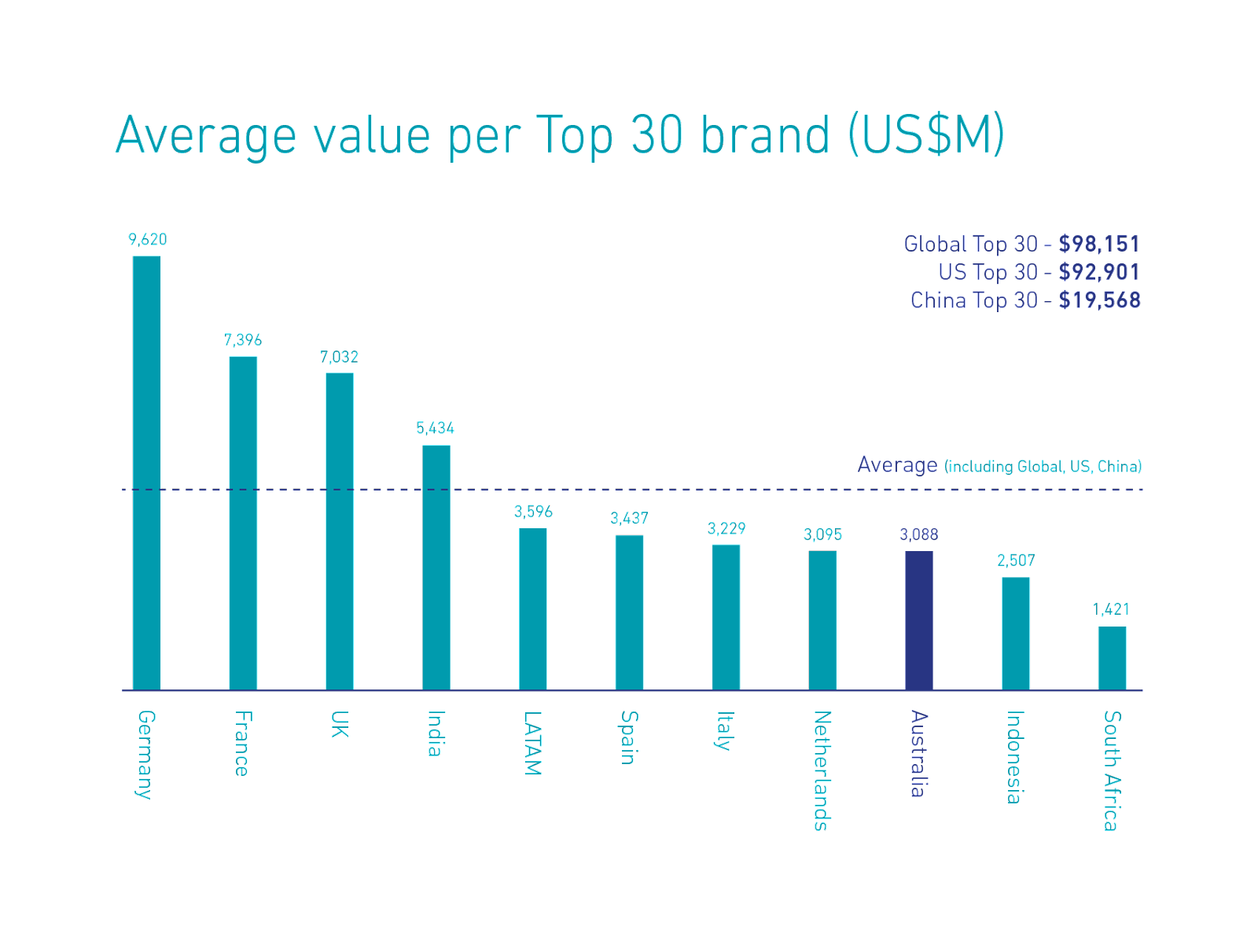 Strong brands are valuable to businesses for two reasons – both of which link directly to the bottom line.

Secondly, and of particular importance to Australian brands this year, is that strong brands help insulate a business during times of difficulty. This applies whether that trouble is of a brand’s own making, or is part of a category-wide or even country-wide decline. During the 2008 global financial crisis, the BrandZ strong brands portfolio of shares suffered a less-sharp drop in value than the MSCI World Index, and recovered far more quickly.

In the banking section of this report, we show how the fallout from the Royal Commission hit some banks harder than others – and we see the insulating power of the strongest brands.

There are seven banking brands in the Australian Top 40, and between them they account for not only five of the Top 10 places in the ranking, but also 47 percent of the Top 40’s total value.

The fact that banks have declined in brand value this year by close to US$6 billion (the banks appeared both in 2018 and 2019’s ranking) between them goes some considerable way towards explaining the overall decline in the ranking. We look more closely at how the different banking brands fared, but in essence, the entire industry has taken a huge hit – both financially and in terms of public opinion – due to the revelations of the recent Royal Commission, which shed light on widespread practices that put profit ahead of consumer wellbeing. 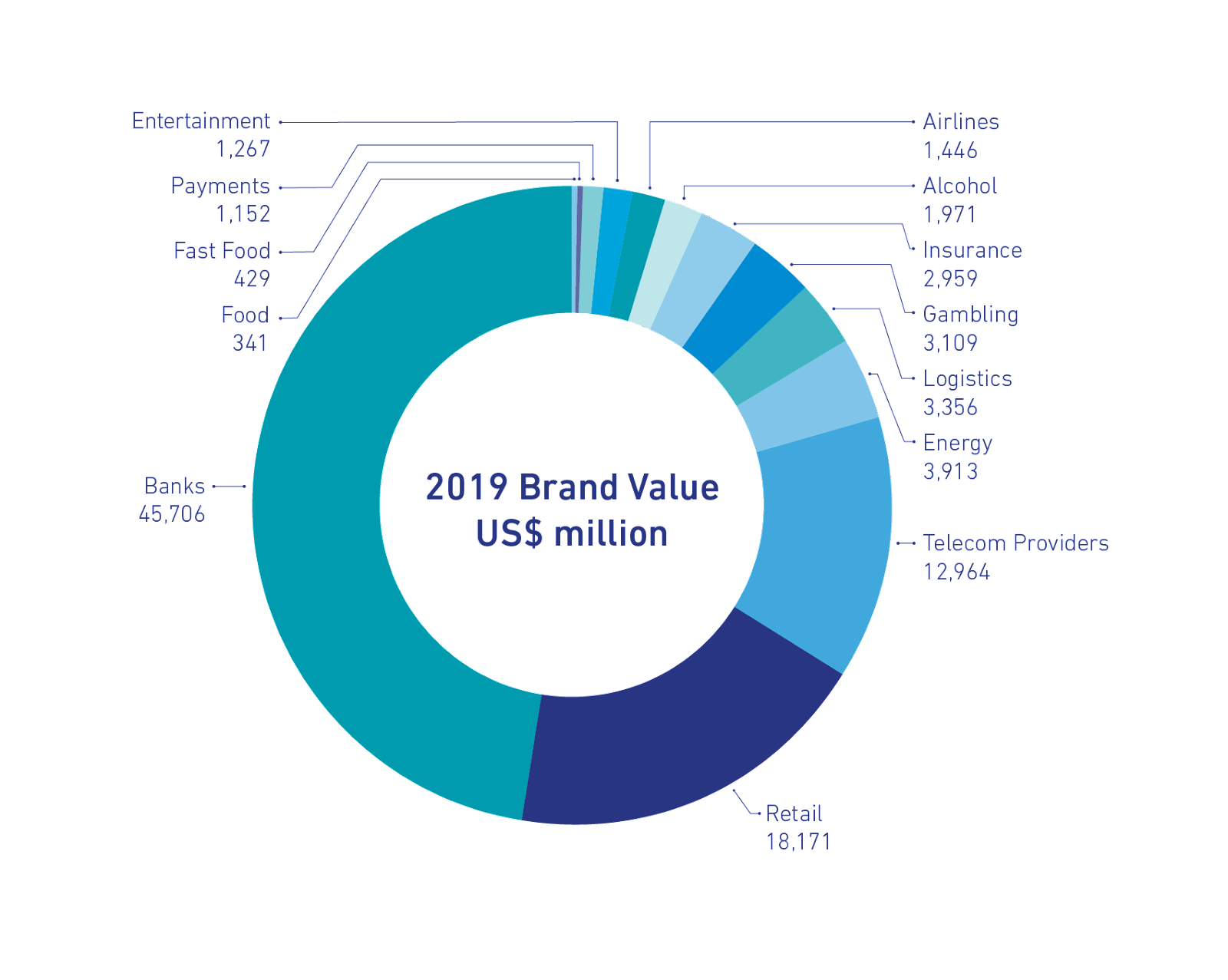 Communications providers and utilities also took a hit this year, with $3 billion knocked off the value of the telecom providers’ combined value, and the energy brands losing over $1 billion.

In telecommunications, industry giants Telstra and Optus have seen their value fall in the past year. Telstra’s 19 percent drop in brand value is largely linked to the somewhat bumpy rollout of the National Broadband Network (NBN), a government initiative to connect every Australian to the internet. While the project has benefited consumers who were previously unable to get online, those who had been enjoying high-speed Telstra cable connections and who have been forced to switch to the often-slower NBN have, naturally, been less happy and have been switching to other, lower-cost providers. Telstra’s 2018 profits were down 8.9 percent, with the company saying the effect of the NBN had been “profound”, especially when coupled with increasing competition for mobile customers. There are now four mobile networks in Australia; relative newcomer to the sector TPG is another BrandZ Top 40 brand, and rose in value by 7 percent this year.

The trouble at Optus (down 13 percent in brand value) is similar to that at Telstra, in that it has also been affected by the NBN, though to a lesser extent. A complicating factor, however, is that Optus was the rights holder to show the 2018 World Cup; its coverage was beset by technical problems that made many matches unwatchable in Australia, and public opinion of the brand suffered as a result.

In the energy sector, rising competition – and rising prices – in recent years help explain declines in brand value for brands in this sector. This is an industry that is still fairly newly deregulated; consumers are becoming aware they have more choice, but prices are going up, not down, due to scarcity of supply and rising demand. Prices have actually risen more quickly in states where there are more suppliers to choose from, likely to be the result of energy suppliers having to build in the cost of customer churn.

The retail sector is also facing increased competition, with discounter Aldi now accounting for around 15 percent market share among the supermarkets, with most of the remaining trade split between rival giants Woolworths and Coles. The two tend to make gains and losses at the expense or advantage of the other; both have run marketing campaigns in the past year aimed at securing shopper loyalty by offering collectible toys. Woolworths ranks fifth in the Top 40 this year (down 1 percent) and Coles takes seventh place, down 10 percent. 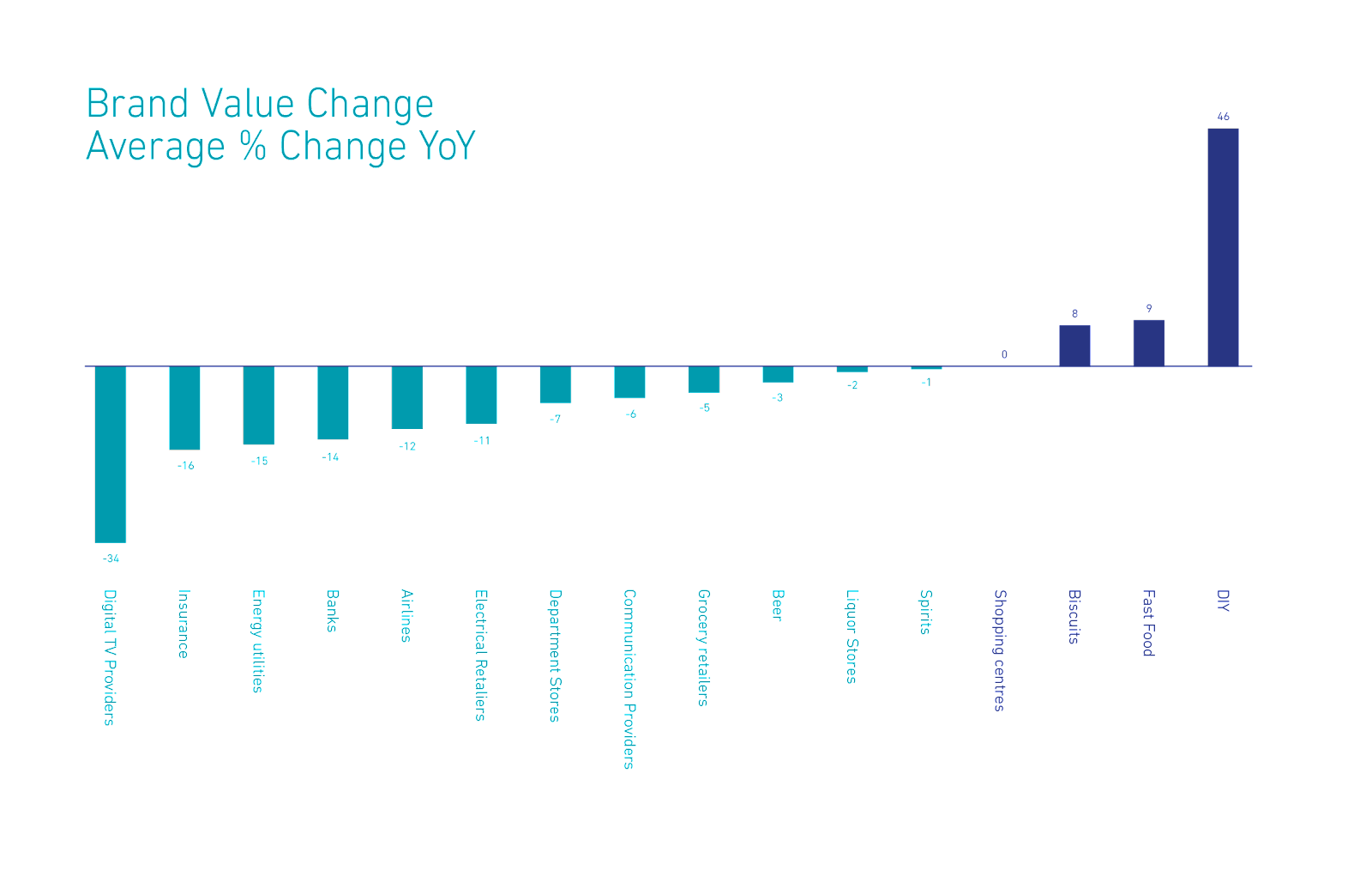 Eight new brands have joined the Top 40 this year, largely as a result of the study being expanded to include new categories. The addition of logistics, gambling and payments this year accounts for seven of the new additions, with insurance brand QBE also making the ranking this year, joining in 19th place, largely thanks to global revenues. 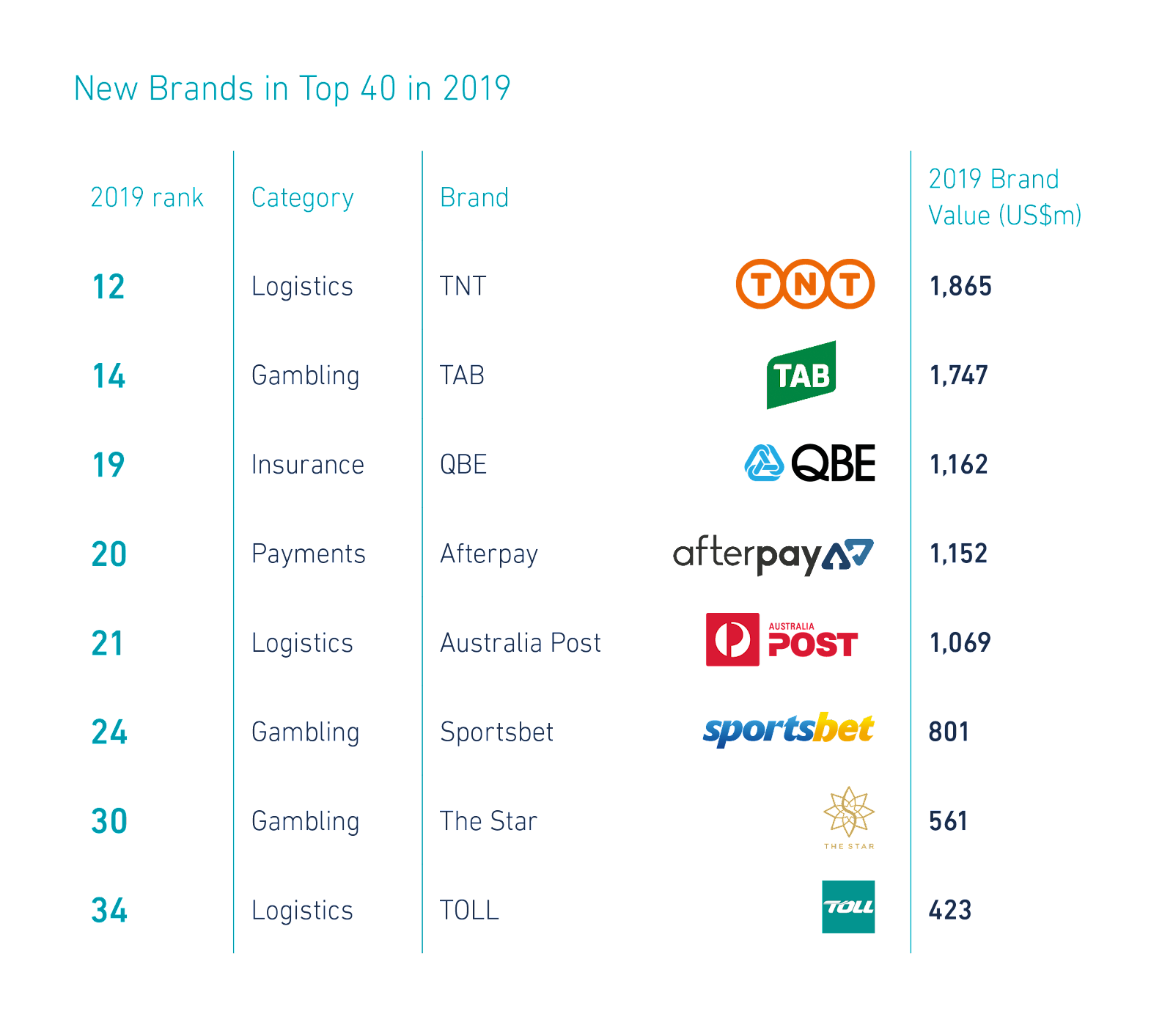 The biggest decline in brand value this year was for digital TV provider Foxtel. Foxtel was for many years the only alternative consumers had to free-to-air TV, but those days are over. In addition to content made available to Telstra and Optus customers, Australian consumers can now access Netflix and the Nine Entertainment streaming service Stan. The rise of Netflix in Australia has been phenomenal, with more than 11 million subscribers signed up to the service. This compares to around 2.8 million for Foxtel, which is 100,000 users fewer than two years ago.

Netflix has established a very strong brand equity in a very short time in Australia. It outperforms its main rivals by some margin on key measures of brand health, which in turn is a powerful indicator of strong brand value. 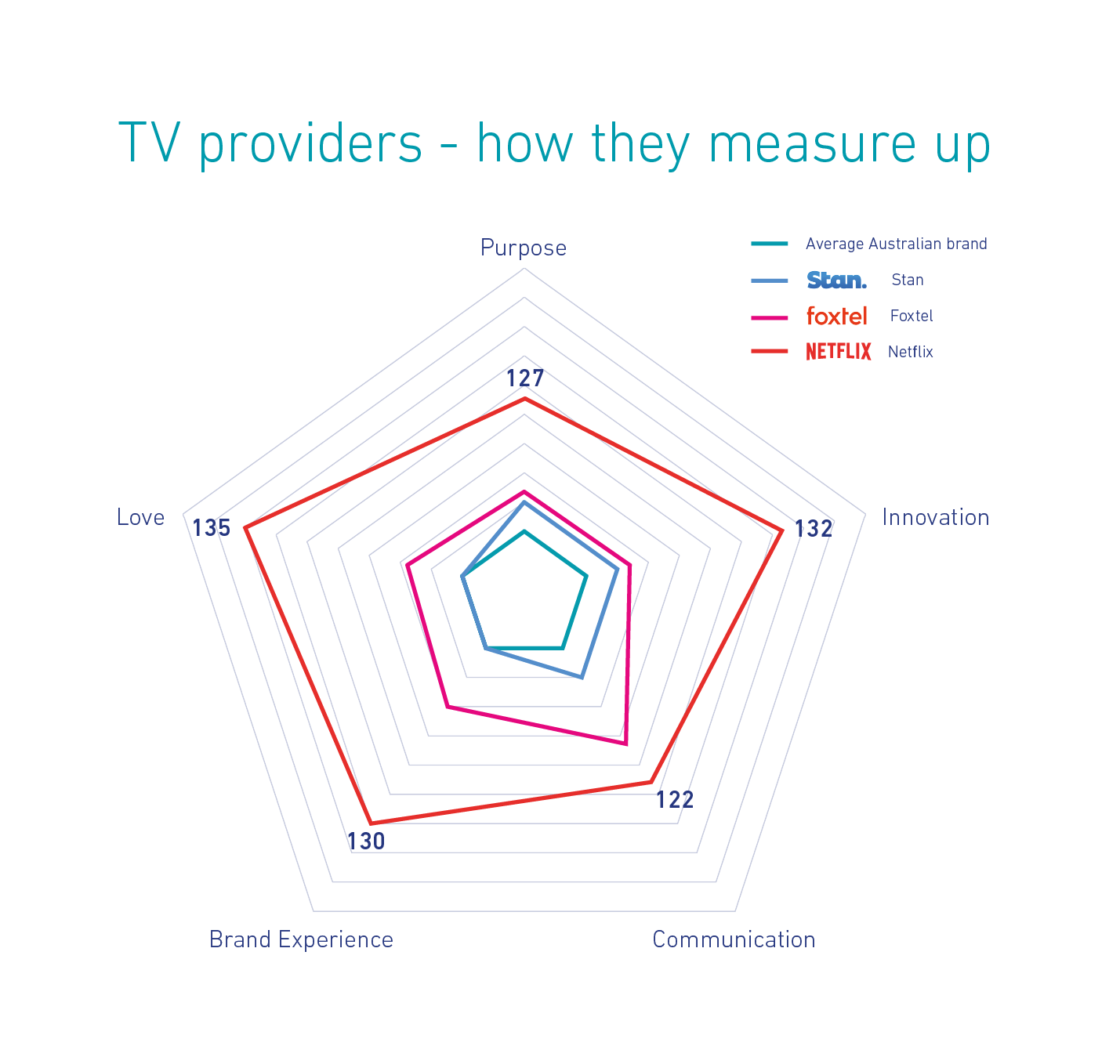 Very few of the most valuable Australian brands are making the most of the international opportunity. Overseas exposure for these brands is very low when compared to that of leading brands in other BrandZ markets. In fact, only three of the Top 40 Australian brands generate the majority of their exposure from outside the country (Foster’s, QBE and TNT).

This is despite a ready appetite around the world for products and services that come from Australia. In the Best Countries section of this report, it is evident that international audiences want to buy Australian, but few brands are currently catering to them. 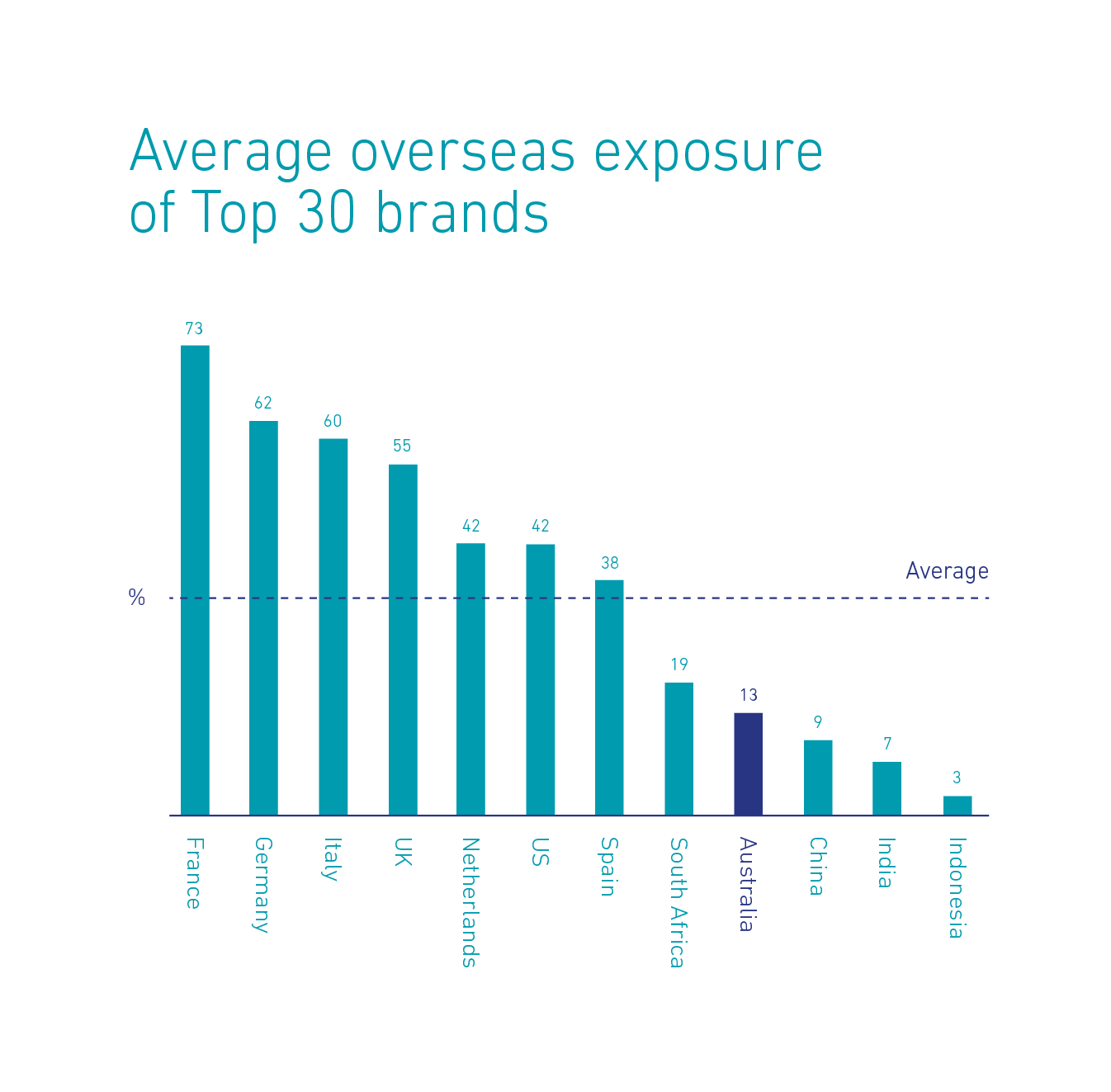