The most valuable French brands in 2019 are led by global giants in luxury, personal care, telecommunications and insurance. LV tops the French ranking for the second year running, with a brand value of $46,357 million – up by more than a third in the past 12 months. It is followed by the grand dame of French design, Chanel, worth $39,241 million, and Hermès follows in third place. The rest of the Top 10 is largely unchanged since last year, with L’Oréal Paris, Orange, Lancôme, Cartier, SFR, AXA and Garnier completing the line-up.

These are not just strong French brands but powerful and well-loved global brands, and their international appeal means that when times might be tough in some markets, that’s likely to be offset by stronger growth in other countries. Rising brand value for many of the most prestigious brands in the French ranking is coming from parts of Asia, the Middle East and Africa, where growth in disposable income means more people are able to spend on premium names.

The combined brand value of the BrandZ Top 50 French Brands is the equivalent of around 11 percent of national GDP. And, if you’ve got the time, the money and a long ladder, the total value of the Top 50, in €5 notes placed end to end, would reach to the moon and back 15 times.

Growth in the total value of the ranking this year was 22 percent – great news at any time, but especially in light of growth patterns around the world over the same period. The leading 100 brands in China and our Global ranking – usually streets ahead of growth in other markets, given that they’re led by the world’s ever-expanding tech giants – grew by 23 and 21 percent respectively.

The fastest-growing brands in the 2019 ranking come from the upper reaches of the ranking. This is contrary to what we tend to see in most other BrandZ ranking, where the fastest growth tends to come from smaller brands working their way up.In France, even the number one brand – Louis Vuitton – has grown by nearly one-third in value and ranks among the fastest 10 risers.

Five of the 10 fastest risers in France this year are luxury brands: Dior, LV, Saint Laurent/Yves Saint Laurent, Givenchy and Hermès. High-end spirits brands have also shot up this year, led by Rémy Martin and Martell, and while Sephora is classed as a retail brand, it’s a premium offering within its category. This all reflects the return to growth globally of the luxury market, thanks to rising spend by international travelers, and stronger consumption patterns at home in key markets for the sector, such as China, Japan, the rest of Asia, and the United States.

Yet growth in BrandZ rankings does not come about solely as a result of a rising market or sector; the presence of EDF and Citroën among the fastest-growing brands this year – both in categories where there was not strong growth across the board – shows that while external factors can have a bearing on a brand’s ability to grow, it is still possible to significantly outperform sector averages, and to buck trends by growing value when the rest of a sector declines. Put simply: brands have the power to make their own luck.

What these fast-rising brands have in common is a particular strength in communications (22 percent better than the average brand), and in delivering an outstanding brand experience (13 percent ahead of average) to consumers. These are two of the key elements of overall brand health.

Dior was the fastest-growing brand in the French Top 50 this year, up 58 percent. This is a brand steeped in history, having launched 73 years ago. Yet this legend of luxury is a fine example of how a heritage brand can not only keep up with the times, but also help define them. The brand has gradually expanded into new categories, and in the past year has been promoting its fine jewelry, particularly in China. It has been strengthening the links between fashion and cosmetics with the launch of its Dior Backstage range, and has been highlighting the under-representation of women in the history of art as part of a broader pro-feminism campaign 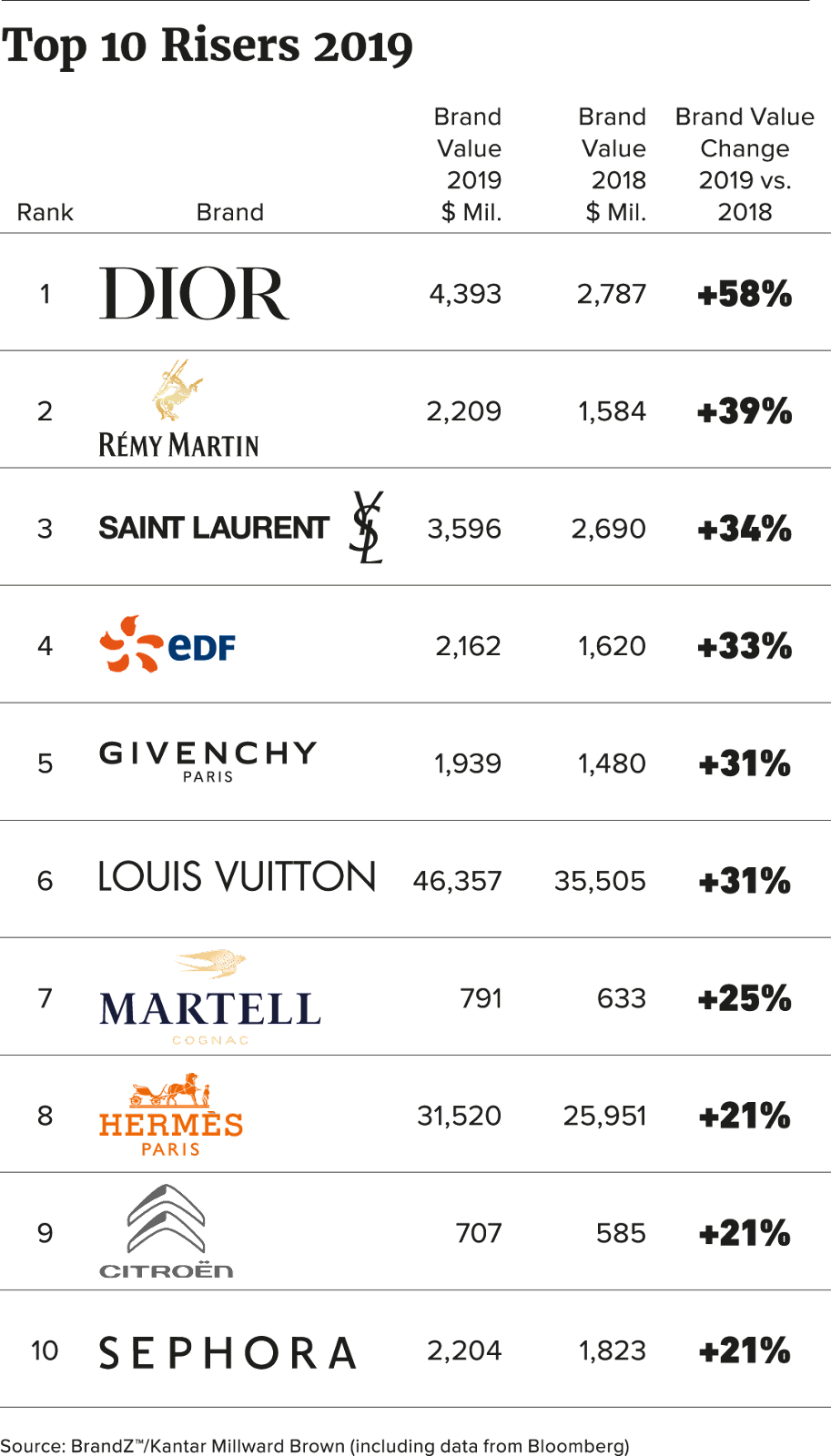 The six new entrants to the ranking this year are from five categories, all of which already have a strong showing in the French Top 50. What differentiates the new arrivals from the brands they have replaced is their brand health; the new brands are 6 percent healthier than those whose places they have taken. 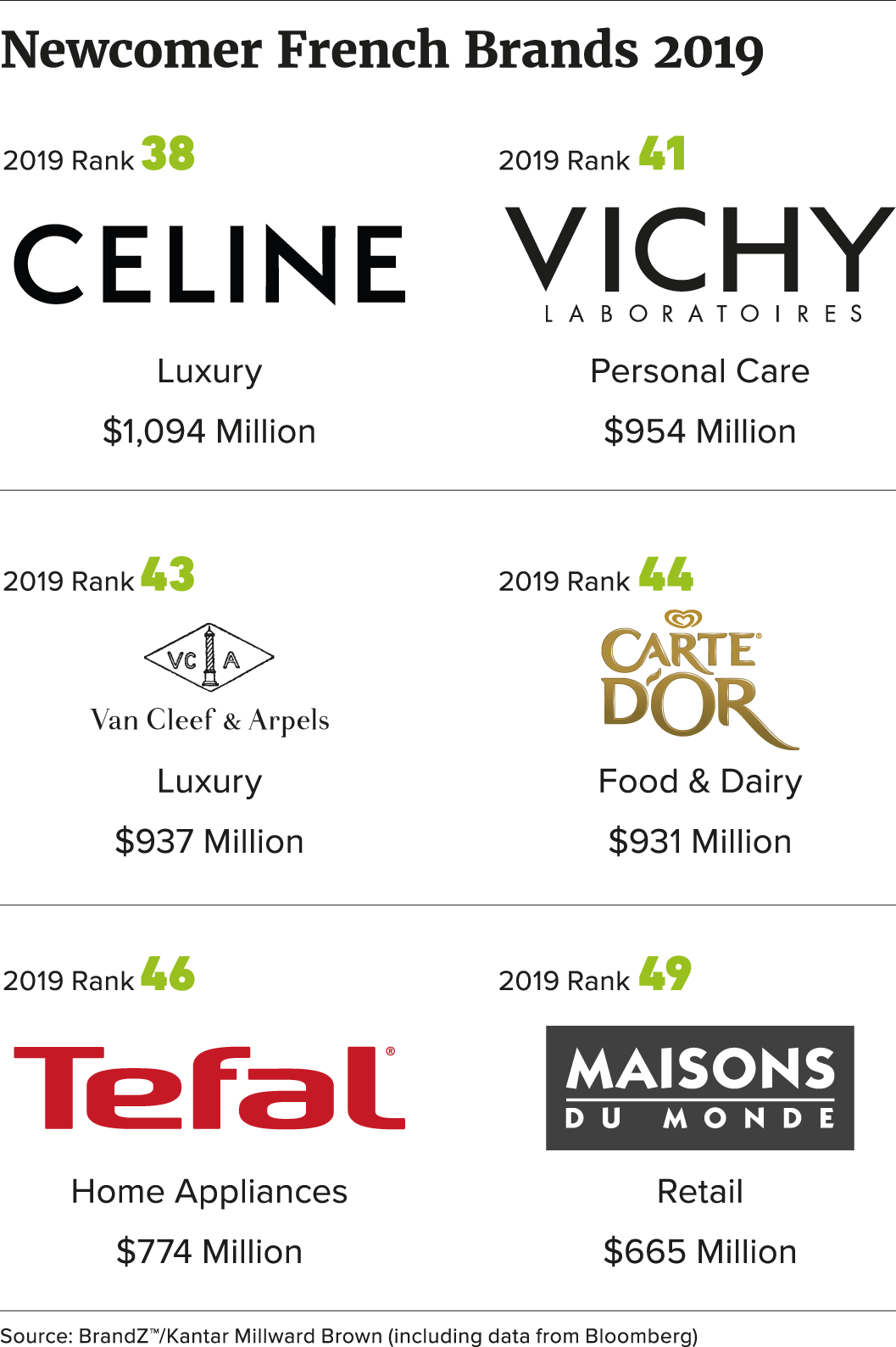 Two brands with similar financial scale can therefore find themselves in quite different positions in the ranking. This is because there is a difference in the proportion of their intangible value that is brand driven, rather than market driven. That is, they each have a different “power in the mind” of consumers, and this can propel them up or down the Top 50.

In the French Top 50, the power in the mind is very different for different brands. Veuve Clicquot, for example, which ranks 29th this year, has a brand contribution score of five out of five. This means a high proportion of its intangible value is driven by the brand, and it supercharges the brand, so it achieves a brand value of $1.8billion.

Société Générale, meanwhile, has an almost identical brand value, and is in 30th position in the 2019 rankings. But Soc-Gen has a lower brand contribution score – two out of five – because it is more dependent on operational aspects and presence of its real estate for its prominence in the market, whereas Veuve Clicquot’s brand is the biggest source of value.

High valuations also help insulate a brand against decline when times are tough. In challenging times, strong brands tend to be more resistant to a downturn and, when market conditions pick up, they recover faster than the competition.

Seven of the Top 10 brands in the 2019 French ranking have high brand contribution scores – that is a score of four or five out of five.

But many of the other top scorers – those that have the greatest proportion of their value driven by their “power in the mind” are from lower down the ranking. These include Carte d’Or and La Roche Posay, and a range of other personal care and alcohol names – brands that have made themselves part of consumers’ everyday lives .

The intelligent revolution on our doorstep