Budgets on hold – but not forever

Budgets on hold – but not forever

At the start of this year, the UK was on track for a seventh consecutive year of growth in advertising investment, but we know what they say about the best-laid plans.

The sudden shift that followed, from “business as usual” to an entirely new take on daily life, led to huge shifts in what people watched, read, listened to and created for themselves – and the knock-on effects for advertisers were immense.

Not only were brands suddenly faced with uncertainty over budgets, an inability to meet demand in some categories, and a ban on even opening for business in other sectors due to COVID-19, they were also challenged by a massive shift in consumer sentiment that meant some of their existing creative just wasn’t suitable any more. And simply making something fresh was suddenly a route littered with practical obstacles due to restrictions on movement.

The result was vastly reduced spending by advertisers in the first part of the year. The World Federation of Advertisers found in April, for instance, that 89 percent of multinational brands had put campaigns on ice, and just over half planned to hold back their ad spending for at least six months.

While around two-thirds were running campaigns that responded to the COVID-19 crisis, the level of spending on this kind of reactive advertising did not make up for the deeper cuts being made to other campaigns.

Consumers were making changes to their media habits on a similar scale. Kantar Media research, released when the virus was near its UK peak and all-but-essential workers were in lockdown, shows demand for online video and TV shot up as many people took enforced breaks from work – or at least work outside the home – and as schools closed.

In the last week of March, for instance, TV viewing in the UK was 29 percent higher than the same week in 2019.

TV news was a huge draw as people sought information – and in many cases something to help pass the time. Daily 1pm news bulletins started pulling audiences close to 60 percent higher than normal, with 6pm updates viewed by 28 percent more people than usual.

The Prime Minister’s statement on COVID-19 on March 23 had the nation on the edge of their sofas, and was viewed by 28.2 million people. Just a few weeks later, 24.3 million watched the Queen’s address to the nation. To put those figures in context, 24.5 million watched the London 2012 Olympic Games opening ceremony.

But it wasn’t just news that was drawing Brits to their TVs. Demand for films, series and chat shows also shot up.

With more people at home on weekdays than usual, the male audience for ITV’s “This Morning” shot up, accounting for nearly a third of all viewers (up from the usual 19 percent).

Netflix subscriptions soared not just in the UK but around the world, with series like Tiger King becoming a national talking point. Between January and March, Netflix signed an extra 15.8 million paying customers – more than double the number it had expected to recruit in that period. And the new kids’ streaming service Disney Plus launched in the UK at what turned out to be just the right time, following the closure of schools in late March.

Speeding up the inevitable

Jane Ostler, Global Head of Media at Kantar Insights, says the changes in consumer behaviour brought about by COVID-19 in many ways simply accelerated trends that were already taking place.

Daytime TV viewing is likely to drop somewhat once people return to work in significant numbers, but TV, VoD, and streaming have proved their relevance. Other shifts are likely to stick, and even gather pace.

“The continuing decline of newspapers has been exacerbated by this crisis, while other channels have been temporarily disrupted,” she said.

“Obviously, with cinemas shut, cinema advertising has suffered. There are long lead times on recovery because production has also been disrupted, and places where large groups of people gather will be the last to return to normal. Out of Home has been disrupted but should also recover as people start to move around again.

“Some channels that were growing anyway have been given an extra boost. TikTok and Snapchat have come into their own during this crisis - platforms that encourage user-generated content and allow individuals to feel like they can be creative have found new relevance.

“Instagram is being used more live, as a broadcast medium, by people doing a live cook-along with friends or live-streaming yoga and meditation. It’s not just celebrities and influencers, it’s also regular consumers.

“These channels are not just being used by younger people, but also by Millennials, who’ve had time on their hands and frustration has released new forms of creativity. We’re all finding new angles to our personalities and expressing ourselves in different ways, and brands are going to have to keep up.

“It’s a really mixed picture as consumption has increased but adspend has declined. Many media channels and media brands will recover commercially from this disruption, while others will continue to struggle”.

GroupM’s This Year Next Year 2020 update forecasts that the overall advertising market in the UK will decline by 13 percent, followed by a 13 percent rebound next year. That compares to a 12 decline as a result of the 2009 global financial crisis.

This forecast assumes that a COVID-19 vaccine will be available in the first half of 2021, and that all of the activities that were either impossible or difficult to take part in with social distancing – travel, dining out and mass gatherings – will return in some form during next year.

The interruption to normal life has presented brands with enormous practical challenges. Planning and setting up for Christmas TV ads, for example, usually takes place in the summer. But with no option to travel to northern climes to create wintry scenes, the pressure will be on to come up with ideas that say “Christmas” in new ways.

The right thing to say

It’s widely understood now that if brands simply turn off the taps on their communications when times get tough, they stand to exacerbate their suffering.

Or, to put it another way, those brands that work at maintaining a relationship with people, and adapt what they talk about in accordance with consumers’ changing needs and sentiment, can lessen the impact of a crisis and put themselves in a strong position to grow when better times return.

Kantar research shows that when a brand stops advertising on TV, for instance, after six months their total brand communications awareness levels are 39 percent lower, with a knock-on effect on consideration and purchase.

But understanding this and being able to put it into practice are not quite the same thing. The WFA study of its members found that while 62 percent of brands knew it was essential to avoid “going dark” during the COVID-19 crisis, they were still making big cuts to overall ad spending.

And there’s more to brands “not going dark” than simply keeping on saying what they would have said pre-crisis.

Research as part of Kantar’s COVID-19 Barometer study showed most people wanted acknowledgement that things were different, even if advertising did not overtly address the crisis. And, crucially, people did not want to see brands appearing to exploit the crisis for their own gains.

Consumers wanted brands to be reassuring, offer a positive perspective, and show how they could be helpful as a part of people’s new everyday lives.

“It’s been a huge challenge for advertisers and agencies to know what copy to run where”, says Jane Ostler. “You don’t need to refer directly to coronavirus, and you need to maintain your tone of voice and be consistent, but you also need to be sensitive to what’s happening”.

Persil has for years encouraged kids to enjoy getting dirty outside, and during lockdown switched its focus to the value of indoor play – sensitive and appropriate, but not a huge departure from its usual communications.

Innocent smoothies, meanwhile, which tends to be a little cheeky, ran a range of fun social media activities including a daily reminder on Twitter of what day it is, for those people losing track of time. 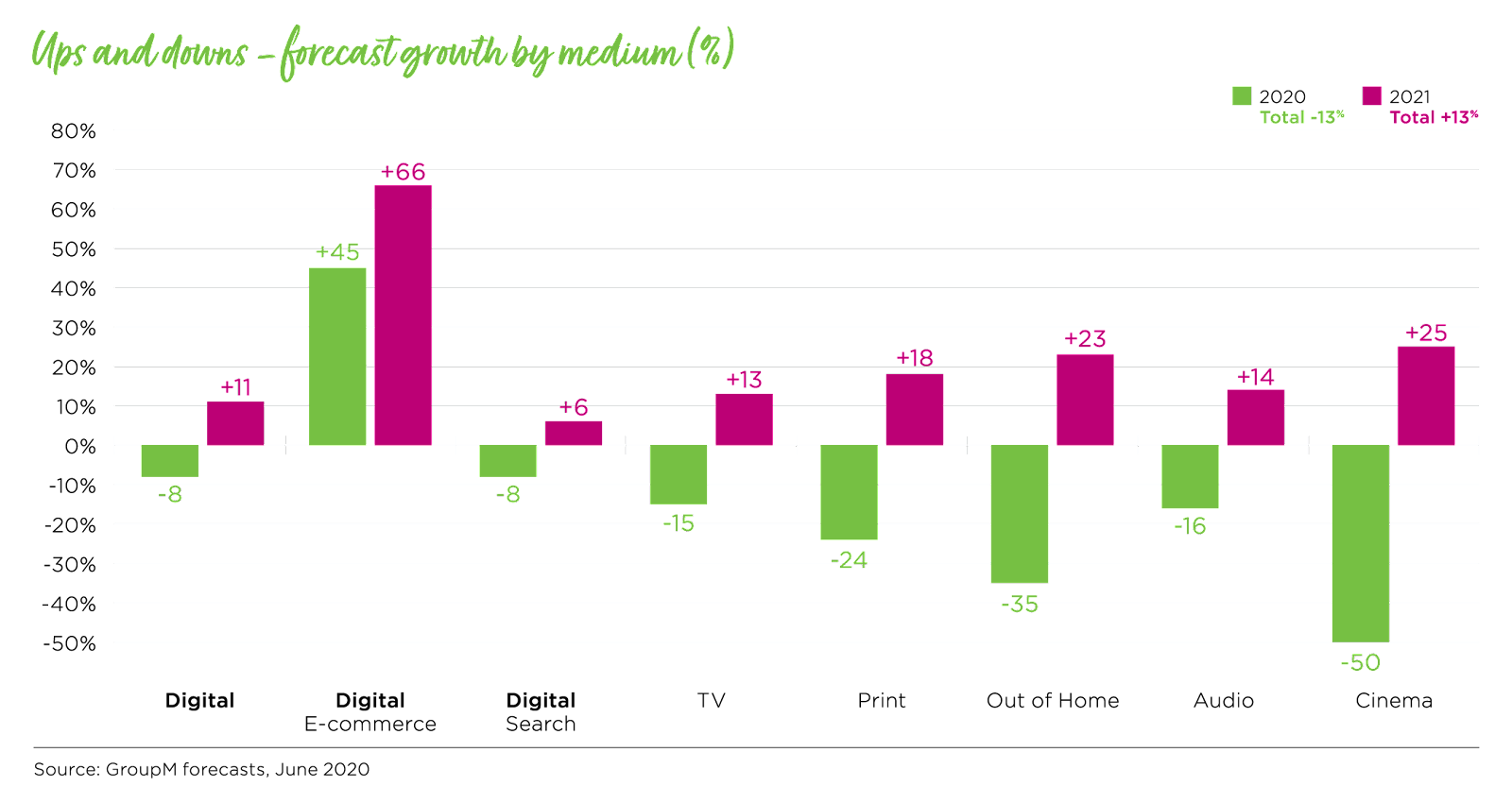 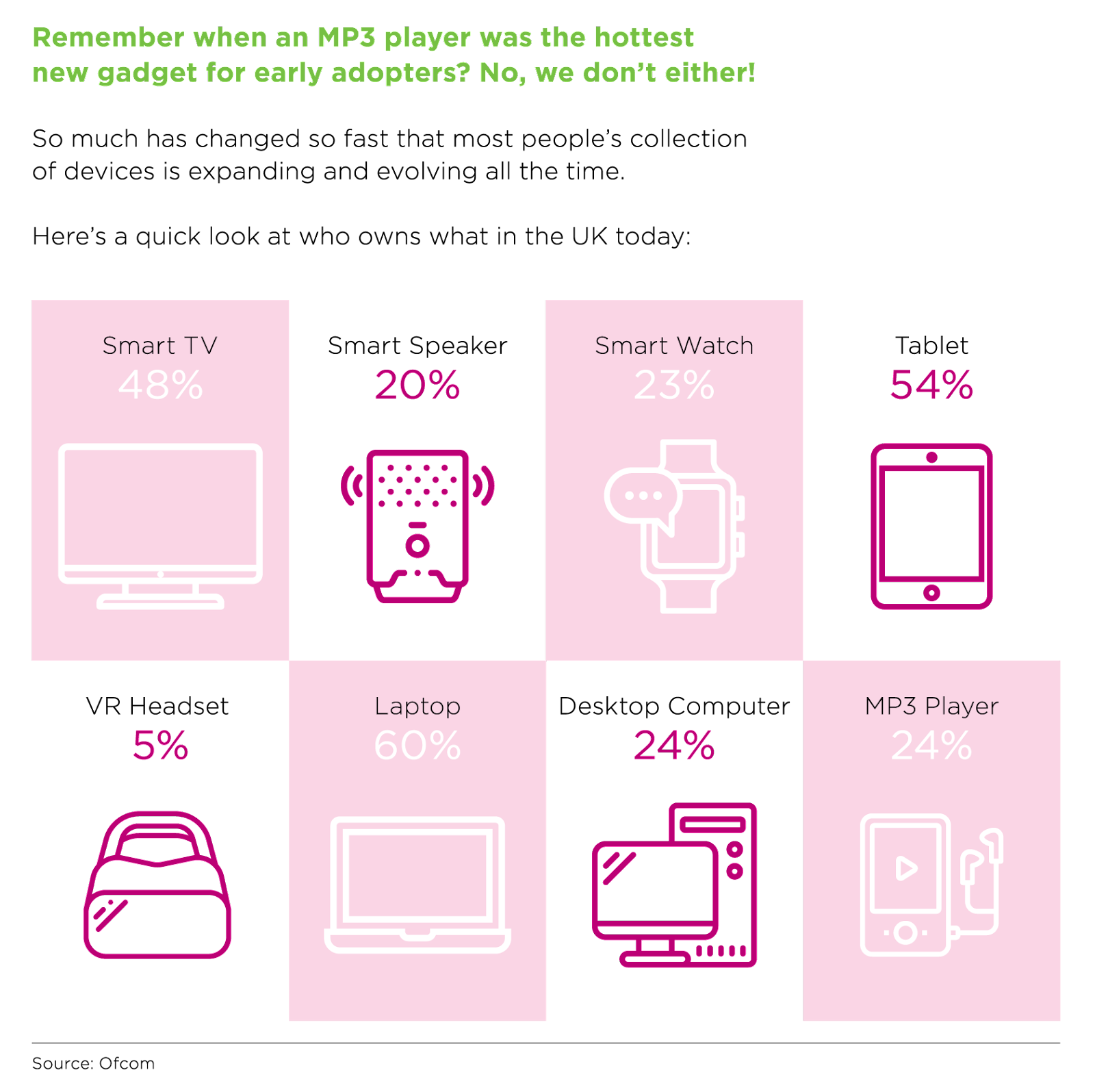 Coming up after the break … it’s consumer trust!

Social media might be where the excitement’s at, but consumers say TV ads create more of a positive image of brands than digital communications.

The issue, it seems is more about perceptions around the use of people’s personal data online rather than TV being inherently more trustworthy. More than a third of people feel digital ads are too intrusive, and 56 percent say they want greater control over their personal information.

With term-time interrupted, for many UK households, it’s been a case of: school’s out, screens are on, as parents have juggled working from home with trying to keep their children amused or studying.

But even before the extra screen time brought about by lockdown, more UK parents than ever before were worried about the risk of their children’s online engagement.

Ofcom research released just ahead of the virus outbreak found that parents were trusting their kids with their own smartphones at a younger age, but they were keenly aware of the risks of them encountering distressing content, being bullied, or feeling under pressure to buy items within games.

Between age nine and 10, the proportion of children who own a smartphone doubles from 23 to 50 percent – giving them greater digital autonomy as they prepare to move to secondary school. By the time they are 15, almost all (94 percent) children have one.

But despite giving their children access to digital platforms and having concerns, 55 percent believe the benefits of their child being online outweigh the risks than five years ago (down from 65 percent in 2015).