Category center of gravity moves to the East

This is the year car brands plan to drive consumer interest in electric vehicles. However, hybrids will prevail for an interim period, while long production cycles, the lack of charging infrastructure, and insufficient battery supply delay the transition to electric. Because of industry disruption and the impact of trade tensions on auto stocks, eight of BrandZ™ Car Top 10 lost value, and the Top 10 declined 7 percent overall, following a 7 percent rise a year ago.

Car brands were particularly hurt by the 4.1 percent drop in passenger car sales in China. The decline, reported by the China Association of Automobile Manufacturers, was the first in over two decades. In the US, car sales rose less than 1 percent. European sales, also flat, were impacted by new emissions regulations. Meanwhile, as carmakers grappled with the evolution from metal bangers to mobility providers, they manufactured SUVs, the cars that consumers worldwide demanded, even from super premium brands.

Loaded with technology, cars increasingly prepared to become another connected device ready for the Internet of Things. Amazon introduced a version Alexa for cars. And digital superiority was fast becoming a determinative factor for brand success. Even as Tesla struggled to meet production goals and the $35,000 price tag for its Model 3, another non-car brand, Dyson, the household appliance maker, prepared to develop electric vehicles.

And as brand experience became about in-car entertainment as well as horsepower, cars makers partnered with technology brands and worked to digitize much of the buying process. To restructure production and reallocate funds for investment in electric vehicles, several carmakers announced major labor cutbacks.

The car category has struggled since the global recession over a decade ago and has declined 5 percent in value over past 13 years, according to BrandZ™ research. Meanwhile, the category’s center of gravity is moving to the East, where the demand is greatest and Chinese brands prepare to export their first models to Europe and North America.

The road to electric

However, in Europe electric car models mostly came from premium brands, like Audi and Jaguar-Land Rover, or makers of small urban cars. Few fully-electric cars were available at the mid-range, a gap that exists as an opportunity for car brands. VW, for example, introduced the fully-electric e-Golf model.

Without many electric options in most markets, consumers motivated to buy a car with minimal environmental impact were more likely to choose a hybrid. While hybrids can be built by adapting existing models, a fully-electric car requires a purpose-built chaise designed to accommodate enough battery power without compromising passenger or cargo space. That takes time which, along with inadequate charging infrastructure and a shortage of batteries, slowed electric car growth.

In the context of these disruptive trends, companies tried to reinforce their brands. In its first global campaign, Toyota ran seven ads during the Olympics and Paralympics. The ads proclaimed Toyota’s leadership in the mobility business with a campaign about how, with freedom of movement, anything is possible.

Volkswagen stock strengthened as the company continued to transform, following its 2015 emissions scandal. Although Volkswagen has recovered some value, it remains below its peak. The erosion of consumer trust in the brand has leveled in some markets, like China, but it remains depressed in the US and other key markets, according to BrandZ™ research.

Volkswagen committed heavily to a future of electric vehicles with plans to introduce 70 electric models of VW and the company’s other brands, including Audi, Bentley, Lamborghini, and Porsche. The luxury end of the market remained robust. Mercedes and BMW maintained their strength in North America and China, but the new emissions regulations affected sales in Europe. Audi was particularly affected in Europe, but sales soared in China.

The super luxury segment performed especially well, in part because brands like Rolls Royce, Bentley, Lamborghini, and Maserati offered SUV models popular with consumers. Ferrari announced plans to introduce an SUV. Under its Lagonda badge, Aston Martin is developing an SUV that will produce zero emissions, and feature interiors decorated with materials not derived from animals, which is significant in a segment of the car category where leather seats signify premium.

Based on the Tesla approach to selling cars both online and at physical locations, brands attempted to improve the purchase experience. A few brands have experimented with exhibiting a limited number of cars in city centers where space is limited and expensive, while keeping test drives and purchasing at traditional out-of-town locations.

Ford has a store with a limited range of cars in a shopping mall. Cars parked in the mall’s garage are available for test drives. Other brands, including Tesla, Hyundai, and BMW have also experimented with mall locations.

In the US, with many e-commerce platforms, consumers do most of their research online before visiting a dealer to sign papers and pick up the car. Some European brands have fragmented the functions that had been unified at a dealership, including showing the new cars, selling them, offering insurance, and providing after-sales service.

Some functions are moving away from the dealer in China as well. For example, Ford and Alibaba have set up locations with cars located in enormous robotic garages that operate like vending machines for cars. Consumers can gain access to a car using their Alipay facial recognition and take a test drive. In an effort to streamline their operations, some of the newer brands in China, like Lynk, have avoided creating vast dealer networks by partnering with auto after-care companies.

Ownership and other options

Digitalization may also change the way cars are purchased, enabling a subscription model similar to the way smartphones are sold, with basic features enhanced over time with added apps. Car makers are exploring the possibility of loading cars with potential technologies that become activated when the driver purchases a subscription.

This approach potentially addresses some of the problems inherent in long-term purchasing cycles and keeps people engaged with the brand. It also raises the possibility of price resistance from people who do not want to pay for technology that they may never use. The situation may move the category toward an expanded role for car leasing.

The shift to leasing would change the perceived value of a car. With a purchase, there is a relatively clear relationship between the car’s price and its features. With complex leasing schemes, which can include a deposit, monthly payments, and a resale value, the price-value relationship is opaquer.

Purchasing cycles will change as more people lease or share cars rather than purchase them. Attitudes about ownership will vary by geographic location, with options other than ownership being more prevalent in cities. Social status will remain part of the consumers relationship with cars. In some instances, ownership will confer status; in other places status will come from the social responsibility creds earned from not owning a car.

As attitudes about mobility change, or fragment according to consumer geographic location and needs, brand communications will need to be more tailored. People living in cities will be more receptive to other mobility alternatives like car sharing, while in rural areas people are more likely to own their vehicles. These distinctions are happening and will accelerate. Understanding them is critical to brand building.

Gaining and sustaining loyalty, always a challenge, potentially will become an even greater challenge as leasing becomes more prevalent and consumers see lease arrangement as an opportunity to try many brands rather than to remain loyal to one brand. Historically, people leak out of a brand after bad experiences. Brands will not have the luxury of allowing that to happen going forward. Brands need to coordinate all aspect of technology to keep customers in the brand.

Many consumers do not realize they are driving a connected car. Others relate to the cars as they do to their cell phones, using only a fraction of the possibilities created by data. Brands have an opportunity to do much more analysis of that data in ways that can serve customers and build brand loyalty. For example, analysis of driving patterns can lead to predictive maintenance suggestions. Ongoing engagement with the consumer also can involve sales of software.

Distribution options are expanding with more direct-to-consumer possibilities, especially with electric cars. One possibility for keeping dealers relevant would be to improve the customer experience by modifying the dealer compensation model, which is based on sales volume, the number of vehicles sold. Incentivizing dealers to provide great customer service should improve the customer experience and, ultimately, produce the desired result—more sales. 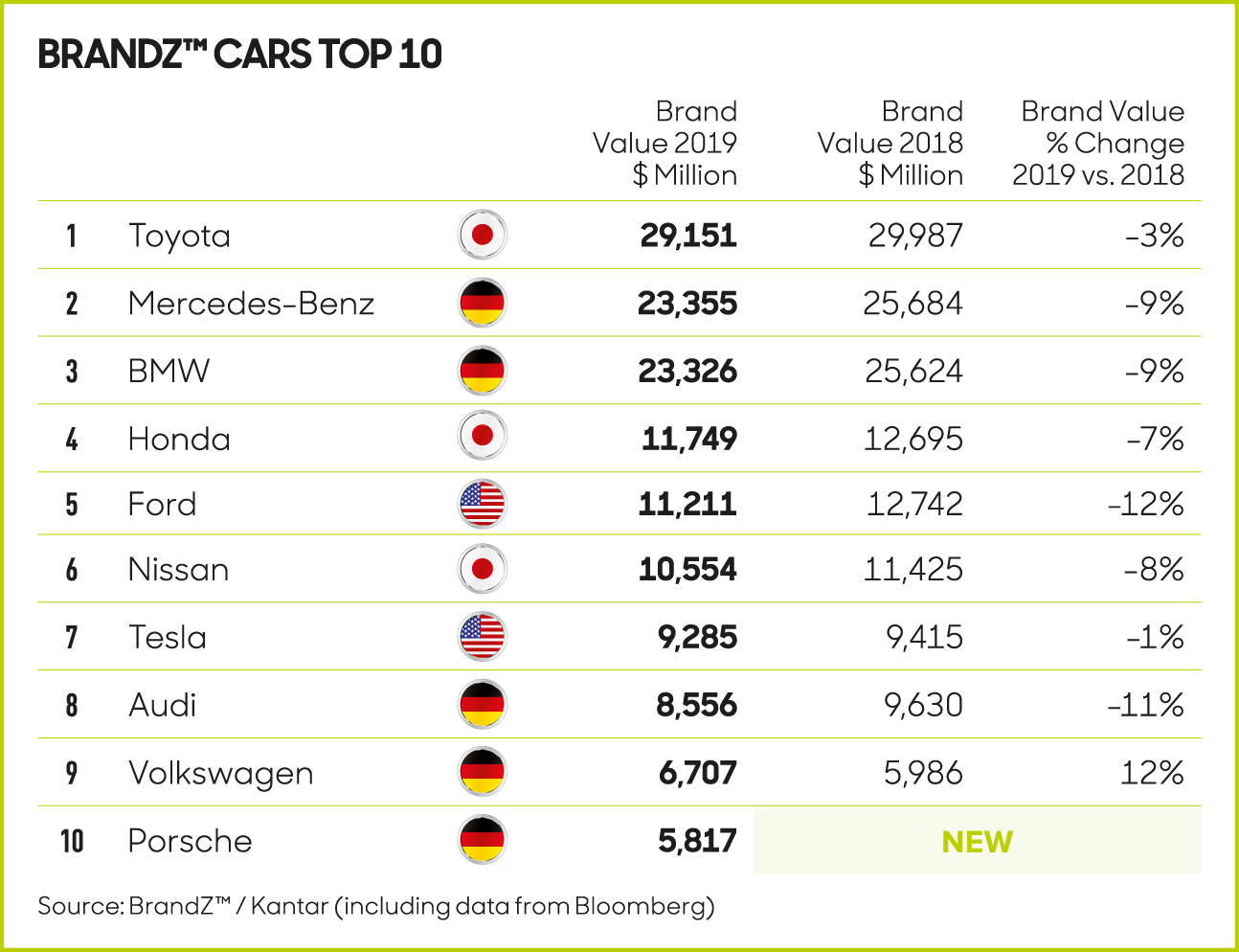 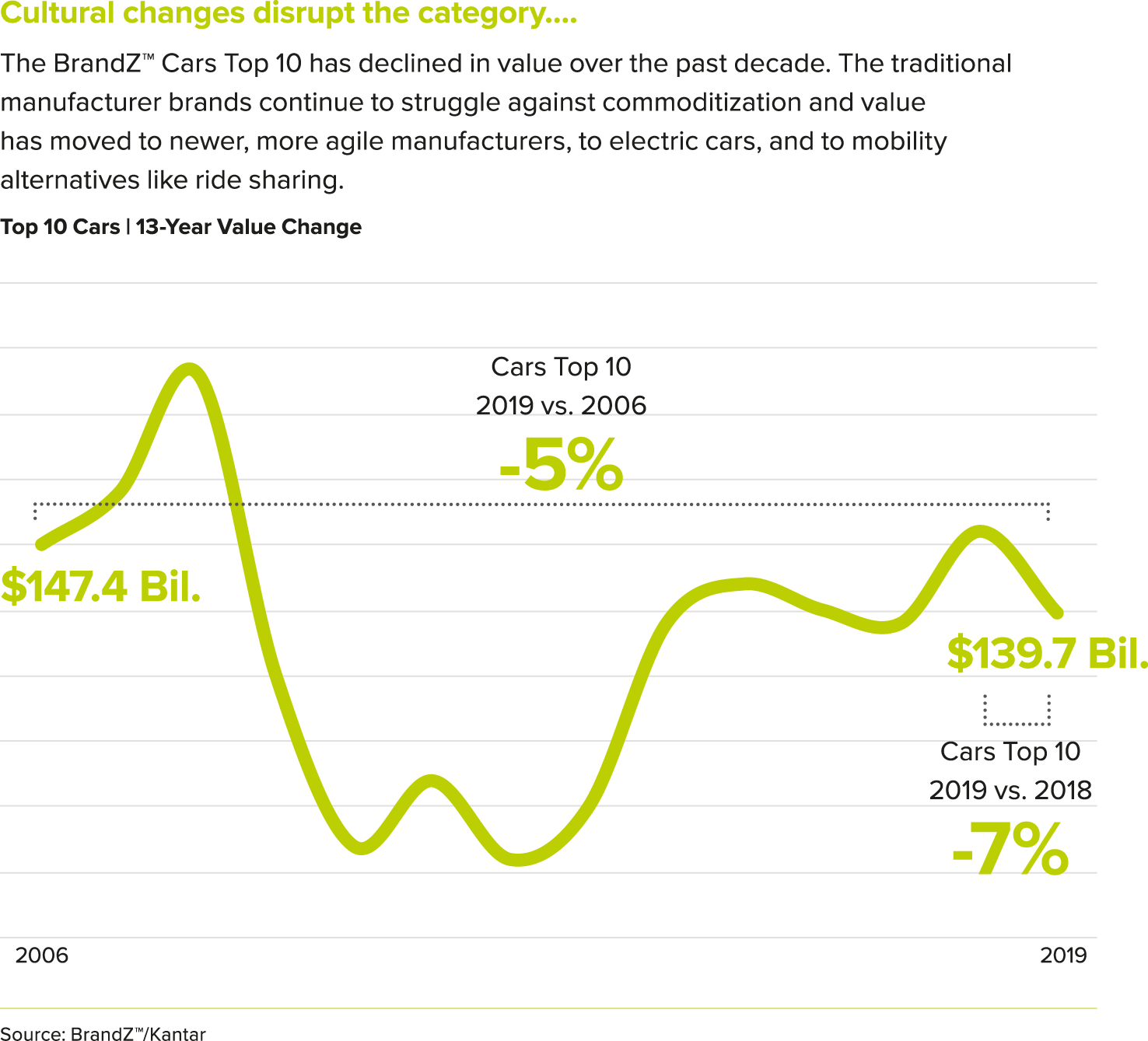 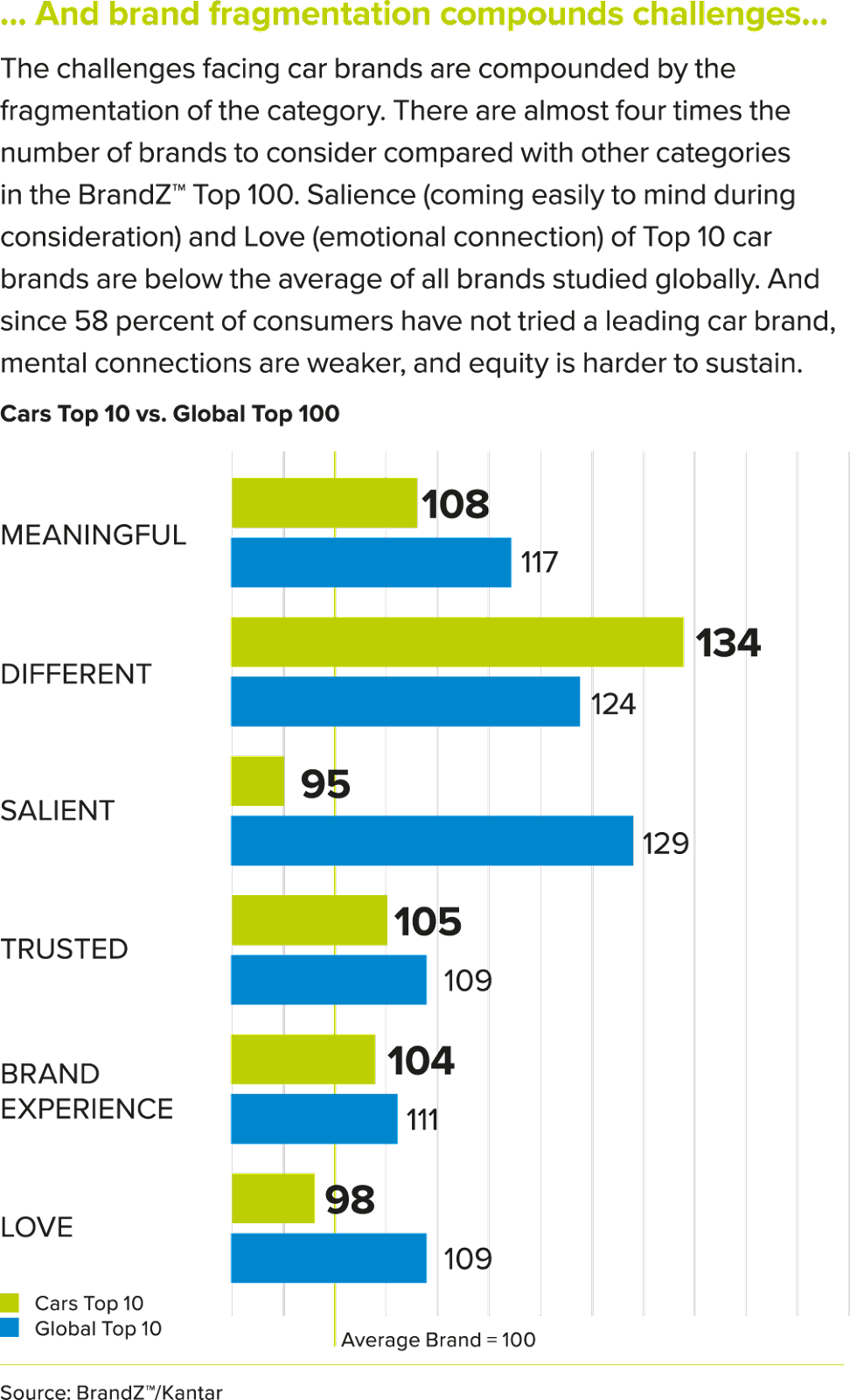 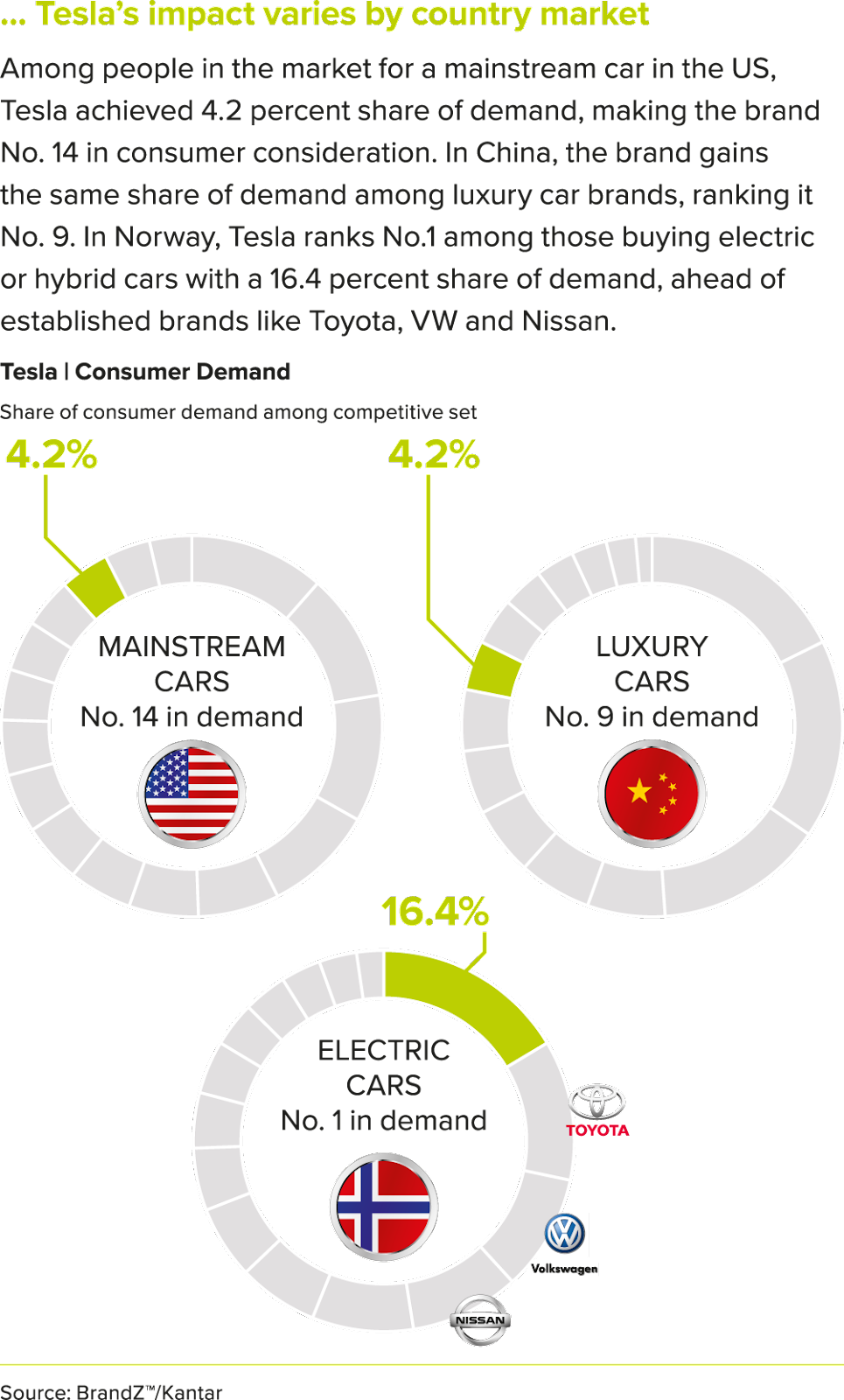