but pace of growth slows

Brands build for today and prepare for tomorrow

After no increase in value a year ago, the car category rose 7 percent, on the strength of SUV sales and luxury brands. Sales increased in most regions of the industrialized world, but at a slower rate, even in China. Safer, and more technologically advanced than ever, cars required less frequent replacement. Changing attitudes about ownership and more mobility options, especially in urban areas, also affected purchasing.

Although carmakers in China sold over 10 million cars for the second consecutive year, the rate of growth slowed. In the US, actual unit sales declined for the first time in seven years, to 17.2 million, it could have been a sharper decline except that hurricanes in the US drove a high level of replacement sales. The rate of growth also slowed in the EU, but sales increased for the fourth consecutive year, to 15.6 million.

Despite expressed consumer concerns about climate change, SUVs of all sizes drove sales across most markets, primarily because these models make drivers feel safe and powerful. SUV volume in Europe grew about 20 percent. And contrary to the conventional wisdom that younger people are less interested in cars or driving, in markets like the UK, where housing prices limit early home ownership, cars are a more affordable big-ticket purchase.

Mass imitated luxury in car technology, and luxury imitated mass in car model variations, with SUVs and hatchbacks. Most of the luxury brands offered entry models, on-ramps to the brand for younger drivers who want the badge but cannot yet afford the full luxury sticker price. These models narrowed the price gap between entry-level luxury and fully-loaded mass. By making their products accessible, and adding a luxury badge, luxury car makers drove extra volume and still commanded a price premium. 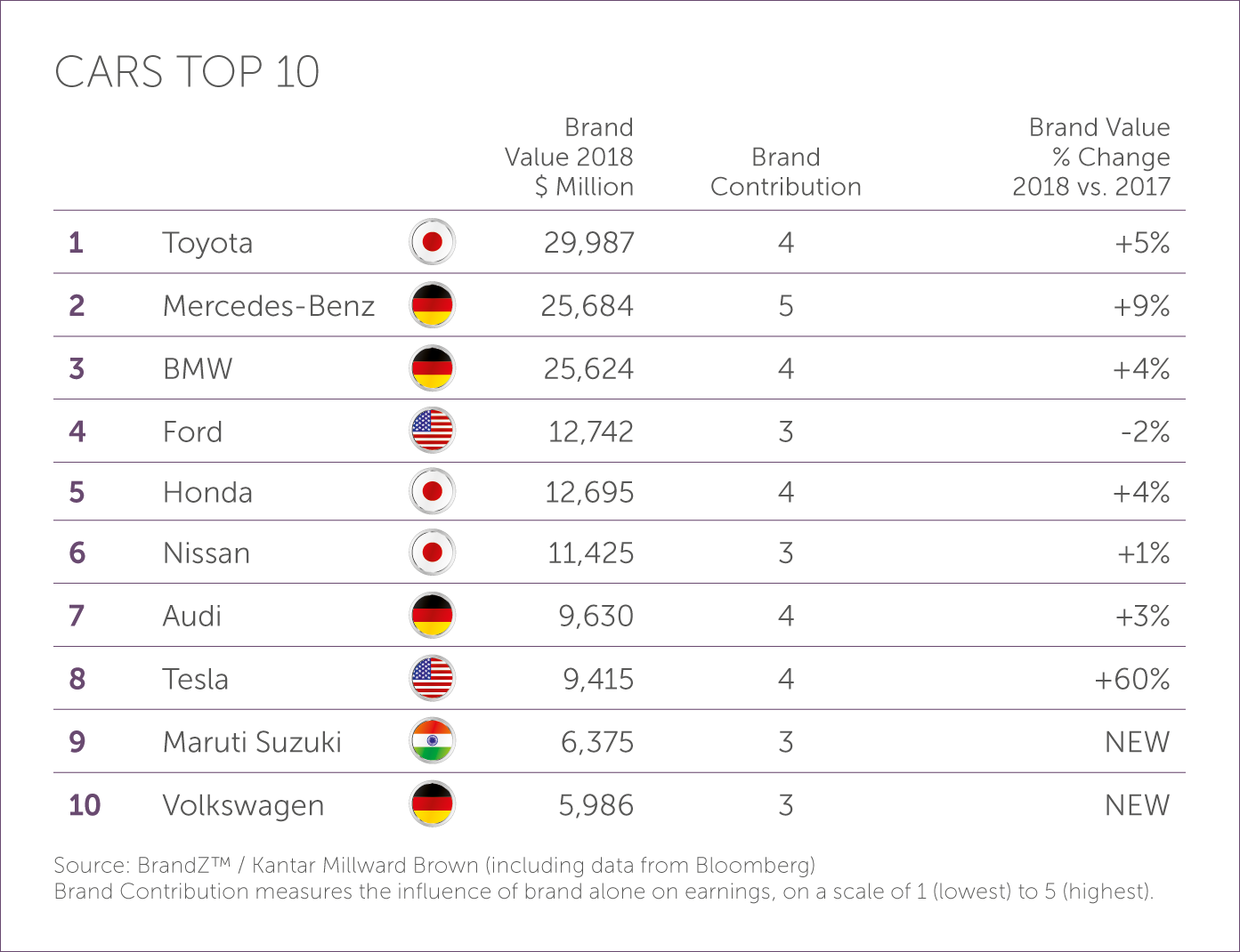 On the strength of a new luxury model, Maruti Suzuki, an Indian car brand, entered the BrandZ™ Cars Top 10. And several Chinese brands announced export ambitions. Great Wall plans to introduce its Wey SUV to North America in 2021. Geely is considering launching its new Lynk brand in Europe, in cooperation with Volvo, which it owns. Geely acquired a stake in Daimler, maker of Mercedez-Benz.

Mercedes-Benz sold more cars than BMW worldwide. In its redesign and messaging, Mercedes effectively reached younger car buyers. Its campaign, titled “Grow Up,” featured rapper A$AP Rocky. BMW continued to make cars that people want to drive, which was reflected especially in strong sales in China, although sales declined in the US, where the brand faced fierce competition from other SUV makers. The brand effectively advertised its accessibility in its price messaging about cost per month.

Audi launched the Q2, a smaller SUV. While stretching down, Audi messaging emphasized brand rather than functionality. Audi has been shifting the center of brand gravity down for several years. It has sustained the brand with sophisticated communication, and the brand enjoyed success, particularly with strong demand in the US. In China, Audi is repositioning to a lifestyle car from a car that had been favored by the government for its fleets.

The rise of Tesla, which increased 60 percent in brand value, following a 32 percent rise a year ago, reflects the fascination with a technology brand that is also in the space travel business, and the sense of potential as more affordable Tesla’s enter the market, although the introduction of the Model 3 encountered production problems that hurt the share price.

Maruti Suzuki continued to outpace the growth of the Indian car market because it created network of premium dealerships selling an affordable luxury model called Nexa, which met the aspirations of the rising middle class, particularly young people. To appeal to younger customers Maruti also enhanced digital aspects of its sales and service for both premium and mid-market models.

Strength in the middle

The Toyota Camry remained America’s No. 1 best-selling selling sedan, as its reputation for quality and reliability generated a high level of loyalty. The brand continued to dominate the hybrid market with its Prius, and it announced a joint venture with Panasonic to accelerate development of all-electric vehicles. Toyota again led the BrandZ™ Cars Top 10 ranking.

Ford continued to build trucks, like its F series, and SUVs, like its recently-released Rapture. It planned to discontinue some passenger car models, including the Taurus, which was the best-selling car in the US, in its day. Ford’s China sales slowed as the brand encountered more stronger competition from Chinese brands.

On the strength of its crossover and SUV models, Nissan sales increased worldwide. US sales continued to be strong but discounting hurt profits. The brand intends to control its incentive programs in the US and be more aggressive in China. Although SUVs and trucks drive the US market, Nissan sells more sedans. That is also the case with Honda, which introduced a new Accord, hoping to stimulate more sedan sales. US tax law changes benefited both Nissan and Honda, as well as other car companies.

Volkswagen stock declined after it booked the fines that followed fraudulent reporting of its diesel car emissions in the US, but US sales revived on the strength of the Volkswagen brand and the introduction of new models, including SUVs. Worldwide, Volkswagen recorded its best sales performance ever, with strong sales in most markets, especially China, and the brand reentered the BrandZ™ Cars Top 10.

As the world moves away from combustion engines and looks for ways to solve urban congestion, car makers, especially mid-market brands, are competing for leadership as mobility providers.

Ford invested in software to operate city transportation systems and it introduced its Chariot ride-sharing van in London, early in 2018, having launched the app-driven service in San Francisco two years earlier, and expanded to several other US cities.

Brands developed sharing programs that also work as brand marketing tools. Cadillac, Volvo, and Porsche offered subscription services the connect customers to the brands, providing a car model most appropriate for the occasion. Using a particular app to get around London, it was possible to hire a black cab—or a Porsche, exposing potential customers to the Porsche experience. BMW acquired Parkmobile, an app for booking and paying for parking spots.

Most of the brands developed plans for electric and autonomous vehicles. Toyota announced a major investment in autonomous cars, with the establishment of a separate company, Toyota Research Institute-Advanced Development. Ford invested in a startup called Argo AI to develop autonomous car technology. BYD, a Chinese brand, is already a major manufacturer of electric vehicles for personal and commercial use.

Ironically, as car brands shift to mass transportation, they potentially become more desirable, particularly at the luxury end, where scarcity and nostalgia drive interest in classic car models from the past. In some markets, Ford is bringing back the Mustang, for example. Reflecting the connection between cars and watches as objects for self-expression a Danish company produces watches from salvaged Ford Mustangs.

Most car brands continued to sell through extensive dealer networks, but Tesla sells direct, and other sales and distributions possibilities emerged in China, where Alibaba sells cars on its e-commerce site and, in partnership with Ford, introduced a car vending machine. In a strategic alliance with Ford, members of Alibaba’s Tmall can sign up for a car online and obtain it for a three-day test drive, using facial recognition to release a car from a giant vehicle vending machine, which operates like a robotic parking garage.