Over the past decade, retail, mobility, (cars and transport), and technology added value faster than any other category in the BrandZ™ China ranking. Retail grew 5,963 percent, mobility 848 percent, and technology 832 percent percent between 2011 and 2020, based on analysis of the BrandZ™ Top 50 during that period.

Since 2014, when the China ranking expanded from 50 to 100 brands, retail value has increased 5,950 percent, while the technology category growth rate moderated somewhat to 276 percent and other categories, including education and mobility (cars and transport),  and IoT Ecosystem Increased rapidly in value growth. The entertainment category was split from the technology category in 2019.

The rapid value growth of these categories and newer categories, like Internet of Things Ecosystem, contrasts with the much slower value growth of banks, telecom providers, and energy—categories typically dominated by State Owned Enterprises.

Retail and technology, in particular, triggered the transformation of Chinese consumer life and China’s brand landscape over the past decade, as a group of internet platforms and devise makers developed valuable brands that helped China leapfrog into the mobile digital age.

The powerful BAT triumvirate—Baidu, Alibaba, and Tencent—initially experienced rapid growth. In the BrandZ™ China 2015 ranking. Tencent almost doubled in value to replace China Mobile as China’s most valuable brand, and Alibaba, having completed its successful IPO, entered the China Top 100 for the first time, at No. 2.

In retail, challengers include e-commerce giants JD, which entered the BrandZ™ China Top 100 in 2016, and Pinduoduo, a newcomer in 2020. Several of the 2020 newcomers were Unicorns, including TikTok and Kuaishou. Ranked in the entertainment category, these brands conduct content commerce that competes with retail and technology internet brands.

Having grown value at extraordinary year-on-year rates—141 percent in 2015—value growth of the car category has slowed recently because of the economic slowdown, government regulations, and also the emergence of other mobility options. Didi Chuxing, the car hailing service, entered the BrandZ™ China Top 100 in 2019, with the addition the transport category.

Similarly, China’s intense housing development drove the sharp value growth of the home appliances category. Adjusting to fluctuations in the real estate market and consumer desire for well-designed, connected appliances, the category is shifting its focus, led by Haier, which is transforming into an Internet of Things Ecosystem.

In this turbulence, brand has been a sustaining factor across categories, as illustrated by the alcohol category. It declined 22 percent in the 2015 BrandZ™ China ranking, after the government policy limiting extravagance at government functions impacted the sale of premium drinks like baijiu, China’s traditional white alcohol. Following branding initiatives and efforts to widen the appeal of baijiu across more groups of people and drinking occasions, the alcohol category rebounded. 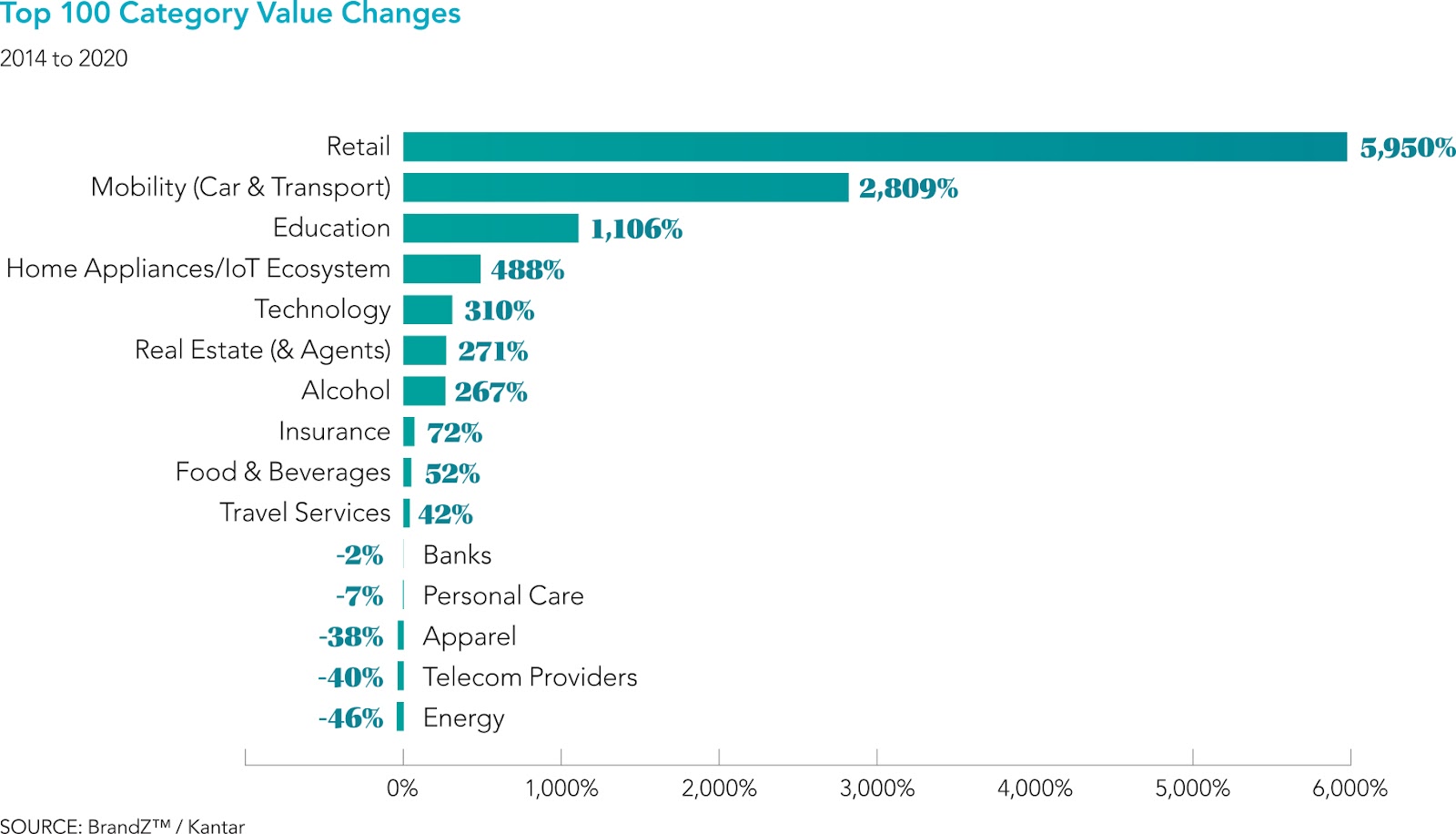