Many categories contributed to the exceptional 23 percent value rise of the 2018 BrandZ™ Top 100 Most Valuable Chinese Brands. Fifteen categories increased in value compared with 12 a year ago, and the rates of value growth were larger. Conversely, fewer categories declined in value and the declines were smaller. Logistics, a category added for the first time this year, also added to the growth rate and increased the number of categories examined in the report to 21.

With a 68 percent increase, education led the categories in value growth, followed by travel agencies with a value rise of 57 percent.  A year ago, education and travel tied for leadership with 46 percent increases. This repeat performance illustrates a fundamental cross-category trend—

the Chinese consumers’ willingness to spend disposable income on products and services that promise to enhance their lives, now and in the future.

Retail category growth resulted from effective brand building initiatives by Alibaba and JD.com, for example. Value growth of the alcohol category points to creative marking by Baijiu brands as they recovered from government restrictions on lavish spending. Alcohol value growth also reflects how brands of baijiu, beer, and wine adjusted to accommodate the growing consumer preference for premium products.

A middle group of categories experienced strong growth, with brand value increases of 12-to-21 percent. These categories include: insurance, technology, hotels, banks, and food and dairy. A combination of economic factors, consumer attitudes, and brand initiatives influenced the value changes. In food and dairy, for example, a shift to premiumization and growth in fast moving consumer goods (FMCG) e-commerce helped balance lower spending on basics.

Three categories increased modestly, by 5 percent or less: cars, airlines, and baby care. But certain brands in the car category did exceptionally well. Geely, which introduced a new, premium model that it also plans to export, increased 75 percent in brand value, making it one of the Top Risers. But Geely accounts for a relatively small share car category value. Three of the four airlines in the BrandZ™ China Top 100 rose in value. Baby care includes just one brand, a diaper maker that continued to face online price competition. But category value rose 3 percent, compared with a 25 percent decline a year ago.

Similarly, of the five categories that declined in value, compared with seven decliners a year ago, only one category—telecom providers—dropped by more than 10 percent. Jewelry Retailer declined 1 percent. A year ago, it suffered a 31 percent decline, the steepest decline of all the categories. Impacted by low global oil prices, the oil and gas category held steady, dropping 7 percent in value compared with 6 percent drop a year ago.

The apparel category is a barometer of the Chinese market’s volatility. Last year the category increased 35 percent in value and moved up near the top of the ranking, after decreasing 46percent a year earlier. This year, Apparel’s reversal of fortune was less extreme, but its decline of 5 percent placed the category toward the bottom in brand value change. One apparel brand dropped out of the ranking and the two remaining brands increased, but moderately.

Logistics, the category added to the BrandZ™ China Top 100 this year, reflects the rapid pace of change in China. Until recently, the courier service in china was a fragmented business served by delivery men riding bicycles. The rise of e-commerce increased package delivery volume, creating a space for larger brands to rationalize the category. Five logistics brands entered the BrandZ™ ranking this year. The largest, SF Express, ranks No. 11 in the BrandZ™ China Top 100.

The following articles describe in greater detail how brand marketing, economic forces, consumer attitudes, and competitive dynamics shaped the value changes of the 21 categories and 100 brands examined in the BrandZ™ Top 100 Most Valuable Chinese Brands report. 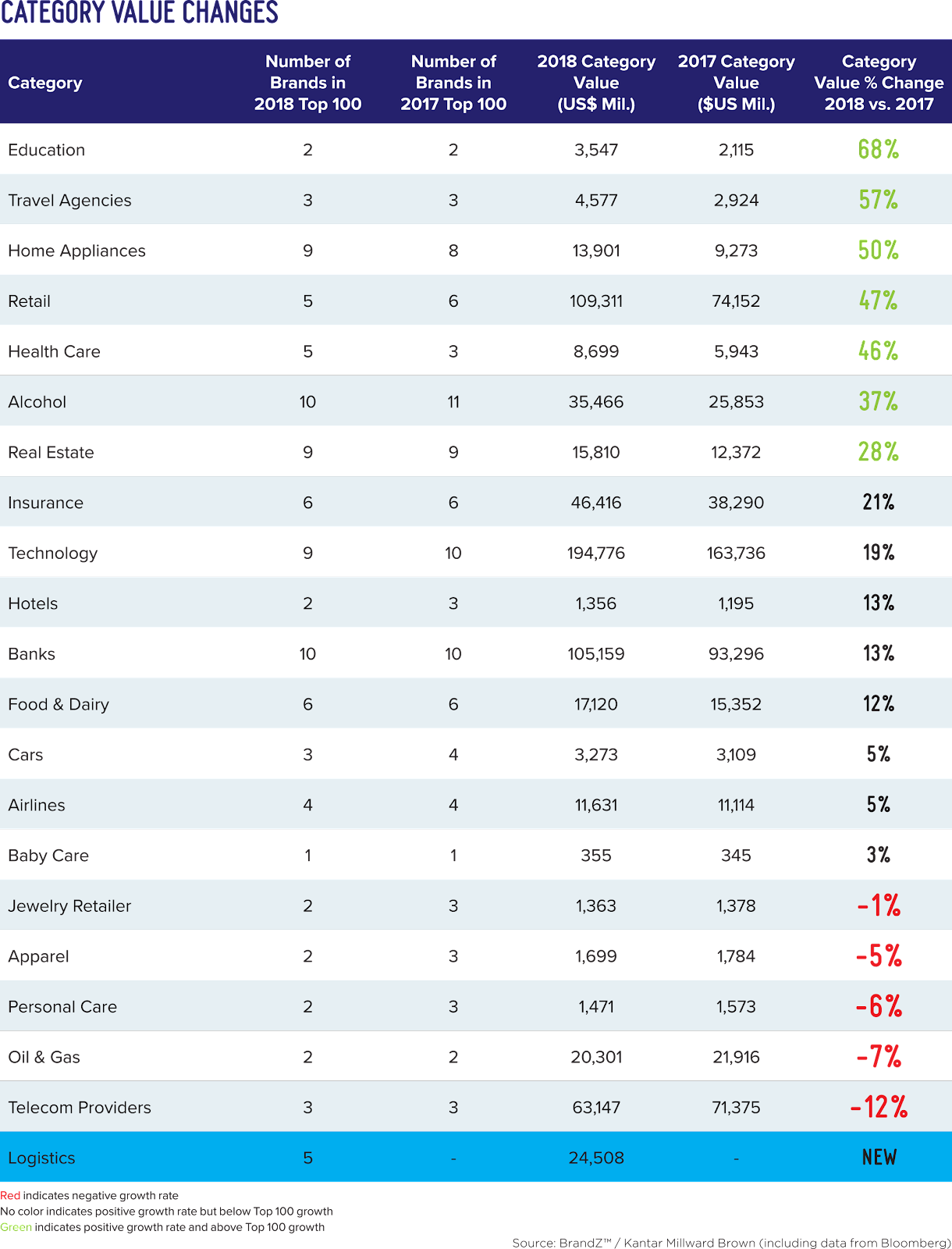