If it feels like the pace of life is speeding up all the time, here’s some reassurance: it’s not just you. Everything really is moving faster than before.

The number of next-generation fibre and broadband connections has now overtaken the number of old-style ADSL links, giving greater numbers of households access to super-fast internet. Outside the home, 4G mobile data coverage has become almost universal in the UL, and major cities are seeing even-faster 5G being rolled out.

The ubiquity of high-speed connectivity means that UK consumers are “always on”, and that’s not just changing not just the way they communicate with each other, but also the way they get (and create) news and entertainment.

The effect of this on the media landscape is utterly transformational. The average UK household now consumes around 190GB of broadband internet every month – that’s the equivalent of streaming more than six hours of Netflix every day.

Mobile data consumption comes on top of that, and individual consumers are spending well over half of their time online connecting from a mobile device, very often juggling several digital activities at once. Ofcom reports that under-35s frequently engage in at least five online activities while commuting. It’s no wonder that no one chats on public transport.

The “always on” approach to technology now means consumers are dividing their time across an ever-broadening range of media platforms and providers. The days of office water-cooler chat about the previous night’s TV have therefore largely become online discussions about the latest podcast or box set. There are few TV series that can still generate audiences of 8 million-plus; in fact, the number of programmes attracting those sorts of viewing figures has halved in three years.

The rise in digital video viewing means the average UK consumer watches YouTube for half an hour of viewing, and that’s in addition to online subscription video services such as Amazon Prime and Netflix. But TV remains strong, with over 90 percent of the population watching “regular” television every week. Drama and major sporting events deliver the biggest audiences for live TV.

So, while TV is holding its own, print is losing readers – and, as a result, advertisers. Magazines and newspapers are seeing year-on-year investment decline by 7.8 percent in the case of magazines, and 2.2 percent for national newspapers. Contrast this with 0.5 percent growth in television advertising forecast for this year, and 10.7 percent growth for digital – down on the pace of growth seen online over the past five years, but still well ahead of any other medium.

Internet advertising now accounts for 63.7 percent of all adspend in the UK; TV is a long way behind in second place, with 19.9 percent share.

GroupM analysis shows that advertisers are not just adjusting their media plans to account for evolving consumer preferences, they’re also dealing with yet another year of uncertainty over Brexit.

Despite that, advertising investment in 2018 remained strong and grew by 7.8 percent, well ahead of the growth in the wider economy. Spending in 2019 was looking on track to reach 6.1 percent, which would make this the 10th consecutive year of growth in what is the world’s fourth-largest advertising market. 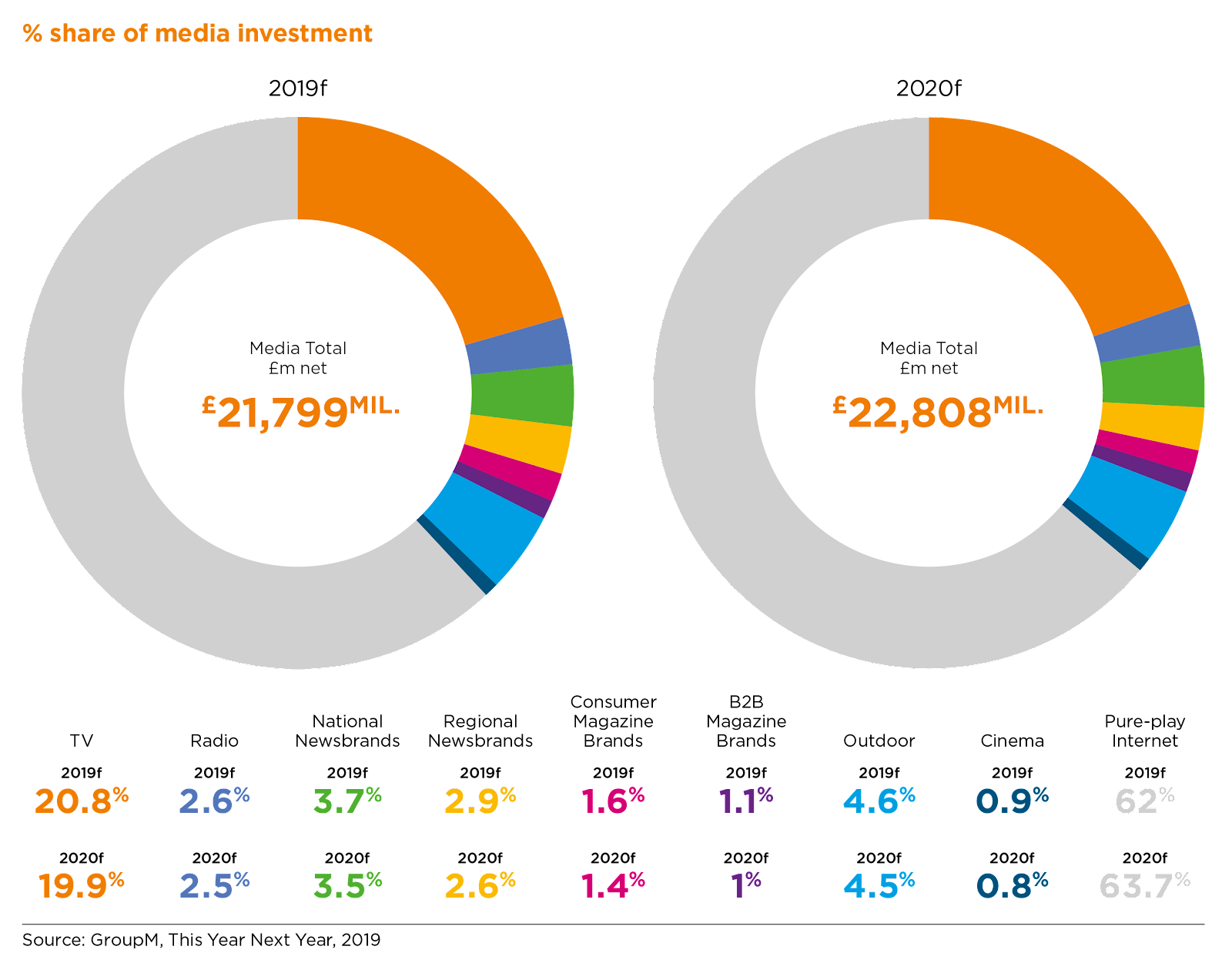 The gift that keeps on giving

One of the greatest tests for advertisers in the UK is to create high-impact, effective messaging around Christmas – just when every other brand is straining both budget and brain power to do exactly the same thing.

In 2018, that challenge was even greater than usual, against a backdrop of what we can diplomatically call “interesting times” that have dented consumer confidence and increased cynicism regarding big business.

Kantar’s annual study of the most high-profile Christmas-themed campaigns shines a spotlight on which brands had the deepest impact and why – and provides important lessons for advertisers on how to maintain the magic all year round.

It concludes that the best-received festive ads in 2018 were those consumers felt captured what Christmas should be about, which for many is simply families and friends coming together and having a good time. This is partly driven by the tough times we’re in, and the increased awareness of the need to live more sustainably. The bigger, more cinematic ads so often produced around Christmas offered a dose of escapism, but may have seemed out of touch. Ads need to tap into the cultural and social reality.

“But it’s not Christmas!” we hear you say. That’s true, but the right story, with genuine and positive meaning, can be successful at any time of the year.

** Iceland’s ad, using an animated orang-utan to talk about the effects of palm oil production was best received overall in the Kantar research. Consumers scored it top on 10 of the 12 factors, including “involvement”, “enjoyment”, “brand love”, “persuasion”, “being relevant” and being “different from others”. The retailer used Christmas to communicate a powerful message, wrapped up in a story that was beautifully told. It tapped into the spirit of the moment by choosing to talk about wider societal and environmental issues, and positioned Iceland as a leader on these issues.

**Amazon The return of the unmistakable singing parcels meant Amazon came out top for the second year running. Consumers found this engaging and persuasive, and loved the strong Christmas vibe. The use of a strong brand trigger leveraged the power of a simple idea and built affinity towards the brand.

** M&S Informal chats with families, friends and couples about their favourite M&S Food items at Christmas proved both engaging and persuasive – a winning combination. The products were the heroes, and the ad wove in a strong people story that consumers could really identify with: choosing your Christmas food faves.

3 Christmas presents … that you can use all year long

Smaller-scale, more relatable stories won through over epic blockbusters, with M&S, Morrisons, Tesco, Boots and Amazon performing effectively. While the

“big” ads, such as the John Lewis account of a young Elton John receiving his first piano as a Christmas present, told fabulous stories, they were not always relevant to consumers in more challenging times. Viewers often responded more strongly to simpler, more traditional ads that capture “real” scenarios.

2 GREAT STORIES MUST MAKE SENSE FOR THE BRAND

Emotionally powerful storytelling has become a Christmas staple, but that can come at a cost, as branding tends to be lower as advertisers focus on telling a story. More brands took a more product-led approach, with branding improving as a result, but the stronger performers, such as Boots, Morrisons and Amazon told a relatable, Christmassy story with a clear role for the brand.

3 POWERFUL STORIES AND RELEVANT MESSAGES WORK AT ANY TIME

The hugely positive response to Iceland’s “Rang-Tan” spot showed again how emotional storytelling can engage people and land a message for a brand. While not about Christmas, this used the creative conventions of Christmas advertising to communicate a deeper message about the brand’s beliefs, and Iceland reaped the rewards in goodwill.