Sales of fast moving consumer goods (FMCG) rose 3.6 percent for the third quarter of 2017, signaling the start of a recovery, according to Kantar Worldpanel. In addition, FMCG e-commerce sales grew over 24 percent during the same period, which increased the proportion of FMCG purchased through e-commerce to a still-small—but rapidly growing—7.4 percent.

Among the slower-growing food and beverages, some products sold well, specifically yogurt and bottled water, which command premium prices because they meet the Chinese consumer’s increasing concern about health and wellness. Conversely, geopolitics slowed the rapidly-growing personal care sector to a respectable, but disappointing, 8.3 percent value increase during the first half of 2017. Sales of popular Korean personal products slackened after China objected to South Korea’s deployment of a defensive missile system.

In addition, consumer shopping behavior changes continued to complicate FMCG sales. Purchase frequency declined for several reasons, including the rise in e-commerce for groceries and other consumer goods, and the corresponding cutback in trips to hypermarkets and supermarkets. And more people ate meals out-of-home or relied on home delivery.

These trends were consistent across China, with some regional variations, according to Kantar Worldpanel, which researches consumer spending in over 100 categories in Tier 1-to-Tier 5 cities. FMCG sales in western and southern China grew 6 percent and 4.2 percent, respectively, in the third quarter of 2017, exceeding the overall national improvement. Consumer purchasing power is increasing rapidly in these regions, which are experiencing robust economic growth as industries relocate manufacturing facilities from China’s coast to its the lower-cost interior.

The two-speed nature of China’s FMCG market, and the decline in shopping frequency, make gaining market share even more challenging than usual. Penetration is key, according to Kantar Worldpanel, and penetration varies widely by category. In toothpaste, where penetration is close to 100 percent marketers need to interest consumers in more premium product versions. In contrast, opportunities exist in categories with relatively low penetration, such as facial makeup, where penetration is 40-to-50 percent, compared with penetration of over 80 percent in Japan and Korea. And across categories, Kantar Worldpanel found that the market-leading brands enjoyed significantly higher penetration than their competition. 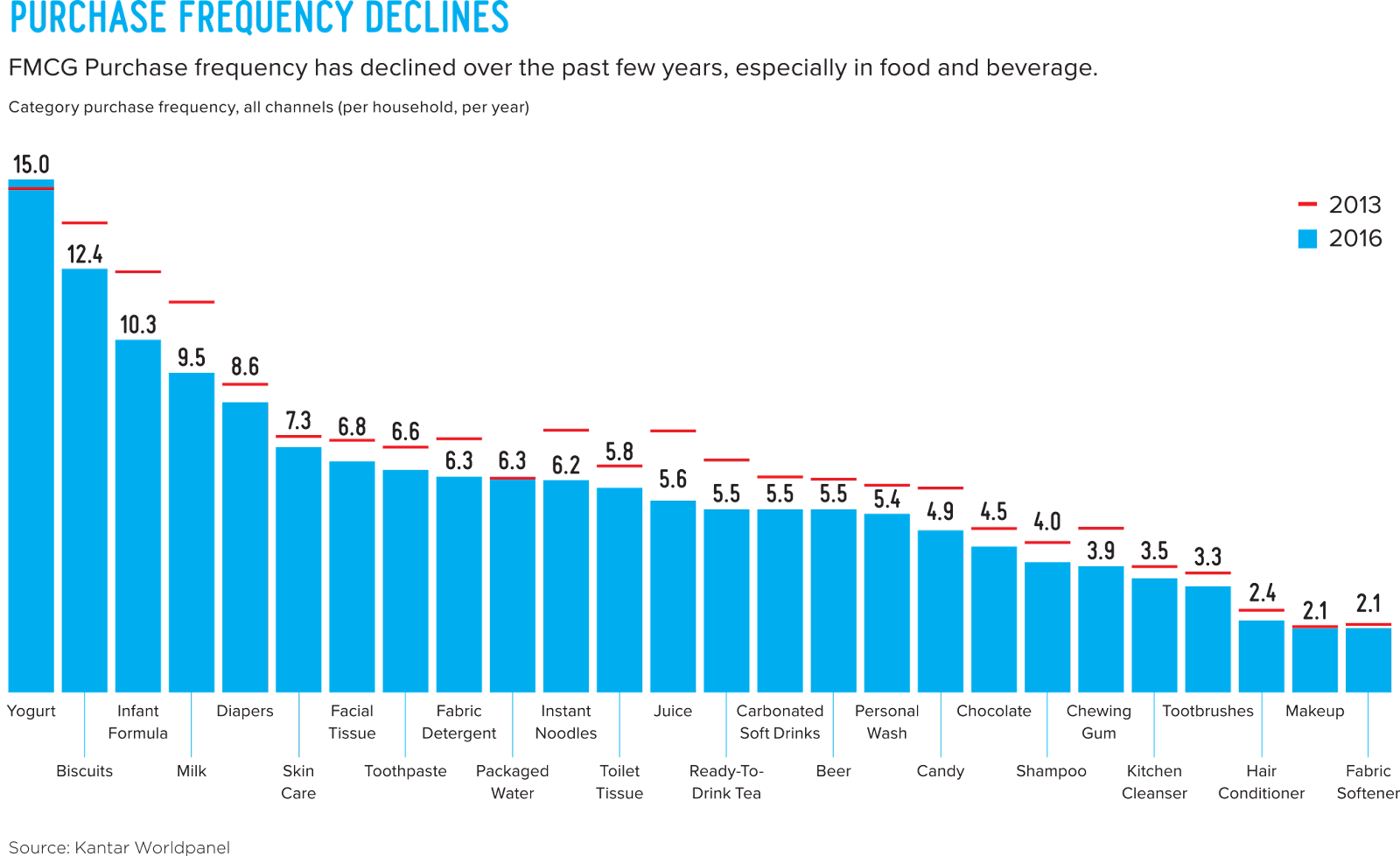