The elephant in the room: the effect of bad politicians on good brands

Trevor Noah jokes that in South Africa, the livelihood of comedians is threatened because politicians are doing their jobs for them. You can just go to a press conference if you want a good laugh.

A report like this one is not the place to comment on politics, but it’s impossible to discuss the brand and business climate in South Africa without acknowledging the political situation in the country.

Nearly everyone in SA, including Jacob Zuma’s own political party, acknowledges that with the inauguration of his regime in 2009, the country entered a period of massive corruption and economic mismanagement. While there are probably as many opinions on the events as there are South Africans, the harm it caused to the country was undeniable. Investor confidence fell. Important infrastructure projects and improvements went on hold, with the end result that the unemployment rate has now reached 26 percent, and more than half of the young people in the country cannot find jobs.

This year, in an election seen as pivotal across the board, things unexpectedly went as expected. The long ruling ANC retained control of the country, rendering its leader Cyril Ramaphosa the new president. As Ramaphosa campaigned on a platform of better governance, there’s room for hope.

What happens next is anyone’s guess, but it’s worth noting that South Africa has historically been a place where prognosticators go to ruin their reputations. The best outcome, of course, is that Ramaphosa is able to right the ship and return the country to growth. Only time will tell but South Africans are by nature optimistic and plenty of positive signs are emerging.

In recent years, it seems that soft drinks have gone on a diet in SA. The Coca-Cola Company, for example, has started selling its products in ever smaller cans, while charging less for them. This has come to be known as “shrinkflation,” and it’s reflective of a nation whose people have less to spend.

Except for South Africa’s tiny billionaire class, South African consumers are under pressure from inflation, increased VAT, higher fuel costs, and high unemployment rates. When it rains, it pours in SA (ironically, this is true of the weather as well). As a result, most consumers are finding themselves in a position where they trade down—either moving to less prestigious brands, opting for white label goods, or in some cases, falling off the brand landscape altogether. In the dishwashing soap category, for example, name brands from Unilever PLC and Reckitt Benckiser Group PLC are experiencing massive decrease in share of purchase, while generic offerings from retailer Pick n Pay are seeing solid upticks.

The strategies pursued by both businesses and consumers include the predictable for any country, as well as the uniquely South African. Inexpensive Chinese car brands have increasingly appeared on South African highways. Shoppers are flocking to no frills, cash-and-carry warehouses like Jumbo.

In the branded world, the strategies for dealing with this situation present tough choices that some brands are navigating with skill and others not so much. South African consumers have not at all been fooled by shrinkflation. A more intelligent approach comes from supermarket Woolworths. It has used what might be termed a “barbell” strategy, having everyday low prices on basic goods and bundling more expensive items as weekly specials, while still keeping its higher end offerings. This has enabled it to retain brand perception, while catering to its customers’ shrunken wallets. As a result, in a heavily pressured retail sector, the brand managed to maintain its ranking as SA’s 11th most valuable brand.

Regardless, brands of all kinds are finding that a challenging economic environment requires careful and creative thinking and hard choices: do you stack high and sell big, or stick to your guns and ride out the storm? Or, best of all, can you take Woolworth’s lead and manage to do both?

South Africa may be one of the world’s most divided nations by some measures, but that’s not to say that there are not areas where every segment of the entire country comes together in full throated unity. The controversy around Caster Semenya is one of them.

While South Africans need no introduction to her, she is an Olympic gold medal-winning runner who has been the center of a whirlwind of controversy due to her naturally high testosterone levels, which other countries have successfully argued give her an unfair advantage over other women. Currently she has been told by the IOC that she must take testosterone suppressants or be disqualified from competition. She has flatly refused.

To the Rainbow Nation, the situation is appalling. Semenya is a sportswoman, and sport is everything in South Africa. As many will tell you, SA may have become a democracy in 1994, but it first came together as a country when it hosted and won the Rugby World Cup in 1995. Today, South Africans are rallying to support Semenya, decrying the latent racism and homophobia (she is a lesbian) behind the controversy.

SA punches massively above its weight in both its athletic prowess as well as its interest in sports. Its heroes are too numerous to mention, and it has played or helped host the FIFA World Cup, the Cricket World Cup, and so on. While soccer, rugby, and cricket are its favorite sports, it has also produced major figures in golf, tennis, swimming, boxing, field hockey, track and field, and more.

As a result, brands that market to a broad spectrum of South Africans, like beer and telecom providers, are a fixture on SA sidelines, and others like Nike have been smart to throw their support behind Semenya.

Many flavors of difference

While difference is an obvious chink in many SA brands’ armor and a key driver of success, what makes a brand different? The answer most often given today is digital innovation, but BrandZ analysis has found that there is no one true path to difference. Rather, brands are succeeding through a variety of strategies. First National Bank may be known for the quality of its online experience, but Pick n Pay is scoring well for offering white-label goods that are near peers to their branded counterparts. This is enabling the brand to capture significant sales in a category not especially known for differentiation.

The reason we are seeing so many flavors of difference should be obvious: no one can be different in the same way. Whether it’s improved quality, repackaging and bundling, or a strategy to move into new categories and business areas—South Africa today has plenty of options for brands that are willing to try something new. To do so, however, they need take a hard look at present circumstances, make a clean break with past thinking, and create an offering that’s good and different for today rather than yesterday. While past returns may not predict future results, past thinking can certainly do so—and not in the direction any brand wants to go.

As circumstances in the country change on so many dimensions, there are plenty of positive stories to highlight about brands that are jumping the line and solving problems in a uniquely South African way. A great example is Takealot, which has moved aggressively into the gaping void of SA ecommerce. While Takealot is financially too small to make the Top 30, its BrandZ metrics are quite strong. The brand is perceived as best at what it does (34 percent vs. 25 on average), shaking things up (38 percent vs 18 on average), and hearing a lot of good things about (50 percent vs. 32). As a result, it is the top brand in the country for Brand Experience. 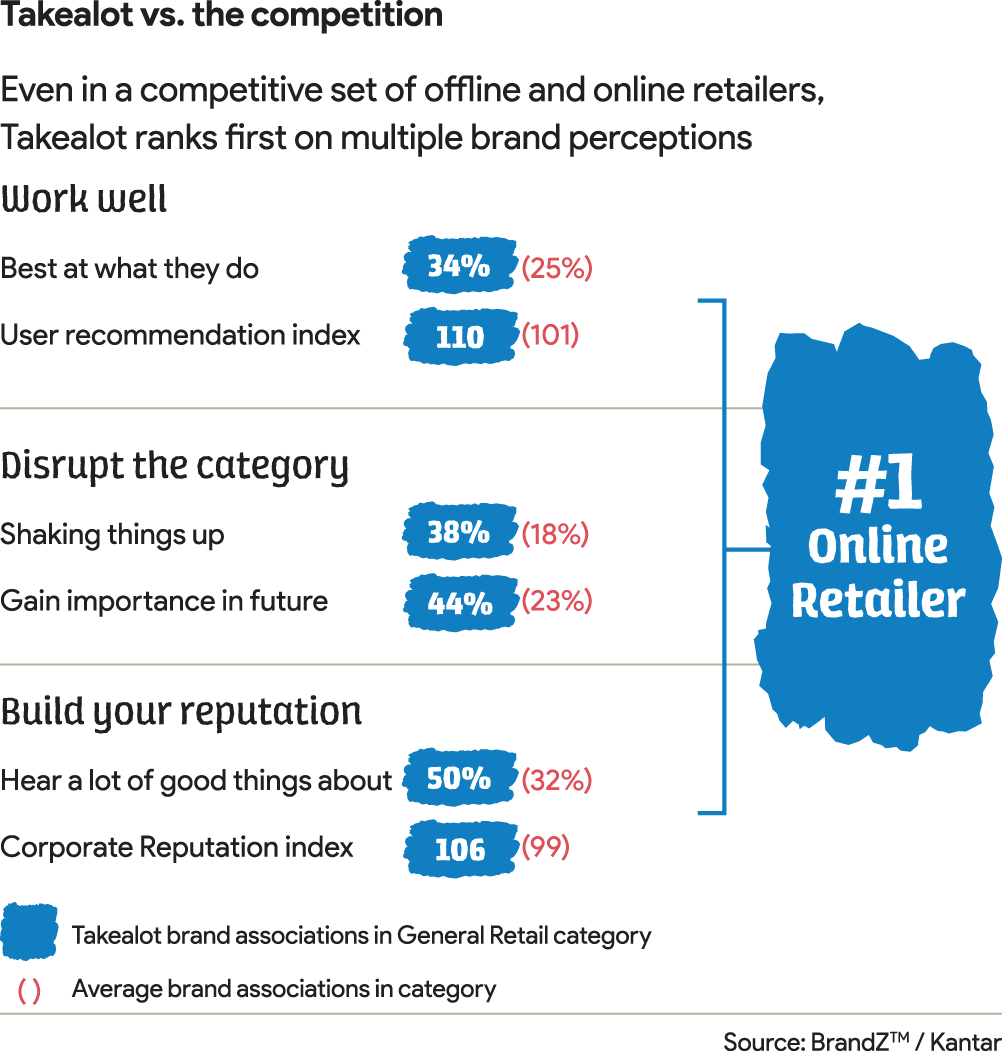 Among other things, Takealot has leaned heavily into the logistics of SA, which in many places are daunting. By purchasing a delivery service, the brand went a long way to address a central challenge of ecommerce in the country. While the online market is still quite small, the brand has taken a strong leadership position in and serves as an ambassador for the category. A huge part of something small can sometimes be as good as a small part of something big.

Similar opportunities exist for brands of all kinds. One of the most saturated sectors in SA is banking, yet five new banks are set for release in 2019, showing that there is always room for new approaches. As with difference, the key is to assess the current customer journey, what the pain points are, and where brands can step in to address real societal problems and customer needs. The market is quite different from what it looked like just five years ago, so simply keeping up with change may be the best way to outpace the competition.