Pandemic compounds the pressure on brands

Energy brands were already under increasing pressure to manage the transition away from carbon to cleaner energy sources when Corvid-19 added unprecedented disruption, driving the benchmark price of a barrel of oil to below zero from $65 just a year earlier. Recovering prices remained below the level of profitability. The energy category declined 22 percent in value after increasing 4 percent a year ago.

Prior to the crisis, the US had begun its official withdrawal from the Paris Climate Agreement, although climate change remained a divisive issuing shaping the US presidential election in November, which was also when the UN Climate Change Conference had been scheduled. The conference was postponed because of the pandemic and the venue in Glasgow was converted into temporary hospital.

Swedish teenager Greta Thunberg had addressed the UN, the US Congress, and the UK Parliament. In the UK, the Guardian newspaper had announced a policy of rejecting advertising from fossil fuel firms and the newspaper had changed its editorial references about the heating of the planet from climate change to climate emergency or climate crisis.

In addition, activist investors had raised concerns about the long-term risk of fossil fuel reserves in excess of what can be burned within the climate change limits set by the Paris Climate Agreement. The difference between the oil reserves companies have and those they can actually monetize has been termed stranded assets.

Then in April, after months of ratcheting lower, the price of oil plummeted when the pandemic devastated demand as, simultaneously, global production and a price clash between Russia and Saudi Arabia created excess supply. Recovery was expected to be difficult and the long-term impact on energy brands was unclear.

Engaged in a long-term transition away from fossil fuel, energy companies had been responding to diverse regulatory environments, consumer attitudes, and business conditions. Among major energy companies, Shell, based in the UK and the Netherlands, the UK’s BP, Total of France, and Spain’s Repsol have been the most active about moving away from carbon. Norway’s Equinor is also seen as a leader in the transition away from fossil fuels.

With the introduction of a new CEO, BP announced plans to be out of carbon-producing businesses no later than 2050. To accomplish that goal, the company reorganized around four new units. BP’s plans include lowering Scope 3 emissions, which is the carbon produced by combustion of its own products. 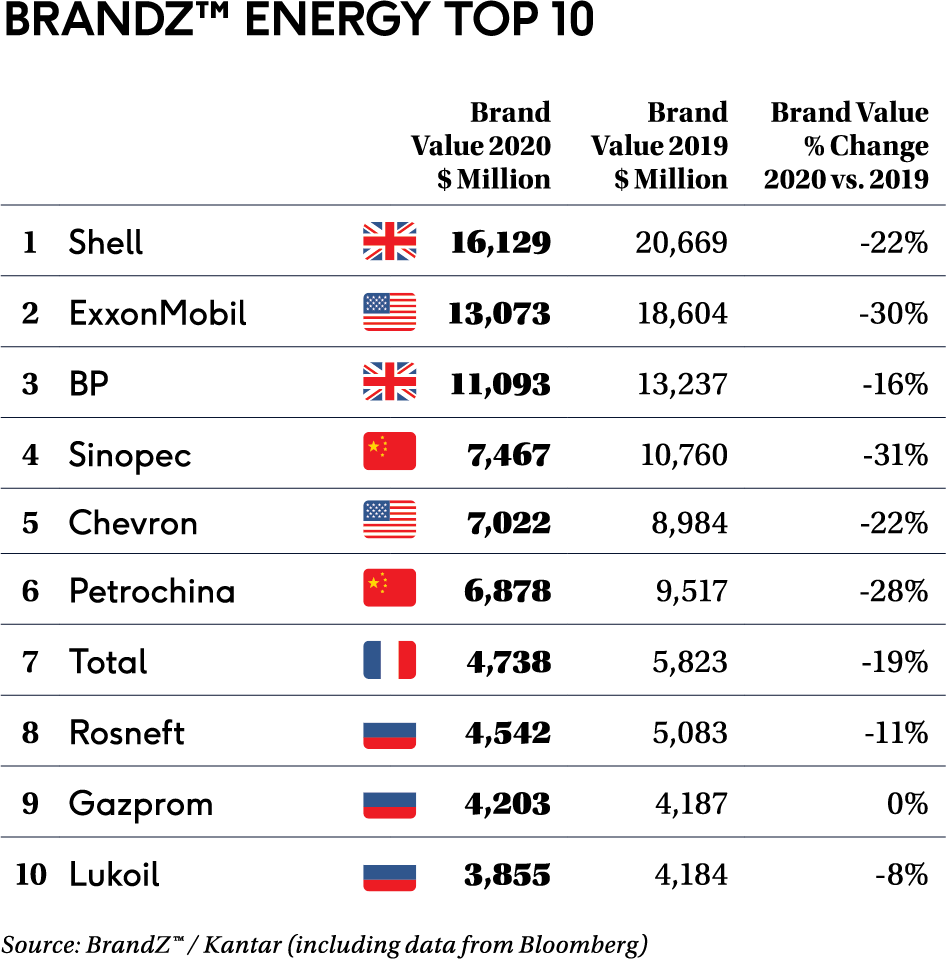 Similarly, Shell announced that it would develop a method for tracking its Scope 3 emissions. It also committed to carbon offsetting programs, including tree planning to produce carbon dioxide to help offset the carbon produced by the consumption of Shell products. And Shell factored management of climate risk into executive renumeration. In addition, Shell withdrew from industry groups opposed to taxing carbon.

US energy brands, including ExxonMobil and Chevron, were less vocal about the energy transition.

Although, the US federal government has rolled back climate change regulations, certain states, such as California and New York, have been more aggressive in addressing climate change. Major corporations, led by technology leaders Apple and Google, are moving toward total reliance on renewable energy.

At the same time, pick-up trucks are among America’s favorite vehicles for reasons that include consumer preference and relatively low fuel prices. The domestic US market had been one of the most profitable for energy companies because of the US market size and the growth of the shale oil and gas business, which had made the country a net energy exporter until the collapse of oil prices devastated the fracking business.

Both ExxonMobil and Chevron have publicly argued for staying in the Paris Climate Agreement. And both brands, along with Occidental, a US energy brand, belong to the Oil and Gas Climate Initiative, a consortium of executives from the world’s leading energy companies, including Shell, BP, and Total. Activities supported by the Oil and Gas Climate Initiative include development of biofuels and carbon capture.

As a counterpoint to the impact that upstream exploration has on brand and corporate reputation, some companies are developing new propositions around their downstream businesses—primarily service stations and petroleum products. In a partnership with Bosch, for example, the BP lubricant brand is piloting repair stations with Bosch in the US and China.

Using the brand BP Chargemaster, BP is developing charging stations at residential locations as well as at some of its petrol forecourts in the UK, which sometimes include convenience stores called M&S Simply Food, in partnership with Marks & Spencer.

Shell, which operates around 44,000 gas stations worldwide, is converting many of these locations into convenience shops for selling Shell branded products. They may also become charging stations for an era of electric vehicles. The convenience store would provide a place for drivers to shop while waiting for a charge to be completed.

Part of the challenge is making retail space productive because there is a wide disparity between customer turnover and profitability when pumping gas, which requires a few minutes per vehicle, and charging, which requires around 30 minutes per vehicle. Shell also is stretching its brand across new businesses. Shell Energy is a utility that, in a synergistic move, serves Shell Motion recharging facilities.

To communicate its commitment to move away from carbon, Shell created a reality TV program called The Great Travel Hack in which teams of young people compete to see who can achieve the lowest carbon emissions during a long-distance road trip race. The reality TV investment reflects a greater effort to build trust in the umbrella Shell brand.

For now, the energy companies dedicate most capital expenditure to oil and gas, as multiple factors, such as the stock market, complicate their transition to renewables. Investors often hold the energy company stocks because of their consistently high dividends. Those dividends depend on the lucrative oil and gas business, however, and would likely shrink with less profitable renewables.

Meanwhile, the Russian state-owned brands, facing Western sanctions, have pivoted to Asia. They are relying on completion of the Nord Stream pipeline to deliver natural gas to Germany and other parts of Western Europe. The completion of the pipeline will particularly benefit Gazprom. The US companies, with surplus liquid natural gas, are also looking to Western European markets.

Aramco, the national Saudi Arabian oil company launched its IPO, ultimately on the Saudi stock exchange, following years of considering other major capital markets. The development had little immediate impact on the energy industry globally, although the transaction raised significant funds for Saudi Arabia to invest in the diversification of its economy away from dependence on oil.

The Covid-19 impact has seen demand for petroleum products collapse, but it has coincided with a glut of supply that has left the market awash with oil that will take a long time to work out and will leave oil prices dramatically lower. From a brand perspective this of course limits resources available as operating expenditure is put on the chopping block. However, the jury is out on whether this will undermine or reinforce the pace of transition to lower carbon future.

As governments around the world look at stimulus packages that promise to build back better, and a postponed UN Climate Change Summit, COP26, looms in 2021, the brand opportunity for transition has never been greater. We have seen early commitments to a more ambitious transition pace from Ben van Beurden, CEO of Shell, and BP CEO Bernard Looney. This is in contrast to the leaders of American majors so far. And the divergent business and brand strategies may be exacerbated by the fall out of Covid-19.

Brand leaders know that demand for products will return, but they need to remind the C-Suite that Covid-19 has heightened public support for resilience and action against systemic threats like climate change. There may be no better time to test and learn what the opportunity is for brands in transition. With budgets for events and advertising being reduced, brand leaders are more focused and hopefully more open to new ways to engage audiences with propositions that fuel the transition to a low carbon economy. 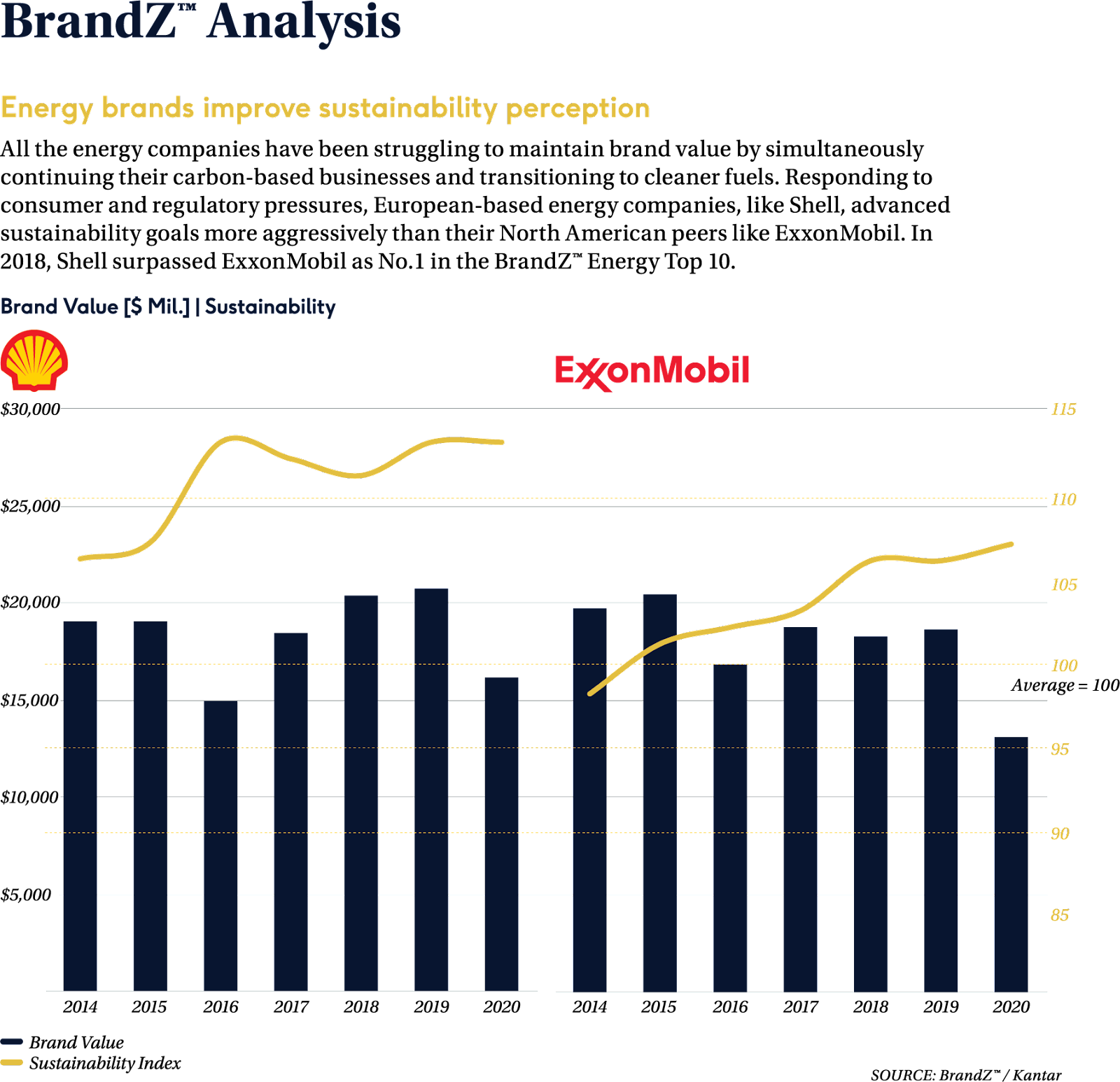 With people quarantined at home, there were few planes in the sky, cars on the road, or factories operating at full capacity. Meanwhile, oil storage tanks were filled to near capacity because of global production and a price war between Russia and Saudi Arabia. The collision of declining demand and oversupply resulted in a price drop that was not only inevitable, but unprecedented. The benchmark price of a barrel of oil dropped below zero when limited storage capacity prevented buyers from taking ownership of oil purchased on the futures market. After hitting bottom, the benchmark price began to recover but remained far below the roughly $60 per barrel required for oil companies to operate profitably. The energy category declined 22 percent in value, after a 4 percent increase a year ago. The time required for energy prices to rebound and the impact of a crippled energy sector on the global economy was unclear. A key question was whether after emerging from home confinement consumers would continue to consume less energy.

An adversarial approach to finding solutions may not be as useful as collaboration between the energy brands and the public. Both energy brands and consumers need to change some of their behaviors. The brands need to communicate about the impact of carbon, their commitment to reducing that impact, and the timeframe of the transition to cleaner energy. Consumers need to take responsibility, too, for making changes in their lives that may cause inconvenience but lessen their negative impact on the environment. This collaboration needs to be based on honesty.

Consumers benefit from corporate reputation initiatives like support for the arts and other worthy causes that indisputably benefit humanity. But, across categories, the ascendant sentiment seems to be, first fix the problem. The underlying logic is that any enterprise that adds some benefit leaves a footprint, in some cases quite a dent. Energy brands rightly communicate about how they heat homes, power factories and in myriad other ways make life possible. But those benefits fill just one side of the ledger. Acknowledging the liabilities side, and the corrective initiatives, makes communication more credible.

The energy category includes some of the most recognizable brands in the world. Until now, the brands have been mostly associated with exploration and drilling, the upstream part of the business. But most of the brands have substantial downstream businesses, which include fuel stations and petroleum-based products. Going forward, as energy companies increase the emphasis on their downstream businesses, attributes of the brand can be stretched across the entire business to provide the levels of recognition and trust needed sustain growth during the transition away fossil fuels.