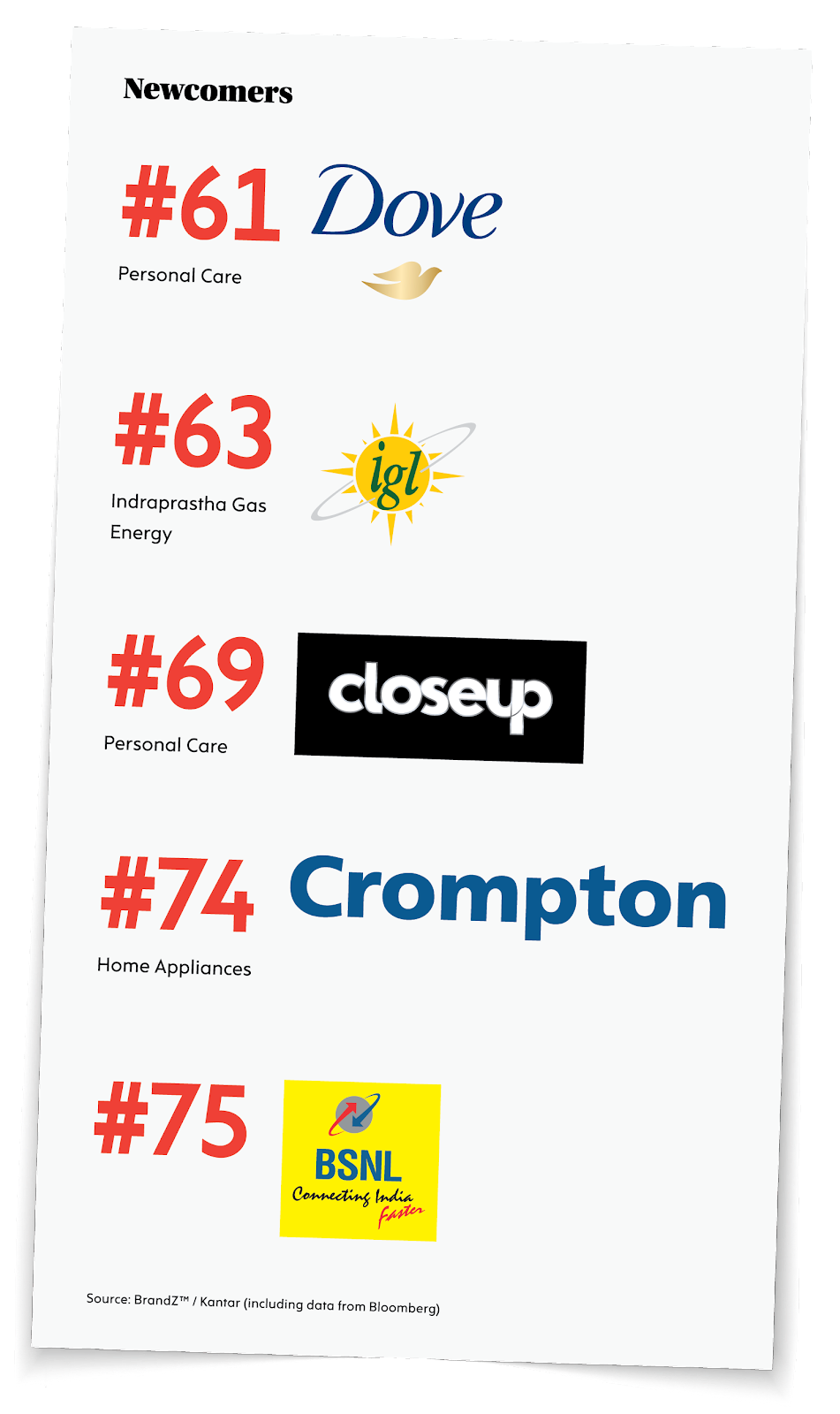 The story of this year’s BrandZ™ Top 75 Newcomers dovetails nicely with the narrative of this year’s fastest-growing categories: with one exception, these debuts hailed from those segments of the BrandZ™ Top 75 rankings that were already primed for growth.  For example, the value of the Personal Care segment was already set to increase by 14% in 2020 thanks to the category’s growing appeal among image-savvy Indians. Instead, with two Newcomers in Dove and Closeup added to the mix, the category grew by an even heftier 32%.

Similarly, legacy communications company BSNL enters the ranking amid a continued boom in smartphone and internet usage. And Crompton, for its part, debuted this year to join an already growing Consumer Technology category - at a time when Indians have been looking for all the technological assistance they can get while stuck at home.

(The country’s largest compressed natural gas distribution company, Indraprastha Gas, has meanwhile entered the ranking at a time when the only other Energy brand, Indian Oil, saw a year-on-year decline - as would expected during periods of economic headwinds).

But why have these brands entered the Indian Top 75 instead of other well-positioned aspirants in their category? For one thing, it’s no accident that each Newcomer has a compelling and distinctive brand identity. Dove, for instance, has adapted its global “Real Beauty” platform to champion female self-confidence and tell stories of (extra)ordinary, diverse Indian women. Closeup’s proposition is a marriage of tradition, compassion, and innovation: its range features advanced gel formulations, combined with natural ingredients like Tulsi, Cardamom, and Clove - all in service of a message that celebrates love and attraction.

Crompton, for its part, is well-positioned to grow into the consumer technology space - marrying its technical know-how with delightful design across a range of kitchen tools, fans, and other home appliances. And in the Energy realm, Indraprastha Gas hopes to combine reliable service with digital innovation (starting with an initiative to move toward 100% digital billing).

In a dynamic and competitive market like India, maintaining one’s spot in the BrandZ™ Top 75 is hardly a foregone conclusion. In the years to come, then, these five companies need to use their distinctive brand assets to further emphasize Meaningful Difference in consumer’s minds. That’s what turns promising Newcomers… into BrandZ™ mainstays.