The food and dairy category increased 12 percent in brand value, following two years of moderate 3 percent and 2 percent growth. Category sales volume remained flat or down overall during the first half of 2017, but it picked up later in the year, and people turned to higher-priced premium products, driving up the value of sales.

Premiumization in the food and dairy category reflected a fundamental shift in consumer spending. As middle-class consumers spent less on basic needs, including food, they spent more on discretionary items like entertainment, reallocating some of their food budget from groceries to restaurants or home delivery.

In addition, consumers spent more willingly on products that promised healthier ingredients or offered convenience and other lifestyle benefits. Brands innovated to encourage spending. Beverage brands, for example, introduced new products, such as functional drinks. An analysis by Kantar Worldpanel found that the growth of consumer categories in China is moving at two speeds: slower for basic goods; and faster for products, such as yoghurt and bottled water, which offer perceived lifestyle or health benefits.

Health reasons influenced the consumption of milk and other dairy products, which rose, in part, because of the government’s desire to raise the Chinese daily intake of calcium and protein. Dairy experienced particularly heavy price competition, with leadership revolving among three brands—Yili, Meningu, and Bright.

In these competitive circumstances, penetration, the percentage of households buying a brand during a year, was the most important contributor to greater market share and leadership, according to Kantar Worldpanel. The penetration of Mengniu in milk was 5.5 times greater than the top 20 brands selling milk, while the difference in purchase frequency is almost the same. Boosting penetration required a combination of distinctive messaging, the right products, and omnichannel execution. To increase penetration of its yogurt, Yili introduced new premium products supported by TV advertising and digital marketing.

Loyalty remained strong in categories like milk, where consumers tend to stick with the same brand. Consumers chose liquid milk less based on provenance—Chinese or international—and more on whether it was sourced from high quality grasslands. subcategory several years ago. As Yili and Mengniu looked abroad for acquisitions to expand their milk supply, shares in the companies reached all-time highs.

Both companies held talks with Australia’s largest dairy producer, Murray Goulburn Cooperative. Yili also bid to purchase the US yogurt maker Stonyfield. Mengniu continued to collaborate on research and development with Danone Group of France and Denmark’s Arla Foods. Along with Fosun, a Chinese conglomerate, the dairy company Sanyuan bid to purchase St. Hubert, a French margarine brand. Bright has purchased several overseas brands, including a premium yogurt made in Bulgaria. 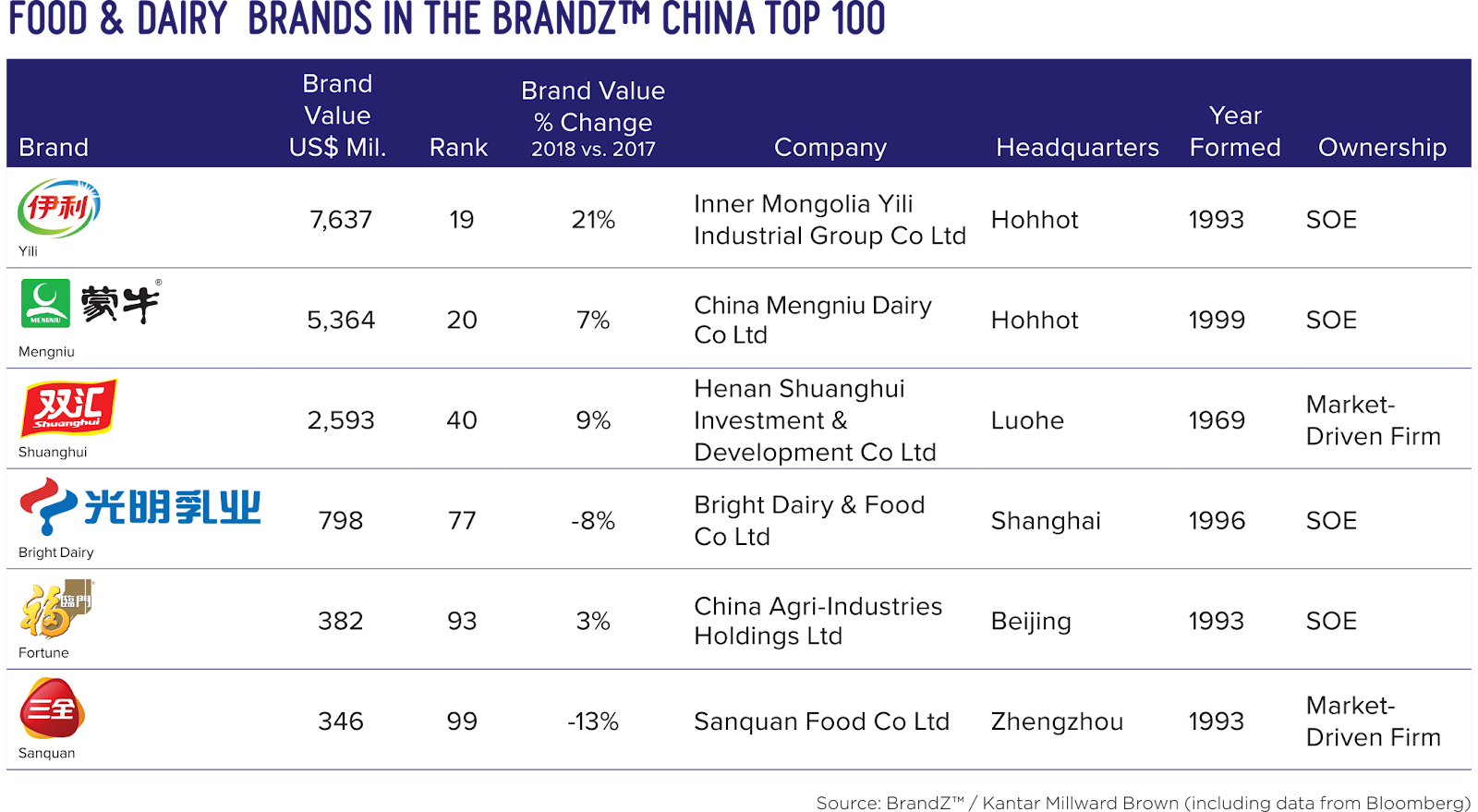