Sixteen brands joined the BrandZ™ China Top 100 for the first time this year, including the apparel brand Li-Ning, which reentered the ranking, having last appeared in the 2013. Five of the brands come from technology, the most represented category. Seven of the newcomers are Unicorns, including: Douyin (known as TikTok in overseas markets) and Kuaishou (entertainment), Ke, Lianjia, and Ziroom (real estate agents), and Toutiao and Zhihu (technology).

The newcomers, and the eight categories they represent, illustrate many of the trends shaping the Chinese market, including the power of Unicorns, the primacy of online activity and diversity of content, the growth of lower tier markets, and the surge of Chinese national pride.

The impact of the COVID-19 pandemic also influenced the Newcomers ranking. The lockdown accentuated certain existing trends, strengthening brands that were aligned with the way people increasingly navigate their lives, accessing information, products, and services on digital devices to achieve convenience and comfort.

Other newcomer online brands that have demonstrated special strength in lower tier markets include Pinduoduo and 58.com. Pinduoduo has emerged as a national e-commerce contender based on its reputation for price discounts that incentivize group purchasing. Newcomer 58.com, in the lifestyle platform category, is an online classified ad marketplace for consumers and small businesses.

China’s rapid urbanization and the rising demand for rental units, especially for young professionals, drove the rapid rise of online real estate agents and the appearance of three newcomer brands: Ke, Lianjia, and Ziroom, which is backed in part by technology giant Tencent Holdings.

The real estate brand CR Land was able to successfully navigate China’s volatile real estate market with a diverse portfolio of holdings that included urban development along specialized initiatives such as senior housing, sports, and entertainment. Another real estate brand, Gemdale, also made the BrandZ™ China Top 100 for the first time.

In the well represented technology category, the Chinese company ByteDance Inc., which owns Douyin, also owns newcomer toutiao, a curated news site that monetizes its ability to identify audiences according their interests. The other technology newcomers are: BOE, a major provider of screens for smartphones and other devices; Kingdee, a cloud services provider; Zhihu, a question-and-answer site similar to Quora; and the enterprise solutions brand Yonyou.

Alcohol brand Xing Hua Cun ascended to the BrandZ™ Top 100 despite pressure on the category. Li-Ning returned to the Top 100, in part by appealing to young people with a new line of clothing decorated with calligraphy and other Chinese designs to express pride in being Chinese. 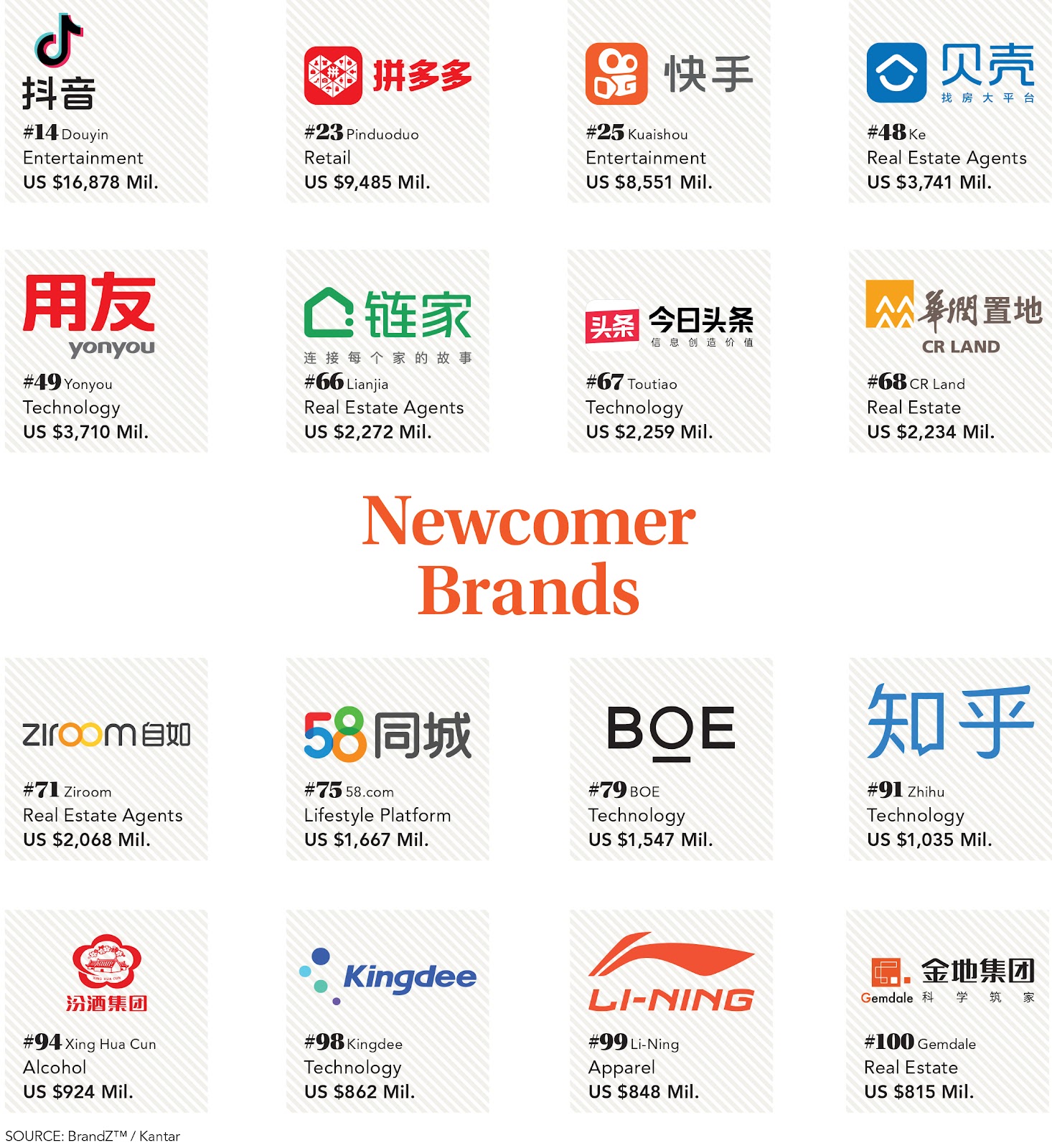