Canada’s Top 40 brands fell a modest 6 percent to $134,843 million, which was roughly in line with the S&P TSX index over the same time period. The top 10 brands in the ranking also dropped 6 percent, showing that size was not a factor in success or failure. Rather, the brands’ performance was in general heavily dependent on category. Some categories, like retail and apparel, rose sharply, while others, like beer and luxury, dropped precipitously. In this section of the report, we’ll review some of the reasons behind the winners and losers of the strange year that is 2020. 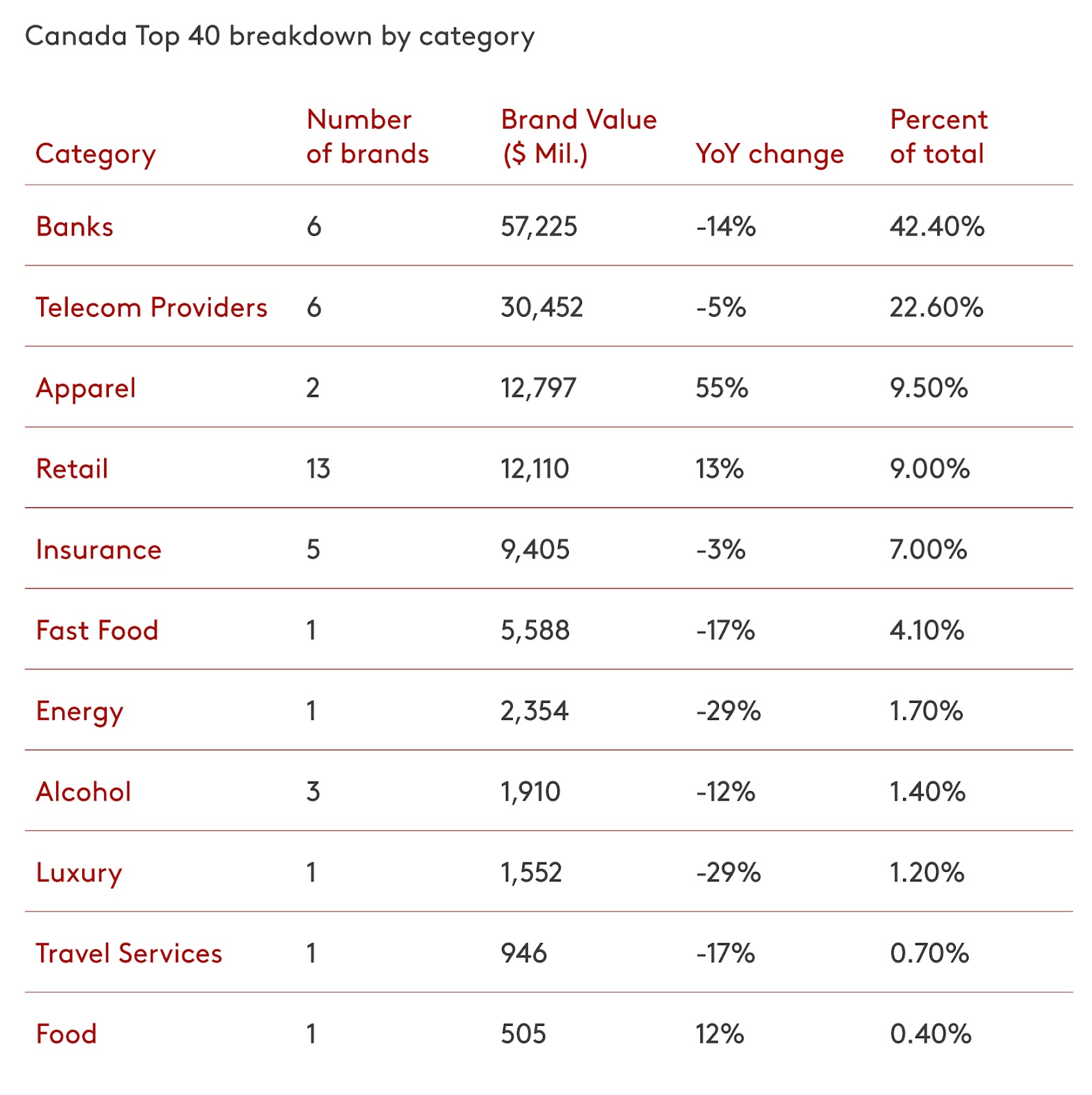 Banks around the world have had a rough go of it in 2020. While governments have stepped in with short-term support, the long-term implications of so many lost jobs, missed payments, and defaulted mortgages have weighed heavily on their financial value. That said, the Canadian banking sector has long been noted for its excellent governance, which is demonstrated by the relatively modest 14 percent drop in the category this year. Overall, banks also dominate the rankings, comprising 42 percent of the total brand value and 5 of the top 10 brands.

Canadian consumers do not have a particularly warm relationship with their telecom providers. With many markets dominated by a single company, they face some of the most expensive mobile data and Internet services in the world. Beyond that, there are additional annoyances, such as expensive long-distance charges in a country where most people are clustered in a handful of metro regions that sit at a considerable distance from one another.

Nonetheless, the services are essential, and some of the brands have shown their softer sides during pandemic, dropping charges for roaming and long-distance, and removing data caps and overage penalties. Many, however, also laid off large numbers of workers in retail stores, though their CEOs have in some cases also gone without pay. Nonetheless, as an essential service, telecom providers proved a resilient sector in the Top 40, falling only 5 percent.

The 55 percent rise in value for apparel brands may seem like a shocking success story, but it’s even more impressive when you look under the hood. The category lost a substantial brand in 2020, with Canada Goose moving over to luxury. In fact, no brand in the category declined, while Lululemon soared 60 percent. Its astonishing rise is mostly due to its expansion overseas — and skyrocketing stock price. Meanwhile, Aritzia barely budged in its brand value, which still outpaced the average brand in the ranking.

Interestingly, the two brands score extremely well on Difference, with relatively lower marks in Meaning and especially Salience. As a result, BrandZ™ rates them highly on potential, with the ability to grow their value into the future. 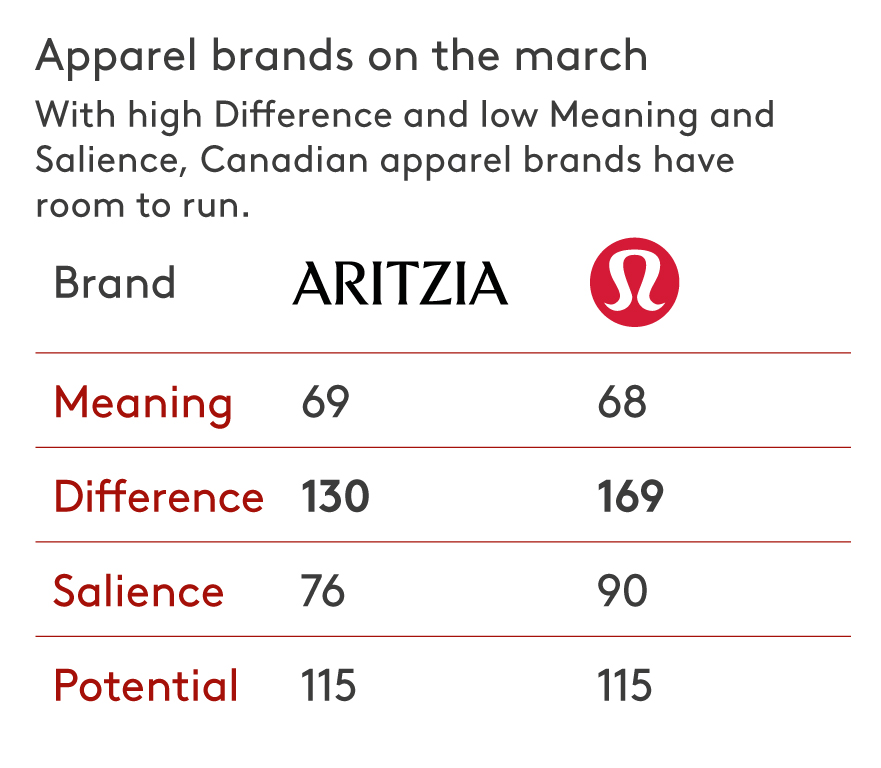 Retail is easily the best represented category in the Top 40 with 13 brands, which is more than twice as many as any other. It also grew a healthy 13 percent year-over-year. This may seem strange in a sector that has otherwise been battered by the pandemic, but 43 percent of the retail brands in the Top 40 are grocery retailers. This subcategory has increased its sales not only in Canada but in many countries as people are eating more at home during the pandemic.

The category’s newcomer, No Frills, points to another expected development in a pandemic-impacted ranking: discount retailers are doing very well. Two of the fastest growers in the rankings, Food Basics and Dollarama, are from this subset of retail brands, growing their brand value 24 percent and 21 percent respectively.

Because insurance brands represent a grudge purchase, they are rarely consumer favorites, and most of them consequently have low scores on a range of brand metrics. No Canadian insurance brand, for example, has a Brand Contribution score of more than 2, and 3 of its 5 brands showed a decline in value. The bright spots are Canada Life, which grew 38 percent on the strength of a merger, and Intact Insurance, which has a countrywide footprint and is now Canada’s largest auto and home insurer.

Fast food is a category of one in Canada, with the iconic Tim Hortons the only Canadian brand to make the ranking. This year, it has fallen 17 percent in brand value, and a good part of that is related to the financial impact of temporary closures and reduced traffic. Still, the brand is seen as one of the most purposeful brands in the Top 40 and tops the ranking in terms of Brand Contribution.

Dollarama is the proud owner of the largest jump in Top 40 ranking, rising 5 spots to number 15. In an era of stressed wallets, this is hardly surprising. But discount retailers occupy a different space in Canada, where they speak to Canadians’ love of a good value.

This year’s data shows that Dollarama is seen by consumers at as offering a good range of products at quite fair prices. Its Brand Power score of 123 indicates that customers like the experience it is offering and prefer to shop there over its rivals. The brand is also greatly increasing its Salience, largely thanks to its ongoing expansion, which included opening more than 100 stores in the past year alone. Dollarama also launched an e-commerce site in the past year, creating a new, digital footprint that may help it hold onto its gains and perhaps grow its value further in 2021. 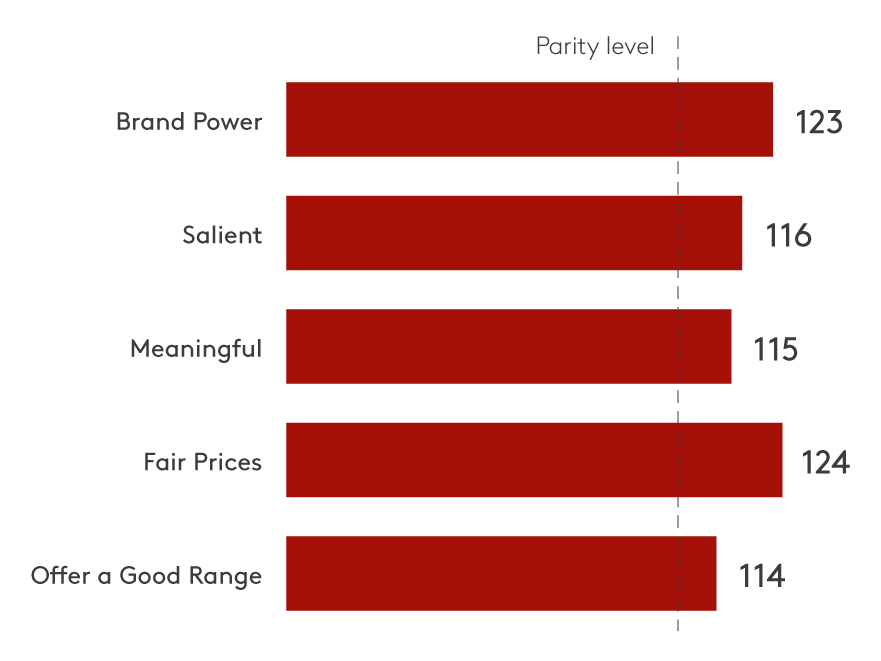 Islands in a storm