The home appliance category surged 50 percent in value, following a 9 percent increase a year ago. Several important industry changes drove this growth, according to the China Household Electric Appliance Association (CHEAA), including: urbanization, premiumization, development of smart appliances, and operational improvements focused on driving consumption by being more customer centric.

Online sales increased over 50 percent for several appliance sectors. Global brand building also contributed to the category value rise. Three appliance brands—TCL, Midea, and Hisense—ranked in the BrandZ™ Top 10 brands by Overseas Revenue. Exports remained strong, rising 7.7 percent in value through the first half of the year, according to official statistics reported by CHEAA.

Five appliance brands ranked in the 2018 BrandZ™ China Top 20 Risers, brands that increased most in brand value year-on-year. Gree rose 78 percent, making it the third fastest-rising brand in value across all categories in the BrandZ™ Top 100. The other appliance Top Risers are: Vatti, up 54 percent; Robam, 49 percent; Midea, 40 percent; and Supor, 39 percent.

China’s unusually hot summer partly accounts for Gree’s performance, as it is China’s leading air conditioner maker. But the brand continued to broaden its range to avoid dependence on air conditioners alone. Gree promoted its smart phone and also entered into a partnership with an electric vehicle maker, Zhuhai Yinlong. Expanding its presence in the US, Gree opened a second American showroom, in Chicago.

Vatti, a maker ovens and stove-top cooking ranges, shifted toward the premium end of the market, introducing new features, such as voice control, to some of its products. The brand also expanded its marketing program to communicate a younger, on-trend image across media channels, and in its virtual and physical stores. A maker of small appliances, Robam added design refinements to its kitchen products, opened an innovation center in California, and increased its presence in China’s lower tier cities, adding more stores.

Midea has been expanding from its core focus on consumer appliances and air conditioning systems to other technology, including artificial intelligence and robotics. The company completed acquisition of a 95 percent stake in Kuka AG, the German robotics company, and a controlling interest in Servotronix, an Israeli motion control and automation business. Midea recently opened several research and development centers worldwide, including one in Silicon Valley. And it partnered with real estate brand Country Garden to pursue smart home opportunities. Haier integrated its acquisition of GE Appliances, making structural changes to add speed and flexibility, and investing in smart home innovation.

Supor experienced e-commerce success, particularly in lower tier cities. Hisense became an official sponsor of the 2018 FIFA World Cup. The brand has also sponsored NASCAR racing in the US and the Australian Open tennis matches. TCL continued its aggressive expansion in the US with an expanded range of smart TVs. Haier, Midea, Gree, Hisense, and TCL all ranked in the Top 10 large home appliance brands in sales on Tmall during China’s Singles Day shopping festival in November.

In addition to these brands, Flyco, a maker of small electronic appliances appeared in the BrandZ™ China Top 100 for the first time. Flyco is well known for marketing a popular electric razor at a premium price. The stock market rewarded its commercial success. 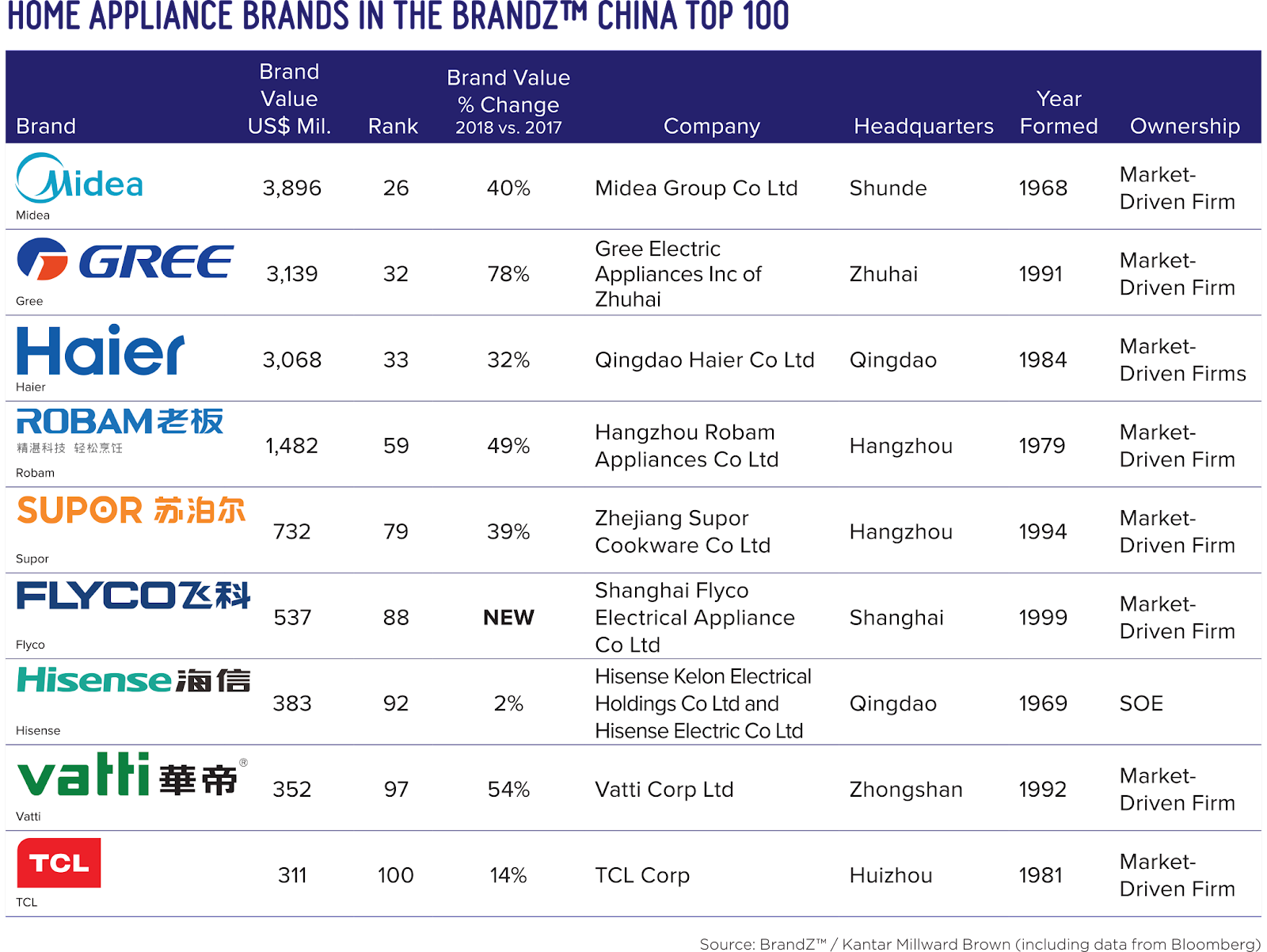