li:before{content:"✔ "}ul.lst-kix_list_1-0{list-style-type:none}.lst-kix_list_1- BrandZ is the world's largest brand equity database. Created in 1998 and continually updated. BrandZ is an invaluable resource, containing data on brands gathered from interviews with over 150,000 people every year in up to 400 studies around the world"> brandZ | Report -
We’ve stopped what we are doing and creating your personalized BrandZ™ report, which will appear in your inbox soon.

The category make-up of the Top 30 has changed little since last year, with banks, apparel brands and telecommunications providers accounting for the vast majority of brand value. The remaining 30 percent of value comes from a broad range of brands spanning everything from supermarkets and beer to cars and football. In essence, the ranking provides a snapshot of everyday life in Spain. 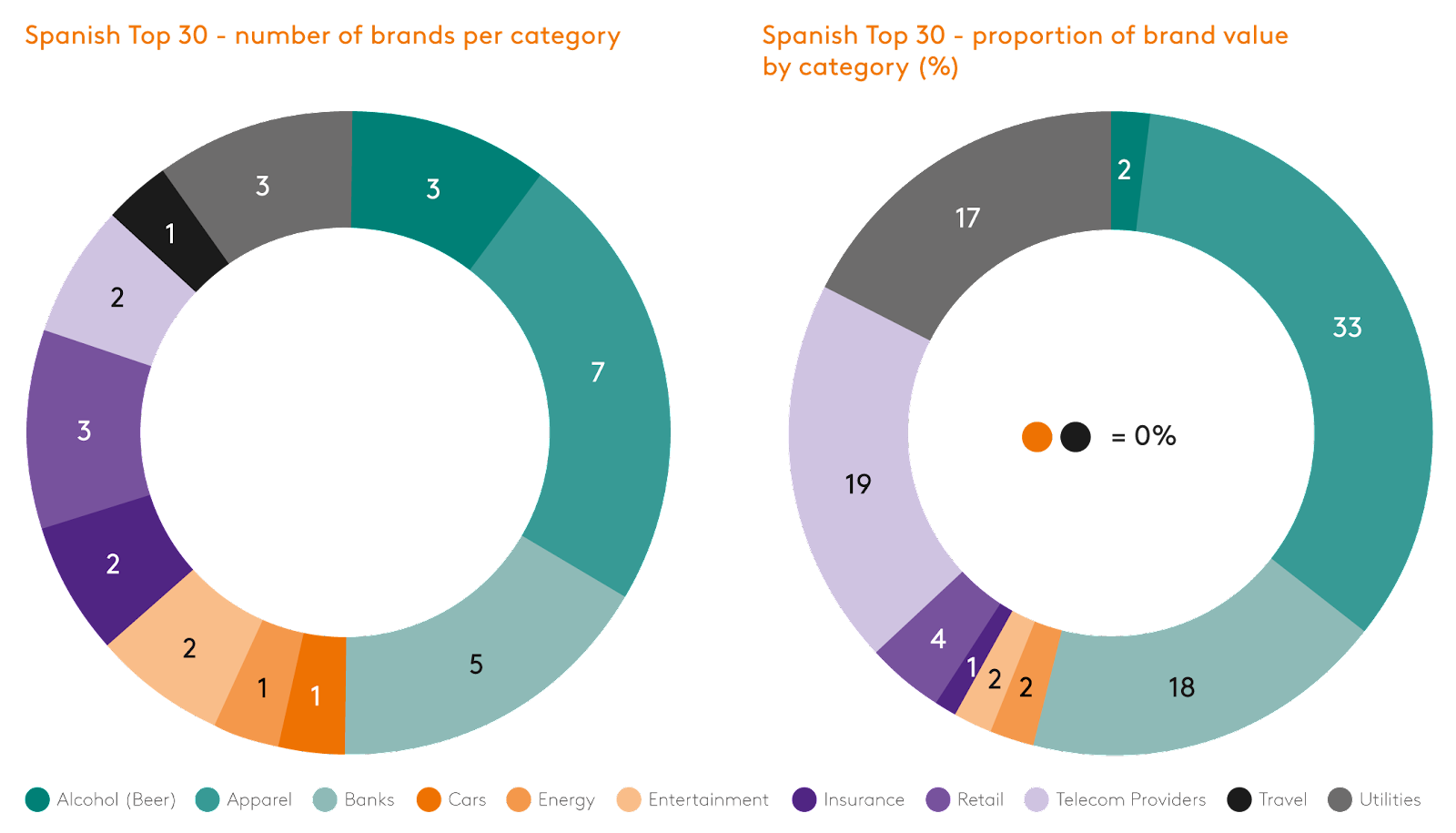 Brands in financial services have taken the biggest hit to their brand value this year, but with lockdowns around the world bringing business and leisure travel to a halt, travel services have also seen their value plummet. And, with shops forced to close and people finding themselves with little reason to dress up or replace their clothes, the apparel sector has taken a pounding. Retailers have suffered, too, but to a lesser extent given that more meals have been prepared in the home. Lockdown rules in Spain restricted householders to shopping in their nearest supermarket, so those brands with hypermarkets tended to fare badly, while DIA, which has a focus on having many outlets close to where people live, were the beneficiaries.

Again, the impact of the virus was to accentuate and amplify category trends that were already taking shape. In the case of retail that means a consumer desire for convenience, proximity and a selection curated for a smaller target audience, rather than a big-box, out-of-town experience that involves a large investment of time to consider a vast number of choices.

In the apparel sector, where Zara and its fellow Inditex brands were once global leaders thanks to a completely fresh take on routes to market and business models, now Chinese brands are once again rewriting the rules. Online fast fashion brands from China are seeing a surge in popularity among the young audiences that have traditionally been the Spanish brands’ bread and butter.

Telecommunications providers in the US and Asia have been growing their market by expanding the remit of what they offer: not just fixed and mobile telephony, but also entertainment, social networking and more. They see themselves increasingly as developers of ecosystems rather than specialists in their original area. This kind of blue-sky thinking is also taking place in Spain, with Movistar already working to produce their own content, and Jazztel with Orange TV.

And traditional banks not just here but around the world, which for decades have traded on their long heritage as a byword for reliability and trust, are finding their worlds turned upside down by small and nimble online financial services providers. No longer do branch opening hours and friendly tellers hold much sway; now, it’s about speed and convenience, and being able to manage a personal budget and savings plan rather than managing different accounts. 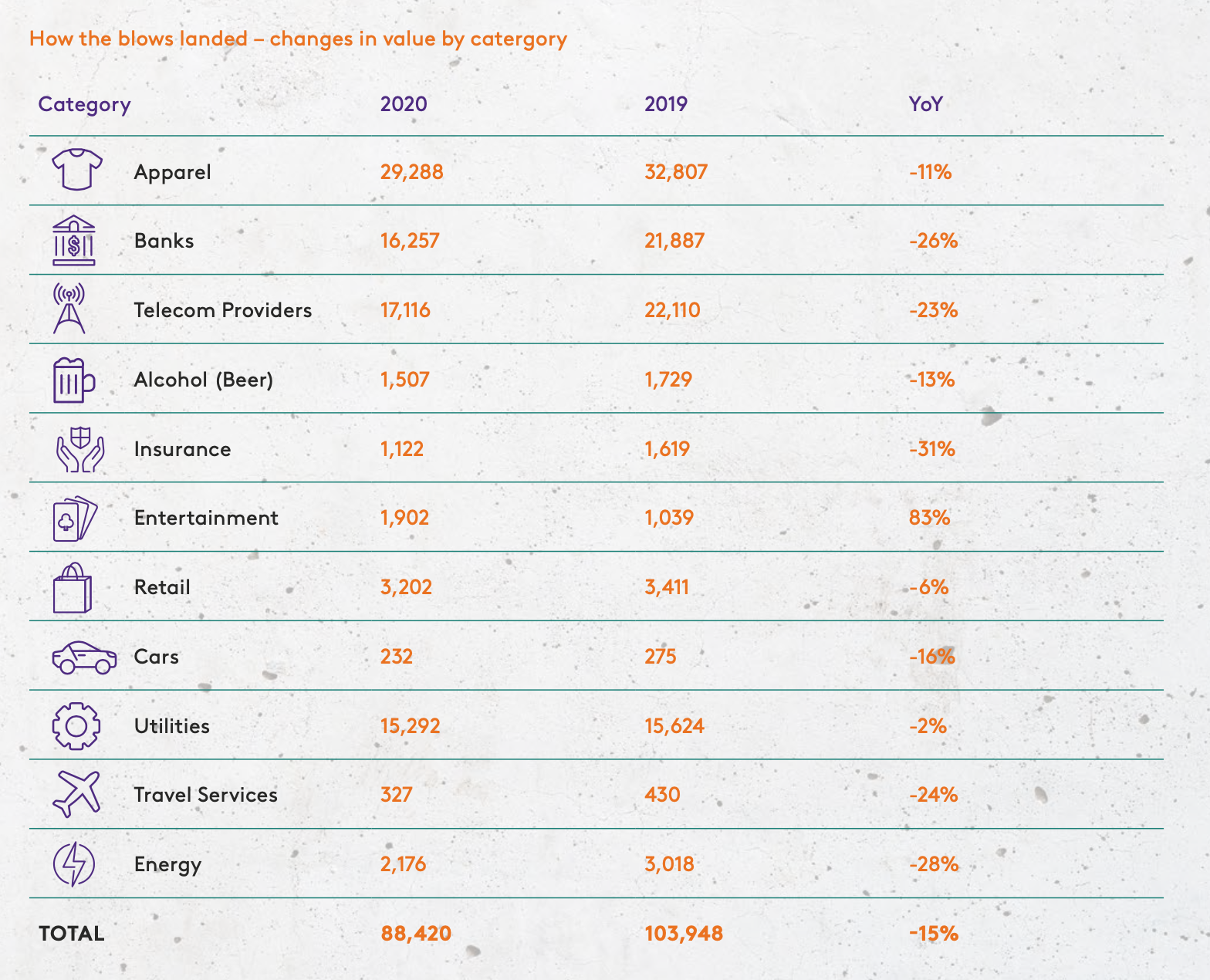 New on the scene

The entertainment category was the only one to see a rise in value this year, thanks to one of three newcomer brands to the ranking, LaLiga. The brand unites the 42 professional Spanish football clubs that play in Spain’s first and second divisions, providing entertainment to a global audience of around 2.7 billion people. As the brand seeks to bring in new audiences around the world, it broadcasts matches free on YouTube with English commentary. Games were suspended at the height of the COVID-19 outbreak in Spain, and resumed in June but with matches played in fan-free stadiums.

DIA, also making its BrandZ debut this year, operates a network of supermarkets in Spain and other markets, with a traditional focus on convenience formats designed for urban shoppers as well as online at DIA.es. The brand saw demand skyrocket during lockdown, and was able to capitalize on an online delivery network that reaches over 26 million people in more than 500 Spanish cities and towns.

Desigual is the other newcomer to the Top 30 in 2020, an apparel brand with more than 500 stores in 92 countries. The essence of Desigual styling is simplicity, freedom and authenticity, and communications tend to be quite daring for the category, summed up by this year’s brand strategy: “Forward is Boring”.