li:before{content:"" counter(lst-ctn-kix_ BrandZ is the world's largest brand equity database. Created in 1998 and continually updated. BrandZ is an invaluable resource, containing data on brands gathered from interviews with over 150,000 people every year in up to 400 studies around the world"> brandZ | Report -
We’ve stopped what we are doing and creating your personalized BrandZ™ report, which will appear in your inbox soon.

India is back on track. Consumer confidence and economic buoyancy returned, although not yet to the levels before demonetization and tax reform, government initiatives to strengthen the financial system and the treasury. In the 2018 India ranking, brands achieved the greatest year-on-year value growth since the launch of the BrandZ™ Top 50 Most Valuable Indian Brands in 2014.

The Top 50 brands increased 34 percent to $146.1 billion, based on the eligibility criteria in place since 2014. And to better reflect the dynamic changes in the Indian economy and brand landscape, this fifth anniversary edition of the BrandZ™ India ranking expands to 75 the number of brands ranked, based on revised criteria. (Please see sidebar)

With the new criteria, the BrandZ™ India ranking added 30 brands, with over a third coming from the service sector. For first time, the ranking contains the technology category—both business-to-business IT services and online consumer brands, including unicorns, the technology start-ups with a valuation of at least $1 billion.

Other categories added to the BrandZ™ India ranking this year are durables and home appliances, tobacco, and entertainment (TV stations). These new categories contribute around a quarter of the Top 75 ranking’s value. But that quarter is probably the fastest-growing part of the ranking because 58 percent of this new value comes from technology-related brands.

With the addition of new categories, seven Newcomers appear in the Top 15, including the government-owned insurance brand LIC and Tata Consultancy at No. 2 and No. 3, respectively. Among other new high-ranking brands are Flipkart, the e-commerce retailer, and the payment system Paytm.

The gap in value separating the Top 3 brands from the rest of the Top 10 has narrowed in the 2018 BrandZ™ India ranking. At the same time, HDFC Bank retained the No. 1 rank, which it has occupied for the past five years. The following indicators also reflect the ongoing growth of brands in India since the launch of the first BrandZ™ India report:

The brand growth that continued into 2018 crossed most categories, with certain indicator categories like automobiles performing especially well. With sales increasing 9.2 percent during fiscal year 2018, according to the Society of Indian Automotive Manufacturers, India surpassed Germany to become the world’s fourth largest automobile market after China, the US, and Japan.

It was not growth alone that characterized India and the brand landscape in 2018 and over the past five years, however, it was also change. More international brands entered India and more local brands emerged, presenting consumers with greater choice. Because of greater choice, wealth, and access to information, consumer expectations changed across India.

Local Indian brands improved in quality and appealed successfully to the consumer’s nationalistic sentiment and desire for authenticity. They followed the example of Patanjali, which has challenged multinationals for several years with its range of ayurvedic FMCG products. Patanjali recently expanded into new categories, including apparel.

The activities of another multinational—Amazon—precipitated a significant development in Indian retailing. Having cultivated its credibility by collaborating with local shops for distribution, Amazon challenged Indian e-commerce giant Flipkart for market leadership. Flipkart grew organically and through acquisitions since its launch in 2007, the same year Walmart entered India. To compete most effectively against Amazon, Flipkart agreed to sell a majority stake to Walmart.

Walmart entered India through the back door, linking with Bharti Enterprises to form a chain of cash and carry stores and comply with Indian government restrictions on foreign retailers. The pending acquisition, protested by local Indian merchants, will test India’s regulatory intentions and potentially establish India as the latest theater of Amazon-Walmart head-to-head competition. The launch of Ikea’s first Indian store and the brand’s plan for a website and more home furnishings stores across India also portends more multinational impact on Indian retailing.

As India becomes more attractive to marketers it also becomes more complex—if that is possible. When Hindustan Unilever entered India, 85 years ago, the country was remarkably diverse in culture, language, and religion, but it was more monolithic as a market because the number of people who could afford to care about branded products and services was limited and mostly concentrated in cities. In addition, media was fragmented and intended for mass audiences.

As India changes, people who desire a better life—and have some money to achieve it—are not limited to wealthy enclaves in a few major cities, which makes brand marketing more complicated.  Especially in FMCG and personal care categories, success requires understanding the product nuances and linguistic distinctions both across thousands of villages and among urban micro markets.

These challenges are coupled with opportunities. First, having more higher income people, even in rural areas, increases the number of Indian consumers, making it economically feasible for marketers to create niche brands. Second, digital technology and the advent of mobile devices democratizes access to information, enabling marketers to target their messages. Opportunities are everywhere because people throughout India are striving.

Young people seeking employment are much more likely than their parents’ generation to leave the nuclear family and move to a new city. These transplants, or “New Nesters,” bring with them lifestyle and dietary preferences, creating new markets. The disruption of the traditional family creates new needs, such as services for senior citizens.

As in many countries, Indian young people tend to emulate global styles. In their preferences they often more closely resemble their Western peers than their neighbors. But the resemblance is nuanced and communicating with Indian young people as if they are Western can be a mistake. Indian youth tend to be closer to family and more respectful of tradition.

Local market insight has advantaged Indian brands, enabling them to introduce relevant products and communications that challenge multinationals. The ice cream brand Creambell introduced local flavors, including kheer, a rice pudding, for example. The multinationals are responding. Hindustan Unilever has implemented its WIMI—Winning in Many Indias—initiative for several years. McDonald’s continues to add new menu items, such as riced-based dishes in southern India.

The growth, change, and complexity of the India market presents challenges for brands as they attempt to continue the strong value growth of the past five years. In analyzing five-year trends, new BrandZ™ research revealed instructive insights for building and sustaining valuable brands in today’s India, including:

To command a premium, brands need to be Meaningfully Different, meeting consumer needs in ways that create affinity by being relevant and distinctive. Difference for the sake of being different does not work well in India, however. Difference works best when it is based on real and useful innovation.

Meaningful Difference is also key to building trust when it results in a consistently great Brand Experience. And trusted brands are more likely to command a premium. Usually, trust develops over time. In the BrandZ™ Top 75, India’s oldest brands score high in the BrandZ™ Trust Index. But again, brand dynamics can perform differently in India, where brand trust can also develop relatively quickly. For many reasons—including the dynamism of the Indian market and the influence of young people—the newest Indian brands also score high in Trust.

The value of the BrandZ™ India Top 50 more than doubled, to $146.1 billion, over the past five years, when the BrandZ™ China Top 50 increased 76 percent in value and the BrandZ™ Global Top 50 grew 60 percent. 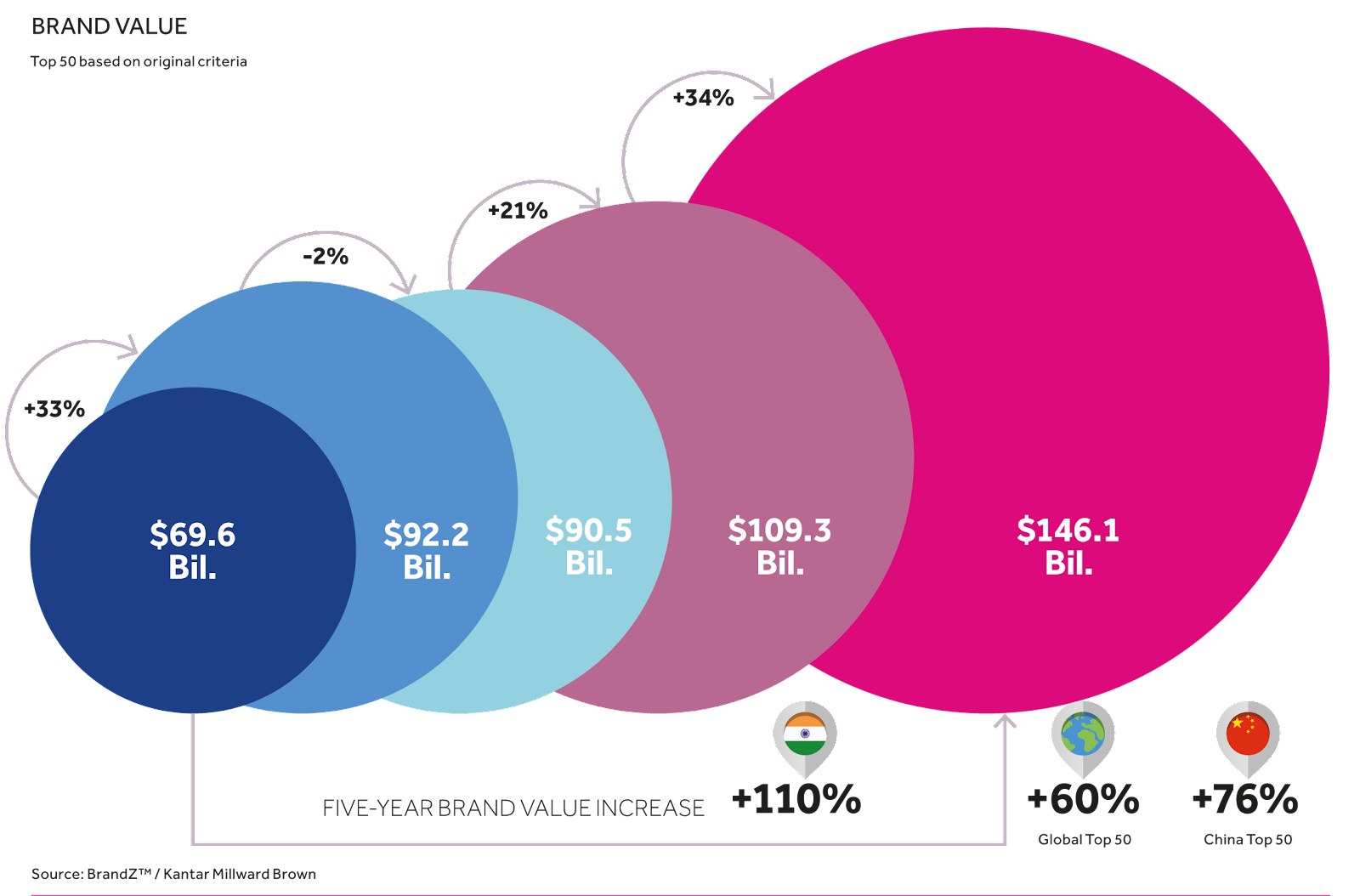