Scores up for Transparency & Green Living

Indonesia ranks 43rd out of 80 countries in the latest global Best Countries ranking, an international study identifying the strengths, weaknesses and changing perceptions of countries.

The country has lost some of its sheen due to dips in its attractiveness as a place to start a business, invest and study, and perceptions around entrepreneurship have also slipped.

Adults aged 35 or younger actually see Indonesia in a more positive light than they did a year ago, and among this group alone, Indonesia ranks #39 in the world out of 80 countries, having overtaken the Philippines and Hungary. It is the way Indonesia is regarded by older adults, business decision-makers and those we call “Informed Elites” due to their education and income that has led to the overall decline.

Although the country’s performance on key business-related measures such as entrepreneurship and starting a business have declined, and this explains the overall drop in the ranking, Indonesia has made gains in two other sectors that are becoming increasingly important both to consumers and businesses. Indonesia has improved its position in the ranking for transparency (up 13 places to #43) and for green living (up six places to #50).

How Indonesia compares to the world

Indonesia’s reputation, according to the Best Countries Report, is centred on its sense of dynamism and its can-do spirit. The country attains its best scores on the 80-country ranking for being a good place to run a business, for being friendly and fun, and for its rich cultural heritage. 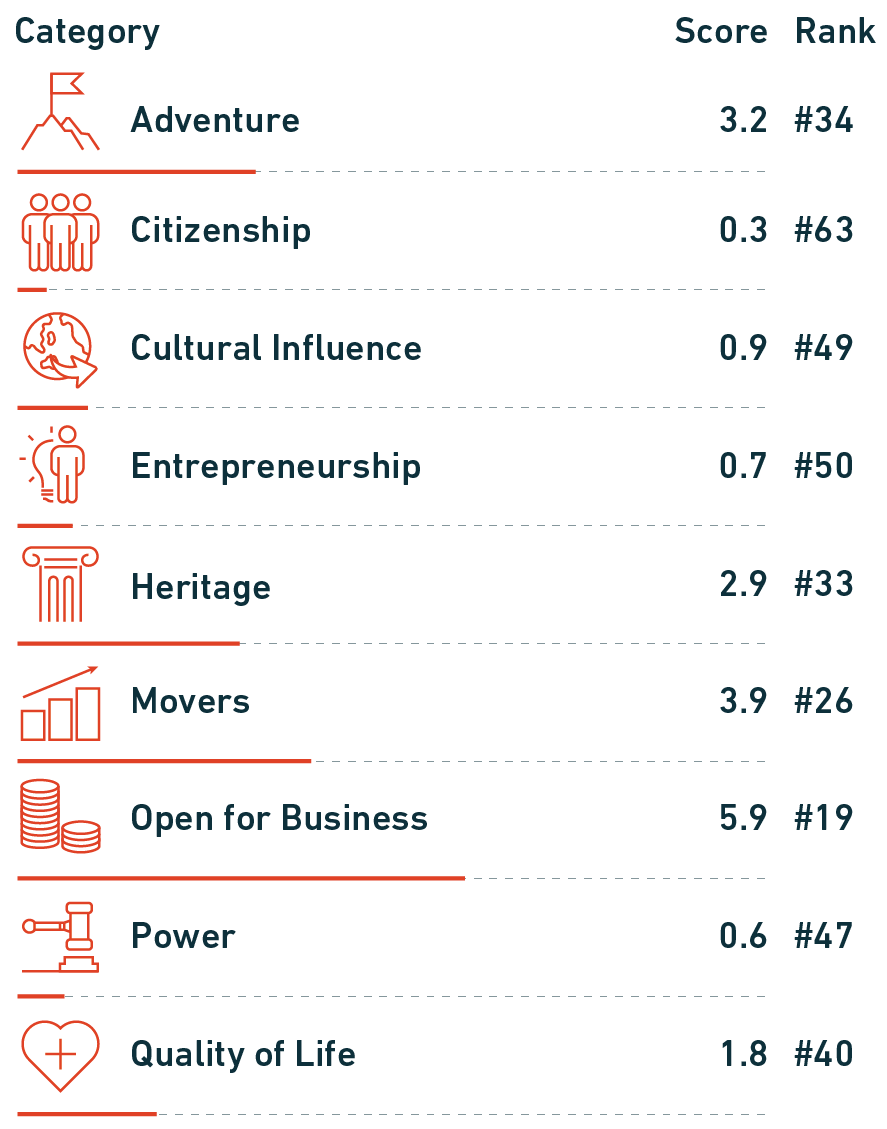 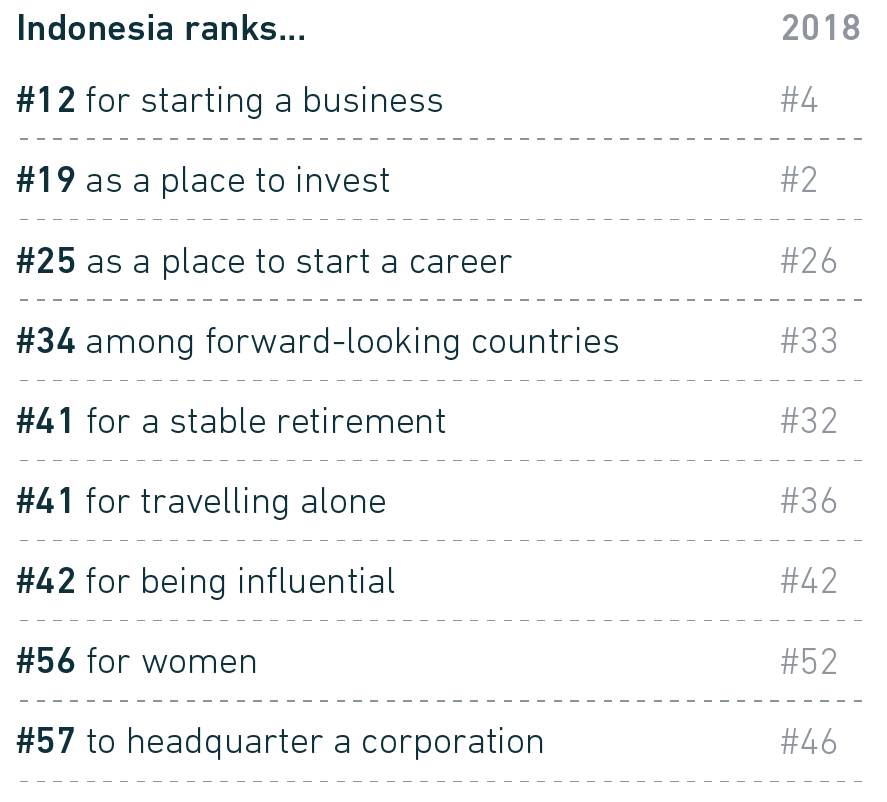 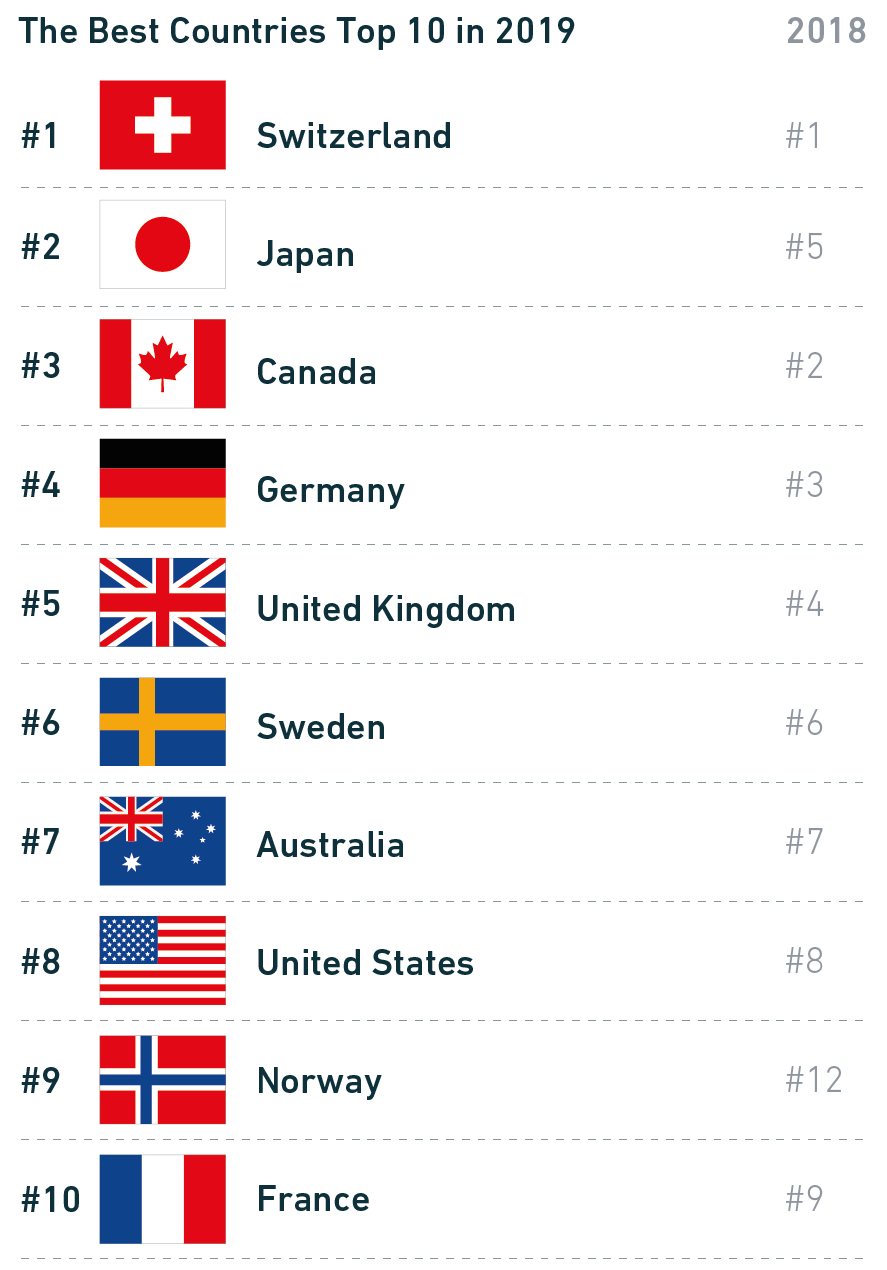 Indonesians are proud of where they’re from, but BAV research shows that they tend to identify more strongly with their city than with the country as a whole (69 percent feel this). They are also more likely to identify as being “citizens of the world” ahead of considering themselves Indonesian (51 percent agree).

They are highly confident that their country is heading in the right direction (80 percent agree this is the case), and feel Indonesia is a country that cares about its citizens (83 percent agree).

Indonesian people are among the most open in the world to immigration (73 percent agree it’s a force for good, compared to a global average of 54 percent), and almost everyone (93 percent) say it’s of utmost importance to promote diversity, perhaps a reflection of the ethnic and regional diversity for which Indonesia has become famous.

While around four in five people say women are owed the same opportunities as men, around the same proportion also believe it is important to maintain traditional gender roles, suggesting a tension between wanting to modernize, but without losing some of what people have grown up with and find comforting.

Almost half the population thinks LGBTQ+ people should have the same rights as everyone else.

Indonesians tend to trust companies and their government equally when it comes to providing safety, healthcare, economic well-being and privacy. They are also more trusting of traditional news sources than online ones when compared to other countries.

Indonesia’s performance on this index is mixed; preference for Indonesian goods in certain categories is incredibly strong among local consumers and much lower for different types of products. International buyers find “Made in Indonesia” significantly less appealing than do local consumers. Among the eight product categories that people were asked about, fashion was the one that consumers outside Indonesia were most likely to select a “Made in Indonesia” option.

What’s curious about Indonesia’s performance in the Origin Index is how it indicates that global consumers are actually often happy to buy “Made in Indonesia” products, but when asked about it, they are less positive about buying Indonesian.

This is likely to be because people are buying things they often don’t realize are Made in Indonesia. This gap between perception and practice indicates a rich seam of opportunity for Indonesian brands. 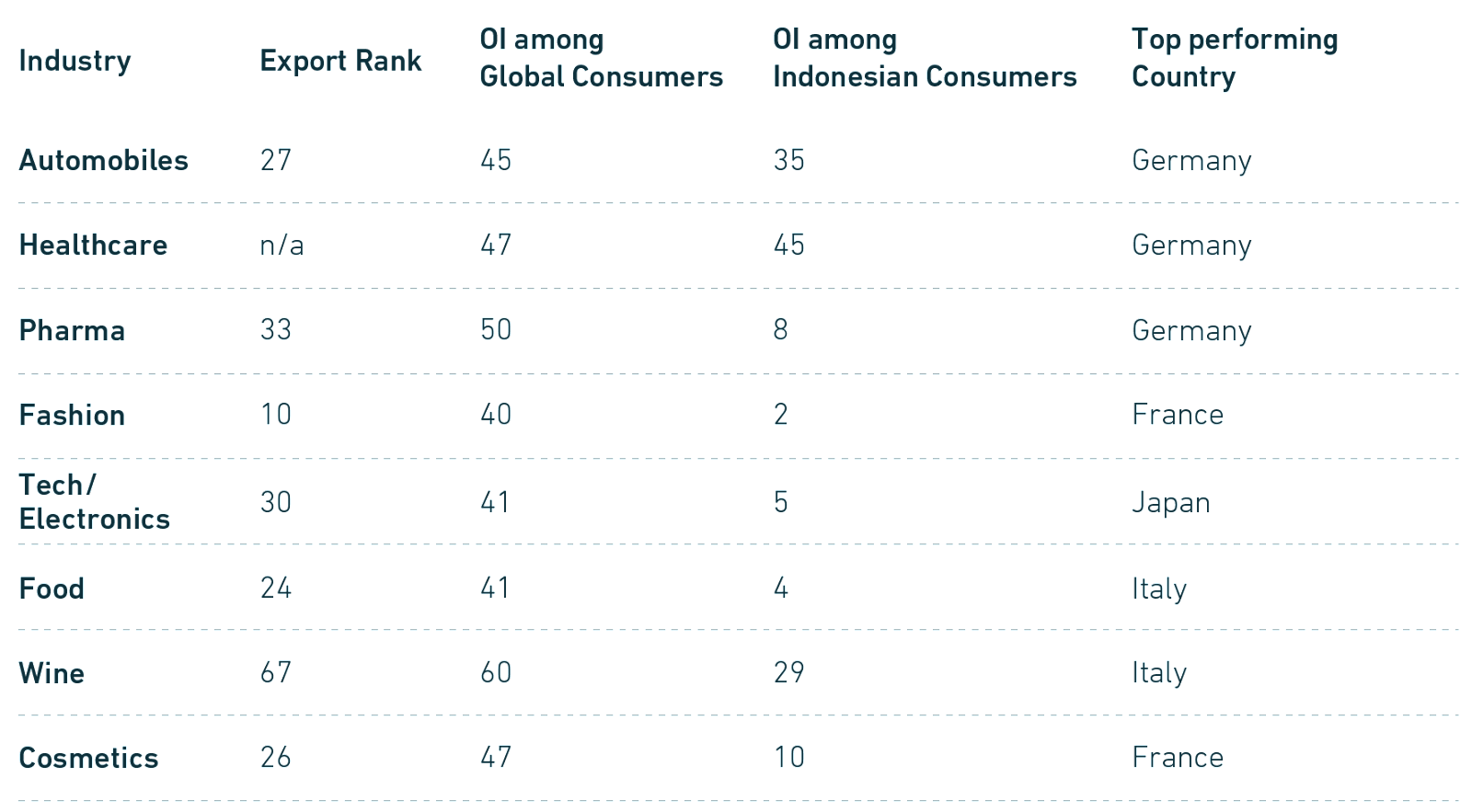 Indonesians clearly love home-made fashion, food, pharmaceuticals, cosmetics and technology. This is great news for local brands, and underlines the importance of having a deep understanding of the changing tastes and priorities of Indonesian consumers. It also signals the value of highlighting the heritage of a brand in its local communications, particularly in these categories where consumers show a clear preference for local products.

Indonesians don’t always think of local products in such a positive light, however. Relatively poor scores locally for Made in Indonesia products were registered in the automotive and healthcare categories. This indicates that there is work to be done by local brands in improving perceptions relative to the international alternatives available.

Among consumers outside of Indonesia, lower preferences are reported for Indonesian goods than export figures indicate people are actually buying. Food and fashion are strong exports for Indonesia, as the chart above indicates, yet shoppers are not keen on opting for products – in these categories among others – that are labelled “Made in Indonesia”. For local brands seeking to establish a global footprint, this is a significant challenge: as they grow, they need to simultaneously raise the profile of goods from their country and improve perceptions of quality and credibility around them.

Japan is the only country in Asia (excluding Oceania) to make global consumers’ top 10 in any of these product categories. Australia makes the Top 10 in the food and wine categories.

What Indonesian brands should know

Brands need to tailor their brand-building efforts, from product development to communications, according to whether they are targeting local or international consumers, and to preconceptions around how “Made in Indonesia” reflects on the category in which they are operating. While national pride is an opportunity to explore for some home-grown brands, the value of promoting Indonesian heritage, at least in the short term, is often less clear in other sectors and other markets.

Pockets of growth built on foundation of stability