For the first time ever during the research and delivery of a BrandZ country report, a host country is undergoing industry-wide trauma in one of its oldest and most powerful sectors. The elephant in the room is Australia’s Banking sector, currently under investigation for regulatory irregularities. Unique to all other countries reported on by BrandZ, Australia’s banking sector dominates its host country’s economy composing over 50% of the country’s Top 40 Brands’ value. The results of the Royal Commission may affect both the short and long-term valuations of the Big Four banks along with the rest of the banking sector. It remains to be seen how this will impact the many other companies and brands across Australia’s economy dependant on the banking industry.

For the average Australian, living in one of just a handful of cities in which real estate prices are amongst the highest in the world and on the rise along with the cost of living, Australians have one of the highest household debt levels in the world. Import prices are high and people generally prefer locally-produced trusted value brands that have been embedded in the fabric of Australian culture for many years. The best Australian brands generally support social, environmental and cultural causes fulfilling local consumer expectation that brands are also responsible in making the world a better place, first for Australians, and then for the rest of the world.

The attraction of good weather, increasing life expectancy (Woman, 84.5+1.2 yrs and men 80.4 +1.9 yrs over the last 10 years), and a friendly social environment, has created change in the Australian demography. Nearly a third of the population was born outside the country, and the east coast is experiencing accelerating immigration from China, India, and Arabic-speaking countries. Immigrants are clearly attracted by Australia’s culture of fairness, mateship, and honesty, just some of the reasons why Australia is ranked 7th out of 80+ countries across the world in BAV’s 2018 Best Countries report.

Australia is more geographically separated from the rest of the world than most countries, certainly more so than other top-ranked countries in both economic and population metrics. In the past, innovation reached Australia slowly and when it did, business setup and productions costs were prohibitively high. Consequently, global companies entering Australia typically licensed brands, formulations, and technologies to local companies who, because of geographic isolation, were generally sheltered from external competition. Some of the BrandZ Top 40 Australian brands have literally had hundreds of years to mature and succeed with little or no interference from global competitors. Australia’s internal incubation engine fueled corporate and brand growth via mergers, acquisitions and internal brands in banking and infrastrastructure flourished.

But technology is reshaping the Australian business landscape. Digital transformation, artificial intelligence, and the accelerating speed of change has significantly reduced barriers for global and geographically distant competitors like Amazon to enter and disrupt markets with greater efficiencies, reduced costs, and consumer access to highly desired global brands. In a rapidly shrinking world, global companies see Australia as an attractive (and stable) last frontier. Global giants like Tesla, Campbell Soup, Anheuser-Busch InBev, and others have successfully skipped over geographic barriers leaving fewer and fewer companies with their original Australian ownership.

Though Australia is seen by the world as similar to Euro-Scandinavia and Canada, Asia’s relative proximity has typically been the first step for Australian brands to globalize. Today, China dominates the post-incubation relationship and is its largest trade partner representing nearly 24% of overall trade, twice the size of the next partner, Japan. China also accounts for nearly 30% of Australia’s overall exports (primarily coal) and about 20% of its imports. Meanwhile, opportunities exist for innovative Australian companies to compete globally. Only a few successful brands like Foster’s and Vegemite, have been able to successfully penetrate global markets. Generally, domestic brands remain local.

But times are changing and technology, speed of market penetration, and the growth of corporate behemoth through mergers and acquisition is reducing Australian isolation every day. Collectively, the challenges of a flattened world are forcing Australian businesses and marketers to face greater change and competitive infiltration than ever before. And as change breeds uncertainty, savvy, and forward thinking minds must react to the emerging threats and opportunities sooner rather than later. In today’s world, soon is now.

AUSTRALIAN BRANDS VS. THE WORLD

Global perceptions of the typical Australian as a beer-gorging, crocodile-hunting outbacker eating “shrimp on the barbie” has thankfully dissipated, and today Australian brands are typically seen as as fun, adventurous and cheekily, but pleasantly rebellious. Global facing brands like Qantas, Bunnings, Foster’s & Billabong share the perception that Australian brands create fun and adventure. Global advertisers often use Australian accents in voice-overs because it conveys a sense of openness, friendliness, and humour.

Overall, banks are highly concentrated in the Top 40 as they account for over half of the total value in the ranking. Telcom (Telstra, Optus & Foxtel), Retail (Woolworths, Coles, Bunnings, & Westfield), and Energy (AGL, & Origin) round out the top 20 with just one brand each represented in Airlines (Qantas) and Alcohol (Foster’s) industries. Only two other sectors’ brands in Fast Foods and Food & Dairy made it into the most valuable Top 40 Brand Rankings. 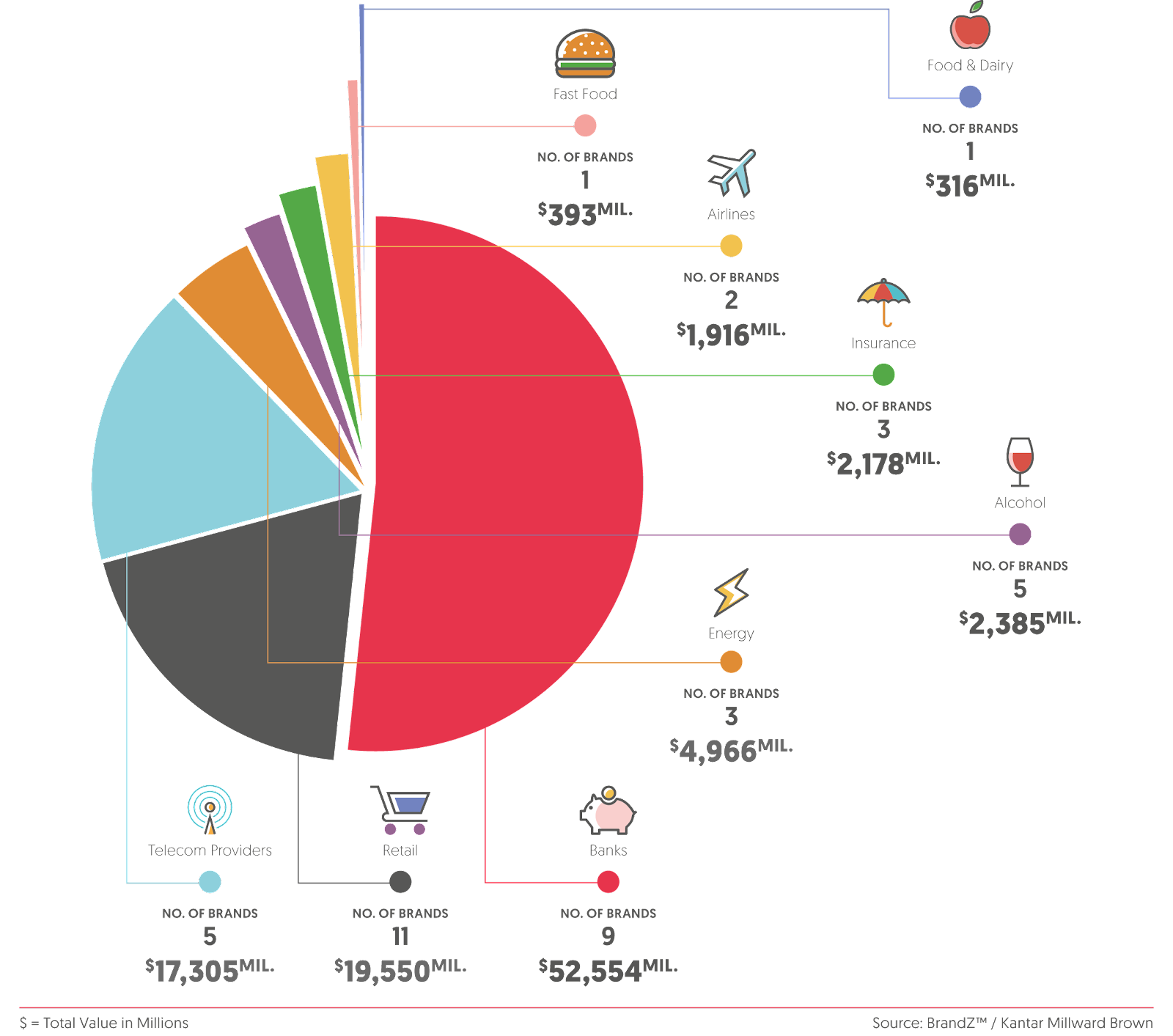 Globally, consumers have a strong perception of Australia. Relative to all other countries, Australia is ranked #5 in Quality of Life, and in 2018 it replaced the U.S. as #7 overall in the world in the Best Countries ranking, ahead of France, Netherlands, & Denmark. Prior to this report, Australia ranked first in Economic Stability, and second as the “happiest” country on Earth, Family Friendly, and third in terms of attractiveness of its job market. It remains to be seen how the recent banking crisis will impact Australia’s scores in economic stability.

In terms of corporate activity, companies reported Australia as the third best country to host a corporate HQ. At the same time, the ASX exchange is attracting companies from around the world to file IPOs and solicit investment, and although slightly down from its highs in early 2018, the exchange is near its historic highs.

The Australian Top 40 brands features a high concentration of value in the BrandZ Australian top 10 brands that outpaces nearly every other country (other than Spain) indicating there is a significant discrepancy in value between Australia’s top brands and all others.

The aggregate and average values of the Top 40 most valuable Australian brands are below those of other country’s brands. 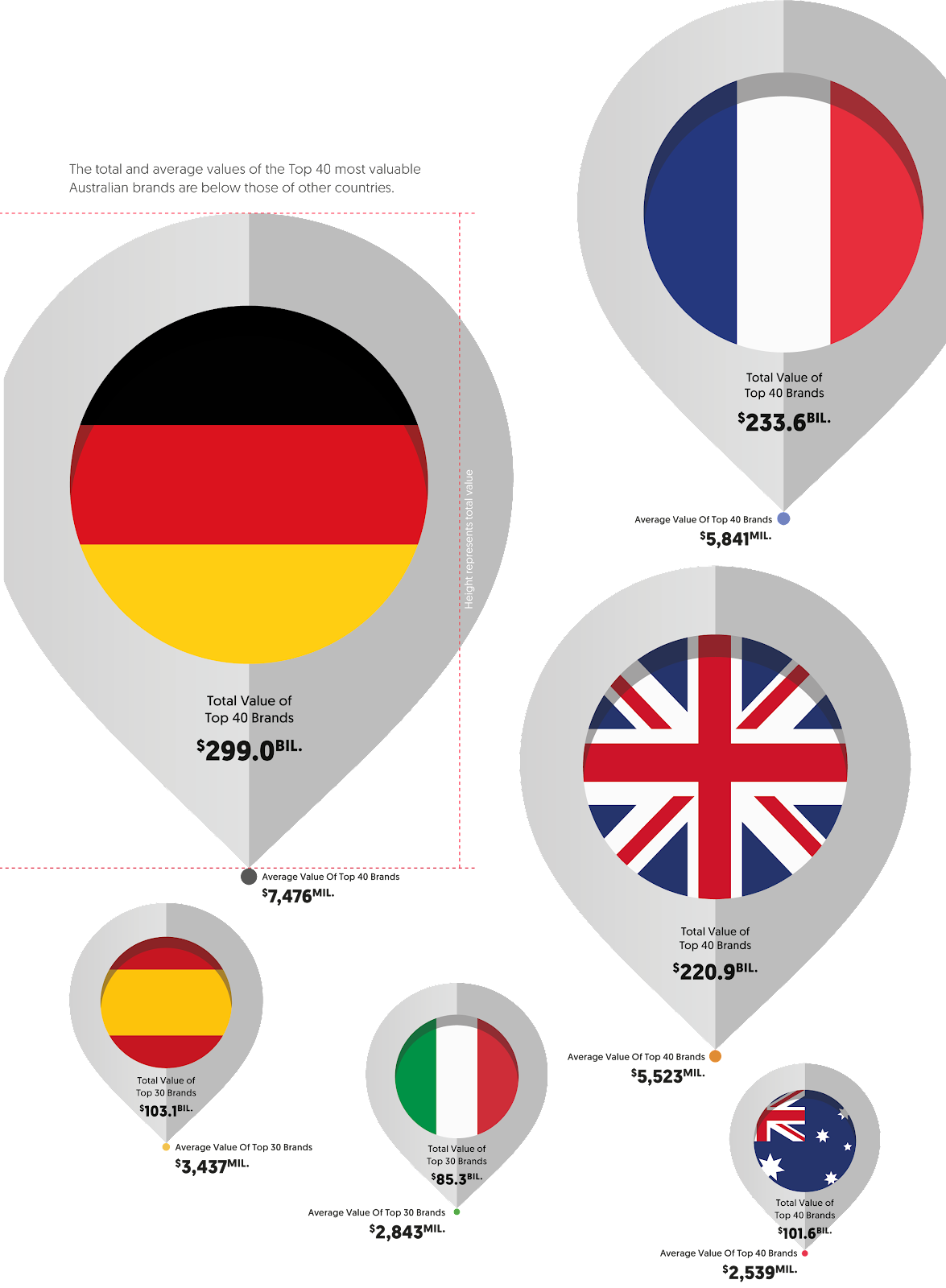 Brands in Australia’s largest industries (Banks, Retailers, & Telcos) report income mostly limited to local markets, well below global averages for competitors. Isolation may allow for effectively defending local markets, but that will only last while geographical isolation is defendable.  Competitors around the world have reduced country risk through global expansion and look to Australia as something of a last frontier to compete and disrupt. To survive, some Australian brands will need to protect their local turf while simultaneously expanding into other markets. This is clearly the next great challenge for Australian brands, those with transferability potential into foreign markets. 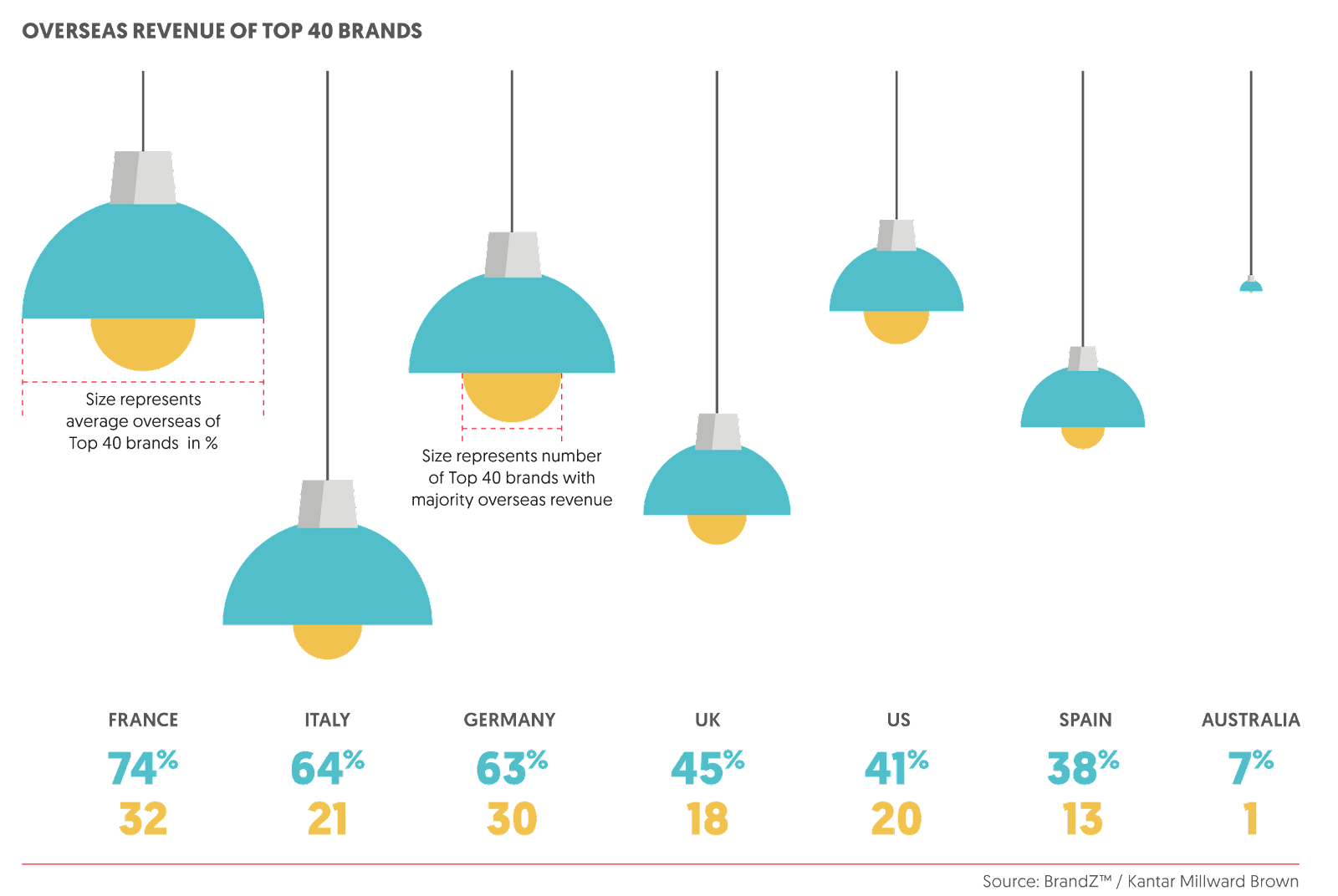 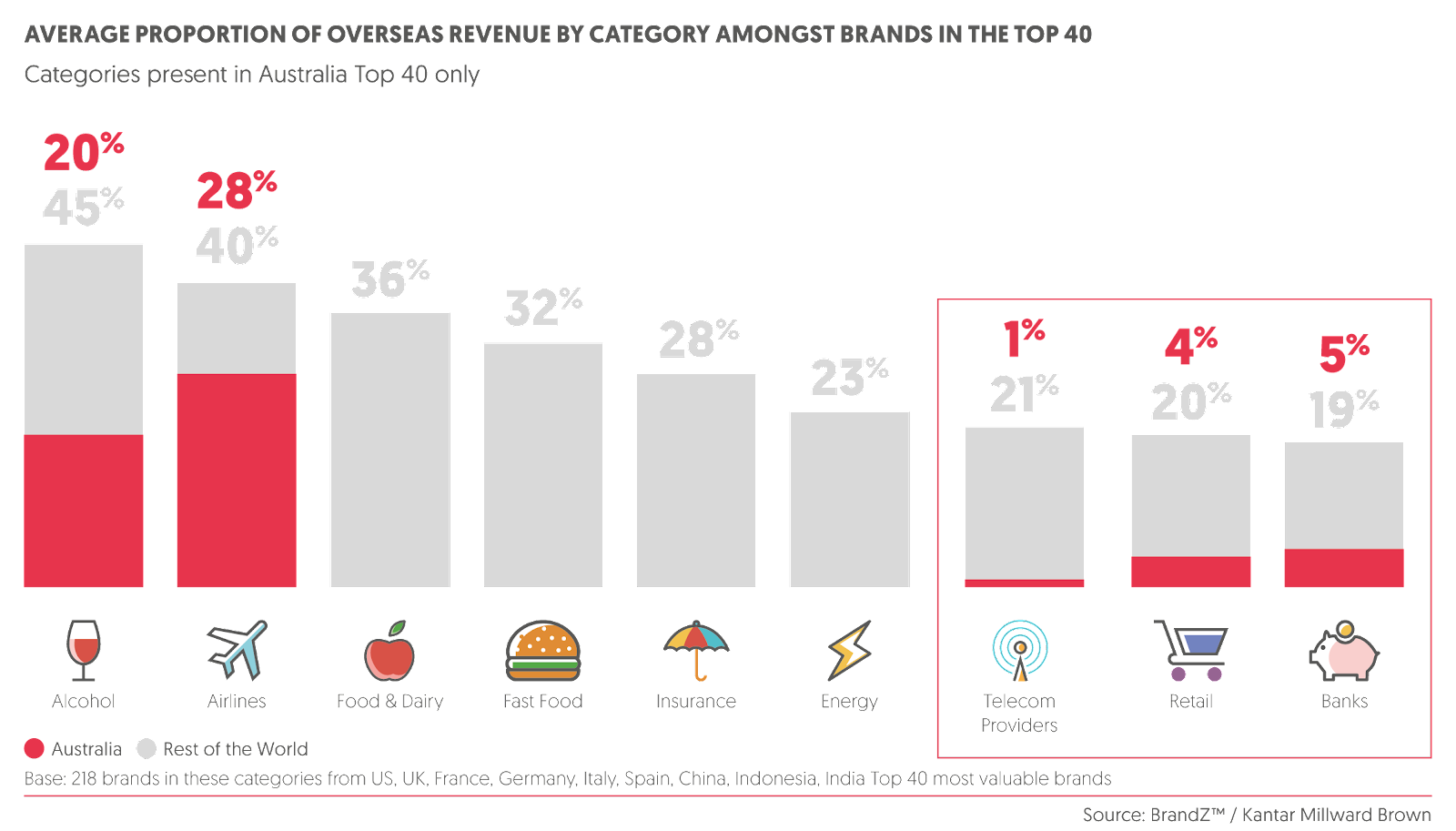