Ten years ago, people were migrating from rural China to major urban centers in search of better paying jobs. Today, the migratory pattern is reversing for a combination of reasons. As life in upper tier cities has become more abundant, it has also become more stressful and expensive.

Meanwhile, lower tier cities offer easier residency rules, new housing, and relocation incentives, along with the promise of improved prosperity balanced with a slower pace. One indicator of opportunity awaiting brands is online shopping penetration. Over 91 percent of Chinese netizens living in Tier 1 cities shop online. In Tiers 3 and 4 the only 57 percent shop online, according to GroupM.

Some of the most successful brands are developing new growth opportunities in lower tier markets. Meituan, the super app, reportedly has gained most of its new food deliver users in markets that are third tier and below. Didi Chuxing the ride-hailing service, is seeking to grow in lower tier cities.  Over 70 percent of Tmall’s new annual active users come from lower tier cities. A newcomer to the BrandZ China Top 100, 58.com, the online marketplace for classified ads, is developing a site called 58 Town to penetrate lower tier markets.

As brands look for success examples in lower tiers, Pinduoduo is a useful model. The e-commerce group buying platform, which began by serving lower tier consumers, has achieved national prominence as a rival to Alibaba and JD. Shoppers on Pinduoduo earn deeper discounts by expanding their shopping group. Because of this dynamic, Pinduoduo benefited from the communal mentality of lower tier consumers, and their habit of purchasing not just by themselves, but with family, friends, and neighbors. Pinduoduo measures much higher in Brand Power, a BrandZ™ measurement of brand equity, in Tier 3 cities than in higher tiers. 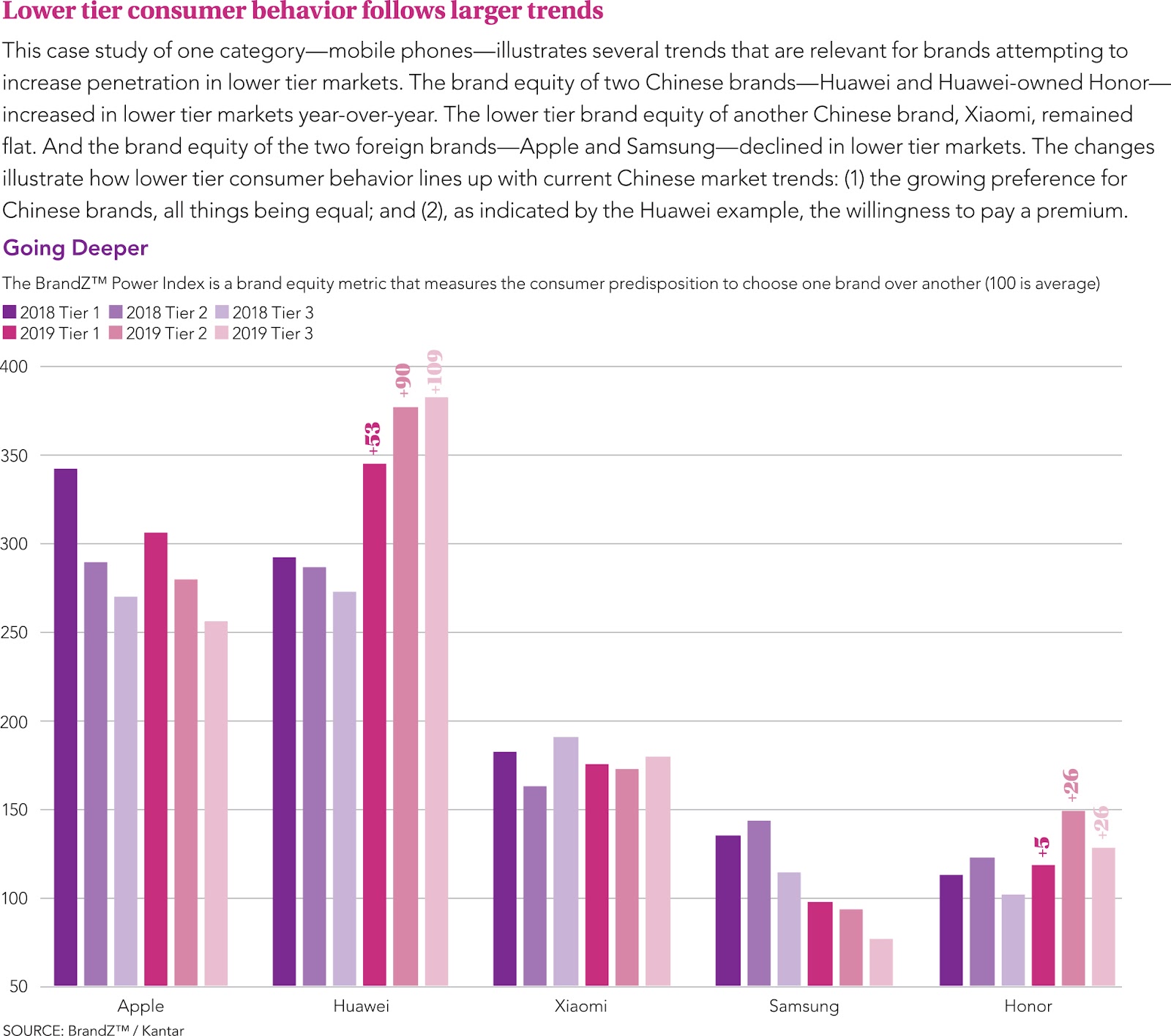 The city tier nomenclature no longer describes the reality of Chinese cities, as change outpaces the categories used to define China. Tier 1 cites—Beijing, Shanghai, Guangzhou, and Shenzhen—are east coast giants. The population of Shanghai is over 26 million. Tier 2 cities—such as Chengdu, Nanjing, Wuhan—often provincial capitals, are not

small. The population of Chengdu is around 9 million, the size of London. With around 2.5 million people, the Tier 3 city Huainan is around the size of Vancouver. These lower tier cities are growing quickly. Rather than thinking about Chinese cities as a hierarchy, it is more useful to see them as major urban centers.

The lower tier Chinese cities are growing quickly for several reasons, but mostly because people are migrating to them, attracted by greater affordability, easier residency requirements, and local relocation incentives. In some ways people in lower tier cities are similar to their peers in China’s coastal megalopolises. In the quest for a better life they have become sophisticated consumers with access to more products and services, a desire for more varied experiences, and a willingness for to pay a premium for quality or another meaningful difference. They are interested in all product categories. With improved infrastructure—high-speed rail links and more airports with international routes—lower tier consumers are traveling more domestically and abroad. At the same time, people in lower tiers generally prefer business transactions to be more relationship-based. To succeed in lower tier cities, it is vital to gain insight about how residents are the same as their peers on the coast and also different.

Reaching lower tier consumers and fulfilling their orders rapidly is now relatively easy. Alibaba, JD and the other major ecosystems are present in lower tier markets, both online and offline with distribution centers and small physical stores. Suning operates locations in small counties. Pinduoduo and 58.com began in the lower tiers and continue to have special strength in those markets. Reaching consumers and fulfilling their orders is just part of the requirements for brand success. The larger challenge is to not be lulled into complacency by the ease of setting up shop online and immediately reaching hundreds of millions of potential new customers. Lower tier markets are diverse, and messaging needs to be thoughtfully crafted and delivered, which requires extensive research, analysis, and creative execution.