Luxury: Brands refine experience both in stores and online

both in stores and online

The definition of luxury expanded, as younger consumer discovered new niche brands and older customers sought traditional luxury products, but also found satisfaction and expressed individuality with exclusive experiences as well as philanthropy. These dynamics, along with the rebound of China’s economy, drove the strong 28 percent increase in category value, following a 4 percent rise a year ago.

Democratization continued as brands tested the tension between exclusivity and accessibility, attempting to be as relevant as mass, but more exclusive. Streetwear influence increased and the “see now, buy now,” trend—eliminating the time lag from runway to store—gained momentum.

Brand experience, which is fundamental to luxury, was expressed innovatively in physical stores using artificial intelligence and virtual reality, and online brand experience improved, too, partly in response to challenges from smaller designer brands available on e-commerce because of the low barrier to entry.

Competitive pressure also impelled luxury leaders to focus more on data to understand market changes and identify potential customers, which is not a natural practice for brands with deep heritage and a base of core customers that they know well. But customer needs and desires changed with shifting societal trends. 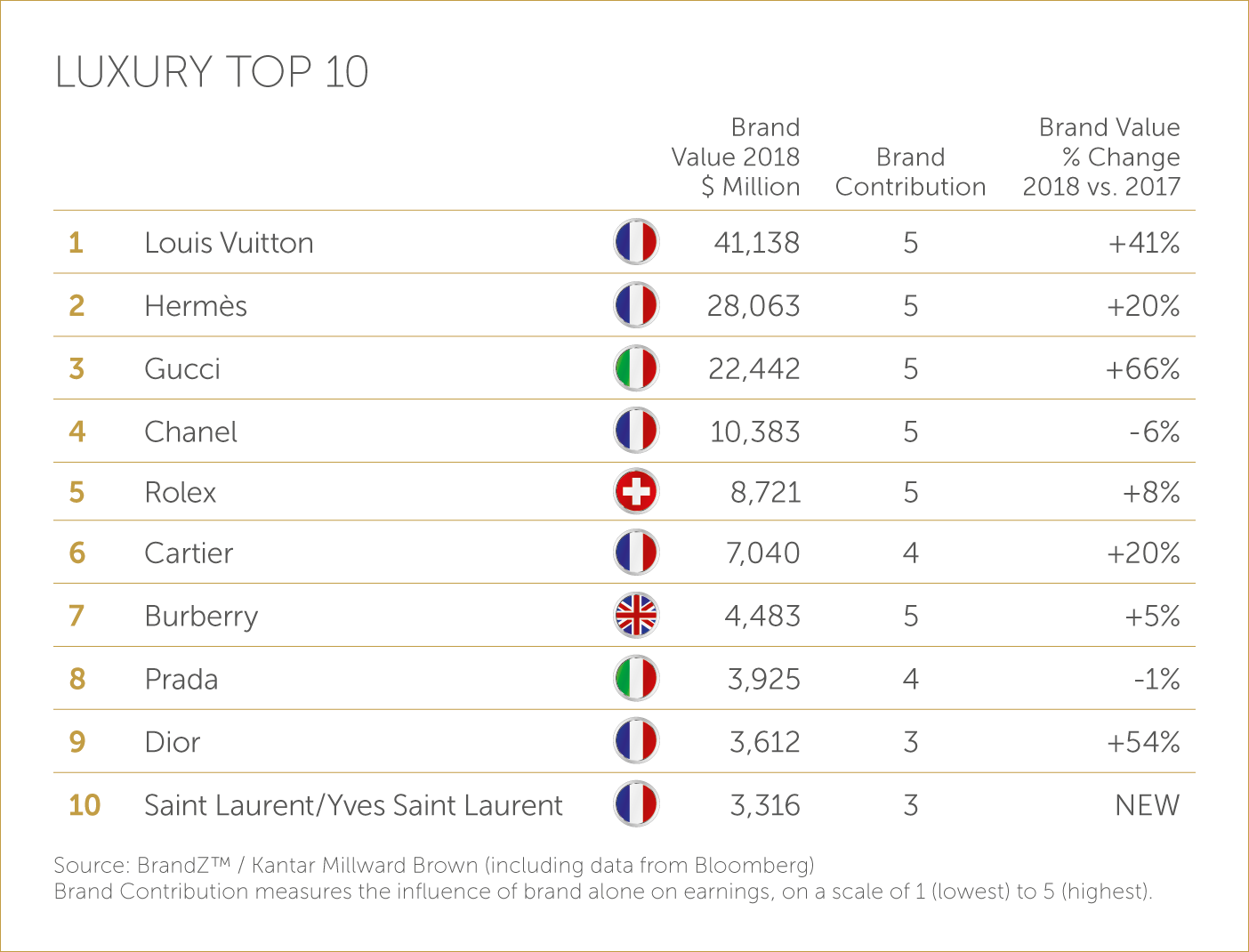 Individuals with sufficient money but limited time increasingly wanted to enjoy their wealth, not just with the accumulation of exclusive, expensive, and expertly crafted material items, but with time well spent, which is why many of the most valuable luxury makers branded hotels, including Hermès, Versace, and Dior. And for some wealthy consumers, adding another luxury car in the driveway was less satisfying emotionally—and as a status badge—than philanthropy.

Gucci led the BrandZ™ Luxury Top 10 in value growth. With its vibrant patterns and colors, Gucci captured the moment and influenced the category. Ubiquitous at red carpet galas, Gucci was endorsed by celebrities and the beneficiary of much buzz on social media. An unusual and popular social media influencer, Lil Miquela, is a computer-generated avatar who wears Gucci and other luxury brands.

Many brands, particularly, Louis Vuitton, Hermès, and Gucci organized promotions based on brand heritage stories. Louis Vuitton advanced many brand initiatives outside the store, including the Volez, Voguez, Voyagez exhibition of its vintage luggage collection, which it displayed in venues such as the former American Stock Exchange building in New York City’s financial district.

Brands paired heritage with innovation that appealed to contemporary tastes. Louis Vuitton also partnered with artist Jeff Koons who created a limited collection of paintings—reproductions of some of the great masters—that were printed on Louis Vuitton handbags. The brand continued its association with the streetwear brand Supreme, and it introduced bold animal prints.

Experiencing strong demand for its iconic bags and silk scarves, Hermès enjoyed a record profit year. The brand introduced a new website in North America and plans to introduce it in Europe and China. It also expects to open eight new stores in 2018, including locations in California and China. To reach a wider audience, including younger consumers, Hermès has partnered with Apple and designed a collection of watchbands for Apple Watch.

Chanel mixed its equestrian heritage and its classic look with a more futuristic interpretation of fashion at a pop-up club in New York created to promote the brand’s Boy·Friend watch collection. It also collaborated with Adidas on a pair of sneakers. Brand founder Coco Chanel was profiled in Good Night Stories for Little Girls, a best seller that profiles a hundred women role models from the arts, science, literature, and other disciplines. While the brand has effectively broadened its appeal to younger customers, the accessibility has also opened the brand to challenges from disruptive, pure-play e-commerce competition.

Rolex continued to do well in the watch sector, whose fortunes have been roughly inverse to the invention and global adoption of the smartphone. Rolex, a pioneer of sports marketing, continued to invest in long-term partnerships that sustain brand consistency. Rolex partnered with the Oscars, to connect it with the younger, movie-going generation and recall the appearance of Rolex watches in many well-known films.

Iconic met ironic in Burberry’s collaboration with streetwear designer Gosha Rubchinsky, who reinterpreted the brand’s classic plaid in fanciful, tradition-defying ways. In an augmented reality development with Apple’s ARKit, Burberry users can enhance their own social media images with Burberry-inspired artwork. Prada created throw-back collections that evoked the 90s, which continued to be at the center of a nostalgia trend. But slackening demand in Asia hurt results.

Dior has been especially active in China and is promoting its fine jewelry collection with a design point of view, an example of expressing the trend toward playfulness, even at the high end. And the brand engaged models such as A$AP Rocky and Rami Malek to underscore the street cred of its menswear. Yves Saint Laurent introduced online sales in China in a partnership involving Farfetch, a French e-commerce company, and JD.com. Yves Saint Laurent is part of Kering, which also owns Gucci and Bottega Veneta. To display the brand’s contributions to fashion and celebrate the cities that inspired them, Yves Saint Laurent opened museums in Paris and in Marrakesh.

The impact of Chinese consumers on luxury spending increased as the economy strengthened. Chinese consumers continued to spend on luxury while traveling, but luxury brands also equalized the overseas and China domestic prices for luxury items to encourage more spending at home, a goal of the Chinese government. Alibaba and JD.com, China’s largest e-commerce platforms, added luxury sites, called Luxury Pavilion and Toplife, respectively. In a country where most deliveries are made by men riding bicycles piled with packages, packages from JD.com’s Toplife will be delivered by a well-dressed young man wearing white gloves.

Personal values also drove the evolving definition of luxury, with more individuals deriving satisfaction not only from the material objects they collect and display, but also from the contributions they make to charities and other causes. This “competitive altruism” also helped propel the growth of a second-hand market for luxury goods. Consignment companies, like The RealReal, operate both online and physical stores, and illustrate the “circular economy,” a growing phenomenon.

Although the second-hand market can serve as an on-ramp to luxury for younger consumers, the availability of well-priced authentic luxury in almost-new rather than brand-new condition also potentially threatens traditional luxury brands. The traditional brands also face competition from new, smaller designers who can offer the craft and exclusivity of luxury, but at a lower price and sometimes with assurances of ethical supply chains, which the apparel brand Everlane calls “radical transparency.” 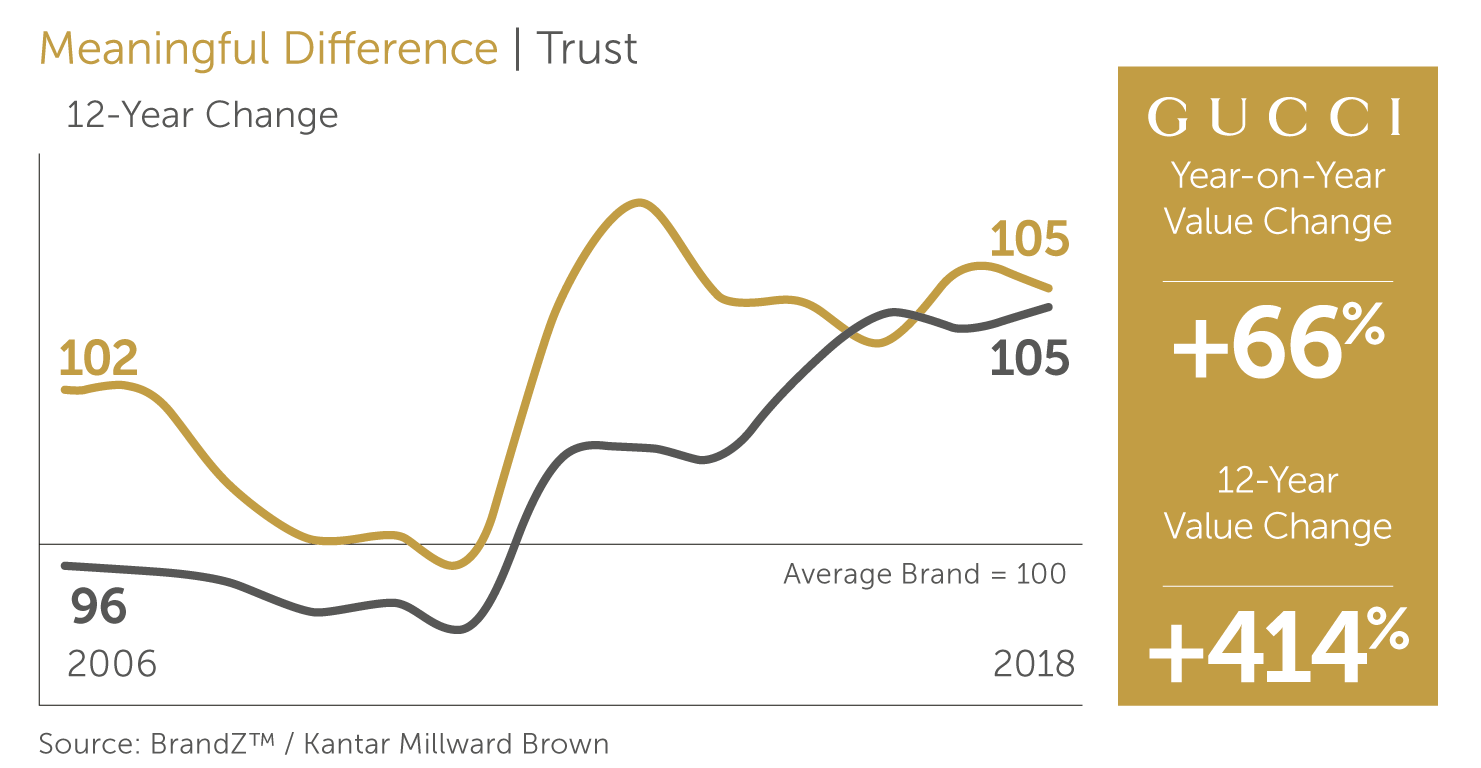